Last night’s amusement park rides wiped everyone out and we all slept in until close to 9am. Today is out last full day here at Alumafandango and we are hoping to attend as many events as we can fit it. 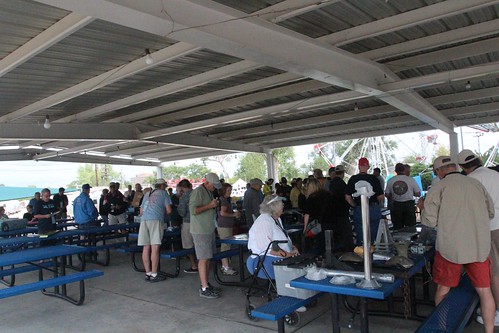 First thing in the morning, everyone had a swap meet to sell, give or trade goods with each other. The only thing we had to give away were kids clothes and there is no point in bringing them out with this crowd. 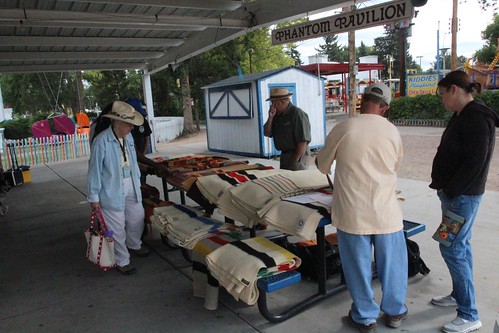 Of all of the stuff here, I was most interested in these National Park wool blankets. 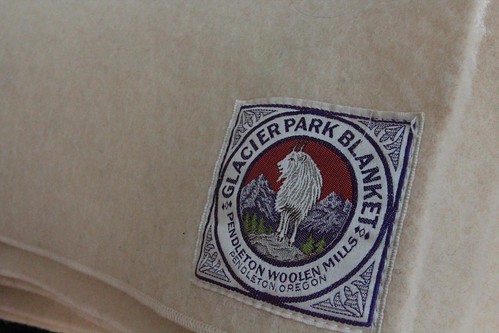 There were made by the Pendleton Company for all of the National Park stores and are made of 100% virgin wool. The only problem is, these were not for sale. It was just out on display for us to touch and see. What a tease! 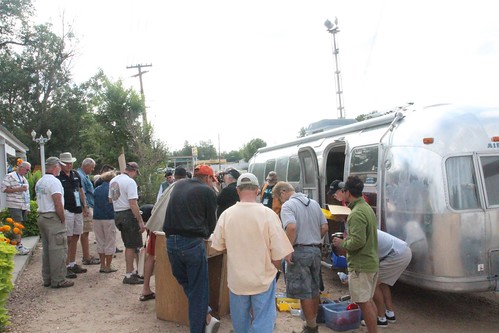 Timeless Travel Trailers also showed up with a trailer full of stuff. Most of it was vintage parts and accessories and they were a big hit with the vintage crowd. One day I will own a vintage trailer so I can finally get some real Airstream cred. 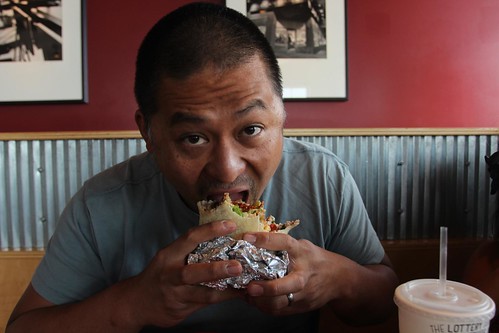 In between a couple of events, we headed out for a meal offsite. Since we are here with no sewer connection, we need to conserve our gray water capacity. Cooking and doing dishes is a sure fire way to fill up that tank. I found a Chipotle and had a burrito for the first time since we left California. It was awesome. 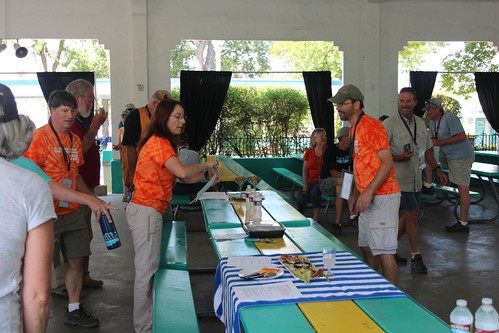 Meanwhile, the events continued back at Lakeside. The judging of the Aluminum Chef contest was underway. This is an event that anyone can participate it. You are given a list of ingredients and you are required to use them all, plus whichever other ones you choose, to make a dish from inside your Airstream’s kitchen. 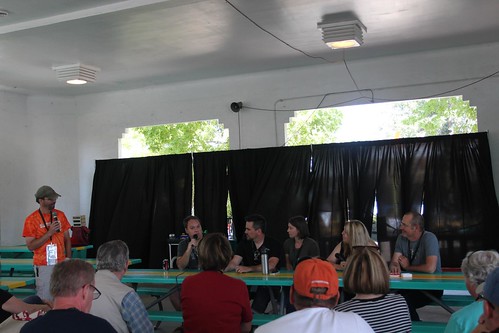 In the early afternoon, some of our fellow bloggers were invited to host a Blogger’s Round-table discussion. We did not know about this event until we got here so we showed up to lend them some of our moral support. Brett, who was the co-event producer who puts on Alumafandango was surprised that we were not on the panel. But it is probably best as our kids could not be trusted to sit and watch a bunch of grownups talk about websites.

As it turns out, more than half of the attendees of this session already had blogs of their own. It turned the originally planned how-to-start-a-blog discussion to more of a sharing of our collective blogging experiences. 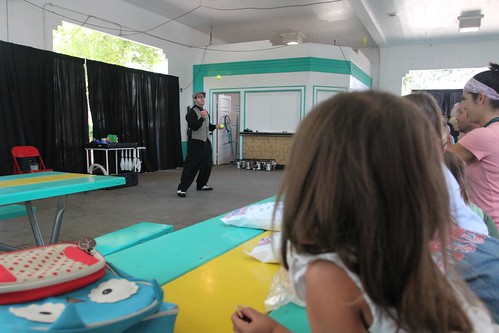 The most exciting part of the day for the girls was the comedic juggler, Reid Belstock. He is a real-life graduate of the Ringling Brother’s Clown School and has been juggling and performing since the age of 15. He dragged out a trunk full of goodies and put on a really amazing show. 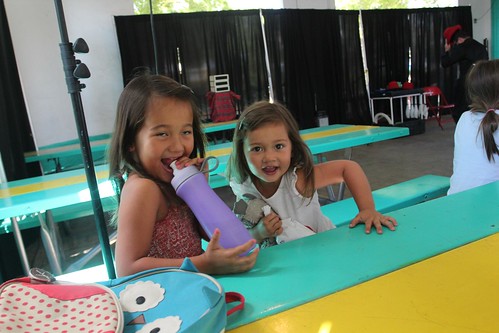 If you want to get a glimpse of some of the amazing things Reid can do, take a look at the embedded video on the bottom of this post. 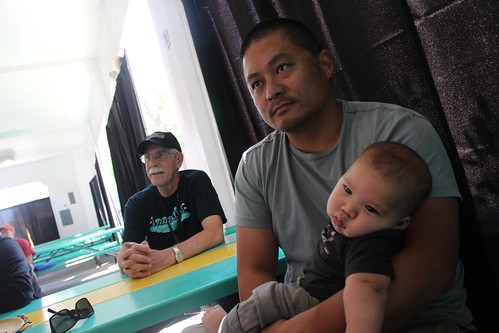 Even Luka woke up and see what the hubbub was all about. 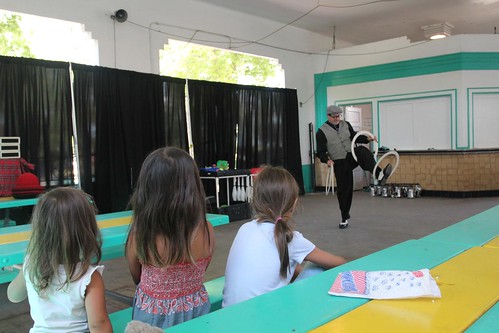 That’s right, Ava, he is hula hooping with his legs. Time to start practicing. 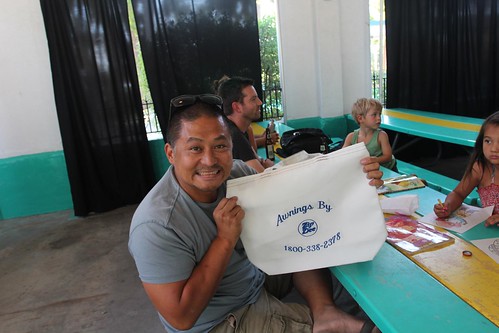 We have attended the happy hours daily at 4pm and attendees names are randomly drawn from a bowl and prizes are given away. For 5 days, we have not gotten a single prize while all of our new friends, many who did not always attend the happy hours, have had their names called. Just as I was convinced that our names were not in the bowl, I became the proud owner of a Zip-Dee tote bag. 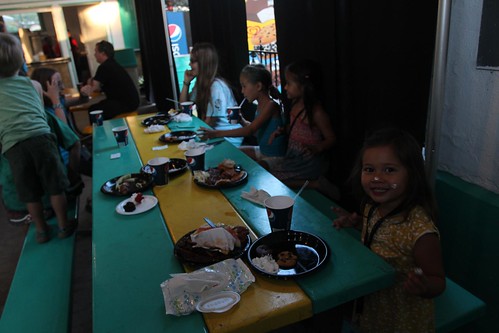 Our last night here included a catered meal that gave all of us a chance to eat together one last time. 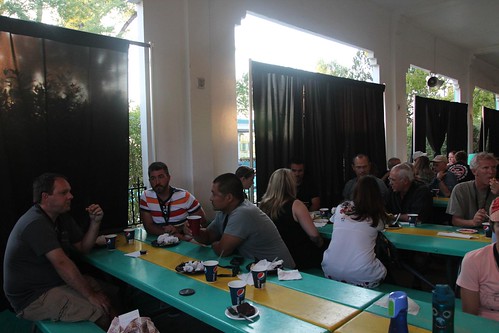 We chatted with our new friends some more and hope to run into each other again else where on the road. 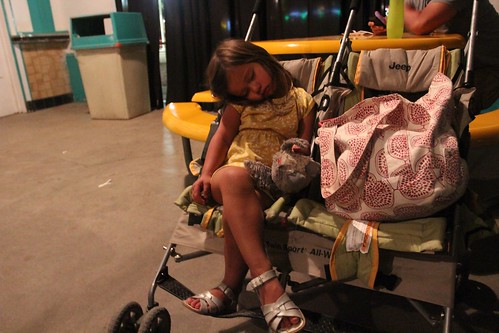 Tomorrow is going to be crazy. More than 100 trailers are going to attempt to hitch up and leave all at the same time. I am afraid it will get pretty ugly.

You guys are too cool! I am super duper jealous of your time Alumafandango! Way to be pioneers of the first Alumafandango! It makes me want to go! Love your blog and look forward to reading it! Thanks for sharing your awesome times! (Side note.. My favorite video and pics are those of your adorable kids and the airstream! Your kids personalities remind me of my own.. SPUNKY! 🙂