Day 8: Hitched up for an Airstream play date.

We have big plans today. It is our checkout day at Cactus Country RV Resort and time for us to move on to the next stop. But before we can get back on the road, we have a full day booked. 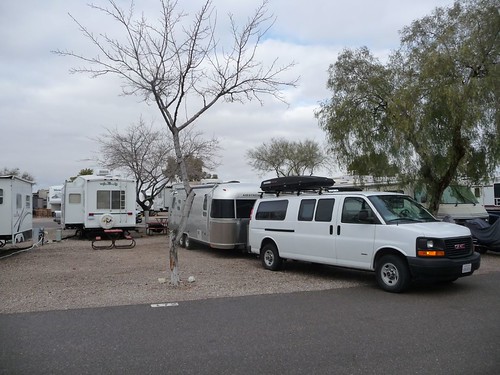 We packed up a lot of our gear the previous night before heading to bed so we could try to checkout of Cactus Country by 8AM. If you know how these plans typically go, you would agree that we did pretty well by finally pulling out of there at 9:30.

If you read our Day 5 post, you would have known that we are proud owners of a new-to-us Hensley Arrow hitch thanks to our friend Rich. We had been hauling this thing around on the floor of the van for the last couple of days trying to decide what to do with it. Our current hitch is nothing special but it does its job as far as I am concerned. The Hensley on the other hand is the Cadillac of all trailer hitches. Its patented design basically makes towing a travel trailer feel like towing a 5th wheel by geometrically moving the pivot point above the rear axle. If you want to know in more detail how it does that, google it. I will not be able to do justice by trying to explain its working principles what many people have already done online. 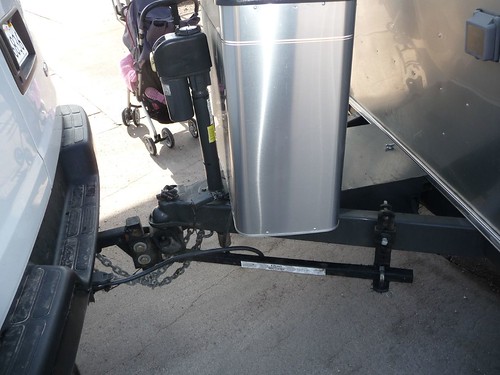 Since our van has a very long wheel base, towing the 25 footer with a basic load distribution hitch as we have for the last year isn’t really a chore. We haven’t noticed a lot of sway and never really had the itch to upgrade. Especially to a $3000 Hensley Arrow. Well, that all changed when the deal-of-the-century came around on this used hitch and we snatched it for an unbelievable price. By the way, I am suppose to be chanting this whenever this hitch is mentioned: “I love Rich Luhr. Rich Luhr is the greatest.”

At first we thought, ‘Umm, should we try to fix something that ain’t broke?‘ Afterall, we had planned on doing this trip with the existing hitch and it was no where up on our list of to-dos. Even though we bought the hitch, we were still trying to decide if we should find an installer or wait until after the trip to get it done. It would take some time to get use to the differences in towing, hitching/unhitching and maintenance between 2 completely different styles of hitches. Our options for not installing it until later was to either leave it at Rich’s house or ship it back to our house or a friend’s house back in Ventura. Neither of those were ideal. If we left it in Tucson, we are committing ourselves to come back through on the return leg. Shipping it back was going to be expensive. Probably just as much as paying to have it installed being that it weighs over 100 lbs and very unwieldy. 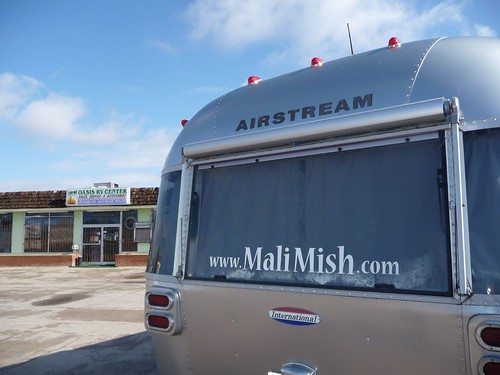 On Rich’s recommendation, we drove it down the street to Oasis RV in Tucson who specializes in Airstream service and repair as well as Hensley Arrow sales and install. Part of the reason why installation might be out of the question is the way Hensley hitches are installed. Unlike a traditional hitch bracket that allows height adjustment, the Hensley hitch uses a coupling steel rod called ‘the Stinger’ that mates the tow vehicle’s receiver with the hitch. There is no adjusting the height of the Stinger. If your vehicle is not aligned correctly for the Stinger that you have, you are to ship the part back and they will send you a replacement free of charge. Only thing you pay is shipping both ways. We could not wait around for that since it might take weeks so if the Stinger doesn’t fit, we are out of luck.

It was our lucky day. The guys at Oasis RV were very helpful and professional. They quoted us about 2 hours for the install and we could just drop it off there in the morning and it would be done before noon. We left her there in good hands and said our final good byes to the old hitch and walked across the street to look for some morning grub. 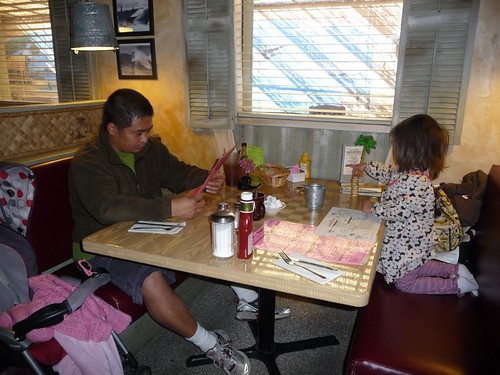 We found ourselves at a small little local restaurant called Sunny Daze Cafe whose claim to fame are these little donut holes called Sunny Puffs. We each got a sample tasting of one and it was delicious. To best describe it I would have to say that it tastes like any other donut hole that you have ever tasted except the oil they used to fry these dough balls in are probably the same one used to fry everything else on the menu. It might sound disgusting but it gave it a distinct flavor unlike any other donut hole I have ever had. In a good way. 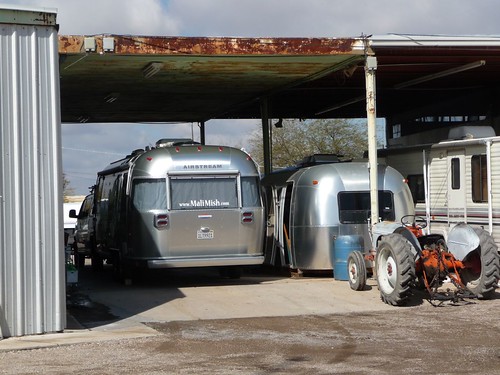 Back at Oasis RV, they were nearly complete with the install. Only some small bolts and pins were missing from the hitch and nothing was damaged aside from the regular wear you would expect from a used hitch. I love how there is just a body of an Airstream sitting on wooden blocks right there in the service bay. It is used as a lunch room for the people who work there. I am sure there is an interesting story behind how it got there but I was too excited to learn about my new hitch to ask. 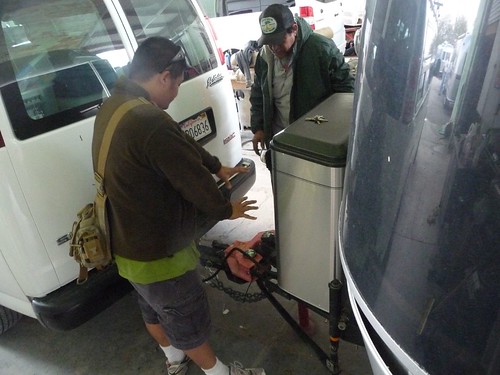 “Do you think I can learn about this thing by just putting my hands over it to absorb its aura?”

Meanwhile in the parts store, Ava was having a field day checking out all of the Airstream paraphernalia she can con us into buying. 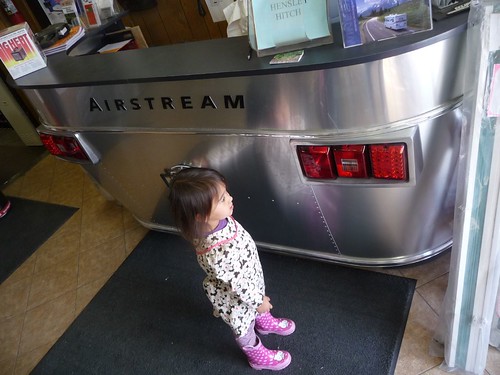 “Mama! Where is the rest of this Airstream? I think it’s broken!” 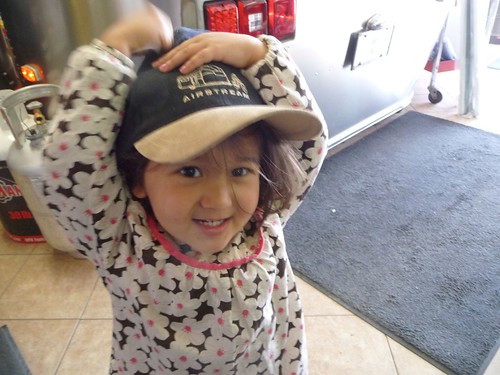 “Yeah Ava! The hat fits! But please put it back, we are NOT buying that. Do you think money grow on trees!?!?”

I know, we are starting to sounds just like our parents. 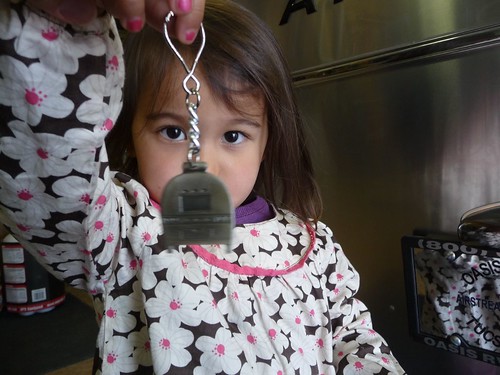 We did get suckered into paying $8 for this Airstream key chain. Now we are going to have to make a little malimish.com decal to put in the back window of it. 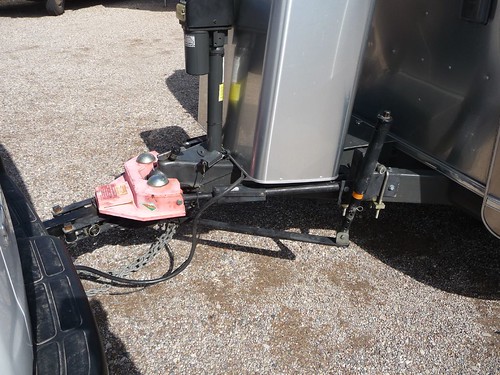 And here she is. All ready for her closeup. I went for a little test drive with the installer and it went very well. One of the immediate benefits that I saw is that it tracks the van much better around turns. I now don’t have to swing out as far into the intersection just to avoid running the Airstream tires on to a curb. I don’t know if it’s psychological or not but the van now feels lighter on its feet. Certainly the better weight distribution could be a factor for that. But enough with the hitch talk. Now that we are ready to roll again, we’ve got a 1PM date with some Airstreamers.

Back in July of 2009, a young couple with 2 kids decided to skip town after the birth of their new baby girl and do some road tripping. They bought an Airstream and pack it full with gear and left from one coast and headed for the next. 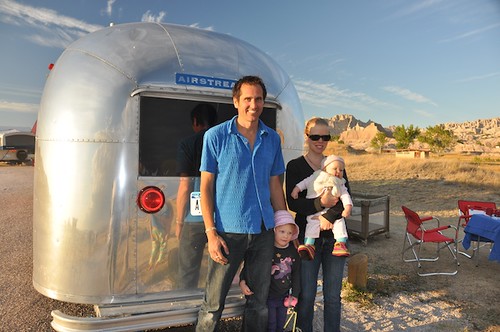 Doesn’t that sound familiar? Obviously we are not the only ones with that idea and we are thrilled to find other like minded people on this trip. Actually, Claire and Daniel along with their daughters Sophia and Lulu are from England and they are doing it with a vintage Airstream Caravel starting out from the New York. What’s really astonishing is that the Caravel is only a 17 footer with no gray water tank. We had been corresponding online since before we left Ventura. As a matter of fact, Rich initially ran into them in Badlands National Park in September on their way out towards California. Through the Airstream Life Website, Claire found out about us and we have been looking for a time and place to meet up.

One of the problem with traveling with a toddler is they don’t get to find other kids to play with. She has not quite yet gotten the concept of a road trip because she still asks us nearly every day if she could go play with her friend Grace back at home. So any opportunity we have at getting her a playmate close to her age, we jump at it. What is even better is for at least the next few days, we are headed in the same direction so expect to see more of them in our posts to come.

Thanks to Emma for being such as terrific host by entertaining 2 little girls who are less than half of her age.

Also a great big thanks for Rich and Eleanor for hosting us once again during out visit here in Tucson. We owe you big time!!!!

We definitely had a good experience at Oasis RV when we were through there last year (http://www.casarodante.org/2009/04/14/arizona-part-ii/). We missed out on the courtesy parking thought, maybe next time.

[…] deal with meeting new friends and how to develop a relationship. Before this morning, they had only met and played with each other under the supervision of Rich (of Airstream Life) and Eleanor’s daughter […]