Today is Halloween and we have a full schedule so we started the day off right with breakfast… at breakfast time. I know! It was a miracle that we were up and eating out before lunchtime. Probably because we left Dan at home, still snoring away after a late night of working. Carrie took us to a Louisville staple, Wagner’s Pharmacy. 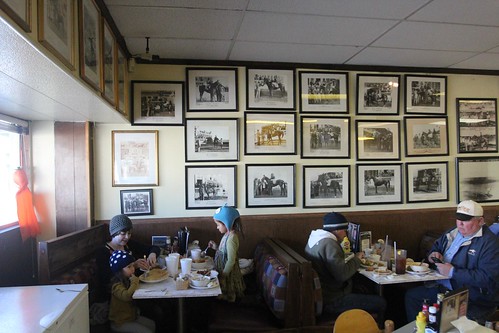 Wagner’s Pharmacy is located right across the street from Churchill Downs. It is where the jockeys come to eat and where dudes hang out all day with racing paper in their hands, eyes on the tv and voices carrying on about this horse and that horse. We didn’t partake in any betting but we did find out which horses won in the year we were born. A must while you are in Kentucky. In my year, the winner was “Foolish Pleasure”. Haha. For Ava it was “Street Sense”, for Mila it was “Mine that Bird”, and for Luka it was “I’ll have another”. 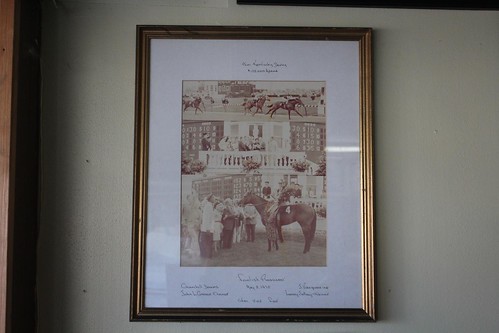 The food there was simple and good. Mila ordered one HUGE pancake and actually demolished more than half. One guy sitting at the counter of the restaurant was smiling at Luka during breakfast. He commented that there is NO WAY Luka will grow up to be a jockey. He was way too big already. True that, horse betting guy. And Luka has the chins to prove it. 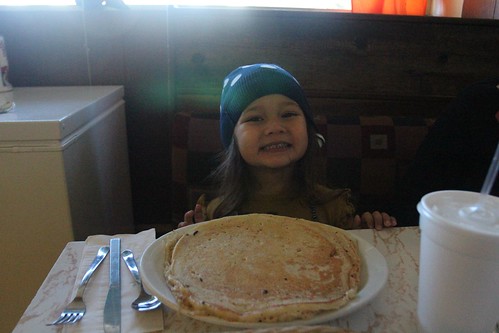 After breakfast, we drove back to Carrie’s house to pick up our sleeping beauty so he can join us on our next outing, Cave Hill Cemetery. Yes, we like to visit old cemeteries. Is that weird? At least we have Halloween as a good excuse today.

The history of this place is amazing. There is actually a cave on the property that is off limits to visitors that sits near a spring. The land here started off as a rural piece of land that had the very first brick house built in Louisville circa 1788. Then in the 1830s it was bought by the city for railroad expansion but the railroad that was suppose to run across this land had other plans. In 1848, long before the era of large municipal parks, the city of Louisville built a garden-style cemetery which was popular at that time and promoted it as a green oasis and recreation destination. The cemetery has over 500 types of trees and shrubs, many of them labeled. Garden-style cemeteries in Louisville largely ended with the opening of Cherokee Park in 1892, which we visited a few days ago. 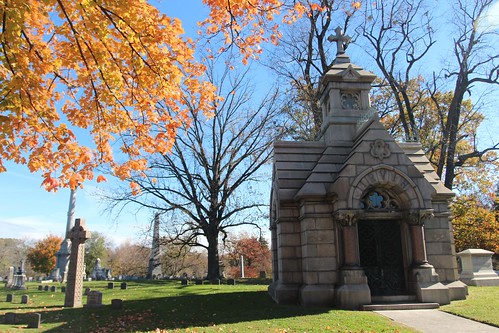 The beauty of this place is that it is free. Who needs to pay to go to the botanical gardens when the trees here are the perfect shade of autumn. Seriously, look at these trees. This is not photshopped. Au naturale!! 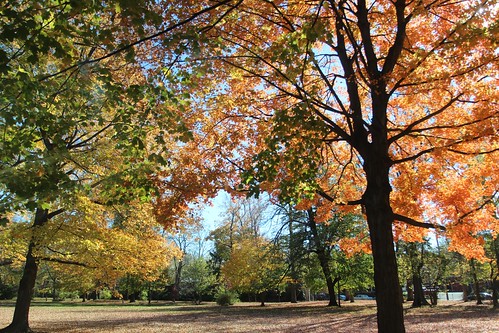 Our first stop at Cave Hill was the duck pond. As soon as we got out of the car, the ducks and geese started waddling towards like zombies. Hungry zombies. 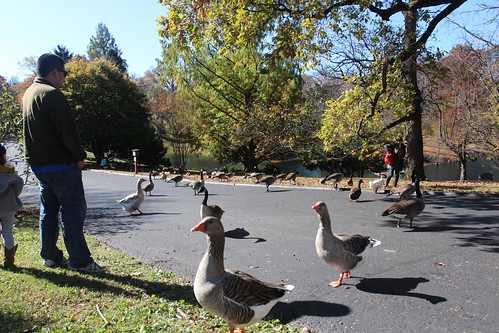 It was cute at first but then it got a little too much for the girls, especially Mila. I guess when 50 geese honk at your eye level, it isn’t too much fun. 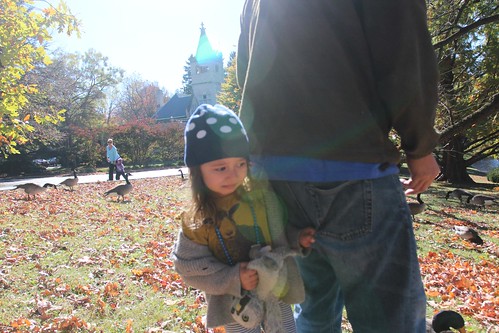 She hid behind Dan during most of the lake visit until she discovered the magical power of sticks. Holding a stick in her hand like a sword to be exact. I guess quack quack got the point and left her alone for the most part. 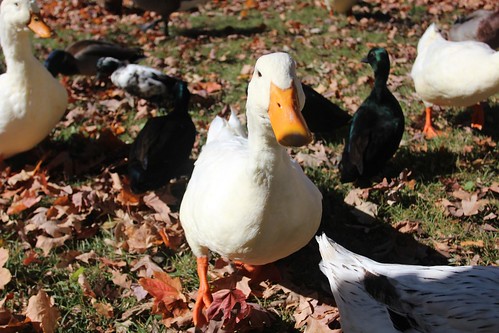 The lake in Cave Hill is a beautiful turquoise color. It was so unbelievable in color that it looked fake. But there is no way it was fake. If it was dyed that color, I would imagine these swan butts would look dip-dyed. Haha. (Yes, I just cracked myself up.) 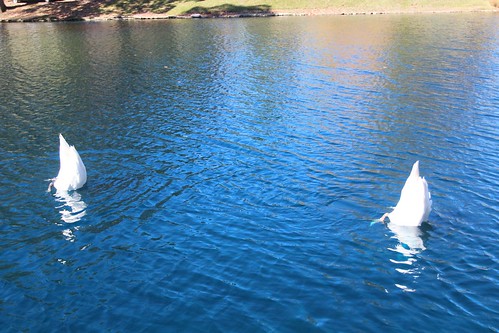 Cave Hill Cemetery is a 296-acre Victorian era National Cemetery and the most famous “resident” is Colonel Harland Sanders of Kentucky Fried Chicken fame. Yes, he was a real guy. 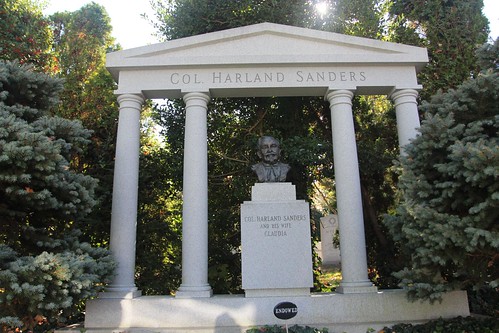 Born in 1890 and died in 1980, he is buried in his characteristic white suit and black western string tie, next to his wife, Claudia Sanders. 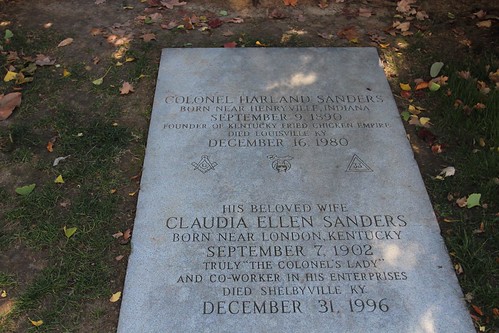 Looks like the namesake of Joe Ley Antiques is buried here. I tried to look online for info on him but my search came up empty. Carrie offered her cemetery map to me and I declined because I said I would just ‘look online’. I am so dumb. 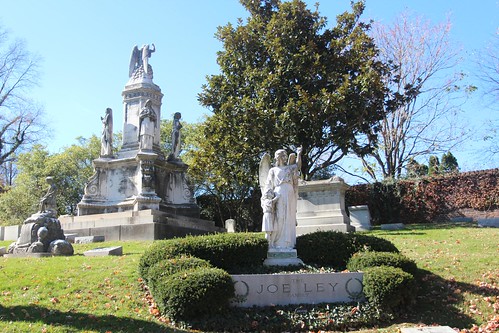 There was one couple also buried here that built a replica of Marie Antoinette’s palace in Versailles, France. The tried to get the look of famous pink marble she used. Here are some pictures for comparison from our visit to the actual palace from European adventure last summer. Which reminds me… we never finished blogging about Croatia. Doh! 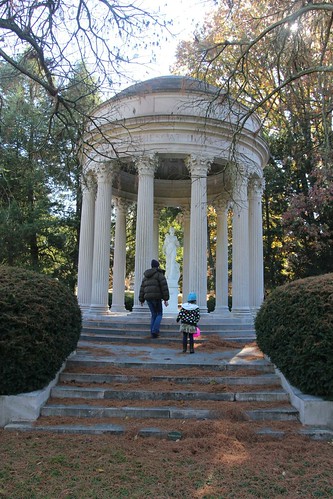 There is also a large section of the cemetery that holds Union soldiers, since Kentucky was a stronghold for the Union during the Civil War. The large rock this picture is The Union Monument. It was built in 1914 from granite and honors unknown soldiers who fought in the Union during the American Civil War. The inscription on it reads: “In Memory of Unknown Union Soldiers in This Cemetery 1861-1865 Erected by Kentucky Comrades—1914”. The cemetery is also home to 37 Confederate grave sites, as well. 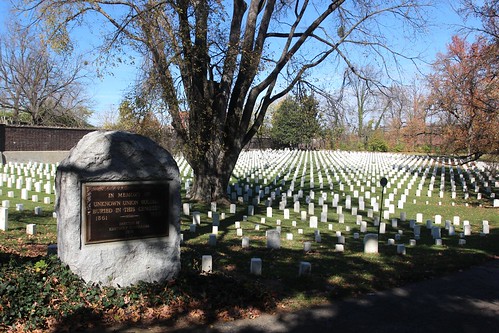 The girls have been asking when Halloween is since November 1st of last year. Today is the day, ladies! Ava went as Sally the Rag Doll, Mila was a little bumblebee and Luka was a dragon. It was so nice continue our tradition of taking pictures in front of a house for Halloween, even though it wasn’t our house. 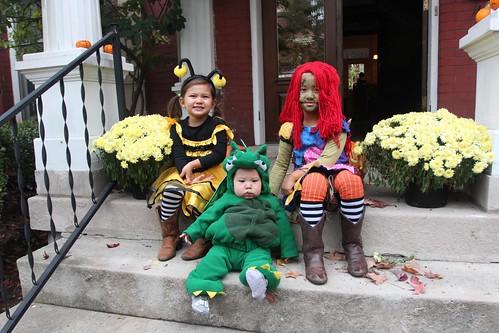 The kids insisted we ALL dress up so Dan was Jack Skelington and I was a witch. 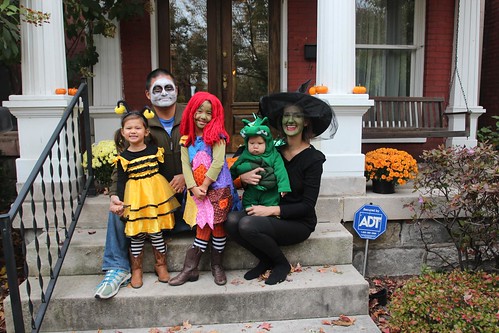 And Carrie went as a scary vampire! 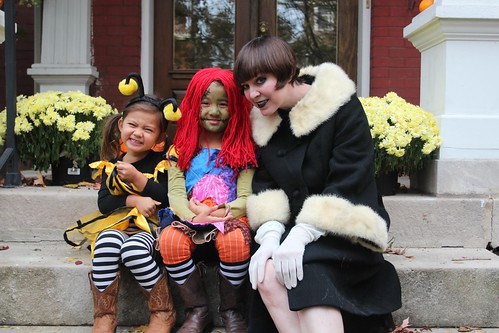 And since this is Luka’s very first Halloween, he got one alone picture. And why wasn’t he alone on the house steps outside? Because he can’t sit by himself yet. He needs the wall to help prop him up. 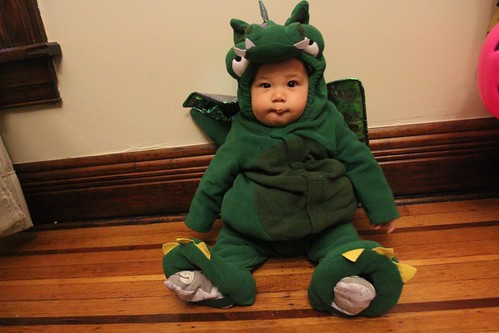 Then hand in hand, the girls skipped down the street with pink pumpkins in their hands. 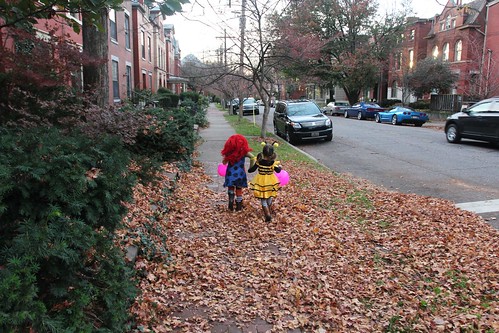 We decided to take the kids trick or treating at St. James Court in Old Louisville. It is the most beautiful part of Louisville surrounded by old, stately Victorian homes. I don’t think we could have planned a better neighborhood to be in at Halloween even if we tried. 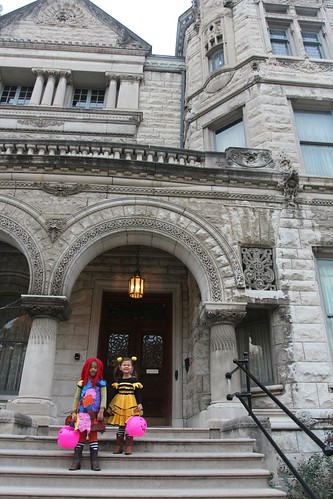 Look at the first house the girls trick or treated at! Are you kidding me?!?! I think this might be my favorite house on the block. 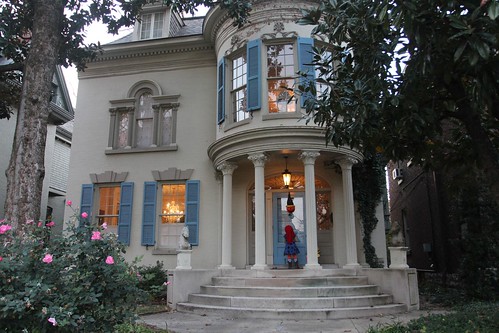 This one ain’t too shabby either! 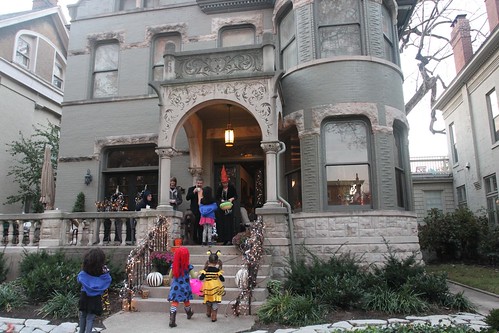 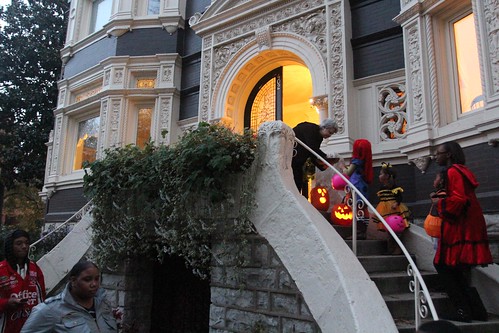 We ended the night at Carrie’s friend’s house. The girls were planning to help hand out candy here but St. James Court is so popular, they ran out of candy and had to turn off the porch light as we hid and whispered inside. But the girls’ disappointment didn’t last to long as they started to devour their pink pumpkin stash. 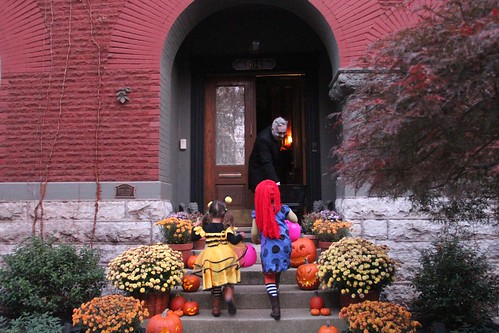 And when we got back to the house, Ava asked why everyone kept calling her Raggedy Ann, instead of Sally the rag Doll. Haha. 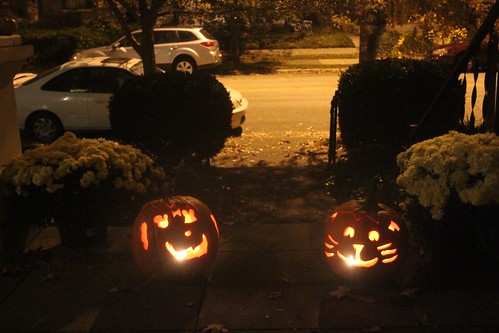