Last night we spent the night at a Walmart in Traverse City. It is the first night of boondocking since we replaced our batteries in Grand Rapids just before we headed to Grand Haven. I also was able to charge up our pair of old batteries while we were plugged into power in Ludington and connected them via the umbilical cord for extra amp hours. They worked great. It is the first time for us to wake up in the morning after running the furnace off and on all night and still be in the green on the monitors. As we start to head south, we will be able to last much longer without having to run the furnace and get better charge from our solar panels. 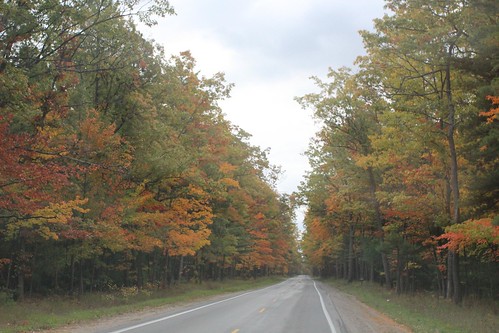 We regretfully decided to leave Traverse City after waking up and doing a quick drive around the town. There are a lot of things to see here and that is actually the reason why we decided to go. There are beaches, wineries, parks and downtowns that begged to be toured but we would need to allocate close to a week to be able to do it all. Hopefully there will be another trip sometime down the road that will bring us back here for a proper visit. 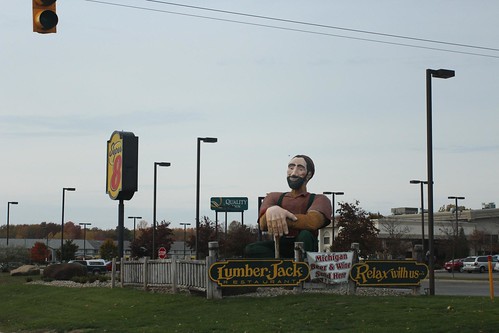 From Traverse City, we decided to head across the lower peninsula and visit the eastern part of the state. Whereas the western shoreline lies along Lake Michigan, the eastern shore is mostly along Lake Huron with a short stretch of Lake Erie near the southern border. This area is known for its long history of lumber and milling trade. The fictional axe-wielding giant Paul Bunyan is said to have been based on a real life lumber jack that frequented this area named Fabian Fournier, also know as Saginaw Joe. 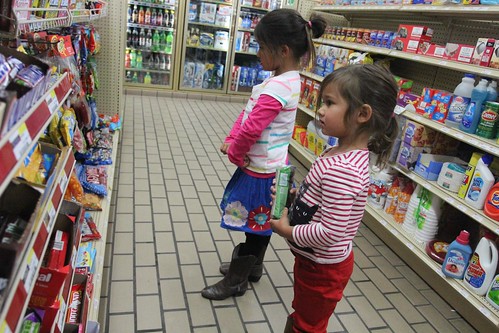 The drive today is the longest one we have done in a long time. Even though it was only around 150 miles, that is compared to the mostly sub-100 mile transit days since we got to Minnesota. The girls got to pick out a treat at the gas station for behaving so well in the car while listening to their Laura Ingalls Wilder audio books. 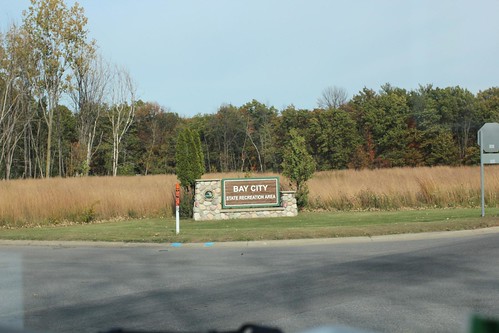 We arrived at Bay City which is located at the base of Saginaw Bay. That is, for those of you needing a more colloquial reference, the web of the Michigan hand between the thumb and the index finger. 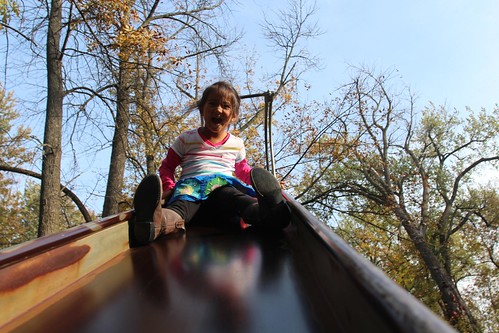 There is a campground here at Bay City State Recreation Area, pretty nice one too, but we are not going to spend the night there. Since we are only staying here for one night and leaving tomorrow, we will boondock another night at the Walmart just down the road. What we will do is take advantage of our Michigan State Park Recreation Passport we purchased back in Grand Haven and spend a nice autumn afternoon here by the bay. 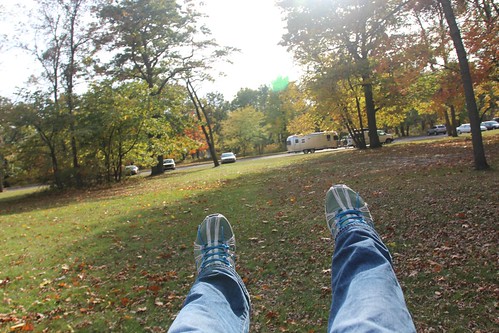 There was hardly anyone here and we had plenty of spaces to choose from. I picked a spot that got us the most sun so we can get some more amp hours while we frolicked. Who says playgrounds are only for kids? 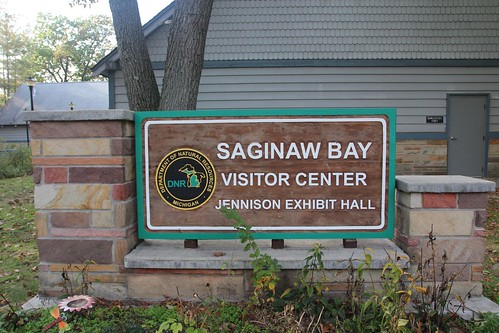 We took another opportunity today at the visitor center for a little homeschooling. After all, it is a weekday, we can’t let her stay at the playground all day. 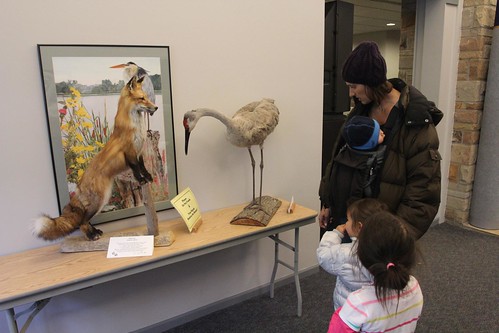 The name Saginaw Bay is derived from an indigenous word from Cananda. It means ‘to flow out’. They didn’t know as much as the time but Saginaw bay is the largest drainage basin in the entire state of Michigan. About 15% of the land mass drains into this watershed. 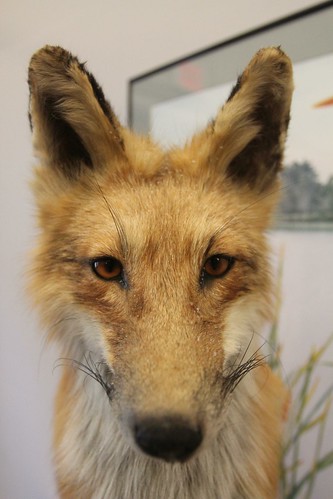 With that much water, there is an abundance of wildlife here. Some of which have been preserved post-mortem for your enjoyment here at the Saginaw Bay Visitor’s Center. 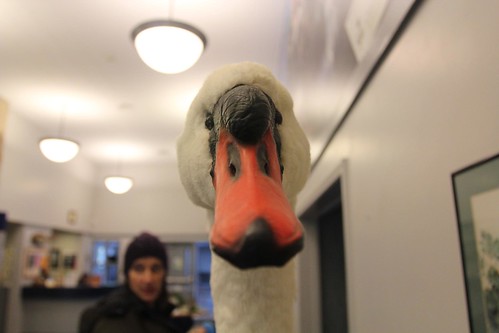 Looking at this guy somehow makes me think about getting supplemental insurance and Gilbert Gottfried. 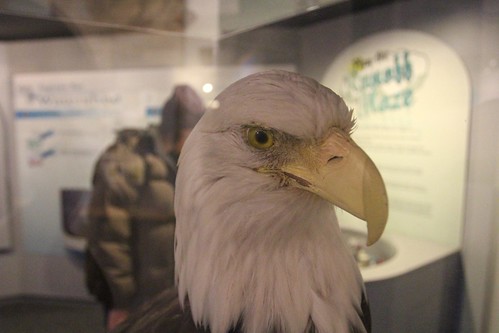 There is even a taxidermy bald eagle here. 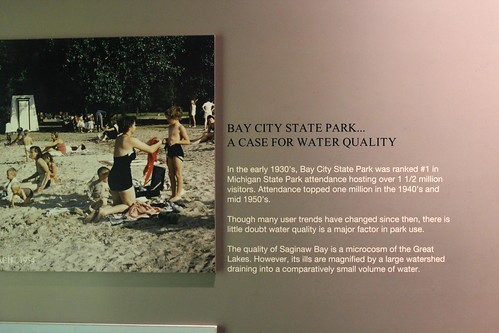 The watershed also causes some serious water contamination issues for Saginaw Bay. Since the 1930s, water pollution has been a major problem here. With so much waste water being drained into the bay, the water quality has progressively gotten worse. This park was once the most popular state park in the entire state but as it peaked in the 1940s and 50s, it has seen a steady decline. 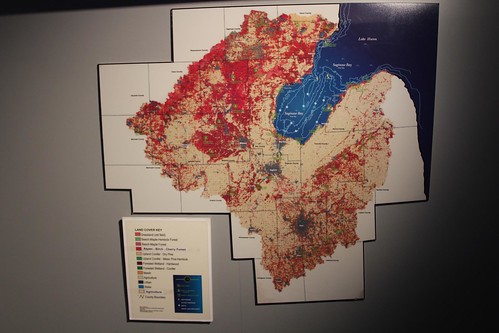 One of the big reasons for such poor water quality is the fact that water does not circulate out of the bay as easily as other places on Lake Huron or Lake Michigan. If you ever decide to visit, I would recommend leaving your speedos at home. 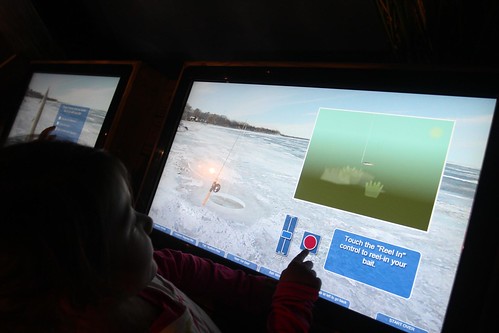 And if you are going to fish, I wouldn’t eat anything that might be caught in the bay. As a matter of fact, you might just want to stick to this interactive fishing video game in the visitor’s center instead. 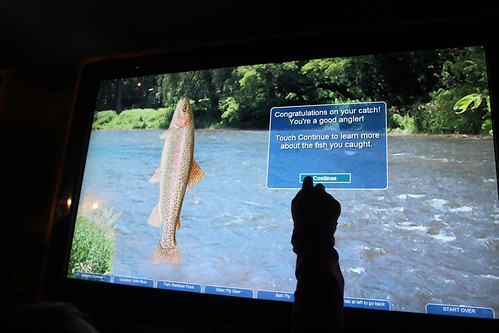 Check it out! Even Ava caught a fish. You don’t need a fishing pole and you definitely don’t get your hands dirty. 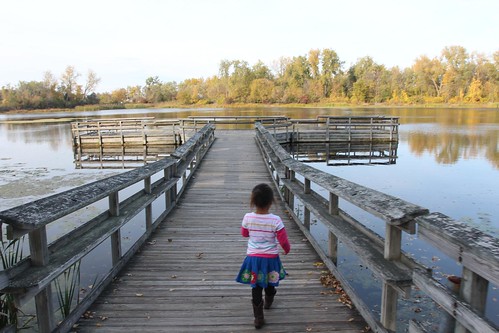 The park itself is a beautiful place to be in the fall. The leaves are pretty close to peaking in colors and everywhere we look is a gorgeous postcard photo. 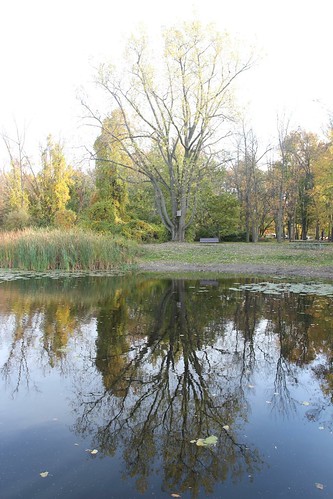 Anyone want to play ‘find the airstream’? This photo is taken from the other side of that little inland lake and you can just barely see Mali Mish in there behind some trees. 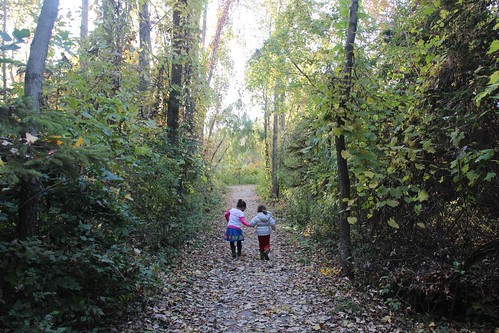 To actually get to see Lake Huron, we took a little hike through a woodsy trail. Mila was a little scared so Ava held her hand as they walked down this beautiful path. 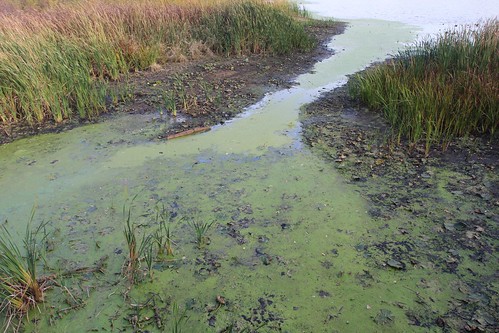 A sign of some serious water quality problems is the green moss floating on the surface. This is where a storm drain dumps water from God-knows-where into that little inland lake. 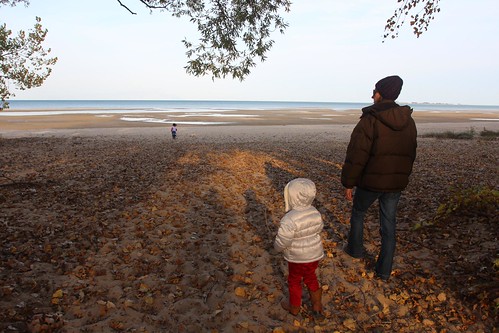 As we got out to see Lake Huron, we were surprised to see how low the water line was. There are no tides here like there are at ocean beaches but the water goes a good 1/4 to 1/2 mile out. 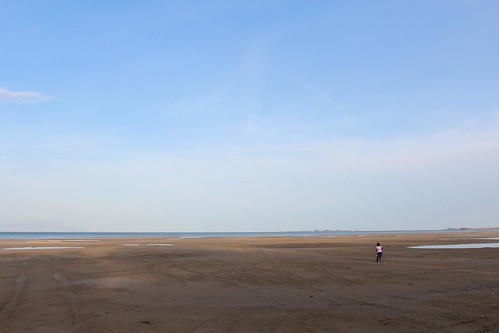 Having been to a lot of windy Michigan beaches, today was a relatively warm day with hardly any wind. 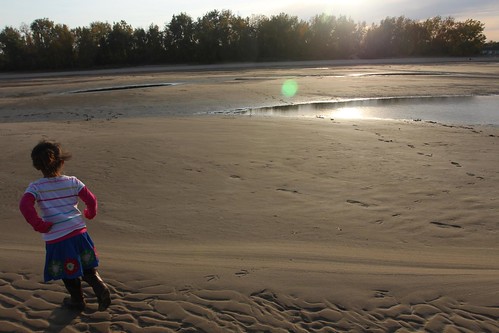 Ava and I venture out to the edge of the water but we did not dare to touch the lake with anything. 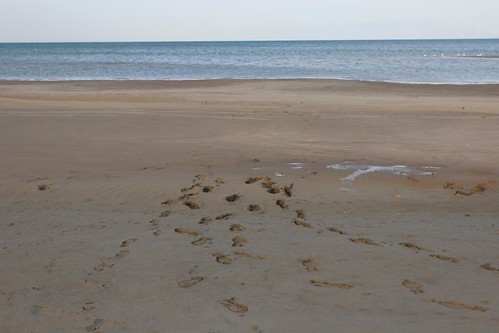 This is all usually on the bottom of the lake when the water levels are higher. That being the case, we got ourselves into a few patches of soft and squishy sand. 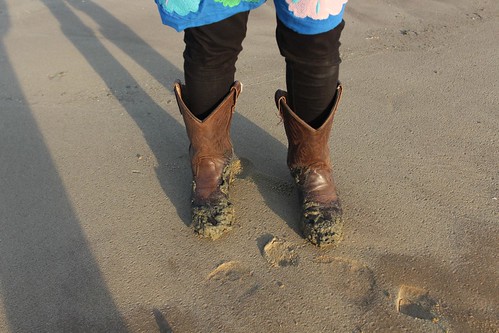 These thrift store boots we got for Ava in Fruita, Colorado for a buck has definitely been worth every penny and then some. 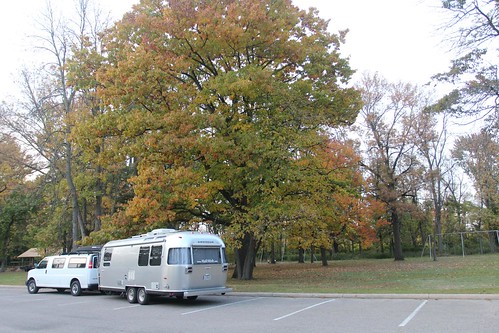 We will head over to another Walmart for a night. Tomorrow we will head down towards Ann Arbor and find a nice campground to check into.

I’m APPALLED at your statement about not even touching the water!!!

I lived in Bay City for a number of years, kept my sailboat at the Yacht Club & competed regularly sailing races-some even started there & went to places some distances away, but I think a “trailer sailor” as yourself has never had the opportunity to learn more than you hear from the media!!!