First of all, I want to set things straight with this series of posts. Unlike our 2010 Cross Country posts, it is not likely I will write a post per day on this trip. Unlike a road trip, we don’t have a car and we stay in only a handful of places. That means a handful of days on this trip were not too different from each other. I will try to stay in chronological order though and highlight some of the days that were more significant. For example, our transit day from Los Angeles to Paris. 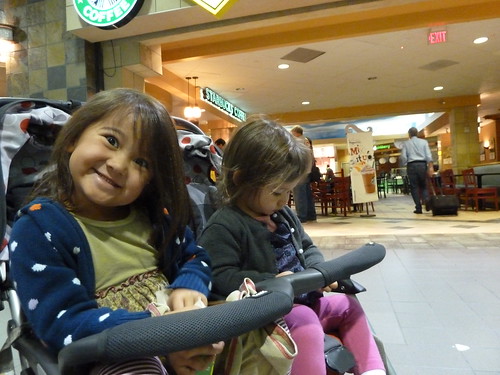 It is really hard to pack for a trip longer than a week when you don’t have a car. Because with an extended trip like this, you have to consider having to do laundry. We don’t have enough clothes to last 2 months nor would we want to. As it is, we are carrying a double stroller, 2 car seats, 2 check-in pieces of luggage and 3 carry-on bags. I had forgotten how much I hated traveling by air. I have been spoiled with the leisurely pace of Airstream traveling by land. 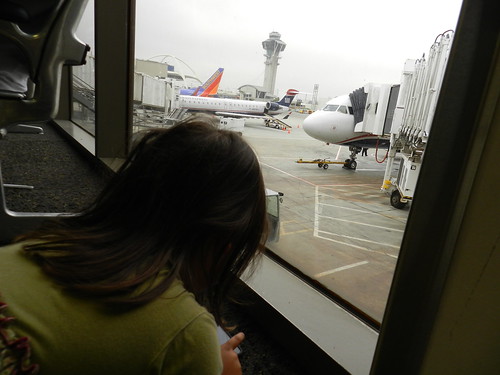 On the other hand, Ava was thrilled with the prospect of flying in an airplane. Here she is looking out the airport window at the US Airways plane that was going to take us to our 4-hour Philadelphia layover. 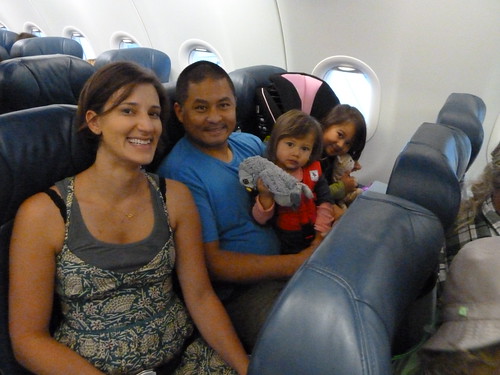 With all of our luggage checked and carseat firmly secured by Ava’s window seat, we finally got to take a breather and sit down to get my complimentary adult beverage… or maybe not…

After waiting in our plane to Philly for about 30 minutes watching the crew hustling back and forth along the aisles, the captain announced that we were all to get out of the plane and would all need to rebook our flights. Yep, the plane apparently was in such disrepair that it had to be grounded overnight. Now it is a race to get on the next available flight in any way we can. Through a special phone number the airline had set up specifically for this last minute ordeal, everyone frantically got back in line at the terminal and jabbered away on their mobile phones to see how they were going to get on another flight.

Since we had a connecting flight to catch in Philly, we didn’t have the option of waiting for more than a couple of hours. The profit margins with air travel have been cut so thin with the airlines, they have all but over booked every single flight that leaves the tarmac. Ultimately, US Airways did not have seats for us to go to Philly to make our connecting flight. But they did arrange for Air Tahiti to fly us direct to our destination a few hours later. That worked for us. The fewer connecting flights we need to take the better. Right? Kind of.

Having to change airlines also means that we have to board from another terminal. It also means that we now have to go get our checked luggage back from US Airways and check them back into Air Tahiti. Did I mentioned we have A LOT of luggage? 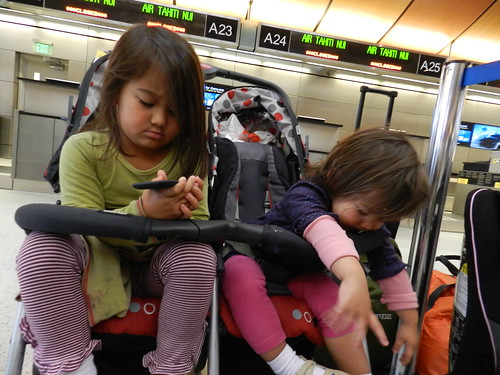 Finally, after a couple of trips up and down the terminals in LAX, we got our luggage rechecked in along with our new boarding passes. All I’ve got to show for is a very sweaty t-shirt that I will have to wear for at least the next 15 hours. 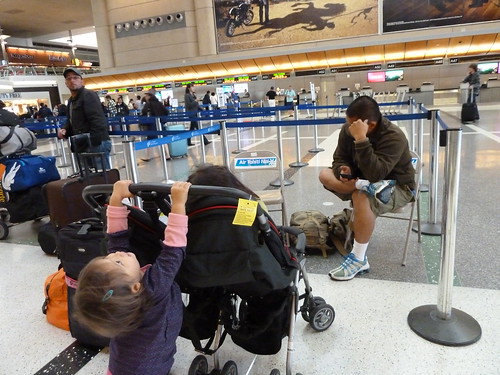 I guess it might all be worthwhile to not have to go through this again in Philly. At least that is how I will be justifying it. 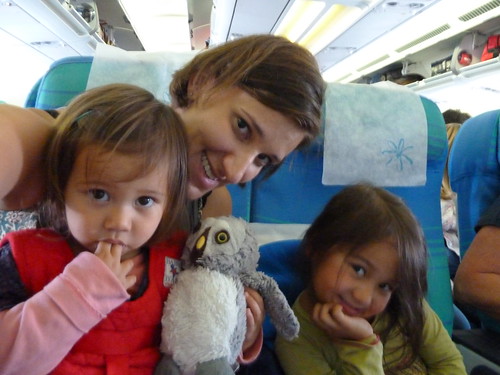 Finally, we board our direct flight to Charles de Gaulle and find our seats. The girls got seats together but Ava did not get her window nor was able to sit in her car seat. 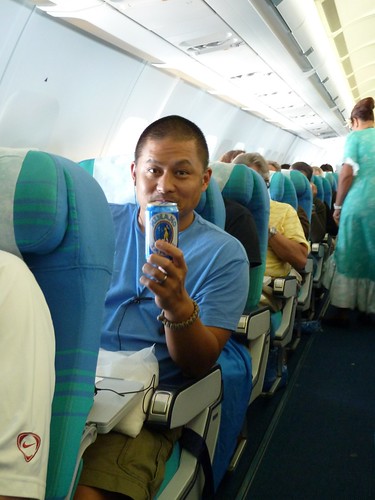 I had to sit the next 11 hours next to a stranger but at least I finally got my Hinano to make my day a little easier. 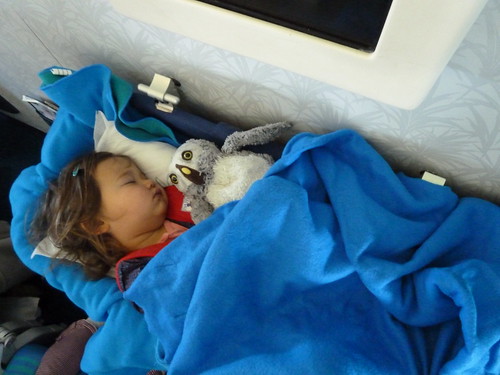 Our monster 30-lb 1 year old was somehow allowed to sleep in the bulkhead mounted bassinet. 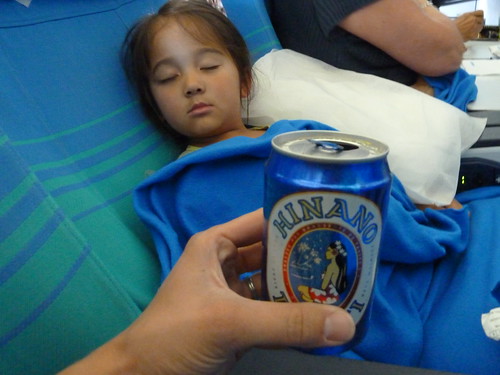 Ava was out in no time flat. That means Marlene got to get in on a little Hinano action herself 🙂 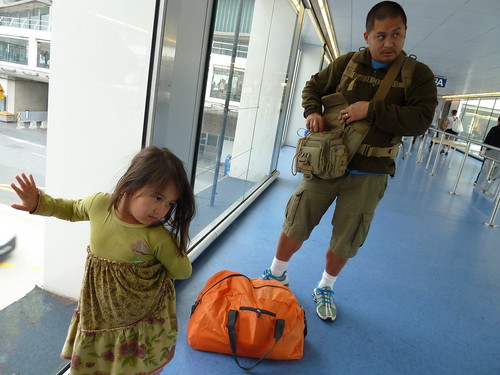 I know you don’t want to hear about the exciting adventures of a family in an international flight so I will spare you the boring details. Bottom line is that I hardly got a wink. A lot of hours of staring at the back of someone else’s head rest later, we finally arrived in Charles de Gaulle in Paris.

One of the other nice things with Marlene’s family besides from having a few places to stay for free in Croatia is that her family is pretty spread out across the world. For our honeymoon, we got to stay in Tahiti for free with her mom’s cousin. There are more family in Australia as well as Panama that we will one day take advantage of but today, we are getting picked up by Marlene’s mom’s other cousin. Who happens to live just outside of Paris in a quaint little country town called Montfort l’Amaury. 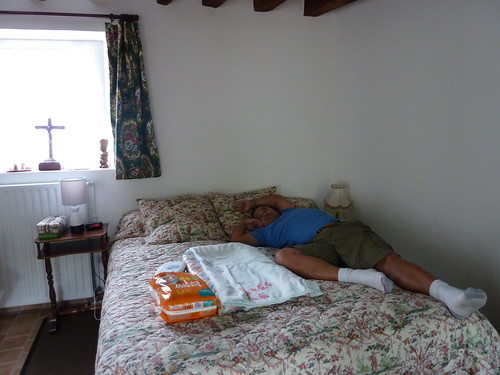 She picked us up at the airport and drove us an hour west of Paris to her beautiful home in the French countryside. I couldn’t be happier to see this bed and crashed without even getting under the covers. 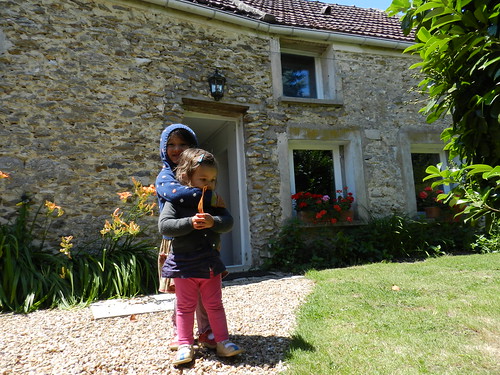 Here are the girls outside of the little stone guest house on their property. I don’t know how old this house is but it has to be at least a couple of hundred years old. 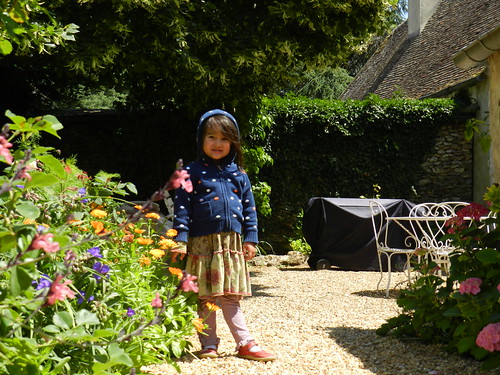 Ava was thrilled to be in France. 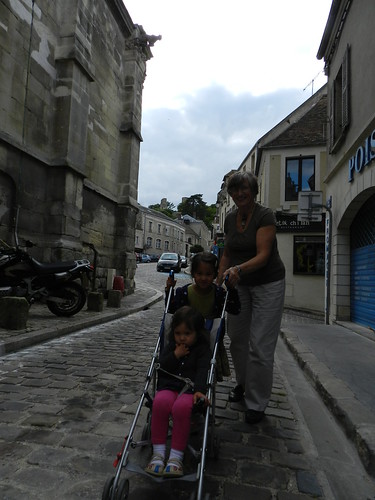 While I slept, the girls hung out with Teta (Croatian for Aunt) Milica for a little tour of downtown Montfort l’Amaury. 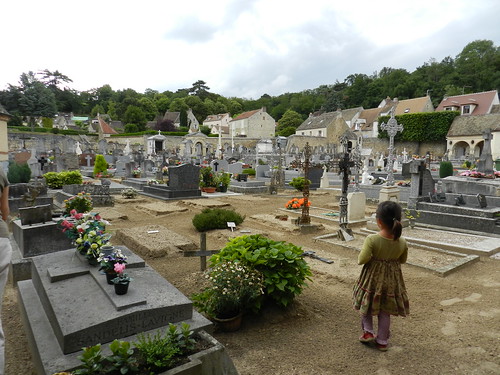 And of course a trip to the town’s cemetery. 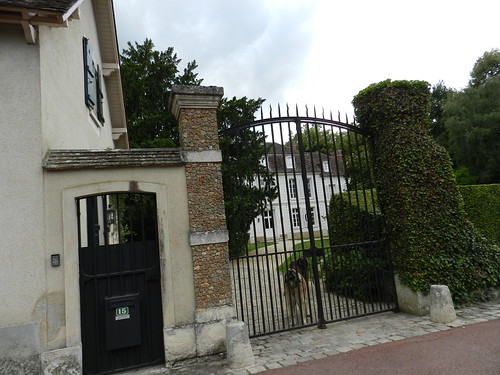 Montfort l’Amaury in the recent years have become a posh vacation destination for some of the rich in France. Teta Milica had been in this area for many years and suddenly all of these former farm houses were snatched up by fashionistas like Christian Dior to convert into gated mansions. I couldn’t care less about who was sleeping next door to me. I just needed to get some sleep.

So fun! We are trying to plan an international trip before Emerson turns 2. I’m terrified of flying with a child. Looks like your girls did fabulous! Love the pics!