Since we got lucky with a last minute reservations at Fort Wilderness in Disney World, our time in Savannah is unfortunately cut short to just 4 days. That might sound like a decent amount of time to be in a city, and it usually is, but we love Savannah so much that we originally planned on being here for at least a week. Well, what are you gonna do? You win some and you lose some. I doubt anyone will be sympathetic for us for having to leave Savannah because we have to go to Disney World. 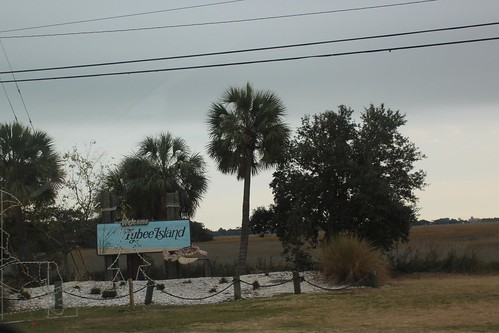 Anyone visiting Savannah has to try to hit Tybee Island for at least an afternoon. We were there for a day during our last visit in 2010. We are now caravaning with Kyle who has been to 49 states, every one except for Hawaii, and 10 Canadian provinces and some of them multiple times. It is refreshing to talk to someone who has spent more time on the road than us. When he said that he never made it to Tybee Island, we felt obligated to show him around a new place for a change. 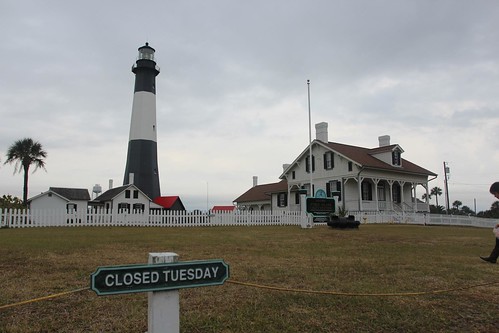 Our first stop was to a restaurant by the lighthouse called North Beach Grill. Like the light house, it was closed on Tuesdays. 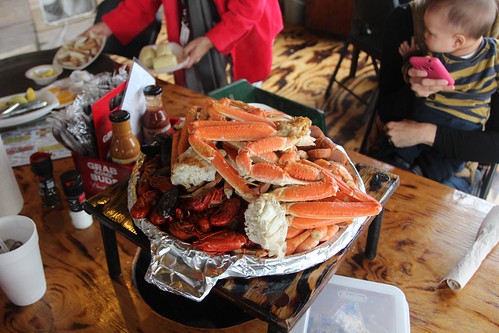 We decided to make our way back to the Crab Shack where we chowed down on their seafood platter last time. We had to settle on our second choice for lunch but I have a feeling that no one feels bad for us for having to settle for fresh seafood either. 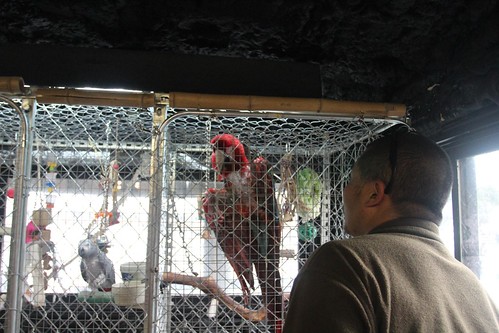 The food was just what we remembered. It’s messy but delicious. We did the usual tour of the restaurant after we ate. There are lots of things to see here like this 50 year old parrot. 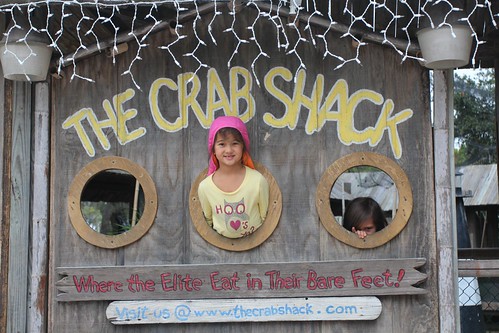 And one of the girls was happy about taking a touristy picture. 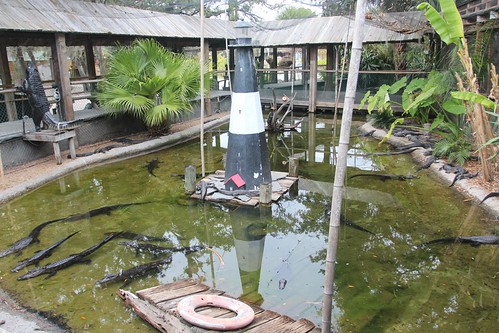 They keep a fresh stock of baby alligators here for tourists to feed, although it is too cold right now for them to eat. Most of them didn’t move at all the entire time. 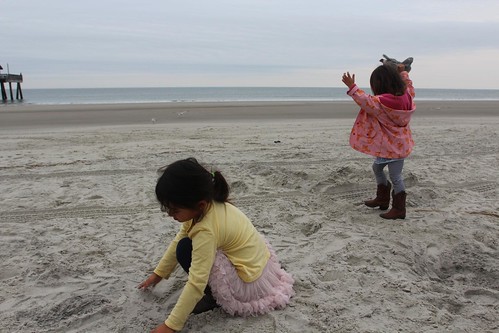 After the Crab Shack, we finally made our way back to the Atlantic Ocean. This is the last place we played at the beach during our 2010 trip and it is also the first place we got to dip our toes in the water in the Atlantic on this trip. It is a little cold still but we obliged for the sake of the trip. 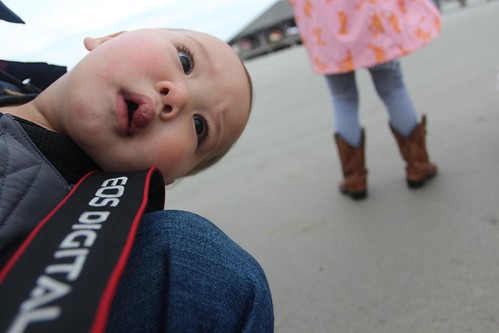 Baby Luka is enjoying his first time on a beach along the Atlantic. This is him trying to get a good look across the pond. 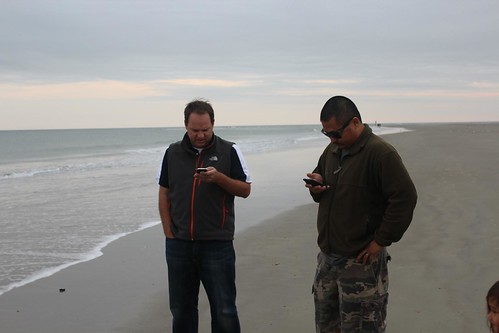 What do you think the two nerds were doing at the beach? Yeah, looking on our phones. 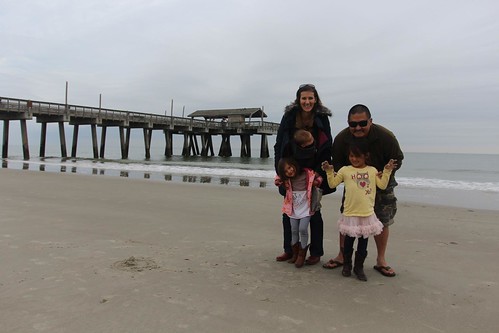 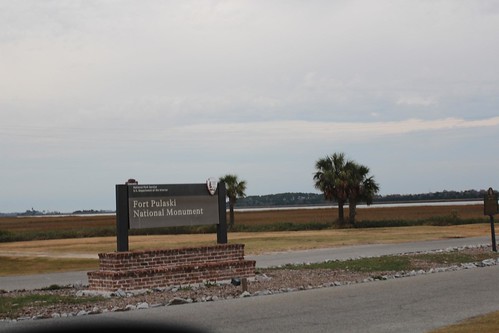 On our way back to Skidaway Island, we decided to stop at Fort Pulaski National Monument. It is a free visit since we already have the National Park Pass that we bought back at Bryce Canyon. 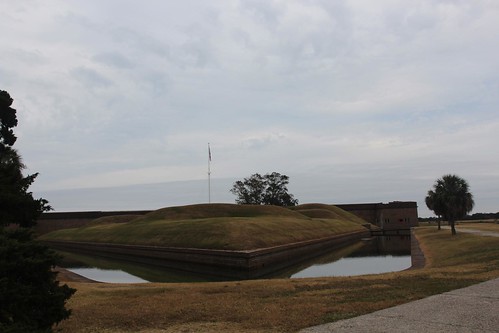 Fort Pulaski was a confederate stronghold during the civil war. It is part of the multi-layered fortification that protected Savannah from the Union forces. 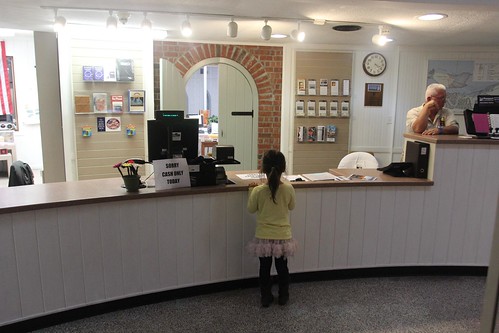 We are here a bit late in the day but we asked the staff for Junior Ranger workbooks anyways. The older couple that was working here was really not in the mood for little kids trying to learn about the place. They first told us that we would have to come back tomorrow. When we insisted that we could at least try, they didn’t want to give Mila a chance to earn her badge. We have been to lots of National Parks and no one has ever turned her away from trying. We decided that it wasn’t worth the effort to deal with them so we just went on with the visit without it. 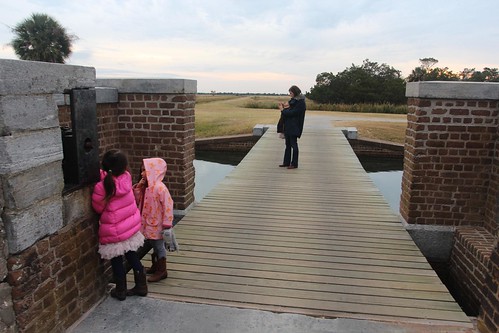 The girls liked that the Fort looked like a castle complete with a moat and draw bridge. They were a little over zealous about their strength when they tried to crank up the bridge by hand. 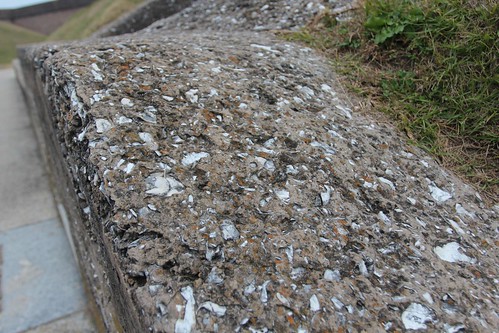 Around here, a lot of the old structures are built with coquina. Coquina is Spanish for “small shells”. It is found in southern Georgia and Florida and used as building material. 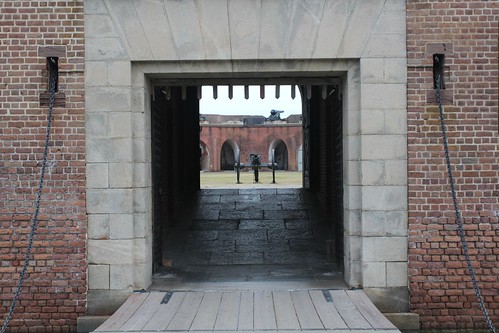 Fort Pulaski was named after a military commander from Poland named Kazimierz Pulaski, who fought under George Washington during the Revolutionary War. 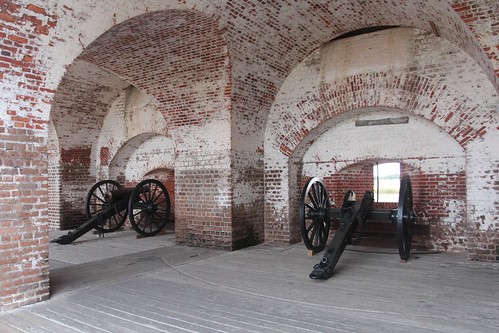 The walls of the fort are 11 feet thick and the only thing that could have penetrated them at the time were the heaviest of smooth bore cannons that must be fired from land. That kind of firepower only had a range of less than a half mile during the time of the Civil War and the closest land that would allow firing is well outside of range. 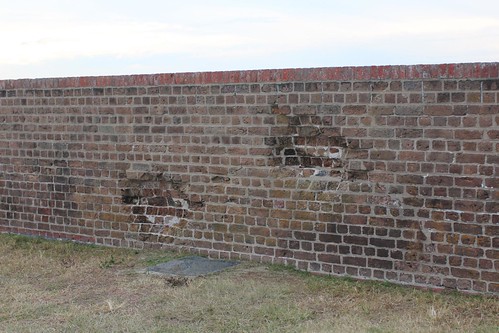 History was not kind to the future General’s optimism. Union forces used their newer and longer-ranged rifled artillery and bombarded the fort for over 30 hours from a distance of over 4 miles before the corner of the fort was breached. Today, you can still see some of the damage sustained during the siege. 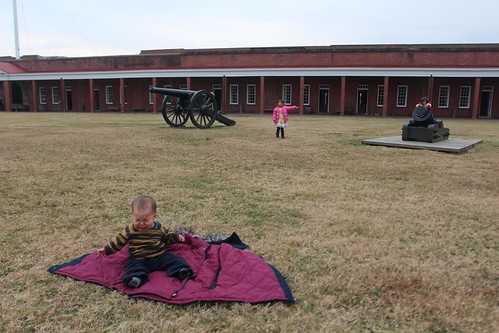 The success of the rifled cannon during the siege of Fort Pulaski forever rendered brick forts such as this one obsolete. Luka here is doing what probably Robert E. Lee did when he first heard about the fall of Fort Pulaski. 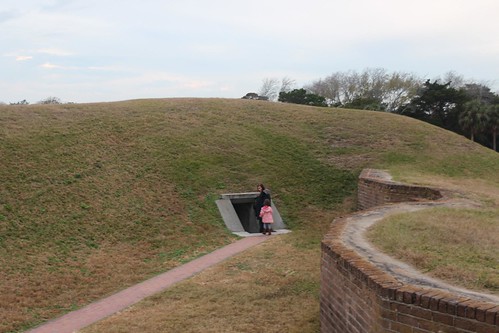 Outside the main gates of the garrison but contained within the moat are these subterranean rooms and passages. 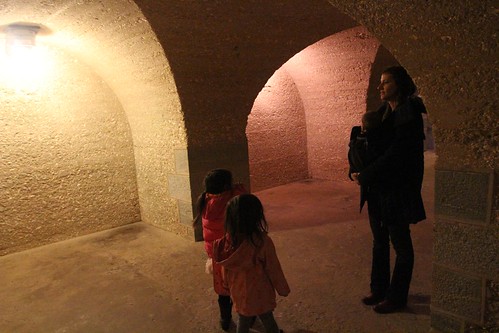 Many of these were used as ways to navigate through the fort as well as supply storage. Even though it really isn’t all that extensive of a tunnel system, there is only one way out if you are trying to get across the draw bridge. 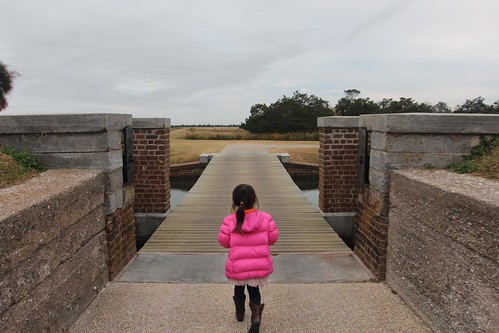 In case you were wondering, we did manage to find our way out eventually.