This morning we woke up to overcast skies and light but persistent rain. Last night we came to Lexington and met up with Doug and his family of Troutstream who hosted us at their home a couple of weeks ago in Ohio. When we left, we had made tentative plans to meet up again in Kentucky to do some Kentucky trail hiking: The Bourbon Trail. 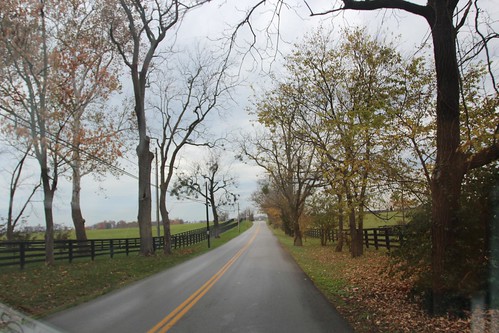 From the Kentucky Horse Park campground we headed south towards the town of Versailles. That is pronounced ‘verr-sails’ in Kentuckian. They don’t do Francais here. Since I got here to Louisville, I have been programming my GPS to take the shortest distance routes rather than the fastest routes. The main reason was that the freeways can be a little congested. Driving to the storage yard where we kept the Mish while we stayed at Carrie’s house, it was more convenient to take local roads. A nice side effect of that turns out to be seeing some of the nicest countryside Kentucky has to offer. 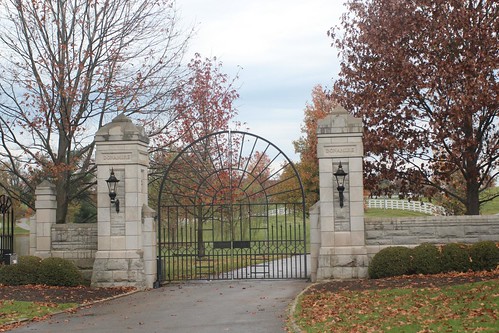 Most people who are not familiar with Kentucky probably never expected to see so much opulence here. There is a lot of money in this area. Not in all of Kentucky, but specifically this area near Lexington where horses are a way of life. This is the equestrian epicenter of the world. 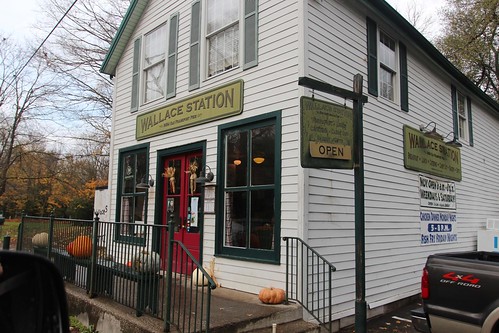 Right in the middle of this is a little building among the rolling blue grass fields called Wallace Station. This is popular eats around this neck of the woods. Even on a dreary Saturday like this, it was packed. 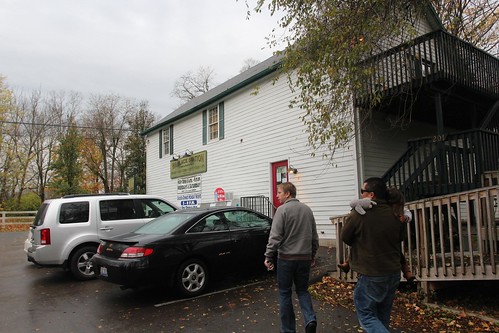 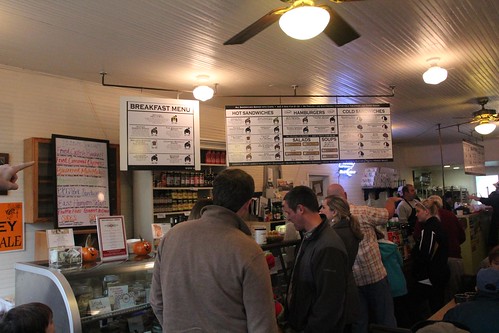 Wallace Station is known for their burgers, sandwiches and deep friend delicacies. One of the best things on the menu is the twist on a Kentucky favorite, the Hot Brown burger. 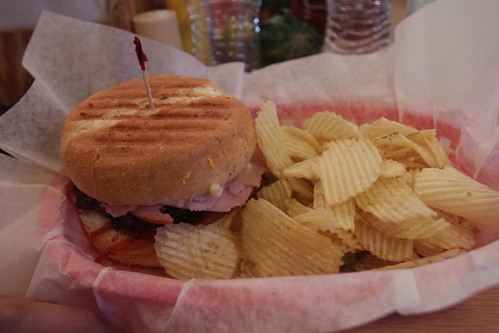 Like a traditional Hot Brown, this meal is made with bread, mornay sauce, turkey, cheese and bacon. The difference is that it is assembled with a burger patty and served with chips. It makes total sense since the Hot Brown is traditionally an open-faced sandwich. It was a matter of time before someone made a delectable close-faced version. 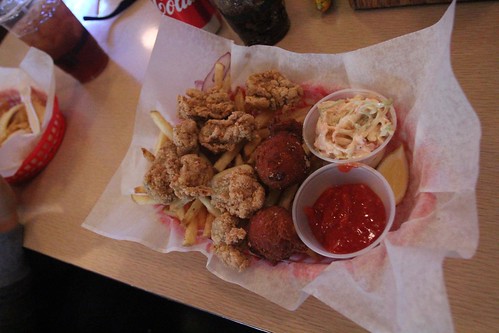 Doug got their cornmeal fried oysters server with hush puppies and fries. Kentucky is not known for their oysters but they got this deep frying thing pretty much dialed in. 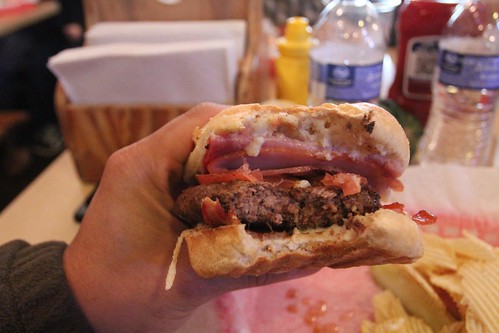 I know by now you are expecting me to show you the inside of a half-eaten burger. There you have it. This is the Hot Brown burger from Wallace Station. It is worth every penny at only 8 bucks. Even if you have to wait in line to buy one. 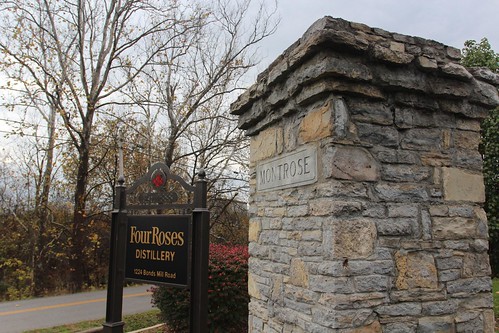 Our first stop on the trail is Four Roses Distillery. This is one of the smaller distilleries on the trail and also very distinct in its architectural design. 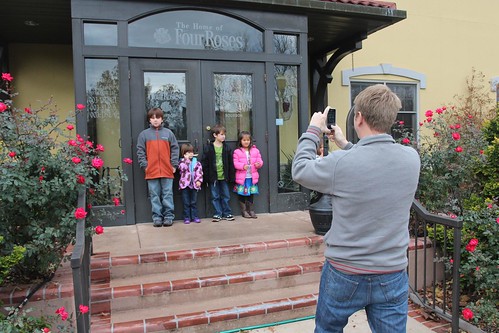 The founder of Four Roses was a fan of the Spanish-mission style architecture and decided to build his distillery back in 1910 after a visit to California. The company has gone through some ownership turmoil over the years. In 1943, Four Roses was sold to Seagrams of Canada and its whiskey was taken out of circulation in the States and sold only in Europe and Asia. When Seagrams became defunct in 2000 after several failed ventures, it passed through several owners before ending in the hands of the Japanese brewery company, Kirin. 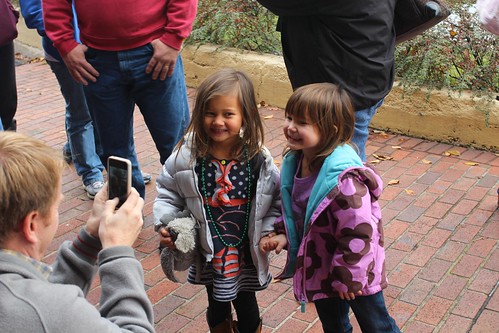 During Seagrams ownership, Four Roses had gone away from straight bourbon and became a maker of blended whiskeys. Kirin decided to bring the Four Roses back to its Kentucky roots and went back to distilling only straight Kentucky bourbon. Using 5 mash recipes and 2 different types of yeasts, Four Roses produce 10 different types of straight bourbon. Their final products are based on formulas that use anywhere from 1 or all 10 of these base bourbons. Another one of their distinguishing methods of making bourbon is using only single story barrel houses. That means the barrels do not need to be rotated to account for the variation of temperature from top to bottom of the building in the aging process. 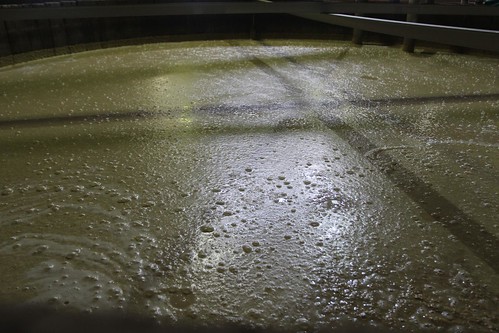 We have taken several distillery tours during our trips and most of them ban photography inside the distillery. Not at Four Roses, we were free to take as many photos as we wanted. The smell of the mash cooking in the pots as you walk into the room is very intense. 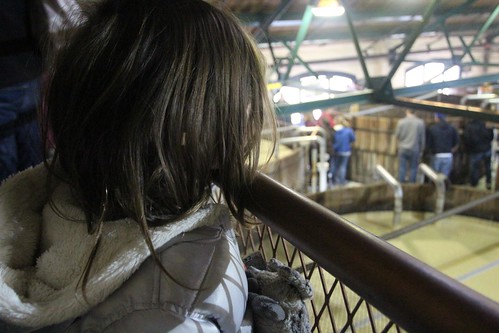 As the yeast chews away at the mostly corn-based mash, you can see the bubbles seeping up on top of the surface and filling the room with the smell of sourdough bread. The kids were not big fans of the smell. Maybe this is why the other adults on the tour didn’t bring theirs… 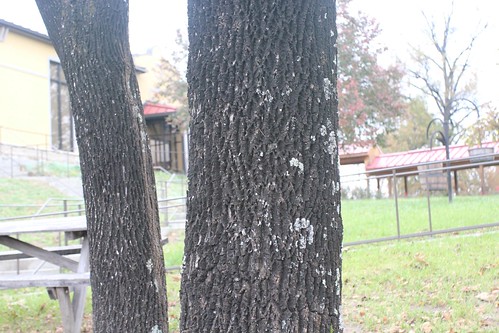 From our visit to Jack Daniels in 2010, I learned that a telltale sign of a still in the area is the black fungus growing on the trunks of the trees. During the days of prohibition, agents used this as a method to locate moonshiners. 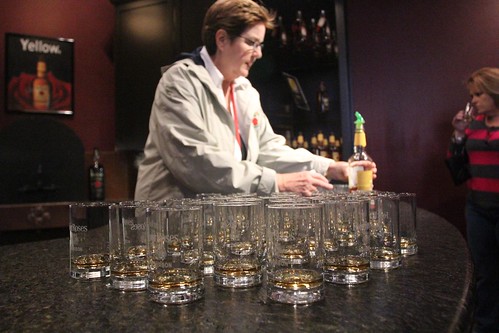 This right here is what the tours are all about. We got to taste 3 different bourbons offered at Four Roses: Yellow Label, Small Batch and Single Barrel. Marlene may or may not have given me her share of her samples. Don’t worry, I am a big boy, I can handle it. 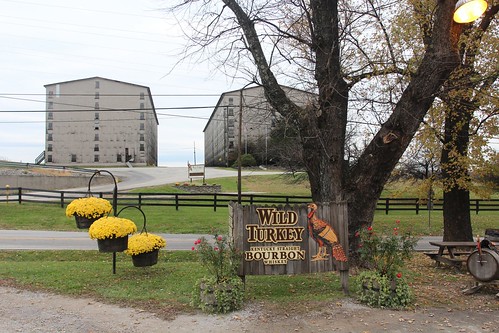 From the Spanish-mission style Four Roses, we headed over to Wild Turkey. Wild Turkey opted for a more utilitarian, Russian Bolshevik or WWII concentration camp style architecture. I am guessing there wasn’t a similarly inspiring trip that prompted their architectural decision. 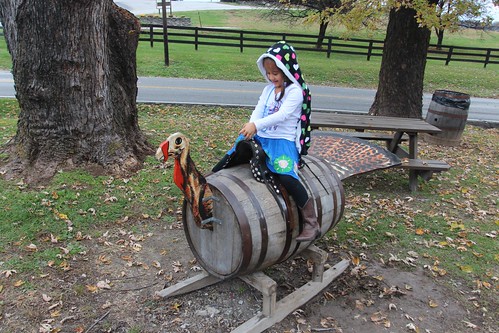 As one of the biggest bourbon distilleries, Wild Turkey started off humbly in 1869 by the Ripley brothers. After selling in 1952 to the Gould brothers, Wild Turkey has also changed hands a few times. As of 2009, it is owned by the Italian beverage company Campari. Actually the name Wild Turkey did not come about until 1940 when the master distiller took some of his newest batch with him on a turkey hunting trip. His friends were so impressed by it, they kept asking him for that ‘Wild Turkey’ whiskey after they returned and the name was born. 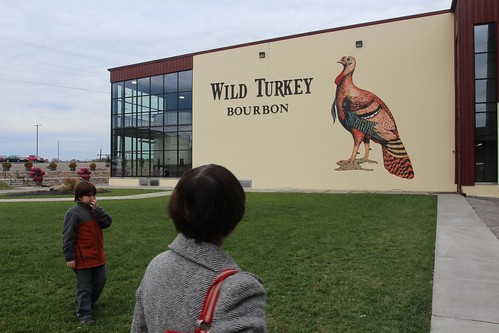 The distillery we toured is a brand new facility and the biggest single-building still in the country. 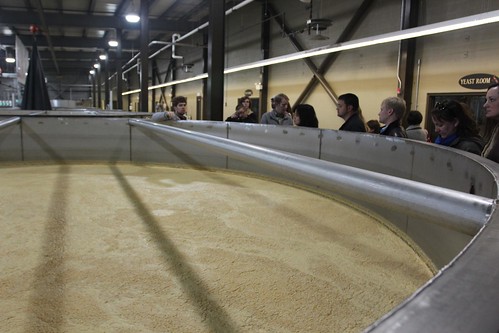 In their fermentation room, there are tanks full of corn mash like this as far as the eye can see. As the yeast digests the sugars in the grain, turning them into alcohol, carbon dioxide is produced. If you lower you head into the top of the tank just below the lip, it can take you to your knees with the lack of oxygen.

The kids once again fled in horror from the smell of the fermenting mash. At the end of this fermenting process, a wash is created with an alcoholic content around 15-20%. The distilling process will bring the alcohol content up to as much as 80%.

In order to be called bourbon, the mash bill has to consist of at least 51% corn. Other typical ingredients are wheat, rye and malted barley. It also must be aged in newly made and charred oak barrels. It must enter the barrels at or more than 125 proof and bottled at no less than 80 proof.

This kind of apprenticeship and tradition is apparent when you taste one of their flagship products. I had not intended to buy any bottles from Wild Turkey since it was a mass market brand as I figured that it can be found anywhere. But once I tasted their Russell’s Reserve 10-Year-Old Bourbon, I had to buy one. It was amazingly smooth and mellow and is a true gentleman’s drink. A gentleman that likes to sit back and down a half dozen shots of bourbon, that is. 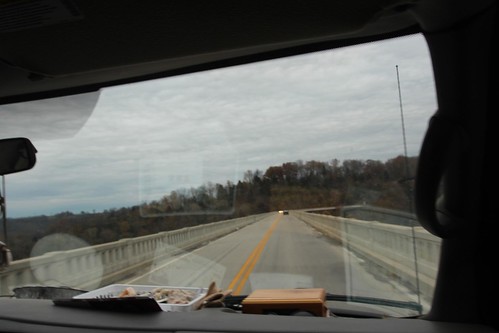 We only had time to visit two distilleries today but they happen to be the same two brands mentioned in the 1973 book (and movie) Fear and Loathing in Las Vegas. I think Hunter S. Thompson would have approved our choices for today’s visit. 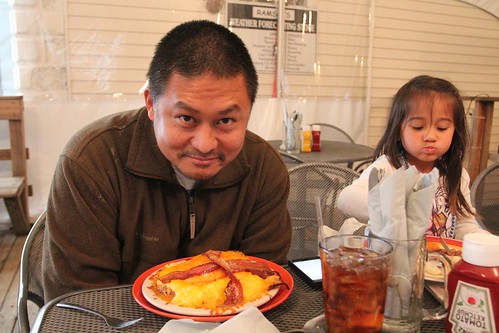 Before we headed back to the horse park, we stopped for dinner in Lexington at a restaurant called Ramsey’s. I had been recommended to try their Hot Brown by one of our Instagram friends and it was a challenge I gladly accepted. It was great although I think I still might be partial to my first two experiences.

We spent the rest of the night hanging out by the camp fire. Doug, his son Jack and I stayed up late chatting and savoring every last moment camping together. Us and our kids became friends quickly when we met in Ludington State Park in Michigan nearly a month ago. Tomorrow, we will spend most of the day with them at the Horse Park to bring yet another one of our mini Airstream rallies to an end.