Tomorrow we would have been in Louisville for a week and also that many nights away from the Mish. Since Yoda had to stay back in there, I have been going there every 2 or 3 days to check on her. The nights here are getting pretty chilly and since I don’t have electrical hookups at the storage place, she is having to snuggle up in the bedding to keep warm at night. That is pretty much the only thing I worry about since we have been here as Carrie has been a gracious host. The only bigger problem I foresee is to talk the girls into leaving here and go back to sleeping on the road again. 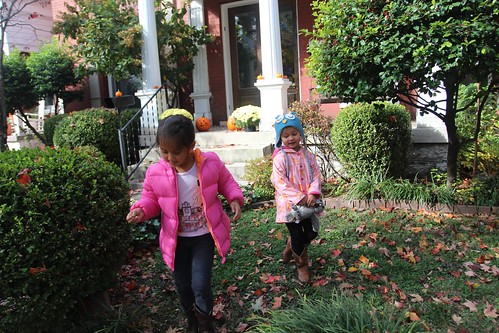 As we are getting to understand Carrie’s new life here in Louisville, we can start to appreciate just how great she has it. The food, the culture and all the world-famous southern hospitality you want at a fraction of the cost of living in California. So what if we have beaches and fair winters? 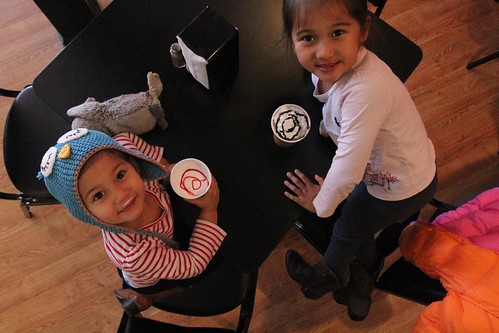 The girls went to her corner coffee shop for hot chocolate this morning while I did a bit of work back at the house. Today, we are going to the famous Brown Hotel. 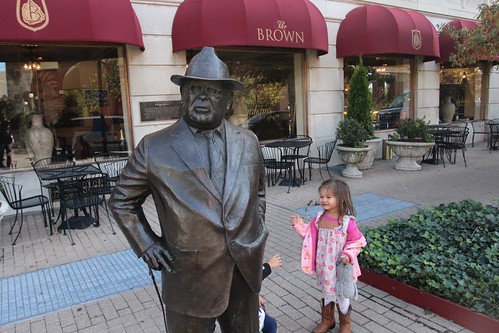 As some of you might know, the Brown Hotel is the home of the original Hot Brown. It is a colonial revival style hotel built in 1923. Construction only took 10 months which is incredibly fast, especially for the 1920s. Named after the builder and owner of the hotel, James Graham Brown, it cost $4 million to build. James G. Brown, not to be confused with the godfather of soul, was a real estate tycoon in the Louisville area. Besides the Brown Hotel, he also developed and owned the Brown Theater, the Brown Garage and probably a handful of other Browns.

Three years after the hotel opened in 1926, a chef at the hotel by the name of Fred K. Schmidt created an open-faced sandwich to satisfy customers who wanted something different from the usual breakfast fare after a night of drinking and dancing. The sandwich consisted of Texas toast, roasted turkey, tomatoes, mornay sauce, cheese and bacon. It was an instant hit and the world famous Hot Brown was born. 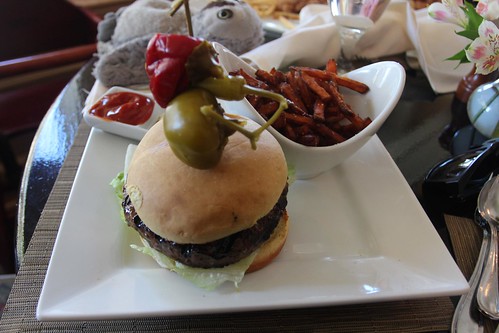 Our visit at the Brown Hotel was mainly to sample the original Hot Brown. Since Marlene is still dairy free, she had to settled for yet another butter-less burger and sweet potato fries. She might be the only person who is losing weight while eating burgers and BLTs everywhere she goes. 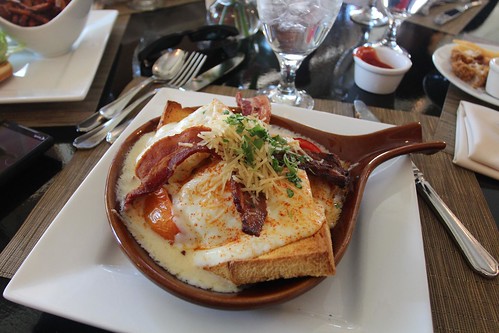 The Hot Brown here is phenomenal. As compared to my first at Lynn’s Paradise Cafe, this is a more traditional version of the famous dish. Every part of the ingredient here is distinguishable with each bite. With 2 critically acclaimed Hot Browns under my belt, I have now become the resident connoisseur among our friends and family. I am not sure if this is something to be proud of, after all, James Graham Brown died of congestive heart failure in 1969 after consuming many Hot Browns in those 43 years. 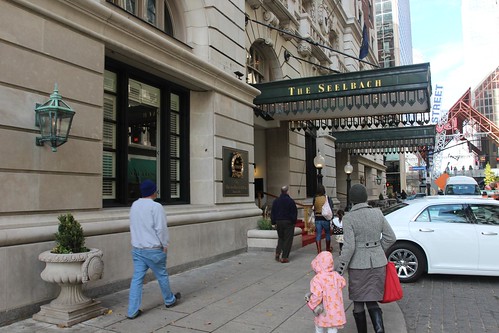 Our visit to the downtown area didn’t end at the Brown Hotel. While we were out visiting fancy hotels, we decided to pop into the Seelbach right down the street. The Seelbach opened in 1905 after about 18 months of construction. It was designed to bring European opulence to the States. Since then the hotel has changed hands numerous times including a 7 year closure due to economic troubles between 1975 and 1982. It is now operating under the name of Seelbach Hilton. 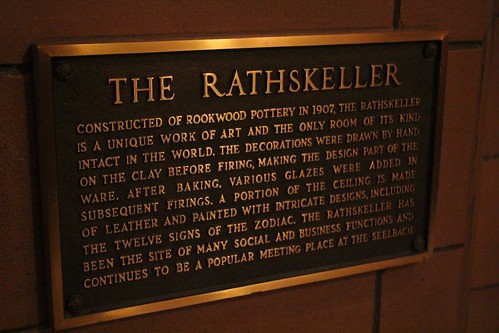 The Seelbach was a popular place to a large number of famous guests over the years. That list includes 8 presidents and countless celebrities. A handful of infamous characters such as east coast gangsters Lucky Luciano and Al Capone are also to have known to have been playing in a few secret poker games. Some of those games probably went down right here in the Rathskeller. 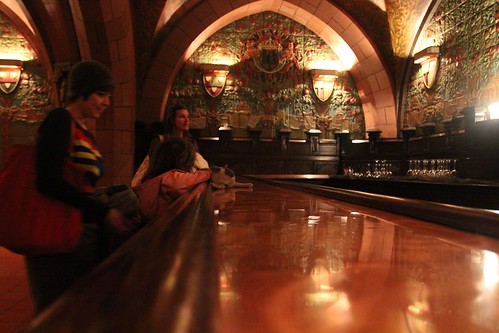 A Rathskeller is typically referred to as a bar or restaurant in the basement of an establishment. Louis and Otto Seelbach, the brothers who built the hotel, were of Bavarian descent and they saw fit that a European styled hotel would need an accompanying Rathskeller. 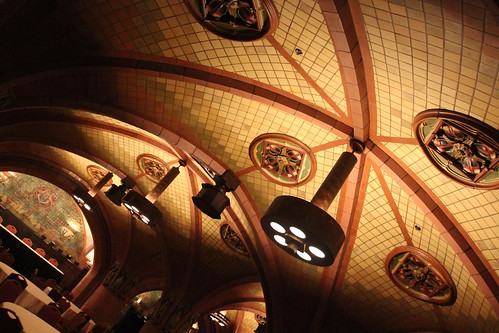 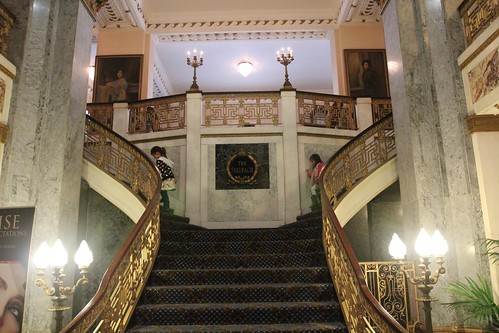 Surely there are a few spirits roaming the halls of this building. The girls made their usual rounds much to the staff’s dismay. 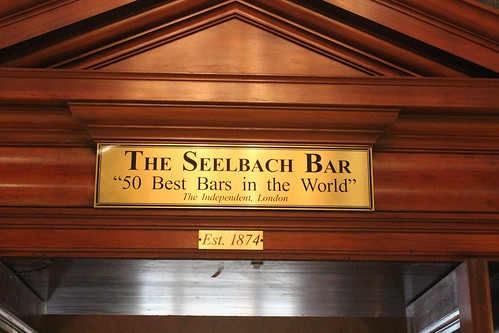 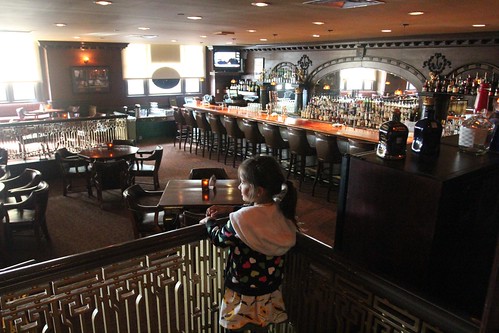 As one of the world’s best bars, it features dozens of world class Kentucky Bourbons. Ava is imagining what it would be like to have her 21st birthday party here. 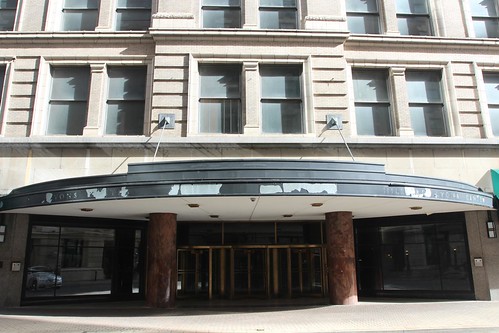 Ironically the building right across the street from the Seelbach was empty and deserted. As much as the recovery has been progressing, there are still very clear signs of pain in a lot of the places we see. We are doing our best in helping along with the recovery, at least when it comes to hot browns. 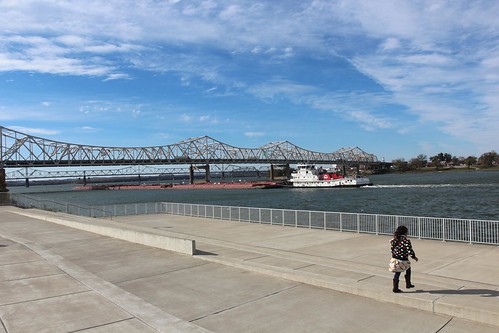 For the rest of the afternoon, we drove around to see some more sights around Louisville. Here is the riverfront of Louisville with Indiana right across. 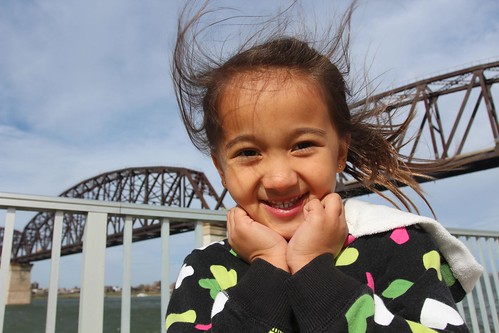 The Ohio river is the largest tributary by volume to the Mississippi. It was at one point considered the western extension of the Mason-Dixon line that split Pennsylvania from Maryland. During the Civil War, Kentucky was a major Union stronghold although the state itself allowed slavery. 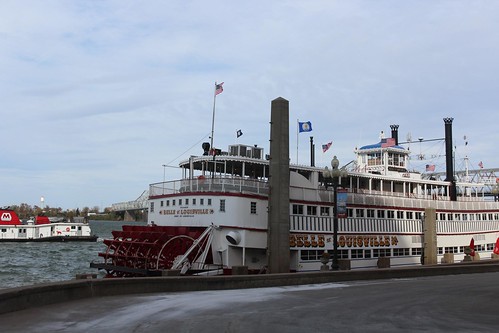 The Belle of Louisville is a steamboat on the Ohio river and it is owned and operated by the city of Louisville. Launched in 1915, it was originally named Idlewild and has a long history of hauling passengers and cargo up and down the river. Now it docks at the downtown riverfront and operates seasonal tours for visitors. 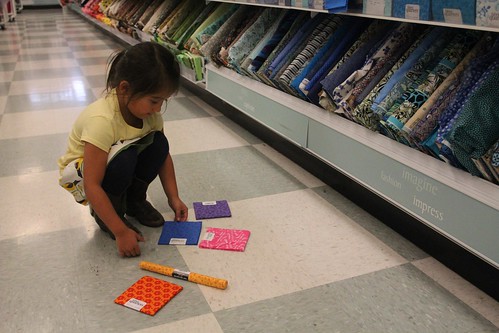 Before we headed back to Carrie’s house, we visited Yoda at the storage yard and made a stop at the fabric store to gather a few more items for Ava’s Halloween costume. 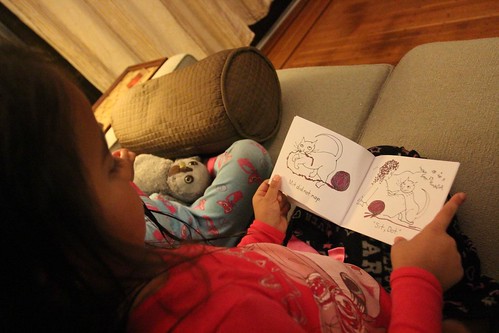 “OK, Mila, let me read you a story about a cat.” And she did just that. She read that whole book. Teacher Mama was very proud.

Ava was such a good sport in the wind that day!!