Often when we are visiting friends new and old during our travels, we are presented with a action-packed, non-stop itinerary. We appreciate the gesture completely but sometimes we just want to relax and take it easy. Doug and Melizza have been reading our blog for awhile and they understand that as fellow travelers and Airstreamers. Today, we are just going to do spend the day hanging out together and we couldn’t have hoped for more beautiful weather. 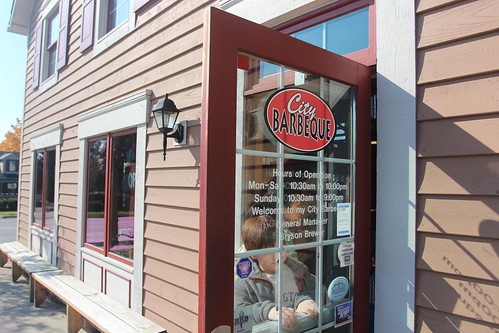 Unlike the last several days, today was warm and sunny. We are getting a bit of an indian summer here in the middle of fall. In the next couple of days, we are suppose to have weather reaching as high as mid 80s around here. 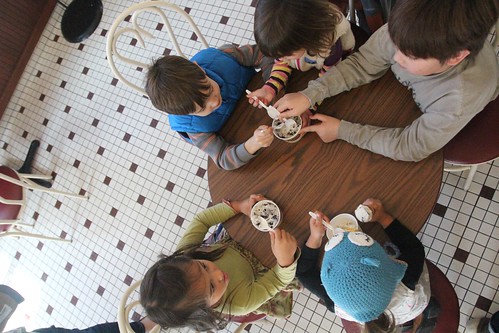 For lunch we headed over to a local BBQ chain called City BBQ. It is right next to another locally owned eatery called Graeter’s which serve deliciously homemade ice cream. 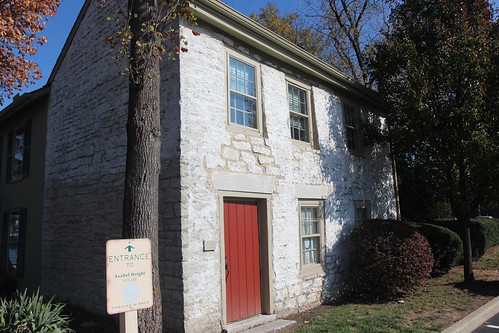 Centerville is a town founded in the late 1700s. Through the years, much of the original buildings in the town have been demolished and replaced with modern structures. Only 13 of these stone buildings are left. This one dates back to 1806 and was the home to Orville and Wilbur Wright’s great uncle Asahel Wright. In a letter written by Wilbur Wright in 1892, he documents a visit to Centerville to this house while riding bicycles with his brother. 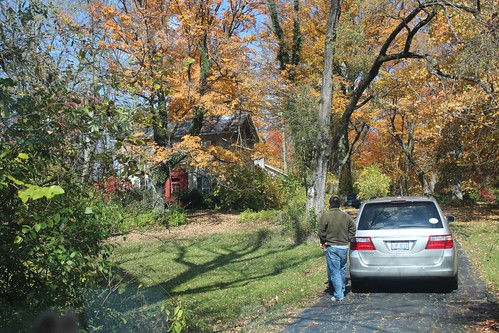 Another house we drove by on the way back to the Trout compound is this amazingly picturesque 4-acre property surrounded by suburban homes. It is only a half mile from the Trouts yet a 200-year-old stone house sits here awaiting for a restoration. It was on the market for sale just a few weeks ago for around $200,000. 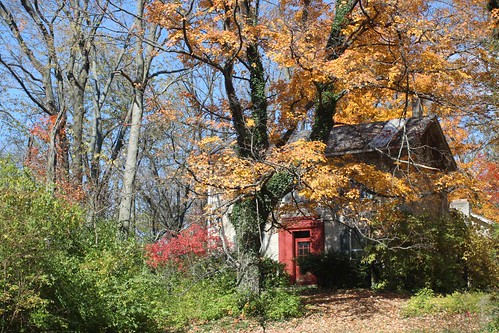 The beautifully hand-made red door and stone walls are something you don’t see anymore in a modern homes. The home’s original owner was a soldier in George Washington’s army during the Revolutionary War. For $200,000 someone could, and someone probably did, buy this gem in the middle of Centerville, Ohio. 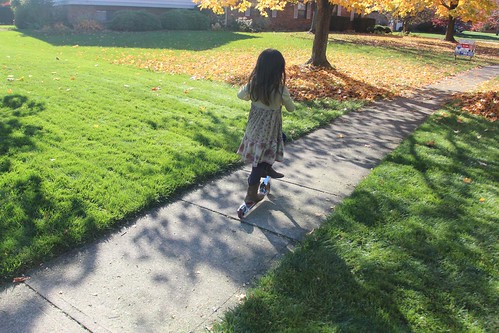 The rest of the afternoon was spent hanging out and playing in Doug and Melizza’s neighborhood. I worked from inside the Airstream while the kids played in the yard. Can you tell which side of this yard is Doug’s? Here is a hint, its the side that is meticulously kept and it isn’t for sale. 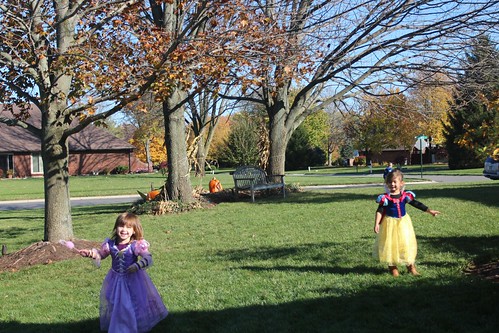 The girls had a blast playing with Lucy and the boys. They are going to be very bummed when we leave tomorrow. 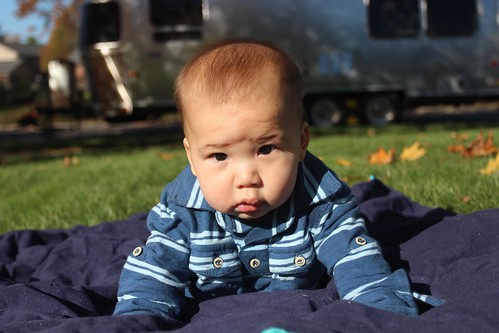 Luka is reaching new milestones every day. Besides the new teeth and eating solid foods, he is very close to crawling. That means we are going to have 3 mobile kids pretty soon. 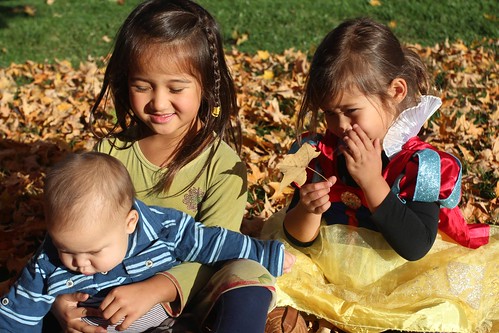 We tried to take advantage of the setting sun to stage a photo shoot in the fallen leaves. That didn’t work out so well. The girls are apparently of vampire descent and are afraid of the sun. Looks like somebody forgot their Ray-Ban sunglasses! 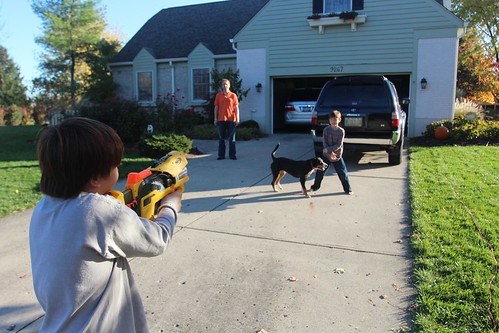 Guess what the boys are doing? Yeah, shooting each other with nerf guns. Very wise of Ethan to cover his sensitive areas. 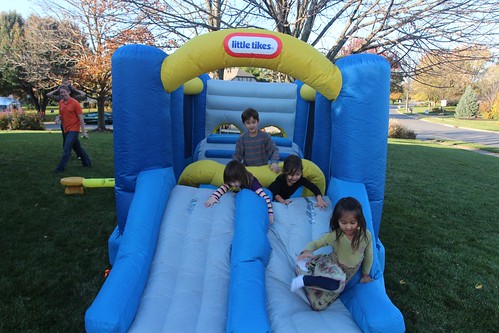 Doug even busted out a bounce house for the kids to play in. It is going to be very hard to pry these girls away from here tomorrow morning. 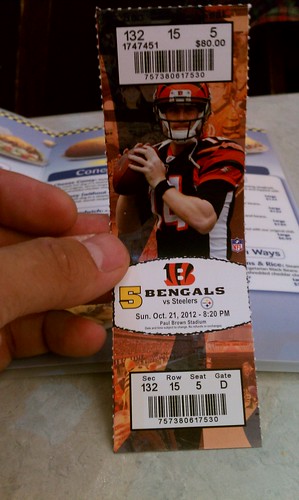 As if Doug and Melizza weren’t amazing enough hosts already, I was invited to join him, his brother and father to the Bengals and Steeler’s game in Cincinnati where they are season ticket holders. I have never been to a NFL game and to go to my first game with seats at the 15th row is incredible. 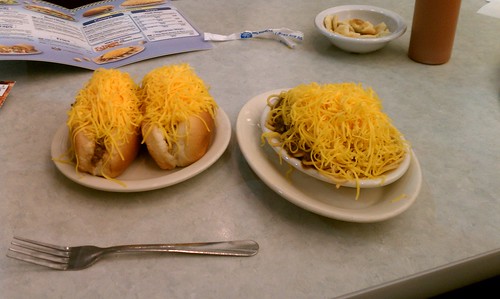 Marlene and the kids settled in for the night and we made the drive to Cincinnati. We had a quick meal at a chain restaurant called Skyline which is a Cincinnati tradition. The two mini hot dogs on the left are called Coneys. The pile of cheese atop meat chili and spaghetti is called a three-way. You can also have a 4-way or 5-way which add beans and onions of your choice. It is delicious but a steady diet of these can probably kill a grown elephant. 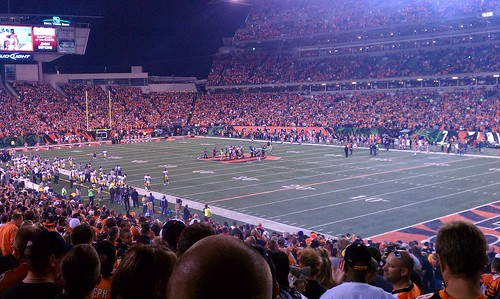 Bengal’s fans are die hard fans. Their heydays are in the 80s when they made it to the Super Bowl twice. Unfortunately for then Bengals, there was this guy named Joe Montana who always got in their way of a win. Tonight the game is against the Pittsburgh Steelers. These two towns are long time rivals and games between them can get very rowdy. It is also the featured Sunday night game on CBS which brought all of the fans out from both cities. Unfortunately for Cincinnati, he rivalry has been a pretty lopsided affair in the recent years. Of the last 11 meetings, the Bengals have only won 2. Tonight, I had a great time with the Trouts but even after leading early, the Bengals suffered another defeat from the Steelers.

Kudos to your gracious hosts! Aren’t Airstreamers the best!

Skyline Chili is a popular blogging topic recently! Check out http://babybloomr.com/2012/10/16/surprising-cincinnati-who-knew/
It’s funny that two of the blogs on my favorites list both post about the same topic a week or two apart!

@Lynda – they definitely are!
@Laura – I had no idea! She definitely experienced Cincinnati the way I only wish I could!

I agree on the Skyline Chili comment by @Laura! My boss from the brewery has a hot dog party every year featuring the specialities from all over the country and this is always one of the staples on the list!