Day 77: Getting our Airstream back from service.

This morning we set our alarm and were ready before the sun even arose at 7 am for the tractor to come hitch up and tow the Airstream back into the service bay. We all crashed early the night before after a long day so we were at least well rested. 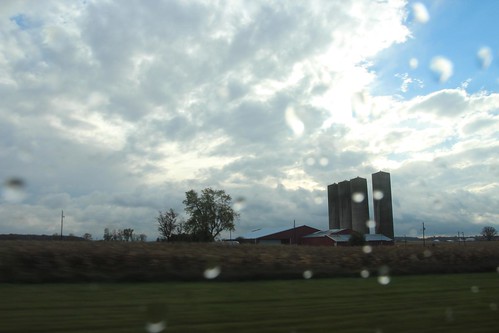 We had to make a decision about whether or not to pay for the plumbing work out of pocket. Basically it was going to be 4 hours of labor and they may or may not be able to do anything about it. From what I have gathered, the black tank flush inlet is like a sprinkler head that dips into the middle of the black tank and sprays water around in an attempt to flush the crud off of the walls and floor of the tank. Just as a sprinkler head would, hard water deposits can build up and eventually clog those nozzles. It really isn’t worth the money to get it fixed as we hardly ever use it. As an alternative, I can always just run a hose into the bathroom and flush the black tank through the toilet. 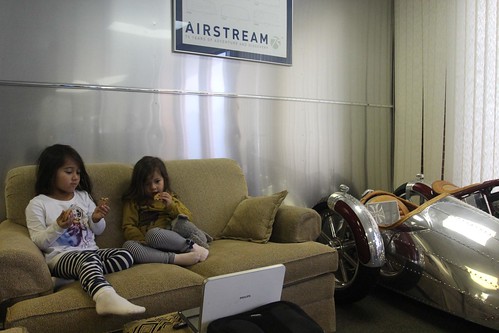 Since we are opting out of the plumbing repairs, we are just getting the brakes replaced, bearings repacked and the exterior light grounding fixed. Oh, yeah, that little light grounding problem… 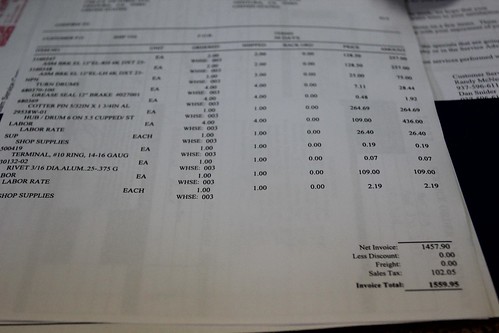 Turns out, our service adviser decided that little grounding problem is worthy of a full hour of labor. I told them to take a look at it, if it’s a simple fix, go ahead and do it. I have done it myself before and it took me about 10 minutes. Here at the Airstream factory service center, it is a $109 job. Ouch.

On the brakes, one of our hubs is starting to show some cracking so it was recommended that we replace it. The other 3 will need to be turned and resurfaced which I assume would just be included in the labor fees. Well, not so according to Airstream. On top of paying for the labor, there is also a $25 charge for turning each of the 3 existing hubs. I am not quite sure how that is in addition to the labor charge. Since there are no parts used in resurfacing those hubs, am I paying $25 per hub as rental fees of the equipment? I suppose I could have discussed it with my good buddy the service adviser but I decided to just swallow it and move on. 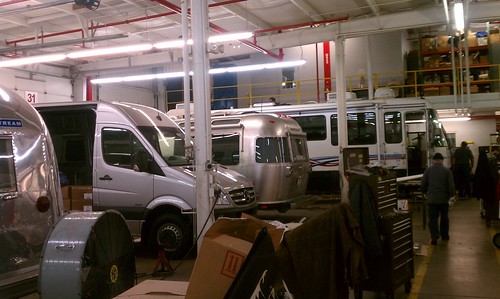 The Airstream policy is that when you are getting work done at the service center, you get the night before, the nights of and the night after your service days for free at the Terraport. Since we had all of the cords and hoses still at the site, we assumed that they would drop the Mish back there when they were done. It is much easier for them to do it with the tractor than for me to hitch up with the van since we have a Hensley hitch. 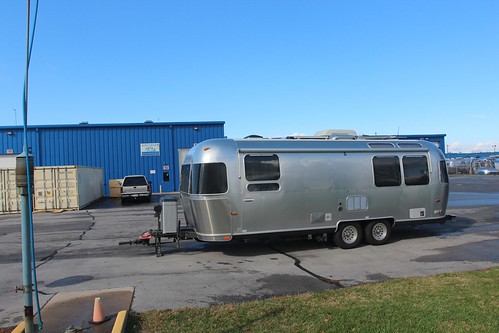 For some reason, they decided to just drop our trailer off next to the dump station when they finished with it. I quickly found my good buddy John Hodgman and asked if he could ask one of his guys to move it back to our site with the tractor since it was right there. He turned and acknowledged me for a moment, and without saying a word, walked away. 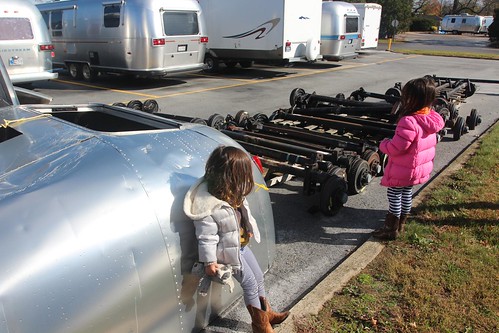 We stood by and waited for him or someone to return with the tractor for a few minutes. After about 10 minutes, he returned and told us that his guys are about to go to lunch and it wouldn’t be done for at least another half an hour. At this point, I am thinking that this is just his way of telling me, “Go effing do it yourself.” We politely replied, “Sounds good, we will go grab some lunch and be back in an hour.” 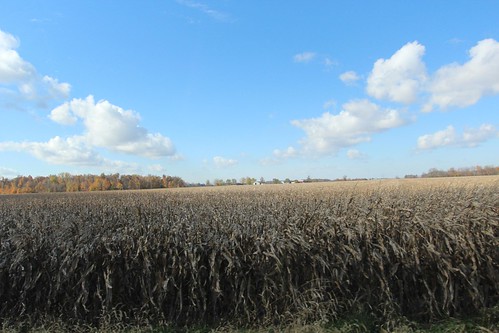 Since we are in middle of nowhere Ohio, it will take us at least an hour to drive somewhere to find food. We had a great meal 2 days ago at The Spot in Sidney, Oh, we decided to go back for round 2. 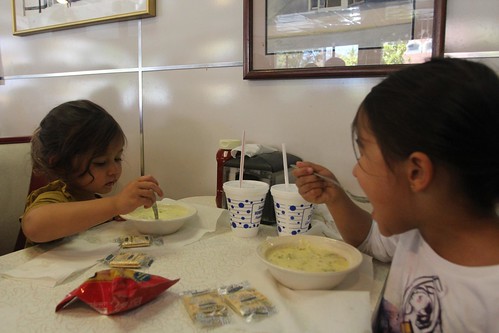 Our stay at Jackson Center has really been a mix bag of good and bad experiences. Meeting up with Kyle, Mary and Kathryn was great. The factory tour was everything we expected. Obviously the unanticipated brake work took out a big chunk out of my wallet but at least they do great work. The worst part of it is dealing with our very rude and unprofessional service adviser. 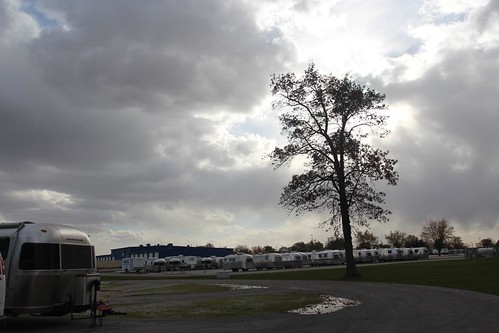 When we got back from lunch, we found the Mish back at the Terraport where they found it this morning. All of the wheels are back on and we are set for another night before heading out tomorrow.

As I looked around, I noticed that the cover for the black tank inlet was not properly put back on. They had removed it to inspect the plumbing work and had simply forgotten to replace it. I walked back towards the service center knowing that I will once again have to deal with ‘Mr. Hodgman’ and was not looking forward to it.

When I walked in, he was leaning back in his chair behind the desk with another service center personnel next to him. As usual, he silently turns and looks at me without  even a simple phrase as ‘can I help you’ nor any change in his facial expression as I approached the counter.

I politely asked, “I think Garrett (my mechanic) forgot to put a couple of screws back on the black tank inlet valve, do you think it’s possible for him to come out and fix that for me?” Hodgman then turns and looks at his colleague for a moment and slowly nods repeatedly to him, “We can do that… right? Yeah, I think we can do that.” HE spoke as if I was asking him for a giant favor. Really? I could have been an a-hole and demanded for the fix since you didn’t put my trailer back together. Instead, I figured asking politely would be the better course of action and here you are, talking as if I am asking you to work for free on a $1600 brake job. 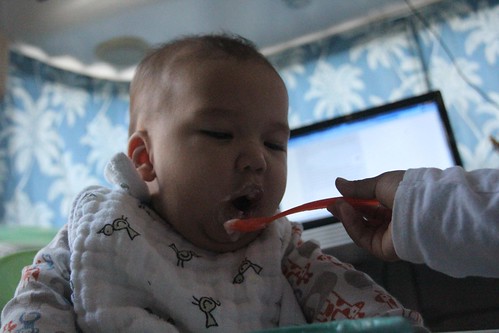 Garrett came out walking towards the Terraport with some tools and I spotted him as I was walking back as well. I slowed down to wait for him and the first thing he said out of his mouth when he caught up was an apology for forgetting to replace the screws. Like I said, everyone else at Airstream has been great. Garrett has been great and each time I talk to him, I learn something new about the trailer I owned for almost 5 years. At $109 an hour of labor, I try to get as much freebie advice off the clock as I can. 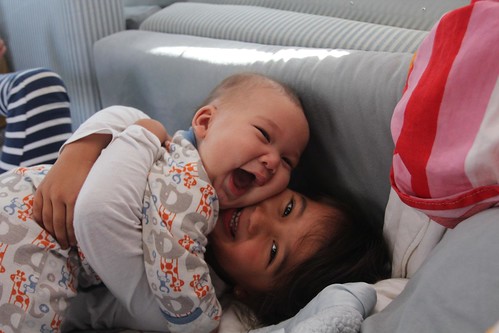 Now the Mish is finally all back together, better than ever, we are getting ready to head south tomorrow to see our new friends Doug and family of Troutstream at their hometown of Centerville, Ohio.

Tonight, our little Luka got a taste of his first solid foods. I think he likes it.

Wow.. I am glad you wrote about your experience.. I am not a fan of people who are in a service position acting like your are gum on the bottom of their shoe. LUKA is so funny in that video. He is just attacking that food!