As we mentioned in yesterday’s post, we are going to be tourists today and go on a bus ride through town. I know that makes some people furl their brows and roll their eyes but I bet those people don’t have 2 kids under 6 and an infant traveling with them across the country in an RV. We try to sit down whenever we can. 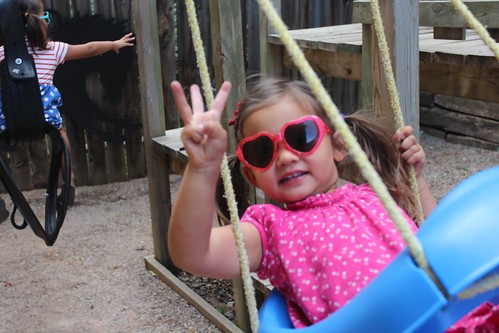 The girls started their morning at the little KOA playground while we waited for the bus to take us into town. As compared to most KOAs, this one leaves a lot to be desired. The playground is just some pieces of wood nailed together in an alley between an old building and a fence. One of the swing is made of an old tire and the other is a Toys R Us special. The girls however didn’t mind it too much. Especially Mila who is going to have her third birthday tomorrow right here in Deadwood! 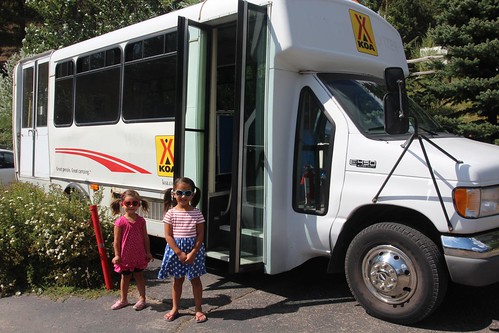 We took the shuttle into town and once again ate some mediocre food at a casino. This one was actually recommended to us by our KOA shuttle driver. Aside from being dirt cheap, there isn’t a whole lot to be impressed with. The girls are easy to please with soup and the potato and cheese soup did the trick. 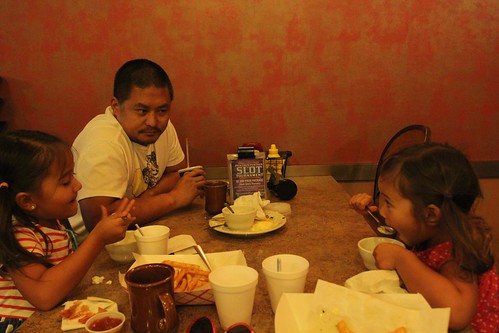 I see the casino and gambling tie in with Deadwood’s history, but no one has managed to pull off an authentic look in a gambling saloon. I think the biggest problem are the slot machines, the moment a slot machine goes into a saloon, it loses the magic of an old western town. But enough of that, let’s get back to what we are doing today, visiting Wild Bill’s grave. 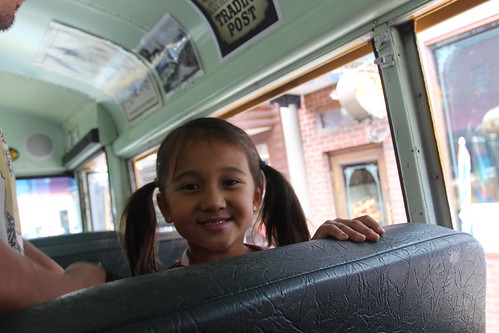 There are several tour companies that run daily tours around Deadwood. The one we choose, for no better reason than that it worked best with our schedule, is the bus tour company owned by none other than Kevin Costner. 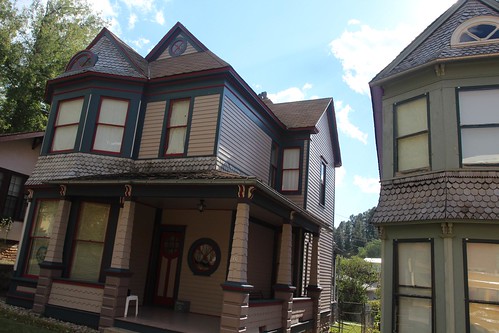 That’s right, THAT Kevin Costner. The one who made the worst movie of all times, Waterworld, and came right back to make a film that won 6 Oscars, Dances with Wolves. It is the movie that brought him here to South Dakota. The movie was shot right around this area in South Dakota and Wyoming. 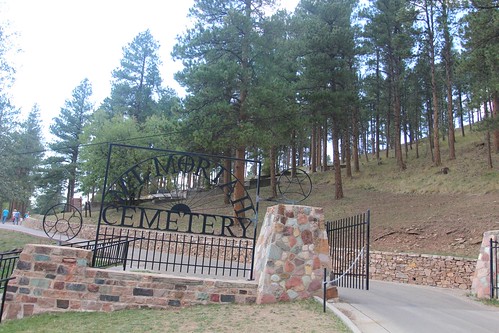 It definitely takes a certain type of person to be a bus tour guide like this one. Our driver was dealing with a pretty tough crowd. No one in the bus interacted with him or chimed in with his questions and answers but he still had to keep it shtick moving along. He gave us a rundown of the history of Deadwood on the way up the hill to the Mt. Moriah Cemetery where Wild Bill Hickok was buried. 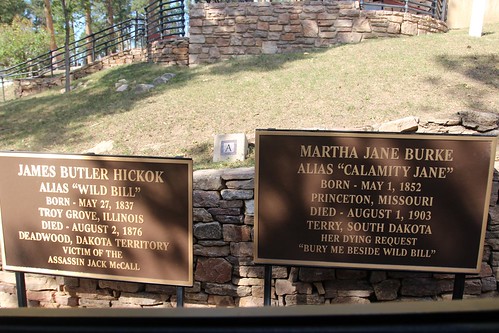 As you may know, Wild Bill Hickok is THE guy who made famous the quick draw duel we have all seen in western movies. He made a name for himself in several fights and came out on the winning end of that all the way to his late 30s. Being a gunslinger in the old west, that is an eternity.

As an avid gambler and often needed to gamble to make a living, he never sat at a table with his back to the door. He felt too vulnerable and he also knew he had too many enemies to expose himself like that. One afternoon on August 2nd, 1876, he desperately wanted to get in on a game and the only chair left at the table is that one that would have put his back to the door. Having no options, he reluctantly sat down. During the course of playing, he asked numerous times to many other gamblers to switch seats with him to no avail. That is when Jack McCall snuck up behind him and pointed a revolver right at the back of his head and sealed his fate into Deadwood’s history.

He was not originally buried here at Mt Moriah Cemetery. The original graveyard of Deadwood at the time filled up so quickly from all of the mayhem in town that on the third anniversary of his burial, Hickok’s good friend Colorado Charlie, paid and had him moved to the current location. Martha Jane Burke, also known as Calamity Jane is buried next to him as it was her dying wish to be next to Wild Bill. 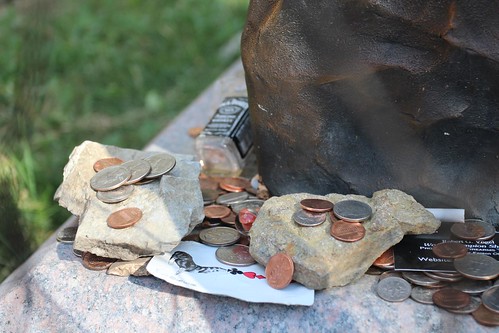 At his tomb, people from everywhere leave gifts of all types for Wild Bill during their visit. Money, playing cards, whiskey bottles are scattered all around the grave site. 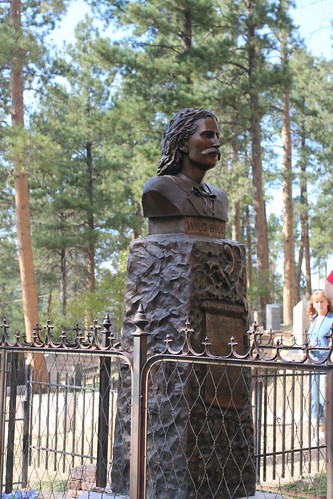 As a cowboy, it is customary to be buried with your boots on and head pointed to the west. Wild Bill was no exception. As most cowboys were religious and believe that if and when there is a second coming, they will be able to just sit right up in their graves, stand up with the boots already on and ride away into the east. 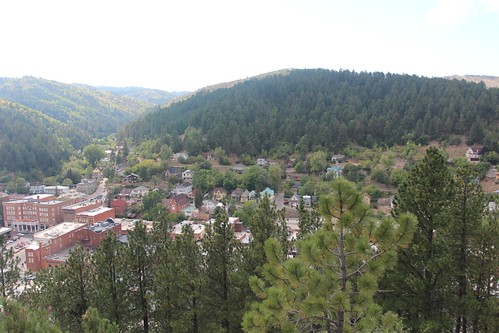 At the top of Mt Moriah, you can get a great view of the entire town of Deadwood. The town didn’t look like this back in 1876, most of the brick buildings you see now are built well after the 1900s. As we headed back into town, we caught the last few minutes of the Adams Museum before they closed to get a little more background on the town. 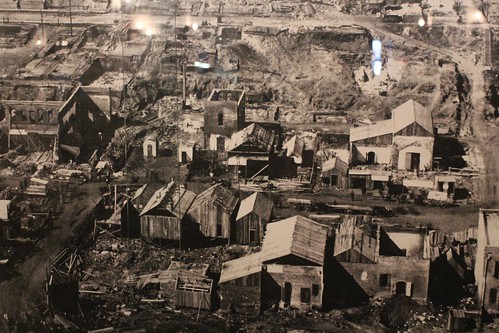 All of the stories surrounding Wild Bill Hickok and the gold rush era are all documented at the museum. This is a photo of the immediate aftermath of the Great Fire of 1879. An unimaginable amount of damage was done during this single event and those new brick buildings are there today because of the lessons learned from this fire. 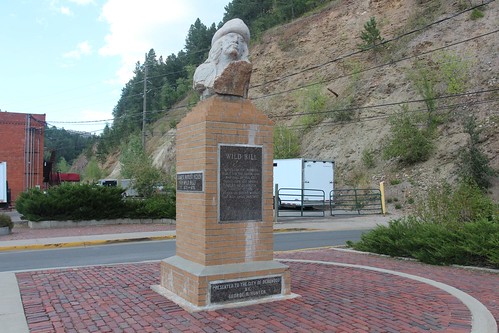 Although today’s Deadwood is nothing like the original town of 1876, it is a significant time and place for our country’s western expansion. Being able to come here to breath the same air and see the same mountain vistas as the gold rushers did nearly 140 years ago still holds a bit of magic for me. 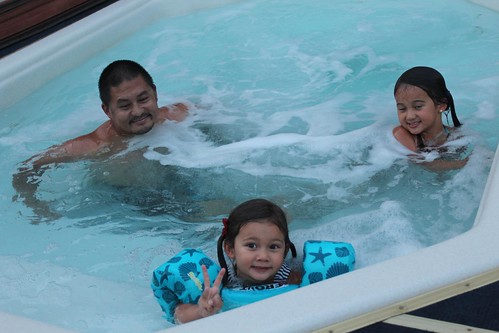 Getting to learn more about the old Deadwood was fun but I think we have milked this tourist trap for all its worth. Tomorrow, we are going to celebrate this little one’s birthday. If you haven’t been able to tell, she has been pumped up about it for a long time. 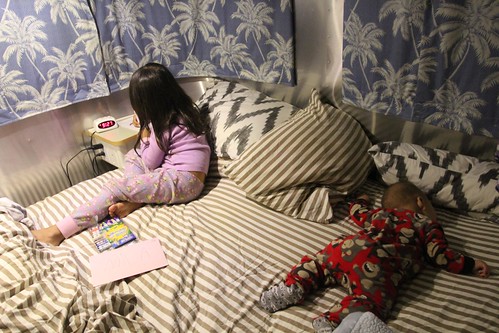 Marlene and Ava have been busy putting together the best birthday party we can for her while on the road. 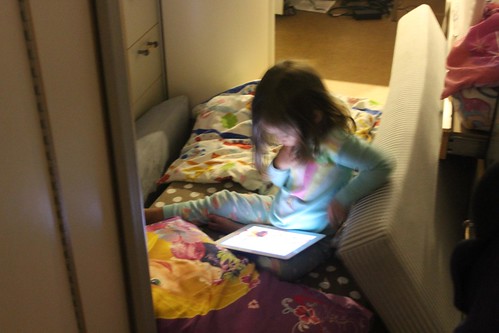 It is tough to keep surprises from each other in such small spaces but thanks to the iPad, she couldn’t care less what the other ladies are doing behind closed curtains. 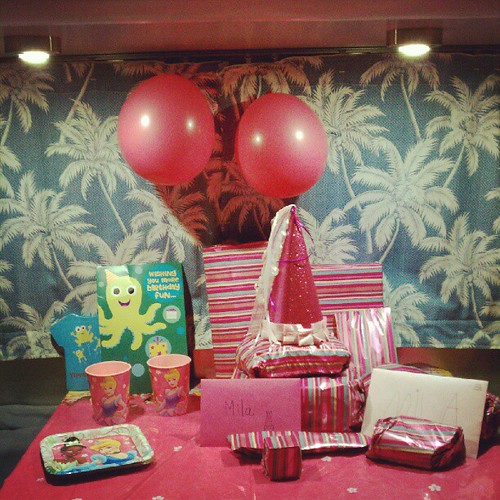 As the girls went to bed, the dinette was decorated with wrapped presents, cards and balloons for our little Mila to wake up to in the morning. We are going to do our best to give her the best 3rd birthday ever.

Dan, we’re with you on this one. Debbie and I ALWAYS take a tour of a new city or site if a tour is available and convenient. How else can you see and learn so much in a short period. We will then go back and visit some places on our own. We don’t furl our brows or roll any eyes on this account.