Today is the official start of the Prevost rally and we are surrounded by million dollar coaches everywhere we look. I would probably guess that there is in the neighborhood of 60-70 of them here. At around a million bucks a piece, we feel like the Beverly Hillbillies being amongst these mobile mansions. 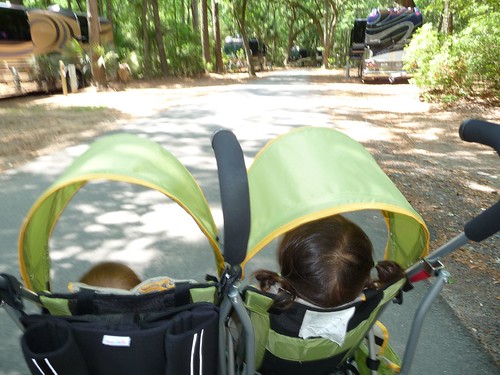 Our Savannah Culinary exploration continued today as we headed into town for lunch. Upon the recommendations of our travel guides, which is having a really good track record with us when it comes to restaurants, we are having lunch at Clary’s. 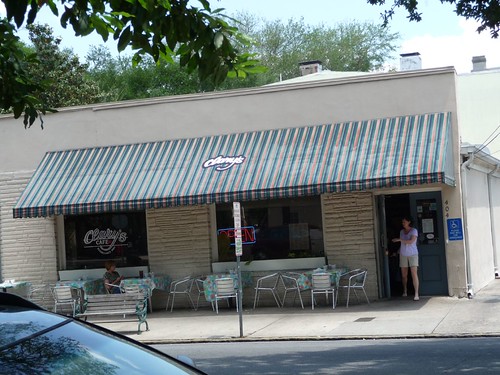 We really need to watch the Midnight in the Garden of Good and Evil. This restaurant also appears in the movie as the gathering place for the characters in the movie. Like the Mercer house, the significance this has in American cinema was lost on us. We were here for the good food that they have been serving up since 1903. 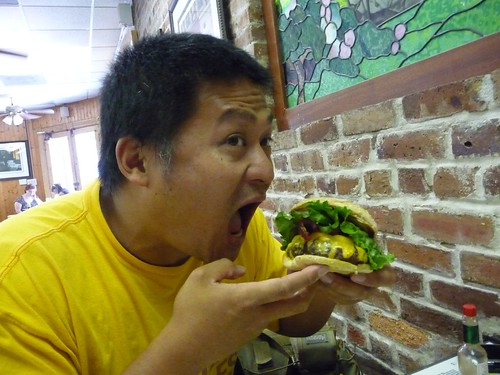 Look at the size of this burger. Once again we were impressed by the cuisine of Savannah. That is definitely something we didn’t expect and is a much welcomed bonus to our visit. 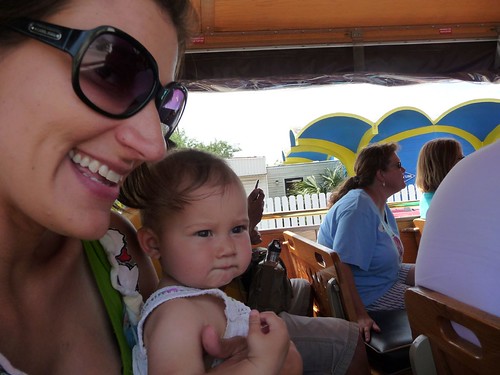 As much as we enjoyed roaming around aimlessly in Savannah, being here for so many days we decided that we would take a ride in one of their many narrated trolley tours. After all, there is only so much self-guided tour you can do before you feel like just sitting back and let someone else do all the work.

Our driver and tour guide was a nice older man who seemed very knowledgeable of the city of Savannah. The tour lasts about an hour and along the way he picks up and drops off people at designated stops as they wish. 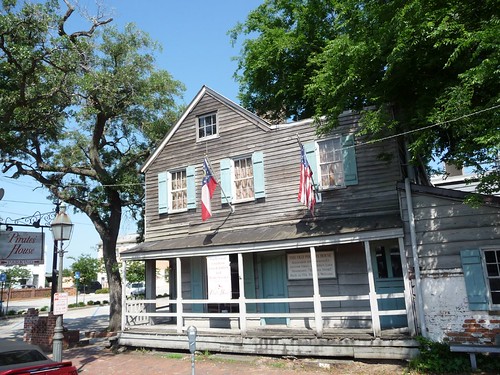 Here is the Pirate House. One of the oldest structures in Savannah and filled with stories and apparently very much haunted. It is now a restaurant and before we are all done with this place, we will for sure get a taste of their southern flavors. 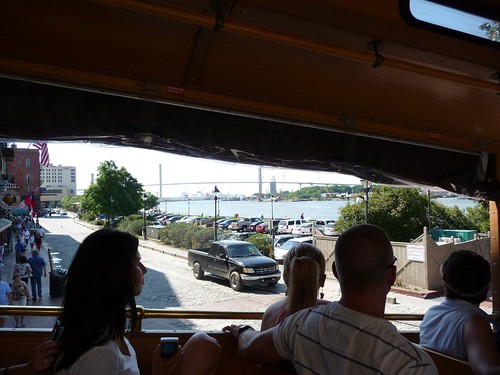 The trolley took us down to the river front which we have not ventured into on our own. Aside from restaurants and shops, it just looked like your typical tourists trap. 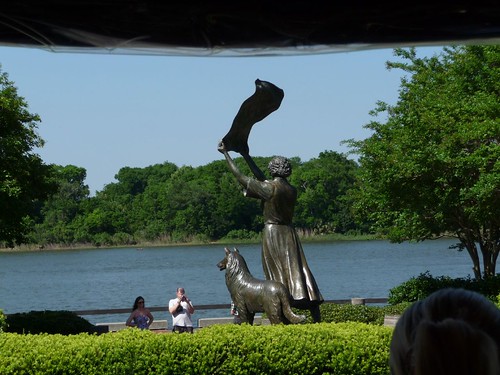 On one end of the river front however is a well known sculptured called the waving girl. The story behind her is supposedly based on a real woman named Florence Martus who waved at ships that went by here every day for 44 years. At first she was waving in hopes that one day her lover would be on the ship as it sailed by. After awhile, she has just become a creature of habit. 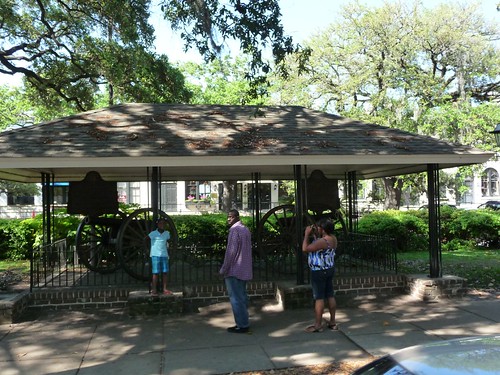 Here are the two cannons named George and Martha. Named after the first president and first lady of the United States. 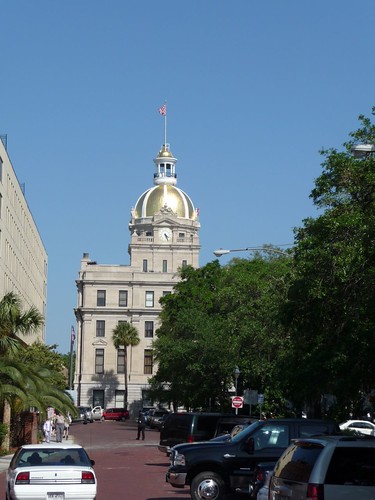 Atop of the Savannah city hall, the golden dome is actually coated with real gold. In all, there are roughly 9 lbs of gold on the dome. In today’s gold market, I would be worried about people scaling the dome and scraping the gold flakes off. 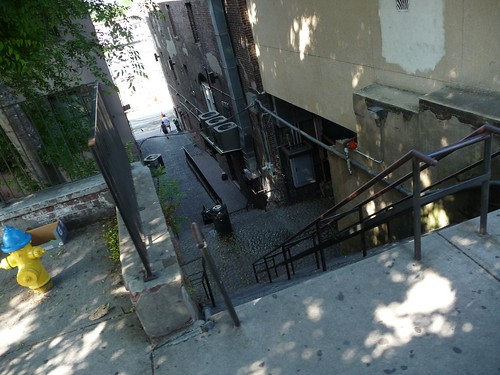 We drove by some of the steepest steps I’ve every seen here towards the end of the tour. It takes you down by the river front. Since Savannah was a planned city and when General Oglethorpe, the city’s founder, looked for a place to build the city, he picked the highest ground closest to the river. Not sure what kind of historical significance the steps have but the tour guides love showing it off. 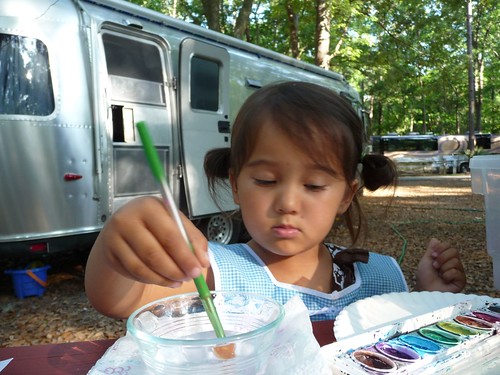 We called it a day early and went back to Skidaway Island so we can spend some time relaxing at the park. Since we bought our trolley tickets after a certain time in the afternoon, we will get to go back again tomorrow and use it again all day long. Plus we have never camped at a Greyhound bus depot so this is as close to it as we can get. 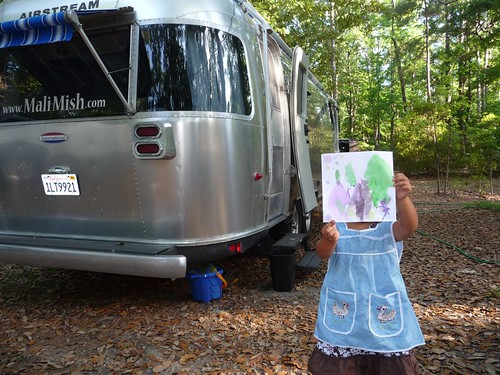 Here is Ava’s impressionistic painting of the Georgia forest. Thank you very much.

Don’t bother with the movie Midnight In The Garden of Good and Evil — read the book. As usual for books-made-into-movies, it is far better. And that’s speaking as a fan of Clint’s directorial skills!

I bet the book is much better than the movie. Maybe when the kids are a little older we will be able to have some time to once again enjoy some quiet time with a book! So happy for you guys to be on the road again. We are not sure if Alumapalooza is going to work with us still since we are getting ready to head west into Tennessee tomorrow and it is still 2 weeks away. It would be nice to meet up with you guys on the road if somehow our paths cross but it looks like we might be too far south of your planned route. I will keep in touch to let you know for sure.