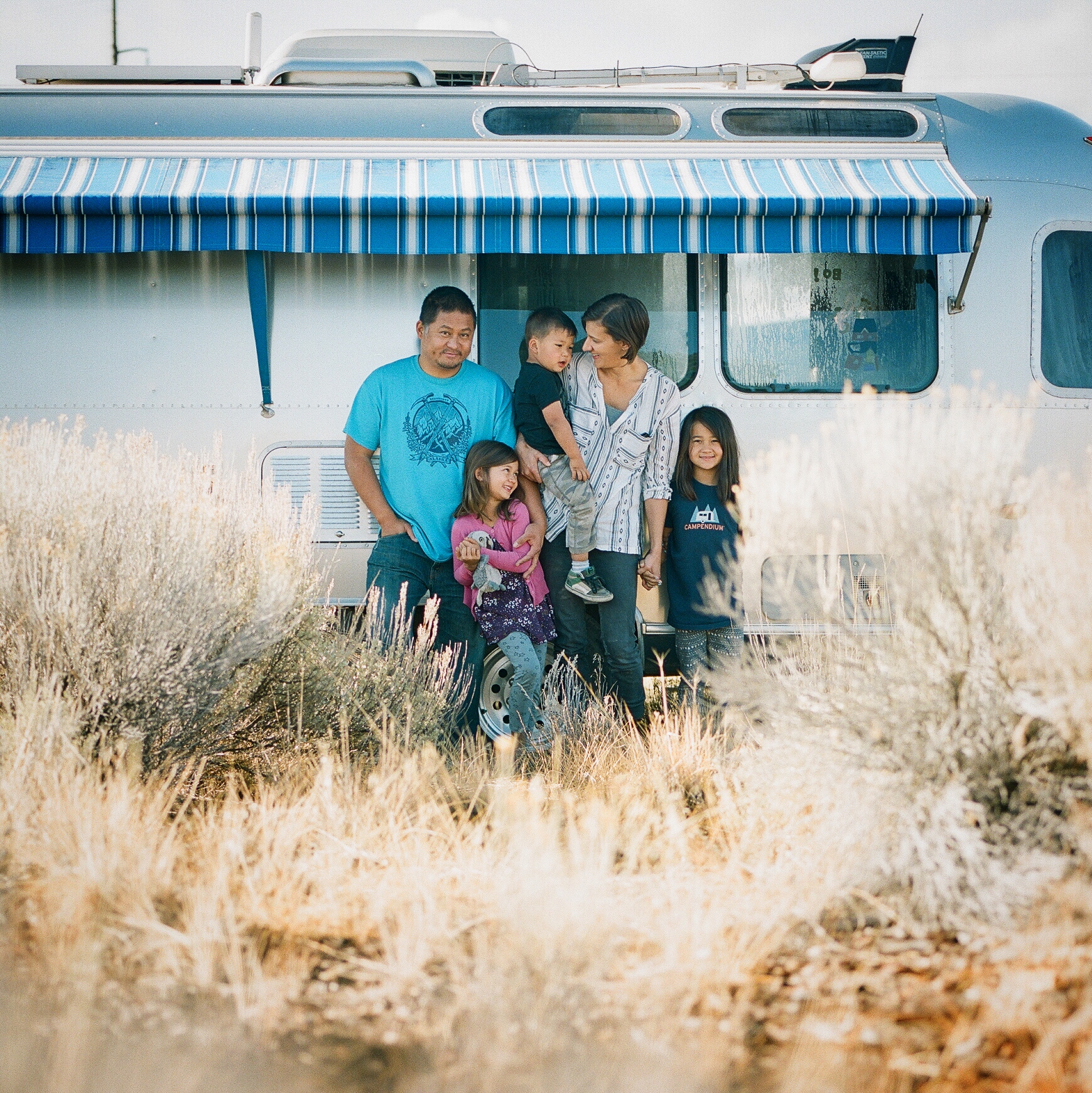 Hole in the Ground, Oregon.

Thank you for visiting MaliMish.com. We are a full-timing family of 5 living, working and exploring the world in our home on wheels. If you were wondering, the name Mali Mish (pronounced ‘Mah-Lee Mish’) is Croatian for ‘Little Mouse’. It’s a name bestowed on Marlene by her grandmother and we randomly chose it to be our blog name. Little did we know that the age of social media was on its way and that we would be referred as the Mali Mish Family for the next 12+ years. Yes, you read that right. We have been living on the road since 2008, when there was no such thing as Instagram or mobile hotspots or vanlife. There were no short-cuts to this lifestyle. No YouTube tutorials, no e-books, just a handful of other full-time family blogs here and there. So we did what we had to do. We figured out what worked best for our family and did it.

In 2008, we bought our first rig, a 2007 Airstream International 25FB Ocean Breeze. We started this blog back in 2007 when we were new parents to our 9-month-old baby girl Ava. Our family had grown from 3 to 5 with the addition of little sister Mila in 2009 and baby boy Luka in 2012. For 7 years with the Airstream, we traveled across the country from California to Florida’s Key West to the tip of the Maine to the far corner of Washington State, and everywhere in-between. Once we visited all of the lower 48 states, we spent an awesome summer in Alaska. Our time in Alaska was life changing and caused us to re-evaluate our traveling lifestyle. 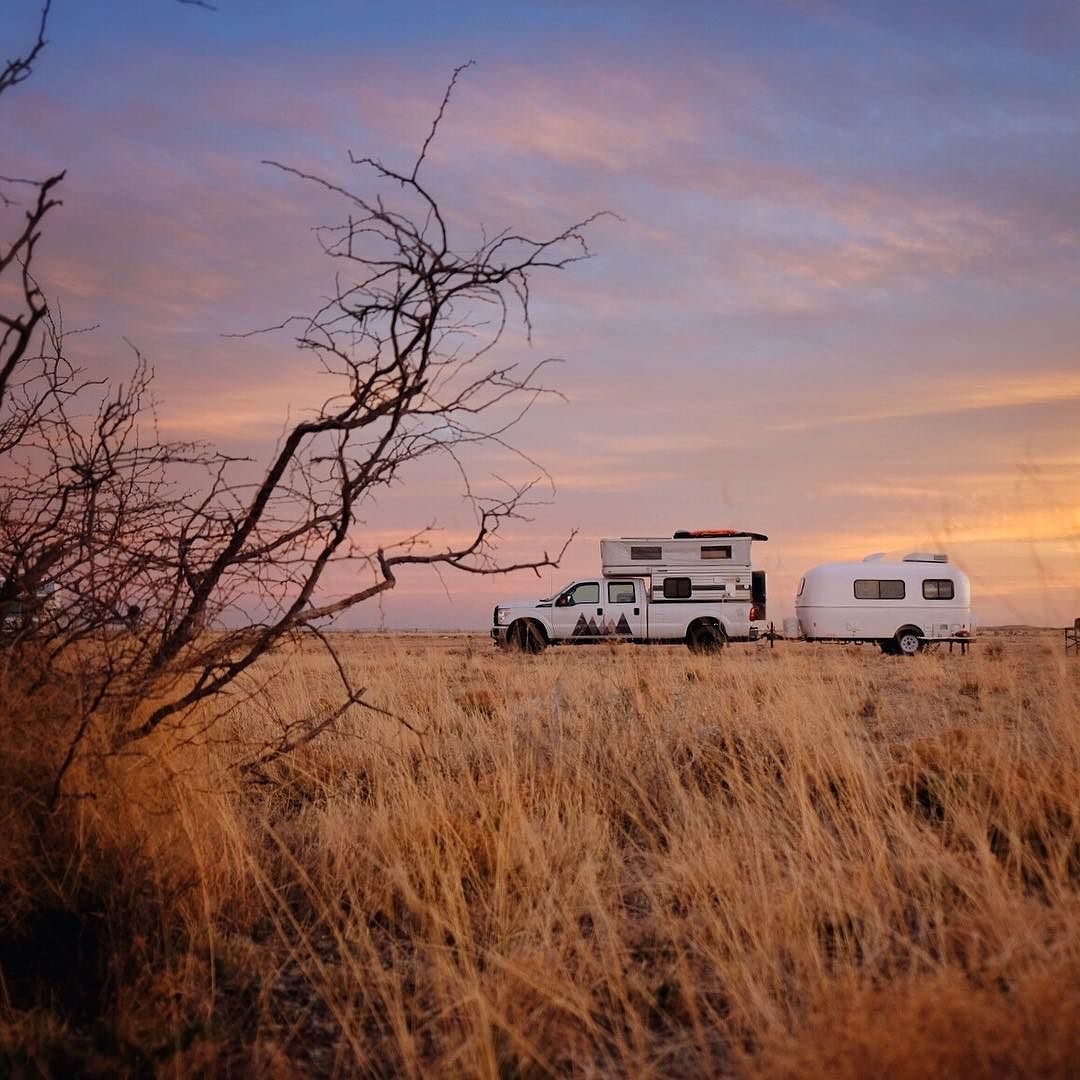 So in 2016, we decided to store away our Airstream and bought a 2015 Four Wheel Grandby truck camper on a 2016 Ford F250 long bed. For the next 3 years, we pulled ourselves out of our comfort zone and pushed our adventure further into Baja and Mainland Mexico and into the Canadian Maritimes, Newfoundland and Labrador. We also had a little stint with a 2017 Casita Spirit 17 Standard for a year when Dan needed some quieter office space. After all those miles all over North America, we felt like it was time to make another change.

Europe (and little of Asia and Africa too) 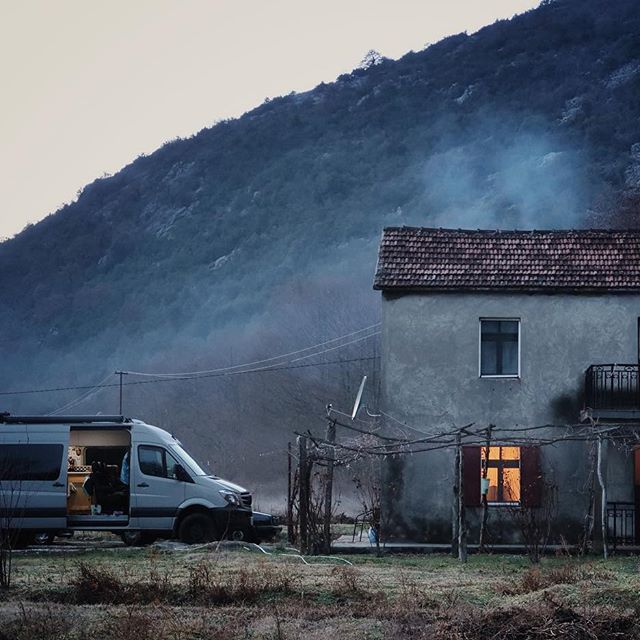 Then in 2018, we decided to shake things up once again. We built out our very own rig, a 2017 Sprinter 4×4 crew van 170. After a quick 30-ish day self-build, we drove it from California to Maryland, threw it on a boat across the Atlantic Ocean and continued our travels around Europe, on September of 2018. As of August 2020, we have driven to a total of 32 countries including Turkey on the Asian continent and Morocco on the African continent. Our initial plan was to stay in Europe for a year or two but now we are keeping it open ended.

As long as everyone in the family is on the same page, we don’t currently see an end to our travels. But I do see adding or switching gears again. Maybe a new continent, maybe a sailboat, but always together, where we are our happiest.

The Cast and Crew of Mali Mish 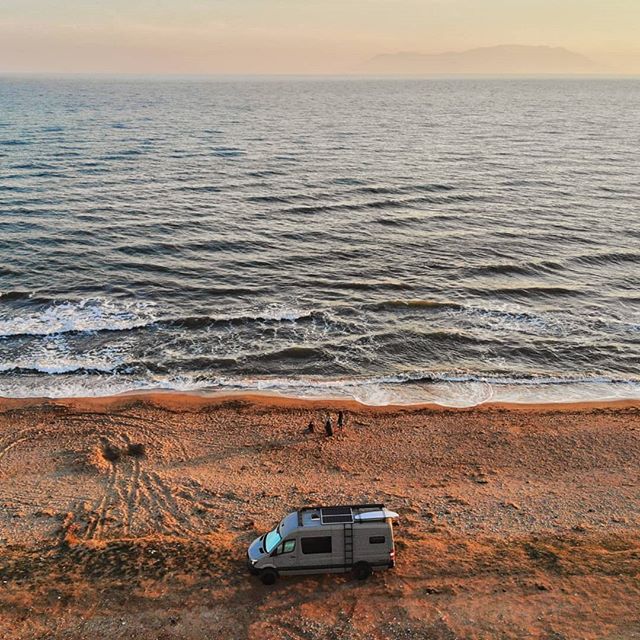 Our current rig is a 2017 Sprinter 4×4 crew van 170. We joked about building a van around an extra fridge we owned so one day went online to build one out with 5 factory seats, 4×4, a tow hitch, and in the color Stone Gray. For fun, we went to the closest Mercedes dealership to us and low and behold that same exact van we built online was sitting there. Someone in California special ordered the van and a year later when it was delivered to the dealership, they backed out. We took it as a sign. Then, we spent 30 something days to build out the empty cargo van. The layout was the easy part since we have been living small and on the road for so long. We knew exactly what we wanted and had to figure out how to get it down. We opted for permanent bunks beds, a small kitchen, a portable toilet, 350-watts of solar and an outdoor shower. We parked it in front of Marlene’s parents house in Los Angeles and did the best we could. We are really proud of how it turned out and how well we all worked together. 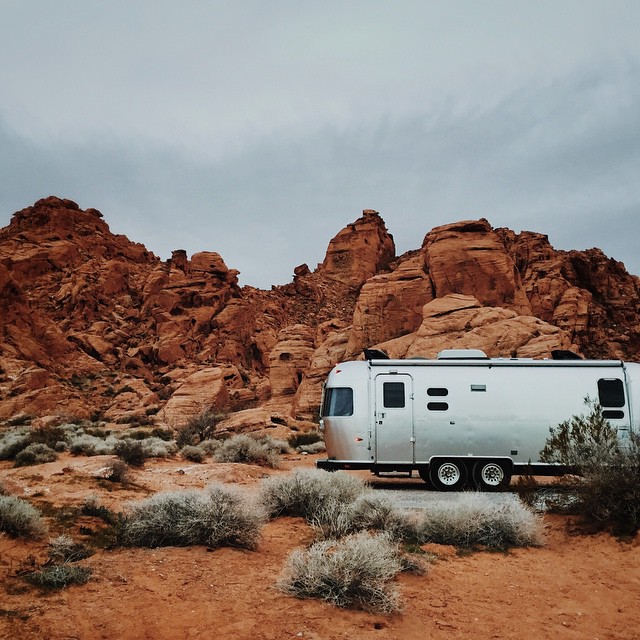 Our first rig was a 2007 Airstream International 25FB Ocean Breeze travel trailer. We found her in southern California when her dealership went out of business and had all of their inventory repossessed. Through the help of another Airstream dealership, we were able to purchase her for a great price while keeping all of the benefits of buying a new trailer from an authorized Airstream dealership. She came loaded to her teeth with options and we have since added 300-watts of solar panels to help in our boondocking adventures. Our 2007 GMC Savana Extended Diesel custom van was the other half of the dynamic duo that keeps us rolling along safely down the road but when its turbo blew on the Jasper Ice Fields we switched to a 2015 Ford f250 diesel truck. Our Airstream spent some time as a room at Caravan Outpost in Ojai, California and is currently in Arizona as an AirBnB. 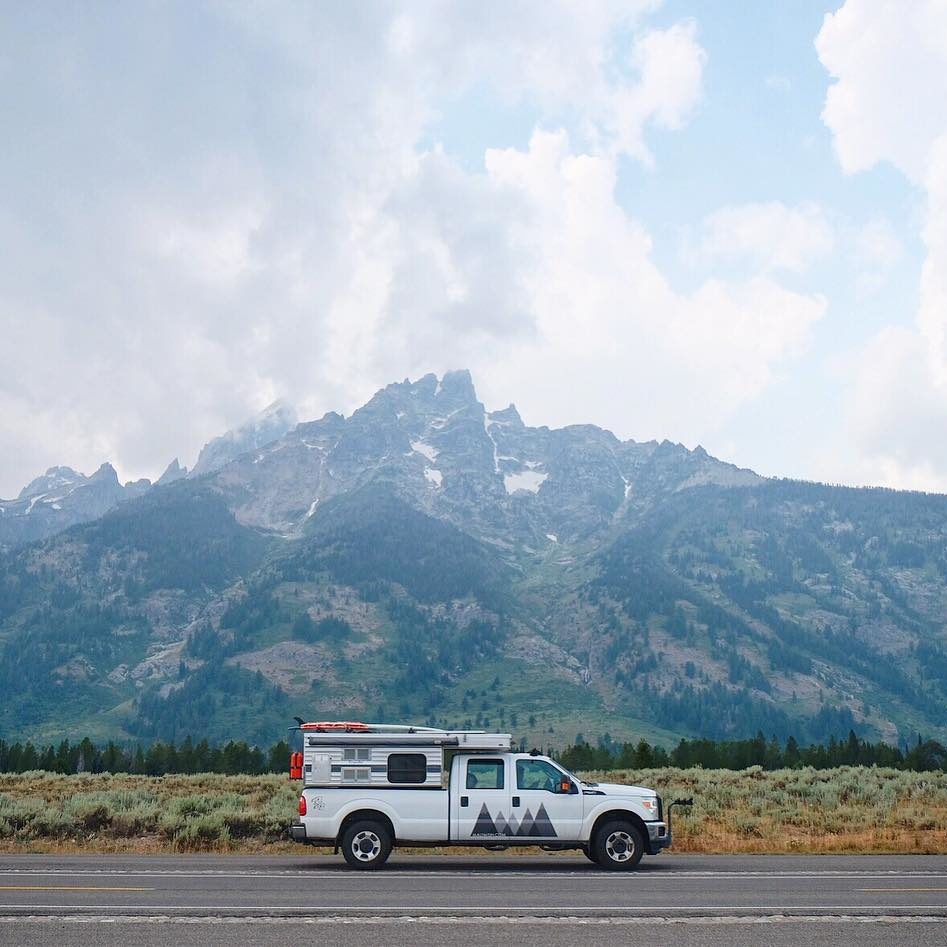 After a summer in Alaska, we felt like the Airstream was holding us back from spots we wanted to camp. It also started feeling too comfortable, like we were in a house again. So we down-sized to a 2015 Four Wheel Grandby truck camper in silver in December of 2016. We put in an order to get one built, picked it up from the FWC factory in California, outfitted it ourselves for long-term boondocking, slapped some stickers on it and crossed into Mexico, all in a few weeks time. That camper took us all the way down to Mexico, close to the Guatemala border, where we decided to not go any further south due to some ridiculous GVWR law that was being misinterpreted and causing 3/4 ton trucks like us to not be allowed back into Mexico. We took as a sign to change plans and drive to the northeastern most corners of Canada instead. 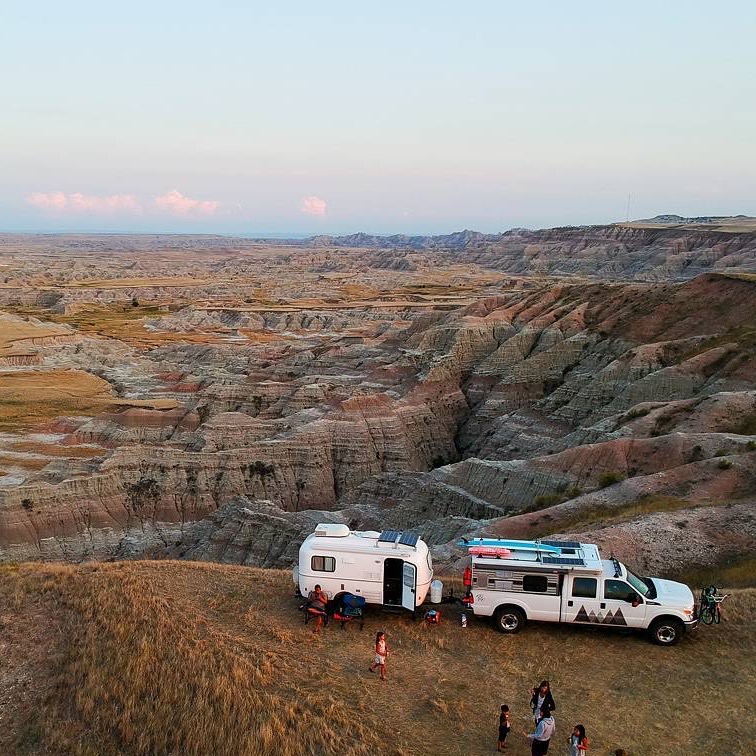 At the beginning of 2017, Dan was craving a quiet space to work. In Mexico, the weather was awesome and it was easy to set up a table outside to work at it or to kick the kids outside to play. But when the weather wasn’t ideal, we couldn’t do that so we bought a 2017 Casita Spirit 17 Standard to tow behind our Four Wheel Camper. We opted for the less popular option with no front bathroom and in its place had the bunk bed option so we could all fit in the trailer together. The Four Wheel Camper then turned into Dan’s office space and an occasional home again when we ditched the Casita for cheaper ferry rides in the Pacific Northwest. In March of 2018, we sold both campers. The Four Wheel camper was sold to a fulltiming Airstream couple we know as their secondary adventure rig and the Casita was sold to a couple from Wyoming who take it on Baja adventures. 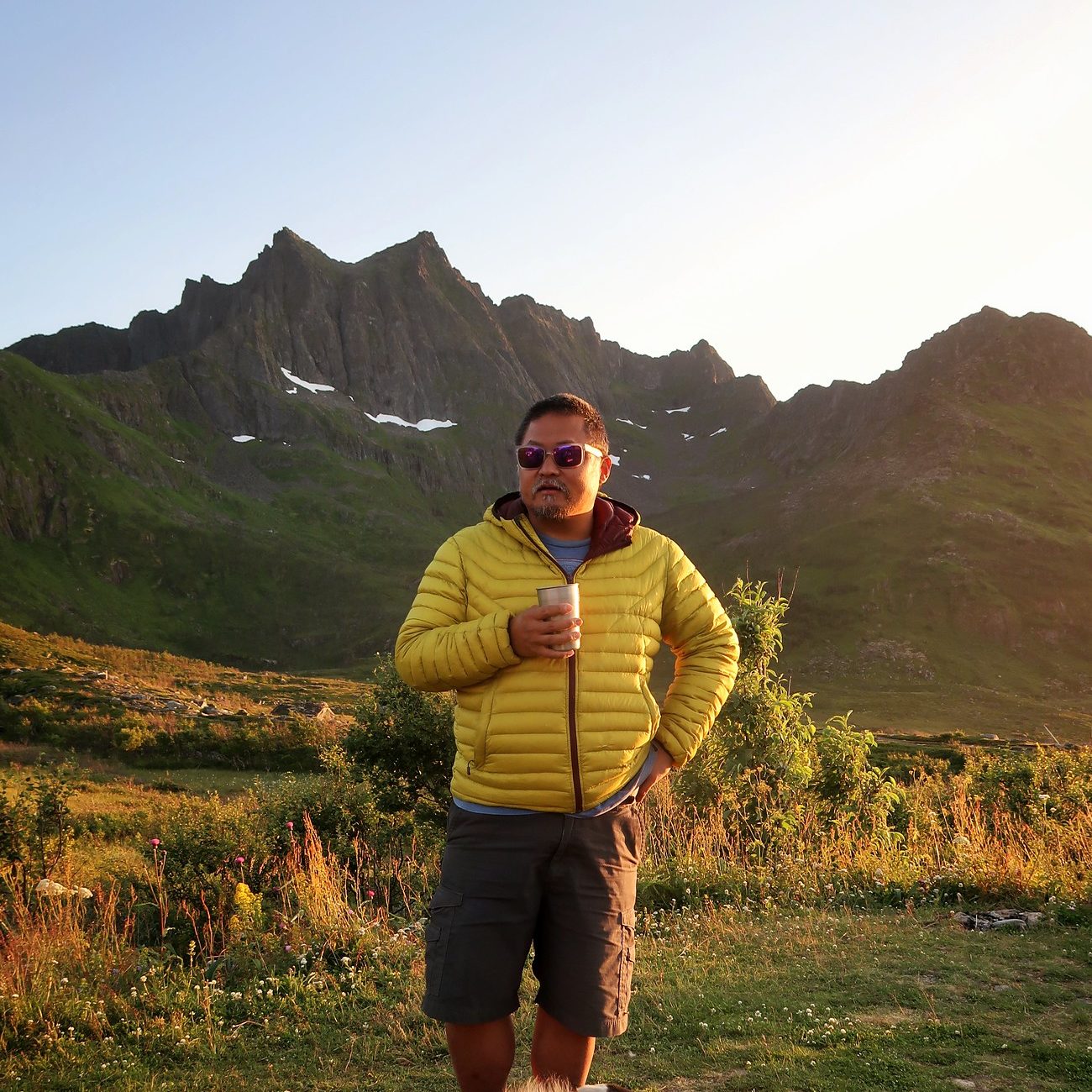 When Dan is not chauffeuring around his family of 5, he can be found looking down at his phone trying to find the next great boondocking spot. As a remote web developer, he is able to work on the road to support his vagabonding addiction as long as there is some way to jack him into the interwebs. He enjoys surfing, obsessing over our solar input, and learning new things from the University of YouTube. His favorite places to visit are somewhere in the Smokey Mountains of Tennessee and North Carolina, Alaska and Newfoundland. 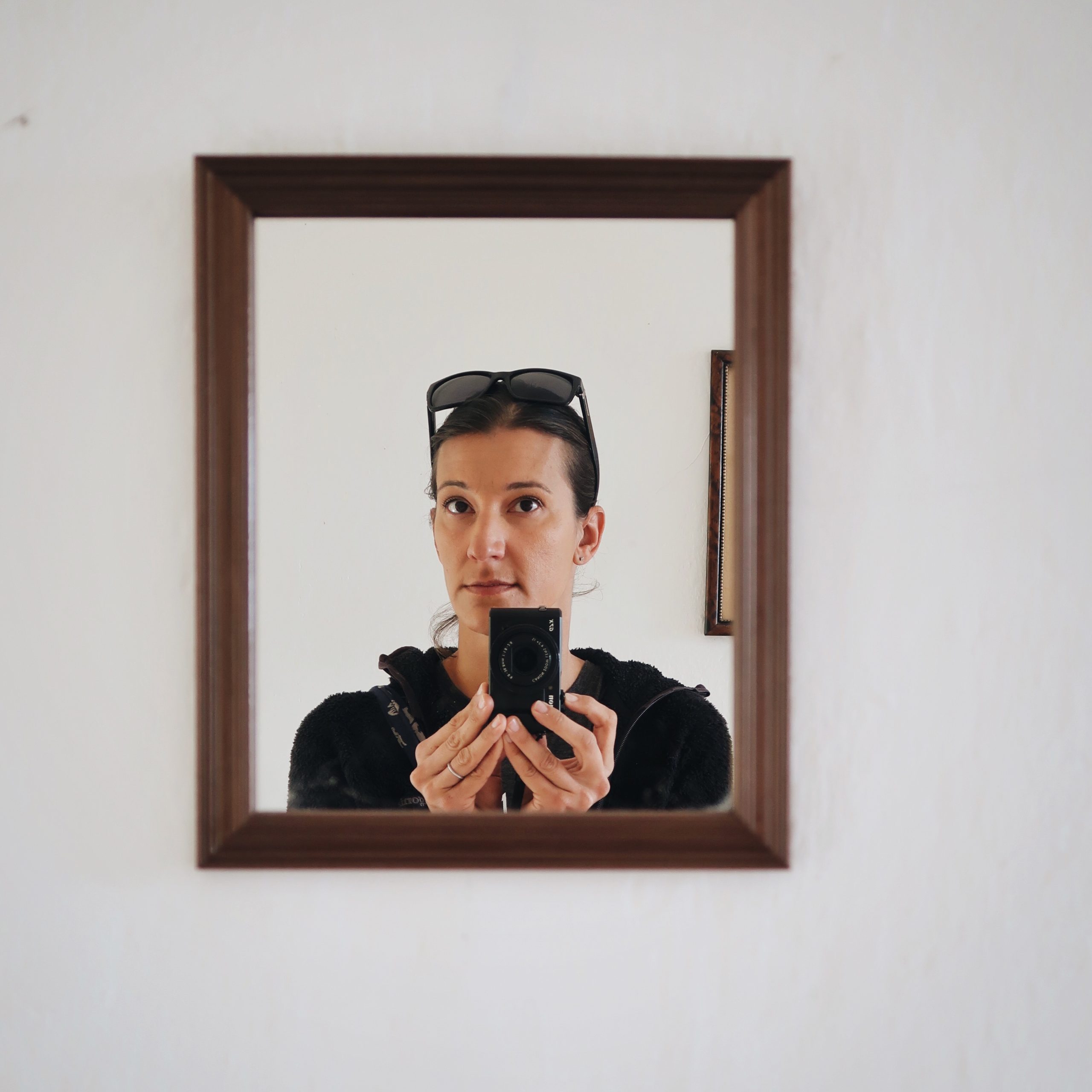 Marlene is born and raised in southern California. After spending her entire life living in the golden state, she finally hit the road to see where the rest of America and the world lives. As the daughter of Croatian immigrants, she is credited for naming us. You can find her homeschooling the kids, checking birds off of her life list or documenting our lives with a camera in hand.  Her favorite places are The historic and beautiful Savannah, Georgia, the beaches of Baja and the little villages of Dalmatia. 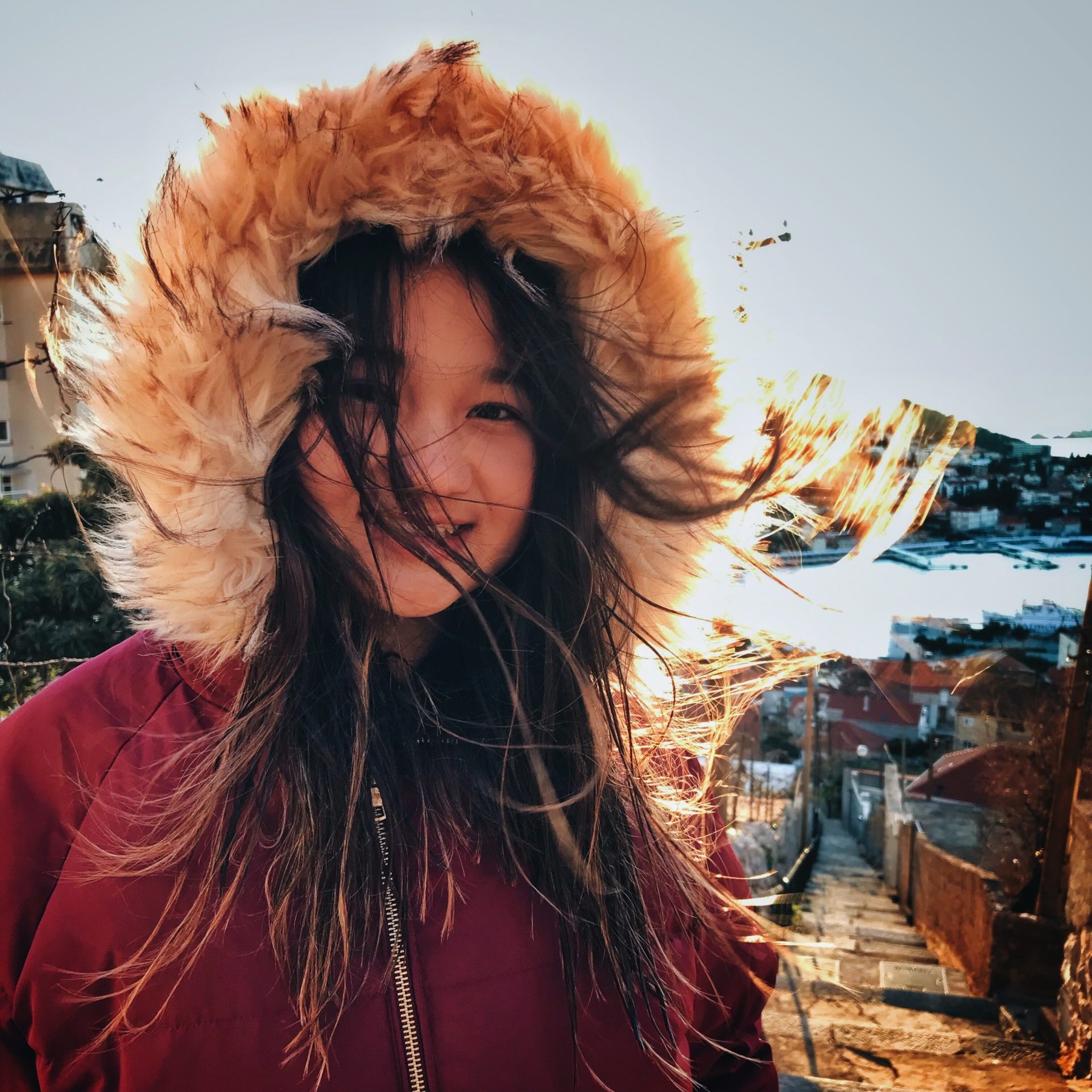 Ava is years old and loves art, the color turquoise, and animals. As the big sister to Mila and Luka, she leads them into lots of shenanigans on the road whenever the opportunity arises. Her favorite activities to do while we’re traveling are swimming and snorkeling. Her favorite destinations so far are Hope, Alaska and the Adriatic Sea. 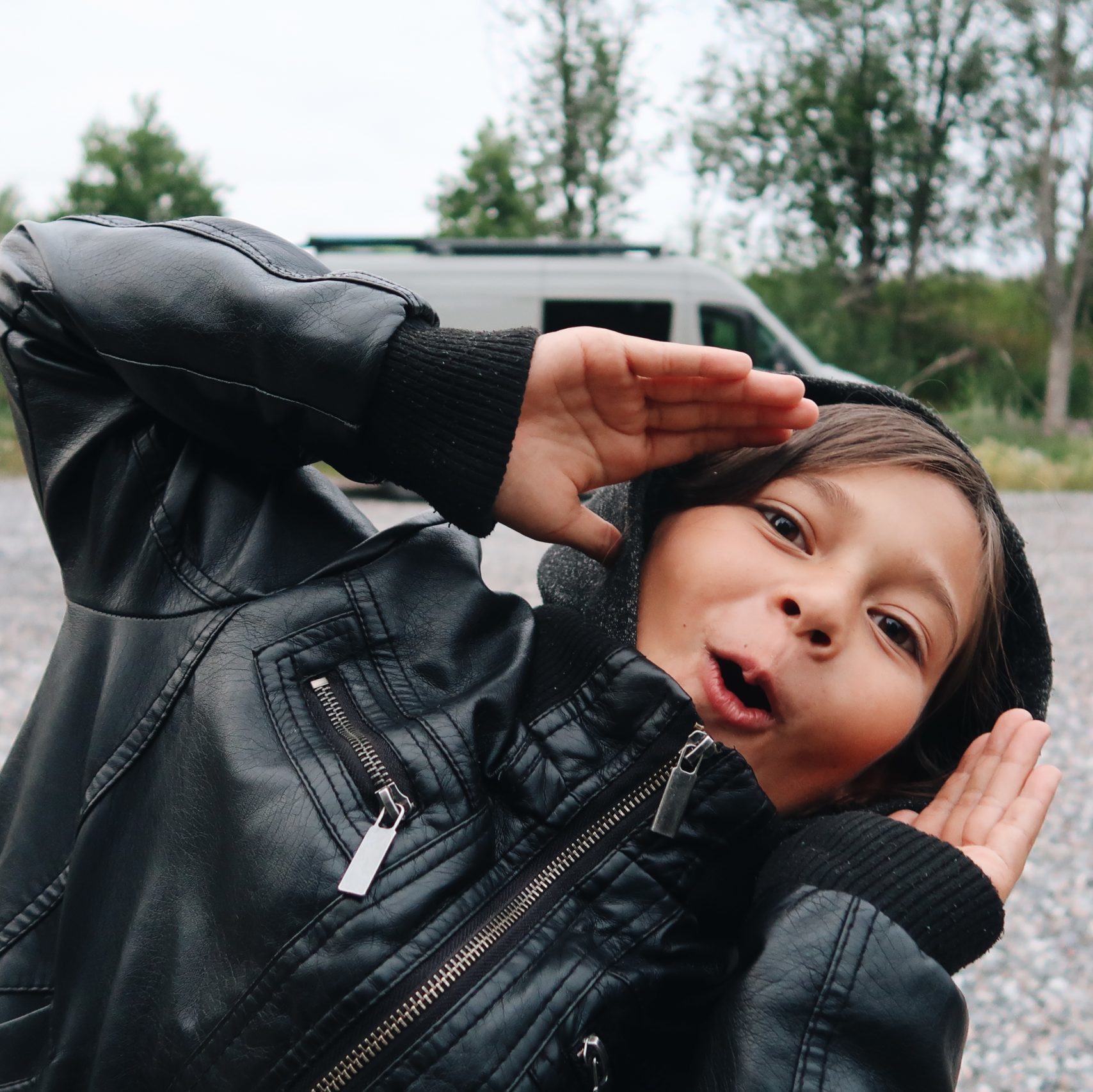 Mila is years old and spent the majority of her life on the road and is a road tripping veteran. She loves her stuffed owl friend ‘Chukie’, and one time she accidentally left him at frozen yogurt place and we had to drive back to find him. This has happened many times.  Her favorite activities include making bead necklaces, eating green apple flavored ice cream, sewing, and swimming. Her favorite animals are sloths, cats, and owls. Her favorite road trip stop was spray painting cars at the Cadillac Ranch in Texas. 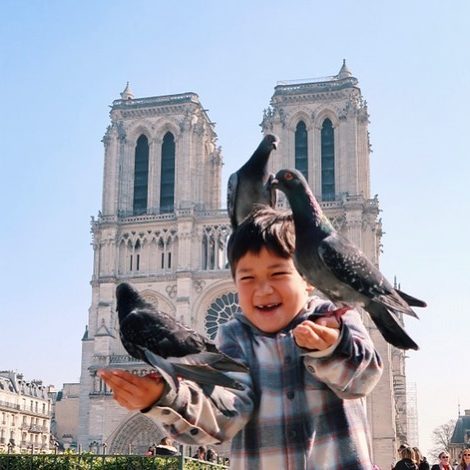 Luka is years old and had 49 US states under his belt by the age of 3. You can find him trying to keep up with his older sisters, using his favorite grappling hook or asking if you need any help. His favorite things are dragons, space, science and his Nona and Dida. When asked what is his favorite stop, he responded with “The Space Museum in Washington, D.C.” 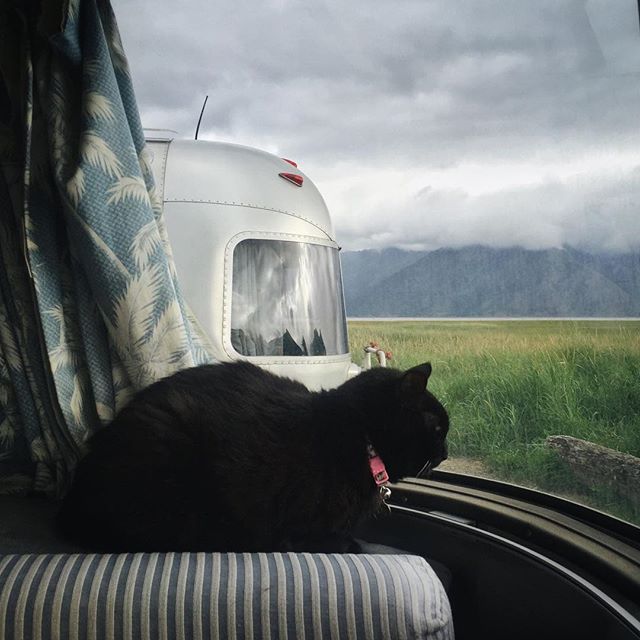 (2002-2018) Yoda the cat sat by this Airstream window and witnessed countless sunsets and breathtaking views most people could only dream of seeing. And when we switched rigs, she found new windows to soak up the sun’s rays. She’s traveled to all 49 drivable US states and 4 countries with us. Her health was failing as she turned 16 years old but hung in there to make the trip to Europe with us. She passed away during our first full day in Europe surrounded by our love and tears and her ashes are still traveling with us everywhere we go.

Little films made about us

Just passed you on the 10 fwy in palm springs on the way to airstream show at the RIviera Resort.
Love your blog. We are about a year behind you re fuLl time trippers. Just starting research on motor coaches. We have 2 dogs, 5 kids, 5 grand kids and ready for a new chapter. Will be launching our website in 2 months. Would love to stay in touch!! HAPPY travels….

Hi Dan & Marlene,
We are your neighbors in the Safari 17 in site 2 at Lake C. On our first trip in our AS from Vancouver B C. When I saw your AS it seemed familiar. Then I remembered! I had seen your backing up video on u tube! Still no good at backing up yet, need more practice! Love the blog.

Spotted you just before you got on I64 eastbound in Louisville, KY.

Glad you ran into Will Oldham 😉

Thanks for the update, Love reading blogs as they’re more informative.

[…] you probably saw in our About section, our desire to hit to road intensified when we lost our dearest friend Rudy. It’s been a year […]

[…] no secret that I am in love with General Hospital. It’s written right there in my bio for the whole world to see. I’ve been watching that soap opera since as long as I can […]