Ingo Rademacher (aka Jax) and his Airstream.

It’s no secret that I am in love with General Hospital. It’s written right there in my bio for the whole world to see. I’ve been watching that soap opera since as long as I can remember. Seriously. My mom would pick me up from elementary school at 2:35pm and we’d race back home in her gold Firebird (vroom!!!) so we could hunker down to watch the last couple segments together.

My love for that show is so bad that I actually follow most of the actors on my personal twitter feed. Dan thinks it’s ridiculous. At first, I added my actor “friends” to our joint Mali Mish twitter account. He got a little fed up and banished all my “friends” to my personal account. Curse you, Dan!

But then a little miracle happened. One of my favorite dudes, Ingo Rachmacher who plays Jax, asked all his twitter followers this question:

Oh snap! And what did shy little ol’ me do? Well I *might* have tweeted him back and I *might* have mentioned a certain person’s name that maybe had a few (million) connections. Oops. Did I do that?

And then I officially added him to our Mali Mish twitter feed. Take that, Dan!

Now I get to follow his Airstream adventures with his beautiful wife and cute little kid via twitter. And tweet with him. My grand total numbers of responses is now at a whopping three. THREE! And chuckle as he learns the ways of us Airstreamers.

And peek at some pictures too! 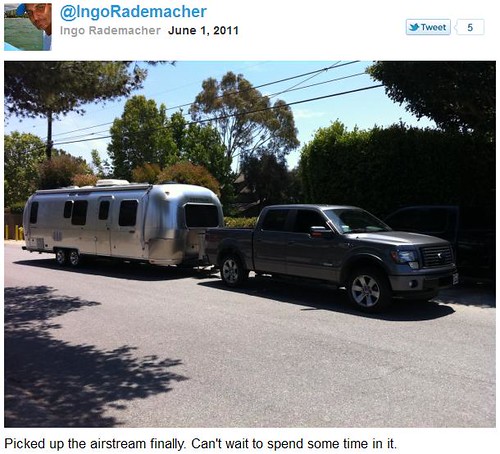 And hope that some day we will cross paths in our Airstreams. And maybe, just maybe I will tell him about our 6 degrees of separation.

I heart GH and Mali Mish!

i don’t watch GH but!!! i love it… seriously LOVE it (; when other people have major crushes on tv shows because i myself have several, hey they wouldn’t make tv so good if we weren’t meant to watch it.. that’s my story and i’m sticking to it! anyway, i love northern exposure and the cosby show and bones and well, i’ll stop there, but lets just say i have dvds of my favorites. enough said.

A little late to this post but you can tell Ingo that I have done the same thing. I came back from using the restroom at a DQ only to realize I was towing my private bathroom.

[…] it has an article in it about my favorite General Hospital veteran, Ingo Rademacher…aka “Jax”… and his customized bunkhouse Airstream and beautiful […]