Our short 2-night stay at Saint Joseph Peninsula came and gone way faster than we had hoped.  This is definitely a spot I can see myself spending at least a week at next time we are in the area. With still a handful of places to see in the panhandle before crossing over into Alabama, we headed back towards the mainland and kept on moving westward. 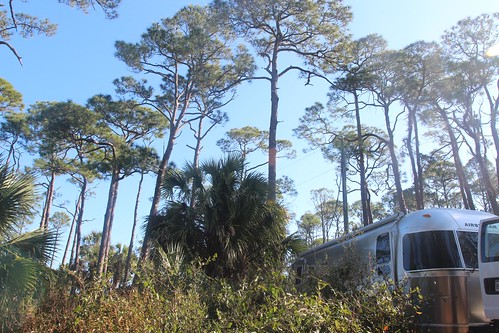 Today’s goal is to check out a neat little town we have been planning to see for a long time. We skipped right past Panama City since we had already stayed at St. Andrews State Beach during our last visit. We are headed over to the little town of Seaside, FL along the the Florida Scenic Highway 30A. 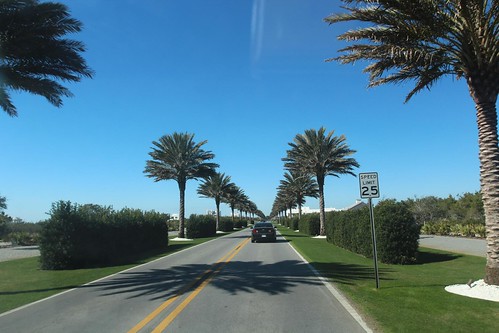 The stretch of 30A that is popular with tourists and visitors throughout the south and midwest starts with a town called Rosemary Beach. Many of these little towns are planned communities that just a couple of decades ago did not exist. 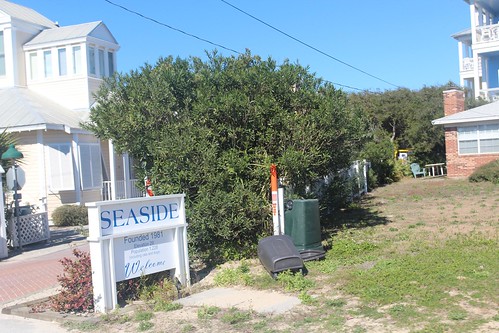 The town of Seaside was founded by a Californian from San Francisco back in 1981. Apparently he was a fan of Airstreams and rumor has it that the town legally allows a property owner to use an Airstream as a primary residence on any piece of residential land. 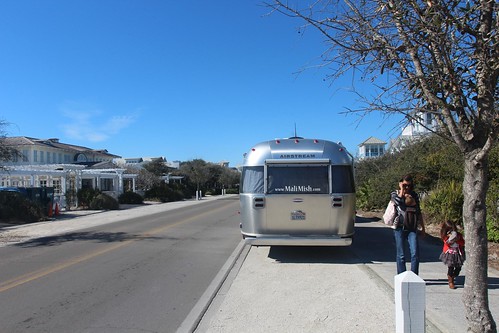 Seaside has a very quaint, small town feel as no buildings taller than 4 stories are allowed here. That means there are no big high rise resorts to ruin the atmosphere. We didn’t know what to expect with parking and it turned out to be pretty straight forward. We had to drive down a couple of blocks but we were able to pull off right alongside 30A in front of a condo complex. Unlike the rest of Florida, winter time here is the off season so it might not be as easy to do here in the Spring. 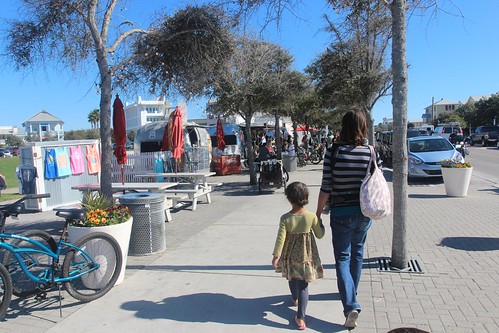 The primary reason for our visit is to check out their row of Airstream food trucks in the center of town. There are about 6 of them serving everything from BBQ to grilled cheese sandwiches. The first one to open for business is the shaved ice Airstream that was here all its lonesome for many years before the rest of them joined in. 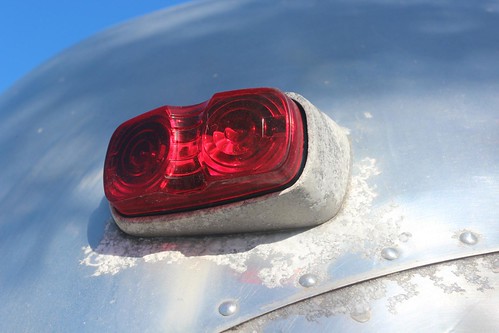 Being so close to the gulf year round, the salty air has done a number on these beauties. The corrosion on them is pretty bad in a handful of spots like the tail light of the International. 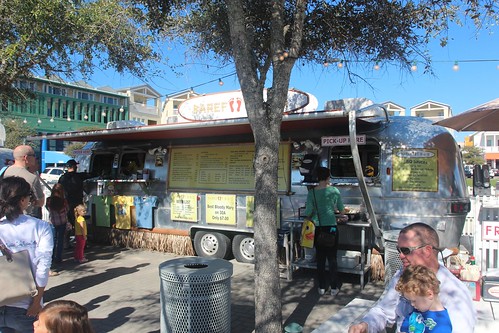 We decided to give Barefoot BBQ a try. They are housed in a vintage Airstream International with a separate Silver Streak Clipper that serves as its storage closet. The food was decent. It is your typical BBQ fare featuring pork, chicken, brisket and ribs. We have had much better BBQ at unknown restaurants but this is the first from an Airstream. Prices weren’t great for what you get. A two-meat combo with a couple of small sides costs $20. You order at one window and they call your name at the other one for you to pick up when its ready. What we didn’t expect is an automatic 10% gratuity that they added to our order. I cannot say I agree with that. It is a food truck. No one brings out my food and I have to bus my own table when done. If you are going to charge a mandatory 10% fee, just add it to the price and be done with it. Don’t call it a ‘gratuity’. 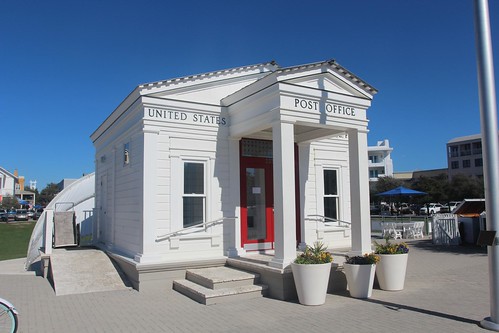 Right in the middle of the town center is Seaside’s own United States Post Office. It has a look as if the building was erected as an art installation. 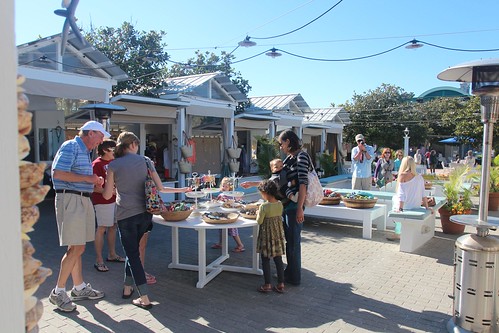 Right across the street from the Airstream food trucks is another area of restaurants and shops. Everything here is owned by moms and pops. Some of them are pretty well-to-do moms and pops and they are all here because they love the community of Seaside. 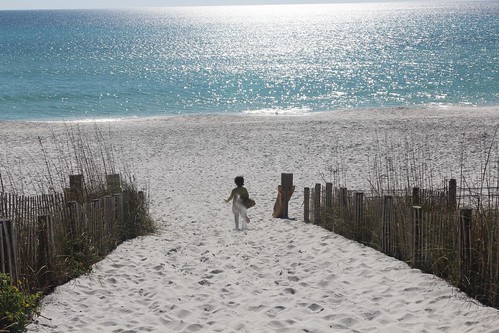 Just behind them are little paths that you can walk right down the the public beach that is accessible by everyone. The color of the water is a beautiful aquamarine so crystal clear that you almost feel safe to drink straight from it. No where else have we seen water like this in Florida. All of the oil spilled by BP’s Deepwater Horizon is no where in sight. 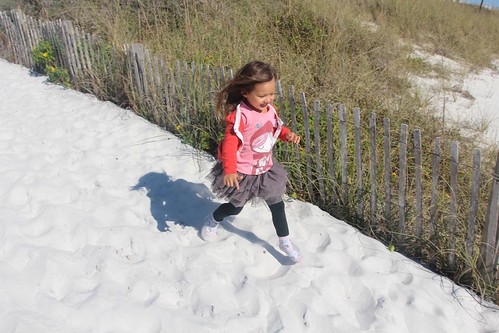 The girls loved running up and down the path that leads to the beach. 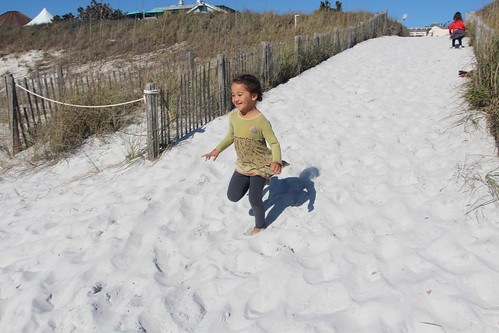 They probably did this for a half hour straight. Each time they come to the bottom, they tumble to a stop with their heads buried in the sand. 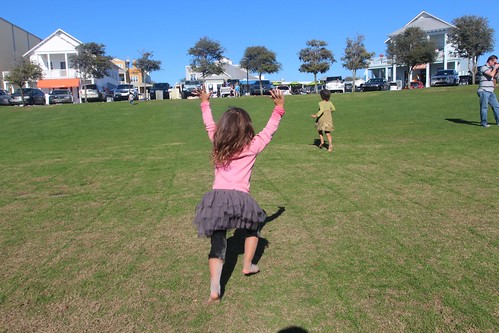 After some hanging out by the water, we returned back across the street to a big grassy field behind the Airstream food trucks. 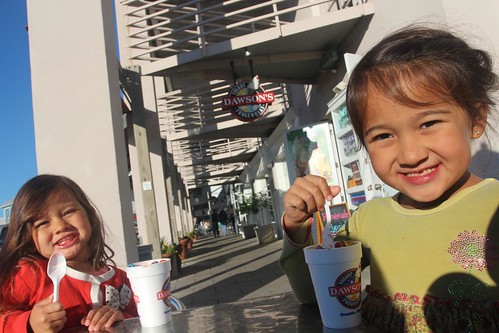 When we started to make our way across the panhandle, we had noticed that a couple of our fellow Airstream bloggers have been spending some time in the area. We have been friends with them on facebook so we reached out to see if they were still here. It turns out, they have been staying here at a beach-side condo sans Airstream for a few weeks and we decided to meet up. 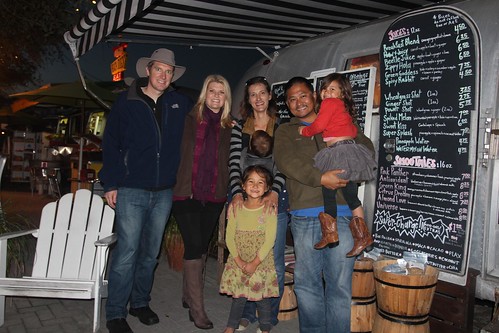 Most of you who are Airstream owners or aspiring owners have probably visited their blog and watched videos from Sean and Kristy Michael of LongLongHoneyMoon.com. This is the first time we have crossed paths and it was really cool to meet them finally in person. As always, we found that we instantly have tons in common with them. Being regulars at Seaside, they told us lots of great places to go to during our short stay here. 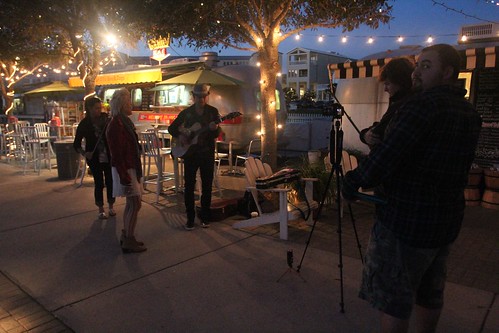 Just as we were headed back to the Mish, this trio of musicians broke out into a song right behind us. We are here during the tail end of the 30A Songwriters Festival with lots a talented musicians performing at venues all up and down the road. Apparently there are little cool and interesting events like this that happen several times a year and we were lucky to be in the middle of one. I can really see the appeal of this place after just a few short hours. We could easily stay a month or longer at Seaside without getting bored. 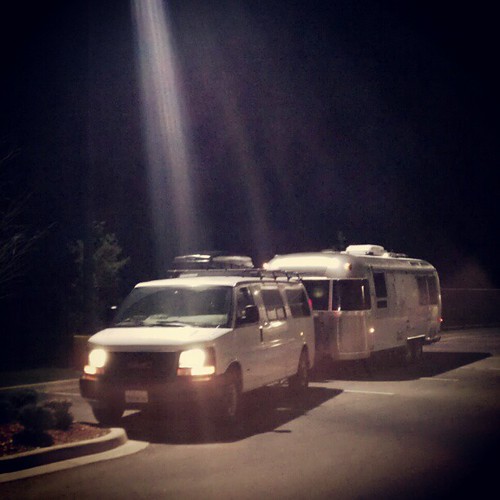 As we parted ways with Sean and Kristy, we decided that we will try to meet up again before we left Seaside if they are still in town. Since the campground we wanted to stay at was already closed, we headed over to the closest Walmart for a night of boondocking. As Walmart is relatively new, it doesn’t yet show up in our boondocking mobile app. Since several other RVs were already there, we felt comfortable enough to set up shop.

It turns out, we all got knocks on our doors at around 11pm. Even though there are no signs that discourage overnight parking, the assistant manager did not care and went out of his way to kick us out. We have parked in many Walmarts and have even parked in ones that have no parking signs. When asked for permission, the store managers have always been accommodating. They usually tell us to just park somewhere discreet in case the police or sheriff drives by, we wouldn’t be seen. This is the first time we have ever gotten a knock on the door by a store personnel asking us to leave.

Thanks to the Cracker Barrel a few miles down the street, we found a safe and comfortable place for the night. I just wish I hadn’t already spend $75 already at that Walmart.

Was it hard to see Airstreams as Food Trucks? Sometimes I feel a bit sad because they have fallen to such disrepair, or decay. I saw one with the trailer hitch cut right off.
Anna-Marie, Platinum Airship