Last night was the coldest night we have had in a long time. It is definitely not shorts and t-shirt weather around here anymore as it dipped into the 30s for the first time for us since the Carolinas back in October. Hopefully this is just a cold spell that will pass as we intend on keeping our summer clothes around for as long as we can. 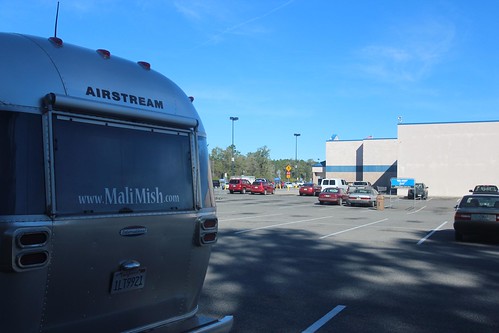 There really isn’t a whole lot to do here in Crawfordville so we headed out quickly down the road towards Apalachicola. We had only briefly stopped here for a meal after dark during our last trip and had an amazing meal at the seafood grill in town. 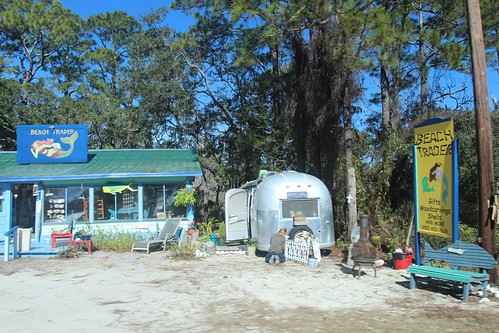 On the way towards Apalachicola, we came across a handful of Airstreams driving in the opposite direction. We even saw a cool vintage one at a waterfront gift shop called the Beach Trader. 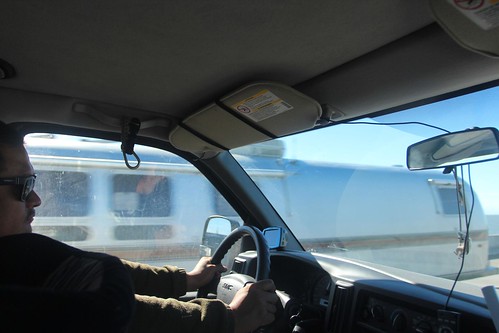 There must be some WBCCI events going on behind us as we are clearly going to wrong way for an Aristream. 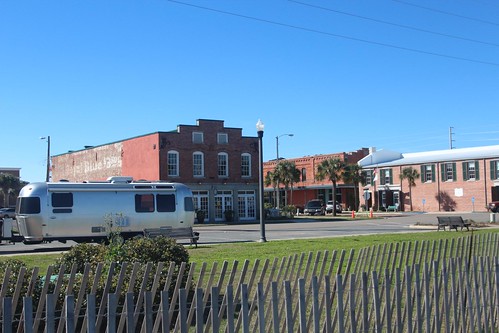 We parked at the same spot we did last time right along the water at Apalachicola. This place is exactly as I remembered except it is even more beautiful in the day time. 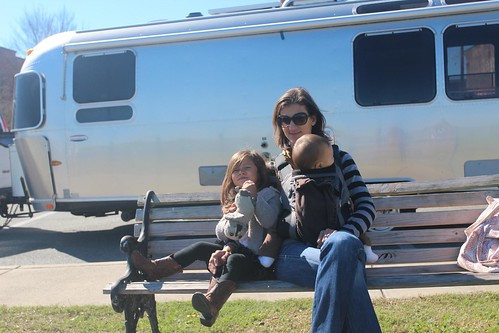 The weather has warmed up from last night and it is beautiful here. The gusty conditions from yesterday have completely gone away and what is left is sunny and clear skies with temperature in the high 60s. 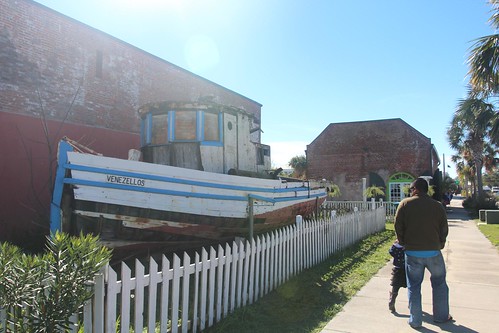 The Venezellos is still here just as it was last time. I wonder why no one has taken her out to sea? 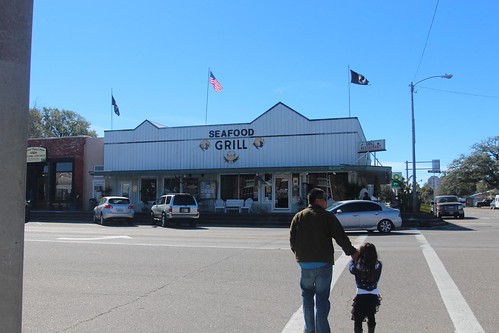 This is the Apalachicola Seafood Grill. Last time we were here, Ava was cornered by a giant beetle on the floor of the restaurant after eating their delicious fish and chips. But we don’t hold that against them. 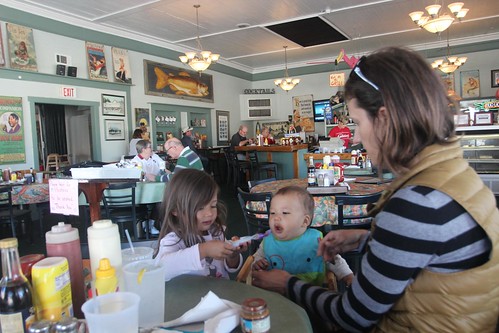 Apalachico is responsible for supplying 80% of the country’s oysters. When we ate here last time in the dark, we had no idea where we were and what to expect. We foolishly got burgers instead of seafood since it was a safer bet. 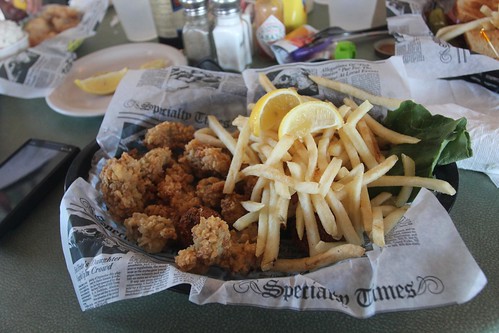 This time, I opted for the fried oyster basket. It was delicious. I suspect a lot more oysters are in my future before we leave the panhandle. 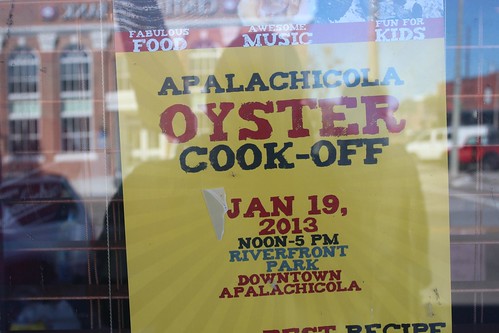 This weekend, Apalachicola is having their annual oyster cook-off at the Riverfront Park. Too bad we will be in St Joseph Peninsula 30 miles away. 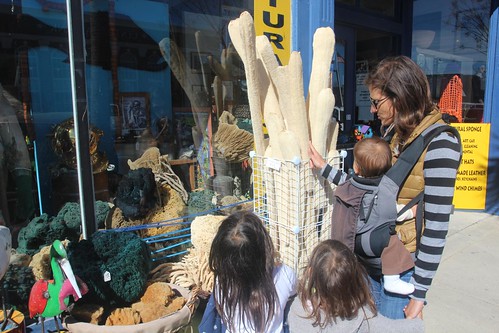 Apalachicola also was home to one of the first sponge exchanges in the country. In fact, it was relocated to Cedar Key for awhile before returning here a couple of decades later. 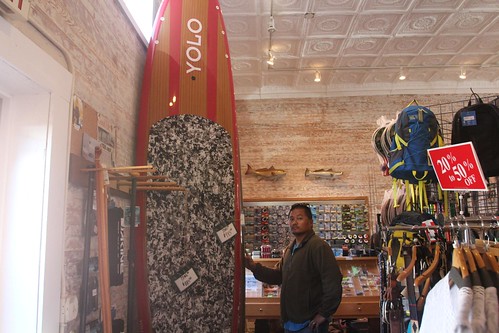 This store was having a sale on YOLO SUP boards. I am guessing it is a little late to buy one. It would have been fun to have in the keys. 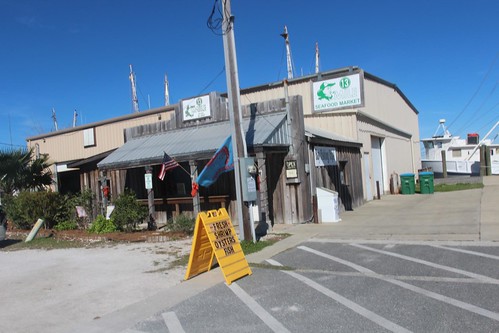 Before we headed out, we bought some locally caught grouper and shrimp for our next couple of days in relative isolation in St Joseph Peninsula. 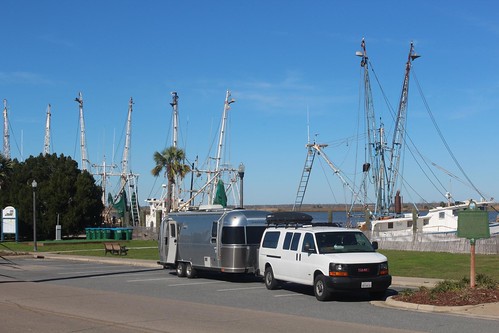 We spent a bit more time here in Apalachicola than we did last time around but this place definitely deserves a much longer stay. I hope we will be back again soon. 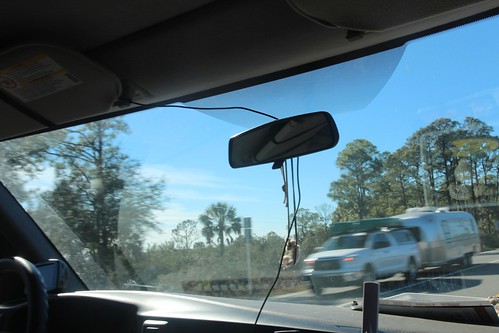 Guess what, more Airstreams going the other direction. Let’s hope this is good sign for campground availabilities ahead of us. 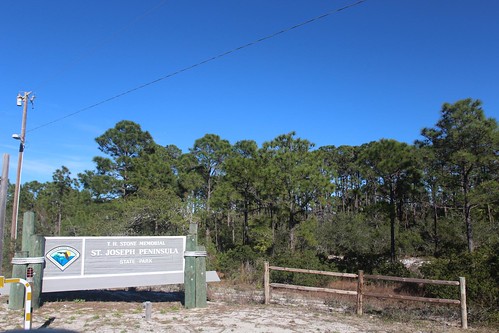 We finally arrived at St Joseph Peninsula State Park about an hour out of Apalachicola. It is a 2 lane road that dead ends at the park with a good portion of the road having water views on both sides. 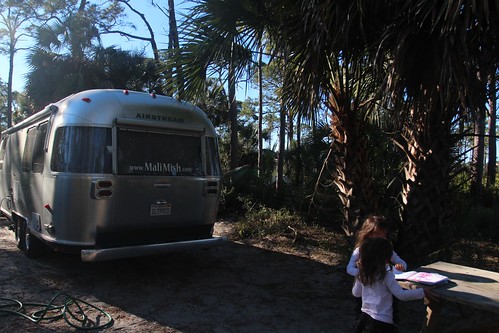 The park has 2 camping loops. One of them is called Gulf Breeze that is less shady and just a couple of minutes by foot closer to the beach. 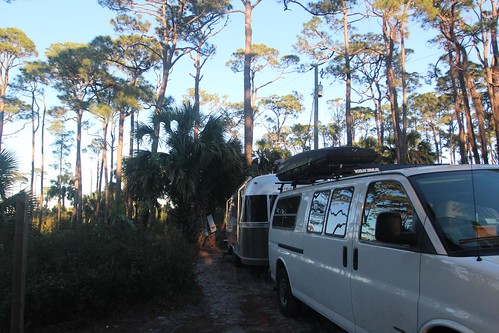 We opted for the Shady Pines loop as it was less crowded with more secluded and private sites. 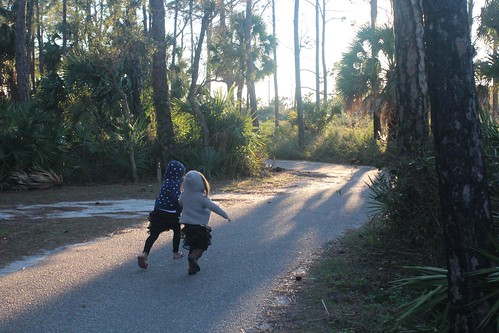 The difference in the distance to walk to the beach from both campground loops are actually pretty negligible. We were able to walk from our site to the beach in around a couple of minutes. 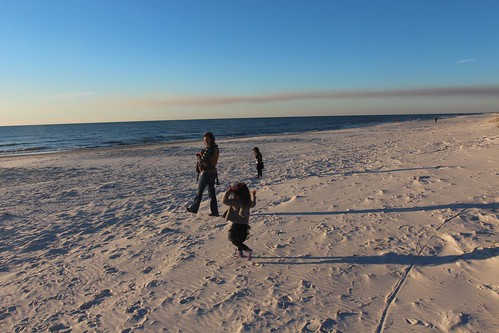 The long stretches of beaches here are pretty breathtaking. It seems to go on forever in both directions. On the gulf side of the peninsula, the beach faces directly west and you cannot see any land on the other side. As the sunsets, it feels like we are back on the west coast again. 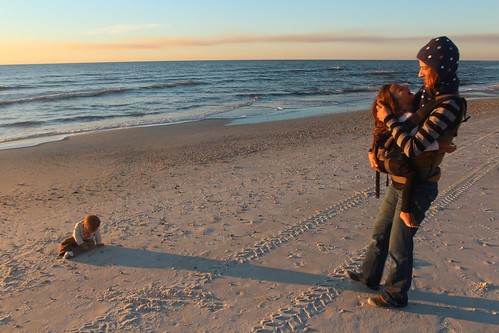 Just on the other side of the gulf hidden by the curvature of the earth is the state of Louisiana. We will finally leave Florida in a week and will be making our way there shortly after.

Speaking of oysters, while you guys are in New Orleans or if you need a bite to eat while going through Baton Rouge, stop at ACME Oyster House and get the charbroiled oysters! DELICIOUS!