We spent our second night in a row boondocking in a parking lot. This time at a Walmart in Jacksonville, Florida. We intended to find a truck stop, preferably a Flying J, but they are harder to come by when you are near a big city. And a big city Jacksonville is. In fact it is the largest city in the continental United States in terms of the geographical coverage at over 874 square-miles. 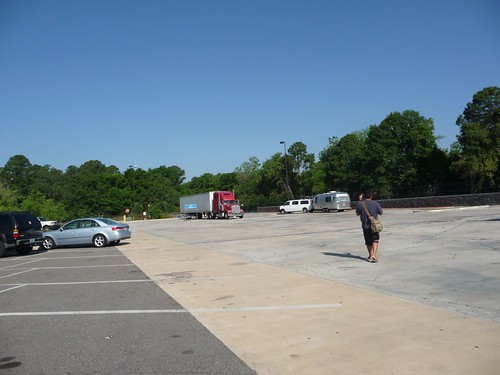 We had been hoping to line up a visit with Marlene’s cousin who is stationed at the naval base here but we have been trying to contact him to no avail. Sounded like from the last time we talked that he was preparing to ship out to the middle east so is likely quite busy. We didn’t know whether or not to wait for him to get back to us or just move on to the next city so we found a good happy medium for the day. Head over to Little Talbot Island State Park and have a beach day while we figure things out. 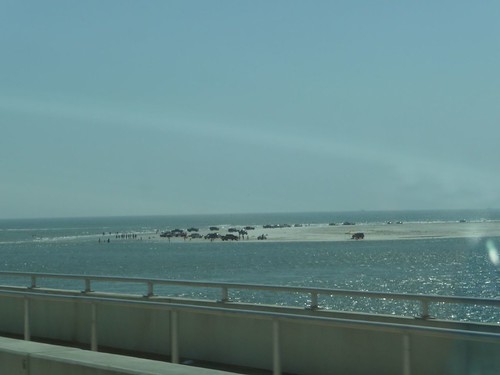 The drive out to Little Talbot is scenic and beautiful and it was a nice change of pace to be driving again on little county roads instead of the big interstates we have been using in the last few weeks. 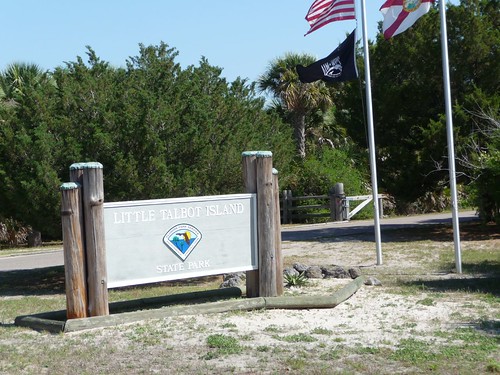 Little Talbot is part of a cluster of Florid State Parks in the northern-most portion of the Atlantic coast. Along with Big Talbot Island, Amelia Island, Fort George and a few others, it is the only one in the bunch that has overnight facilities. It is technically an island, but like many islands in this part of the coast, it is not separated by a channel in the oceans but rather the Atlantic intracoastal water ways.

When we got here, we inquired about getting a site for maybe a day or two. The rangers informed us that as of the morning there are no sites available yet because people have not checked out. There were however not full for the evening so we could check back after 1pm. They let us park at the day use beach area without having to pay the entry fee as we waited so that turned out pretty nice for us.

Parking at a parking lot by the beach is probably one of the best things we do on transit days like this. Unlike a store parking lot, we can open up all the windows and loiter inside the trailer without people looking at us funny. In fact, most of the beachcombers are probably envious of us having all of our facilities right at the beach. Last time we did this was just outside of Tampa at the county park called Fort De Soto County Park.

Do you think Ava’s photography skills are getting better? None of us had to duck to get in the frame of the picture this time. 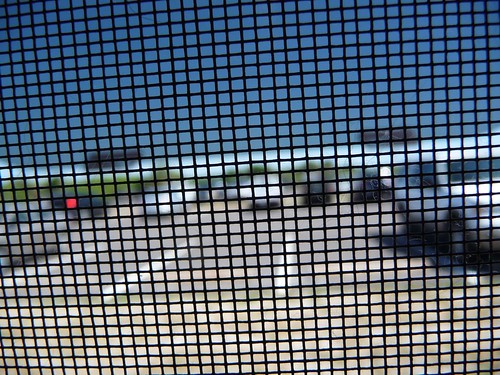 Look at this artsy photo she took of the parking lot. She is a natural. 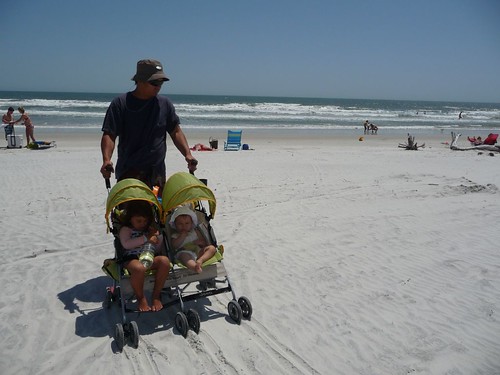 We finally bought a double stroller yesterday after we left St. Augustine. Mila is getting too big and also it is too hot for Marlene to carry her so tightly against her chest in the baby carrier. That means we are now lugging around 3 strollers in the back of the van and sooner or later we will need to do some serious spring cleaning or we will be busting out of our seams.

We decided after awhile at the beach that our best bet is probably to keep heading north rather than to wait for a site to open up here. We are not really interested in seeing Jacksonville so into the car we went after we savored our last few moments in the warm waters of the Florida Atlantic coast. Thanks for the free beach day Little Talbot Island State Park! 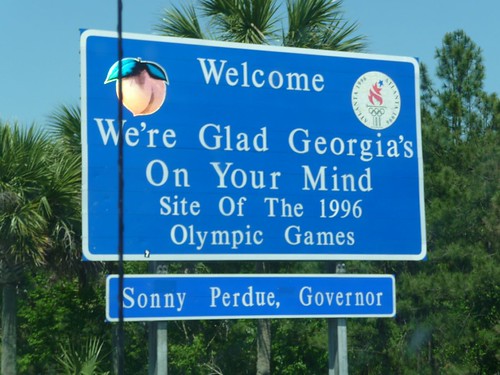 Our next destination: The great state of Georgia.

Marlene has been looking forward to Georgia for a long time. Even at the beginning of our trip, Savannah Georgia was on the short list of cities we wanted to see.

It has been great to have spent the last couple months exploring the state or Florida. Since we travel mostly without an itinerary, we asked a few friends on some ball park ideas about how long we should stay in Florida. We didn’t really know it at the time but the best answer we got was from Rich Luhr or Airstream Life Magazine. He said, “The weather will tell you.”

He was right. The humidity and temperature in the last week or so got a little unbearable for us pampered Californians. It told us not so subtly that it was time to move on.

Not knowing much about Savannah, Georgia except what we’ve seen on TV and in the movies, we didn’t know exactly where to go. During the few hours we spent driving to Savannah, we did some research online and found that many travelers are quite fond of the campground at Skidaway Island State Park. So that’s where we headed. 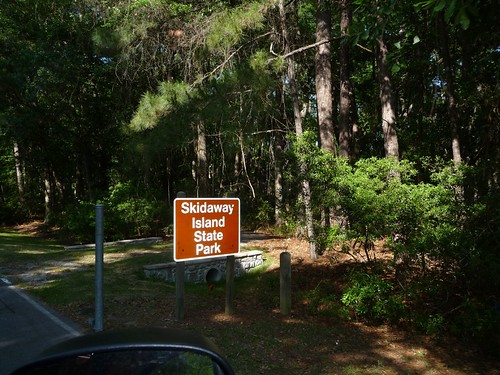 State parks in Georgia don’t quite take the extravagant approach that Florida parks do with their street signs. This right here is the main entrance. No thrills, no frills. 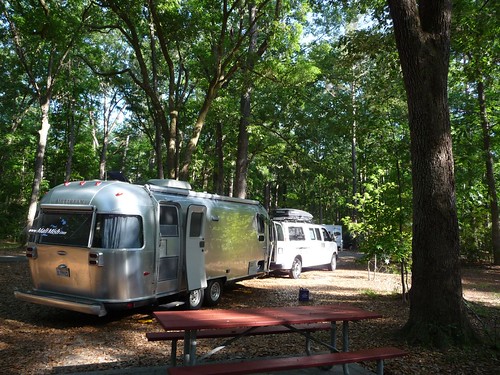 Inside the campground however is a completely different story. The sites are all huge pull thrus with tons of space between each one. The campground was developed in the forest possessing huge canopies all over everything with rays of light glimmering through the branches and leaves on to the ground all around us. Even though the sites are not paved, it wasn’t hard for me to find a level patch of dirt to set up camp.

Skidaway Island is also one of those islands formed by the Atlantic intracoastals. It is actually not in Savannah proper but is only about a 15 minute drive into town. A couple things you have to be aware of is that the paved roads within the campground are only wide enough for a single vehicle to drive on. There is usually enough dirt to the either side so as long as someone is willing to budge when they come head to head, it is not that big of a deal. The other thing to note is that the sites are not individually assigned. You pay for the number of nights you want to stay at the gate and as long as there is vacancy, you are able to come in to find a spot for yourself. Think of it as like the Southwest Airline’s seating assignment process but at a campground. 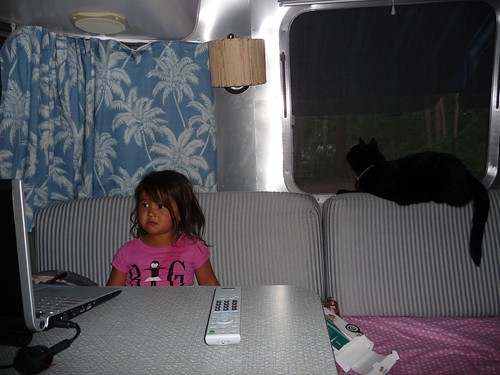 After a long drive to get here. The girls are all pretty worn out.

Ok, ok, let’s go to sleep. We can leave the sightseeing for another day.