Our 10 days in California came and went. We got a chance to borrow a car to go home for a day and Ava got a chance to have several play dates with her friends and cousins. Having been gone for nearly 2 months, we didn’t know what to expect. The answer is… Nothing. Everything is still exactly the same as they were two months ago. 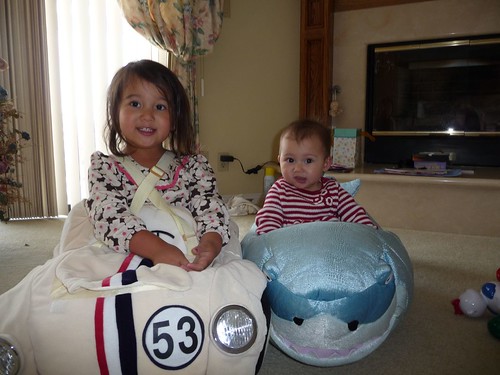 Actually, nothing is exactly what we could have wished for. We had no major issues at the house, no major surprises with family and friends and the world kept on turning just as it did before we left. All we knew is that we wanted to get back to Yoda and Mali Mish as quickly as we can. Ava thought Herbie the Love Bug by land and Mila thought great white shark by sea. Mama and dada thought, we paid a lot for those plane tickets and we are gonna get our money’s worth. Damn it! 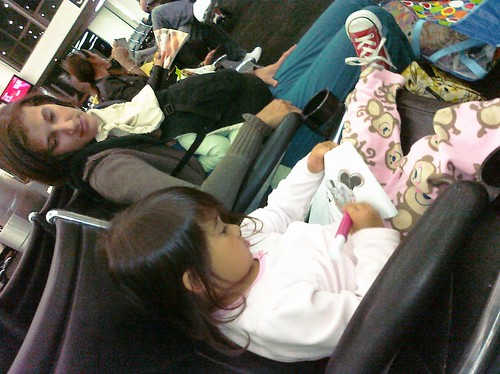 Our flight back to Fort Lauderdale was a red eye that left LAX at 10:30PM. Air travel with kids at this time of night is a major gamble. Luckily for us, they slept most of the way back and didn’t give us too much of a fuss when we had to wake them up as we touched down in Fort Lauderdale at 6:00AM local time. 3:00AM Pacific time. Ouch. 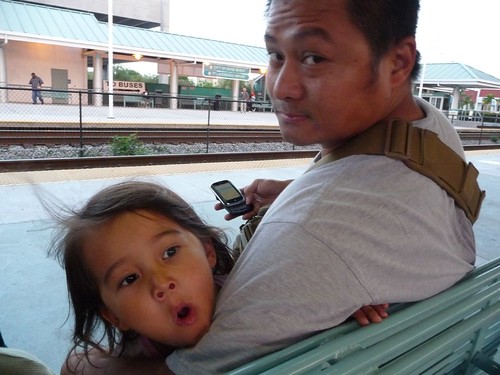 From the doorsteps of Marlene’s parents house where we stayed for 10 days back to Mali Mish, we took exactly 5 different vehicles carrying 2 car seats, 4 carry-on bags, an infant and a toddler. Here Ava and I are waiting for the TriRail at the Fort Lauderdale Airport station. Can you tell we are a little tired?

As we got to the station, the north bound train was just getting there. We could have gotten on that train except apparently half of the world has no idea how to follow instructions on how to use an automated ticketing machine. Some guy even asked me how he could get a discount because he belongs to some organization. Explain that to the machine buddy. I guess the next train will have to do. 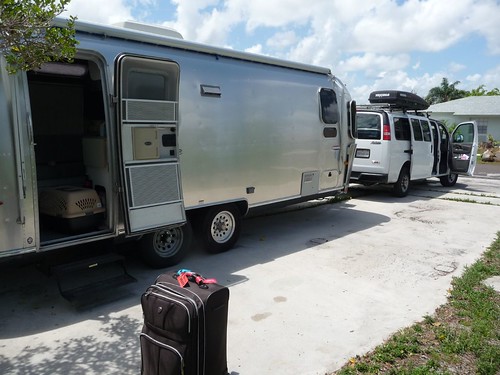 Thanks to Paul who was waiting for us at the Boca Raton train station as we arrived, we got back to his house in no time flat from the train station. Yoda was excited to see us and Florida is just as humid and vacationy as we remembered. We were glad to be back.

But first things first, I need a nap. That’s right Mila, naps are for big kids too.

I had a 100 mile drive in front of me so Marlene was kind enough to let me catch some much needed Zs before we hitched up and headed out. We have had reservations at John Pennekamp Coral Reef Park in Key Largo since before we left Louisiana and we are not going to miss it.

A 2-hour nap later, we were back on the road and heading south. This stretch of the road is actually a little bit of a back track for us. We did however avoid the Florida Turnpike as much as we could to avoid paying the tolls but at one point, we had no choice. To get down to the keys, we had to shell out for 2 more tolls. 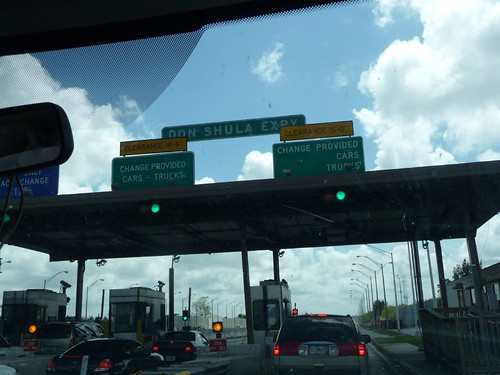 We had heard some nightmares about the traffic going down to the keys and we crossed our fingers and hoped for the best. We made sure we got on the road early enough to not hit traffic in Miami during the peak hours and made sure to not travel on either a Friday or a Sunday. That was a good plan. We made it past Miami and towards Key Largo with minimal stoppage. 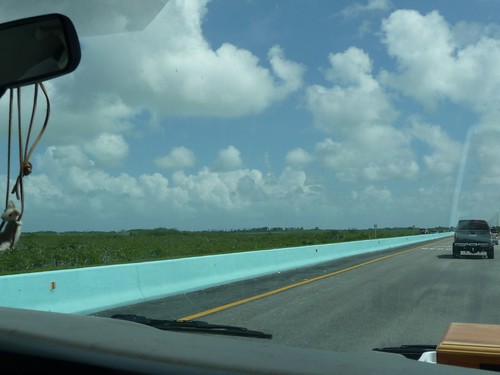 We knew we were getting close to the keys when we saw these lane dividers turn from the dreary gray concrete color to this aquamarine blue. 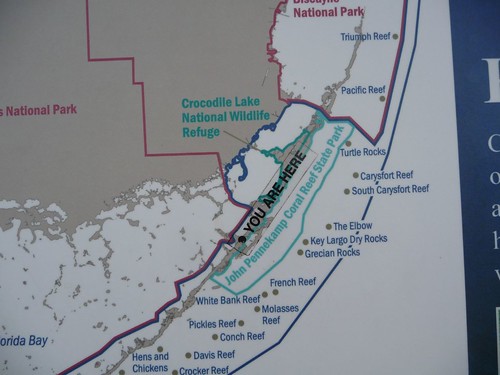 Key Largo is the first island you get to as you take the Overseas Highway from Miami-Dade county. The entire island at one point was an underwater coral reef when the sea levels were much higher (think millions of years ago, not hundreds). The island now is essentially the fossilized version of its past but the there is still a living coral reef just offshore from it that is supposedly the only in the United States. 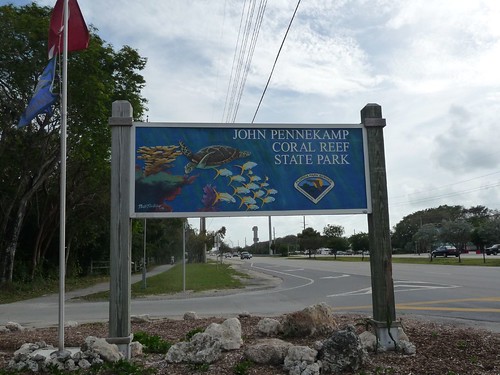 Still exhausted, we finally made it to John Pennekamp. It is really hard to get reservations here if you don’t book them ahead of time. As I was checking into our site at the campground office, a number of people were turned away looking for walk-in spots. If you are up for a challenge, go for it, otherwise, I suggest you plan your stay here well in advance. 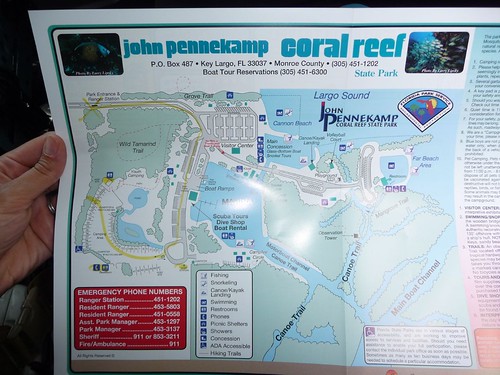 There are only about 50 RV sites here and not all of them are taken up by RV campers. Several of them are occupied with just tents. Being that the weather here is tropical, tent camping is probably quite comfortable in the evening. I wouldn’t know for sure, I am sleeping in that big aluminum thing. 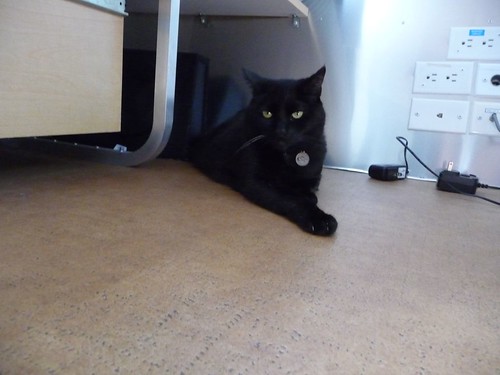 As the weather got a little warmer, Yoda also found some new spots to chill out. She use to spend her days mostly on our bed shedding on our comforter. Today, she is lounging under the dinette table on the cool surface of the floor. 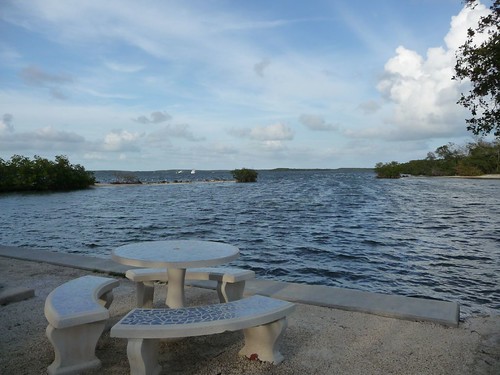 We have been checking the weather daily before heading back to Florida. We were hoping our days in the keys would be nice and sunny but the reports had been calling for a lot of rain. When we got here however, it was not the rain that is the problem, it is the wind. The campsites are pretty well protected from the wind but when you walk out towards the water, you clearly noticed just how windy it is. Some of those clouds might be carrying some rain but at the speed they are moving by the wind, it does not stay overhead for very long. 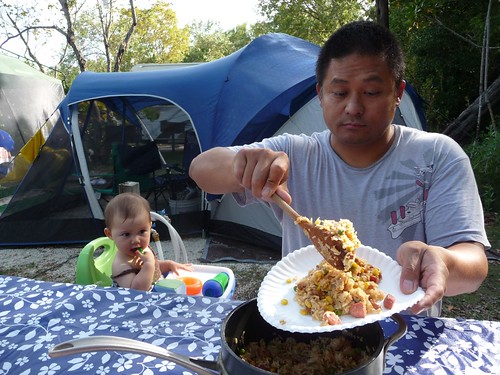 We headed back to camp vowing to make tomorrow a day to remember as our first full day in the Florida Keys. However for now, we are eating whatever this thing is that I made. Give me a break, I am tired.

i’m glad they got comfortable in those costumes! i knew it would happen. 🙂