The federal lands-to-parks program is credited for turning the former orchard to the county park we are currently staying at. The same program also segmented another portion of the same land just behind us to what is now the Miami Metro Zoo. That is where we went today. 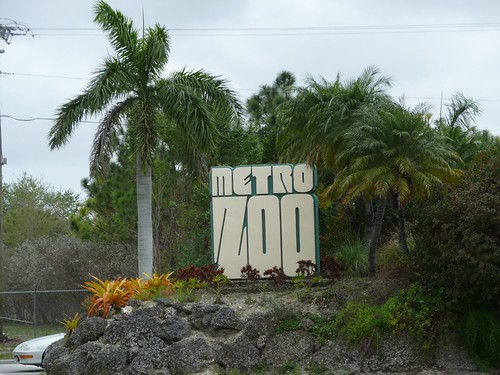 We knew that the zoo was close but we had no idea it was that close. We were literally separated by a chain link fence. We were so close to the animals, if one of the tigers got loose, we would probably get eaten as we were one of the few tender young meat at the campground. To get to the regular entrance however, we had to drive around the block to the other side. 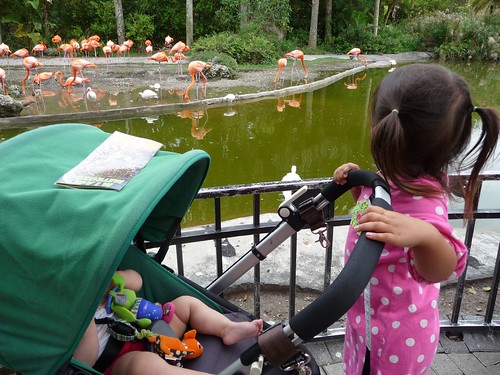 Ava got to use her big-sister-step we have attached to the bugaboo stroller. She loves riding on that thing since she gets to make faces at Mila and also it gives her a little boost to see the flamingos better. That’s right, these are real flamingos, not the ones Airstreamers stick in the ground at the campsite. 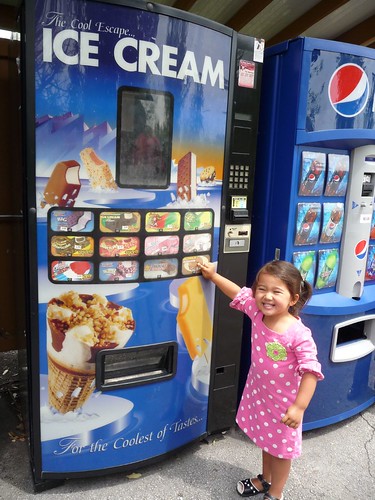 At the Miami zoo, not only do they have soda vending machines, they also have these ice cream vending machines. And looky what we have here, “Hamburger Ice Cream”!!!!! Ava’s new favorite thing in the world. 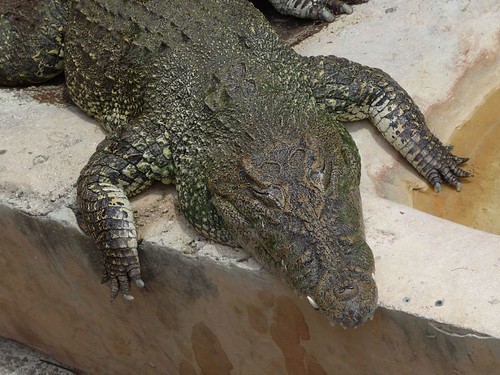 Of course since we are in Florida, we had to go check out the gators and crocs. I couldn’t really tell you which kind this is, but he sure is well fed. This guy is a fatty!

The Miami zoo is divided up into sections that represent areas of the world. Places like Asia, Australia and the Amazon are all represented here among other places. Being that is is very tropical here, they are able to have animals that we never get to see in the zoos back in California. 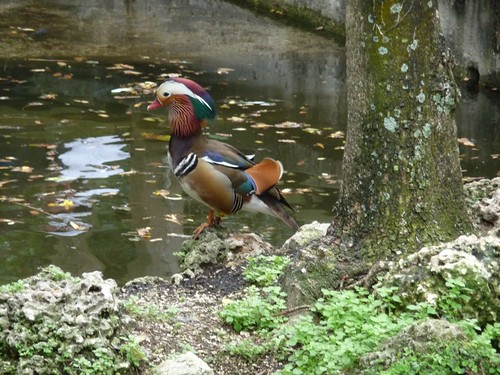 There is a entire aviary dedicated to birds from Asia. I am not really much of a bird watcher but I know this colorful avian creature you will not see out in the wild here in America.

In the background here we have some Asian Elephants. Ava was so excited to see that elephants like to kick a ball around just like her.

And what is that mask she is holding in front of her you ask? Well of course it is Diego’s friend Baby Jaguar! I don’t actually remember if they even have jaguars here but they were giving these masks out for a reason. What reason is that you ask? 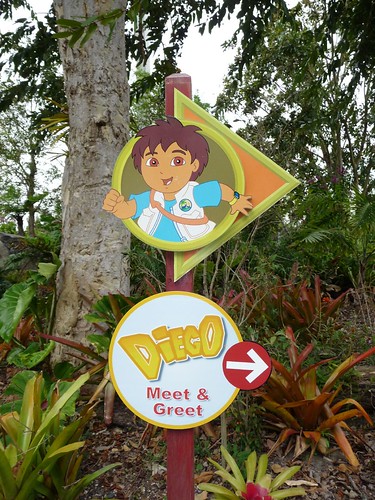 Because Diego is actually here at the zoo today! When we started cruising around the zoo, we had no idea where everything was. When we finally got around to looking at the map, we realized the Diego meet-and-greet was clear on the other side of the place. And we only had 15 minutes to get there. 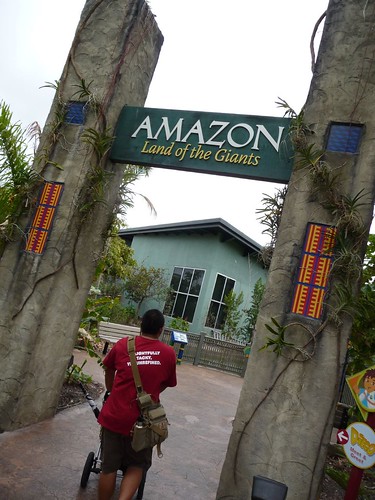 Whether or not it was wise, we decided to pass up continents worth of nearly endangered species to get across the zoo so we can take pictures with some dude (or girl) dressed in the big felt head. 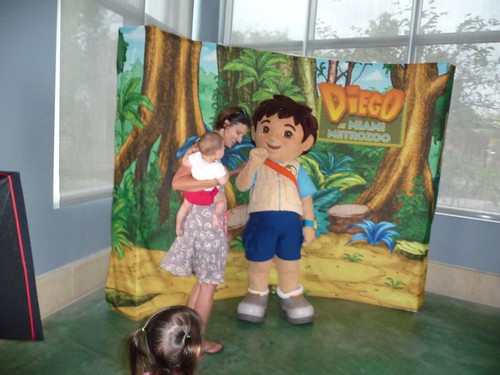 And wouldn’t you know it, we made it in time for the meet-and-greet. Here is Mila meeting Diego for the first time and Ava suspiciously approaching this supposed ‘teenage animal rescuer’ with ridiculously large feet.

Well, you gotta suspend disbelief. Here is Ava squeaking out a smile with Dora’s cousin. 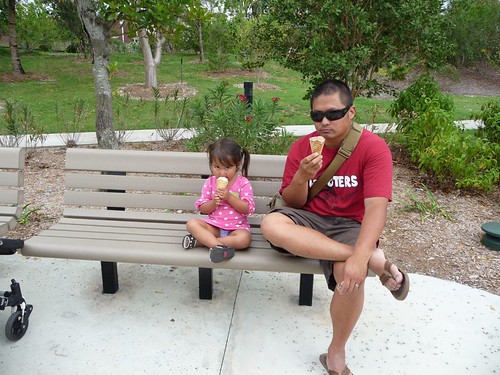 After all the hustling across worlds of animals, we were a bit tuckered out. For that, we treated ourselves to some delicious soft serve ice cream in waffle cones. Don’t let the size of the cones in our hands fool you, these suckers were huge. We have probably eaten well over half of the cones at the point when this picture was taken. And since it is soft serve, it is not like there were just a scoop of it sitting atop all this empty space inside the cone. These suckers were filled with it.

We have lately been in a bit of an ice cream binge. Pretty much every day we are stopping for some kind of ice cream product or another. Sure it’s gonna make us fat, but hey! We are on a vacation! We are suppose to overindulge right? 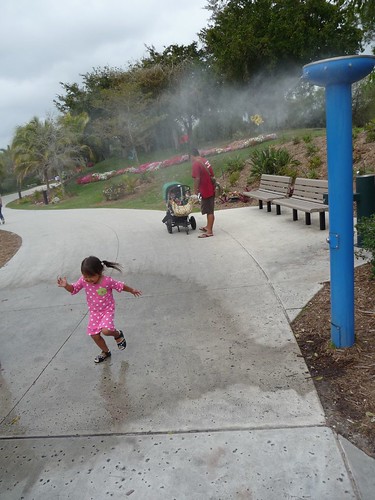 OK, Ava, now go run around to burn all that sugar out of your system! 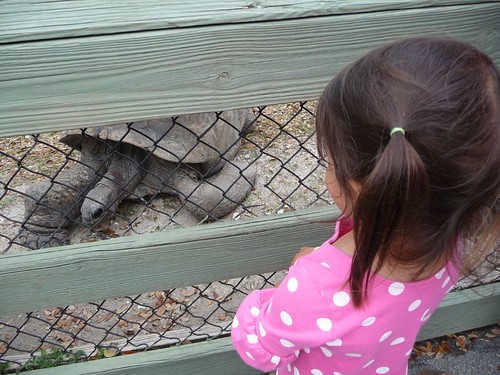 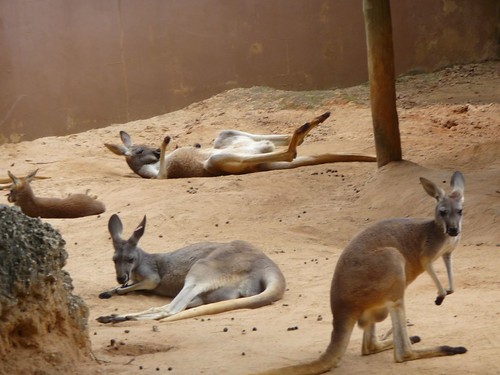 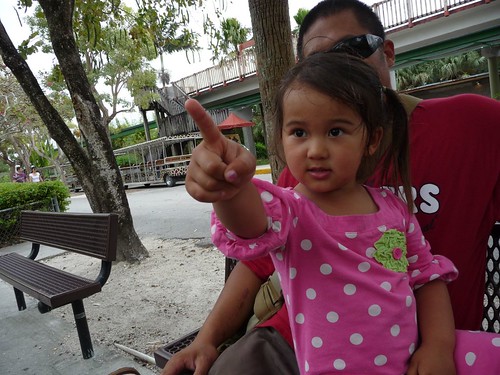 “How about these guys?” 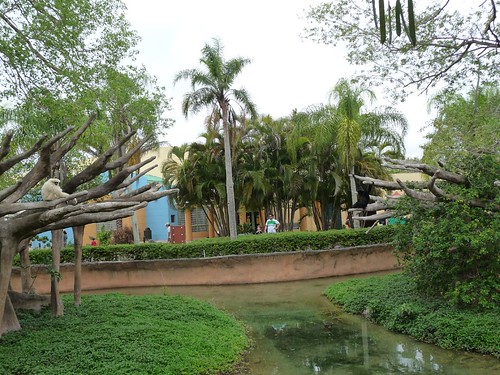 Did you think I was gonna say monkeys? Of course not! Because if I did, someone will surely correct me and tell me that gibbons are actually not monkeys but rather apes. 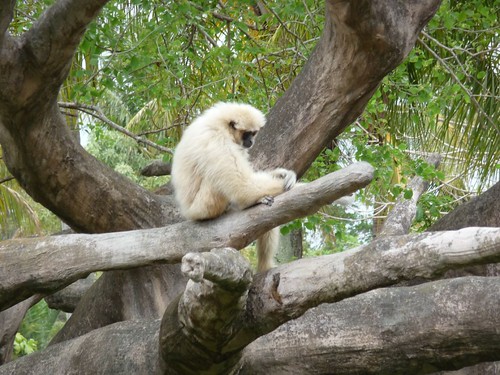 Well, this guy wasn’t in much of a swinging mood. All he wanted to do was look at his foot.

One of the current attractions at the Miami Metro Zoo is a larger-than-life insectarium. We had no idea what to expect as we didn’t know how they could get insects to grow larger just for the purposes of a display. In fact, we were rather disgusted by the idea of giant bugs. In reality, inside the building they just had animatronic beetles, a praying mantis and some giant bee and mosquito heads on display. It was kind of cool to see them blown up to those proportions but Ava was not a big fan. I took her through the display and she clung on to me like fly on you-know-what. 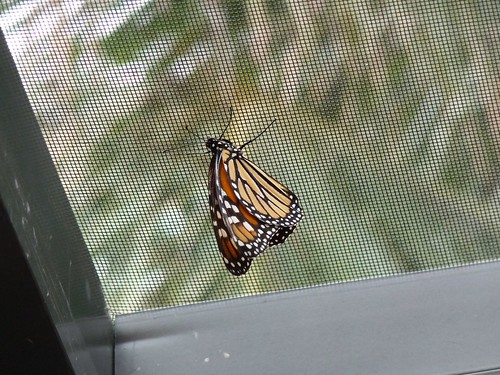 A life-size butterfly is probably more her cup of tea. 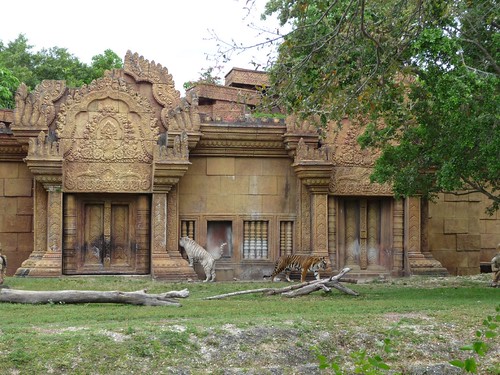 On the way out of the zoo, we passed by the tigers exhibit. These bad boys by now were getting a little restless and probably hungry since they were pacing back and forth and occasionally looking inside to probably where their dinner is served.

Watching them pacing around got us hungry for some steak of our own. Ever since we ate at Steak ‘N Shake in Bradenton near Tampa, we have been craving to have a second crack at their delicious steakburgers just to make sure it is as good as we remembered.  It is no In-N-Out but our second visit indeed ensured that they churn out some tasty burgers. 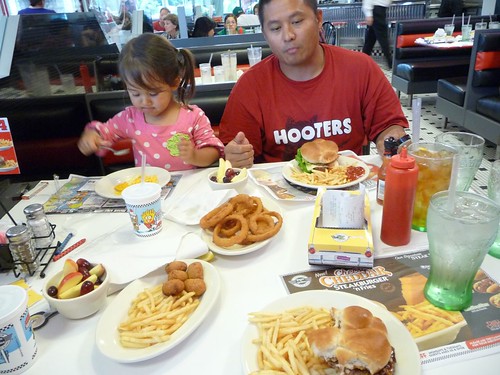 Not to mention yet again, ice cream shakes for all.

[…] is our second zoo so far on our road trip. Our first one was the Miami Metro Zoo where we ran around like chickens with our heads chopped off in order to meet Diego. This one was […]