We drove to Fort Myers last night to a Walmart and once again were surprised by a no overnight parking sign at our preferred location. Fortunately the second option was ok and we stayed there next to a couple of other RVs for the night. 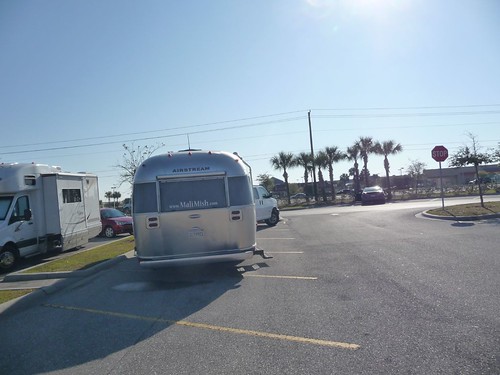 Being a Friday night, boondocking is pretty much the only option we have since most campgrounds are full. Even Florida State Park walk-in spaces are likely filled so we don’t even bother trying.

One of the main reasons why we are here is because a friend of ours, Paul, who was our roommate from over 10 years ago is going to meet up at the beach on Sanibel Island where he and his family were going to visit for the day.

Paul shared three different houses with Marlene and me when we rented in Santa Barbara in the late 90s and early 2000s. His dog Nanook and our dog Rudy became best buds and caused much mayhem together at all three places we lived. Both of them have since passed on but their memories are constantly with us. In fact, Rudy’s passing for us was an epiphany that there is a world out there and we needed to be a part of it. 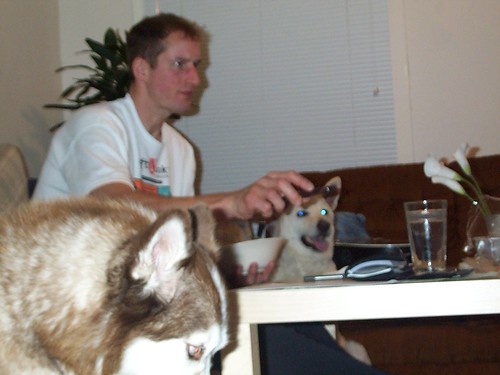 Here is a rare photo of Paul with the girls. He did not like to be photographed and that is why this blurry picture of him with half of Rudy’s face off frame is the best I can come up with. 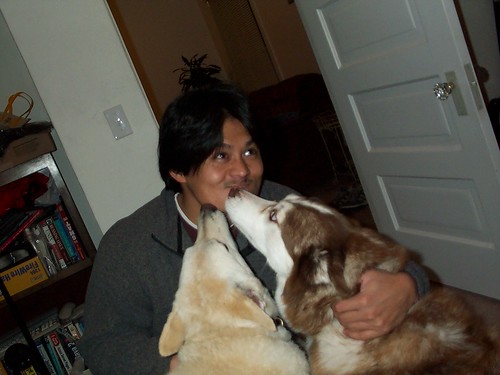 This is me from back in the day with them. And no, that is not a wig on my head, it is my real hair. The day after our wedding I shaved my head and have kept it short ever since. 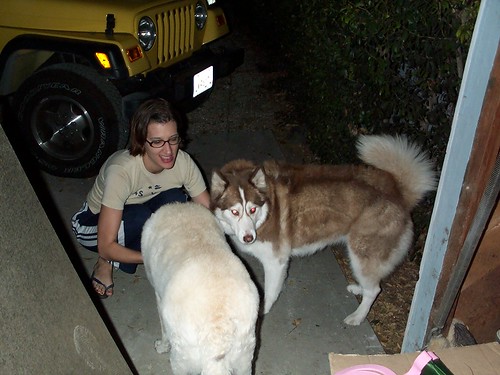 Here is Marlene about 10 years ago and with 2 different girls than you would normally catch her with nowadays. That is my beloved yellow Jeep in the background that I had to sell to make room for a bigger car to accommodate the arrival of Ava. 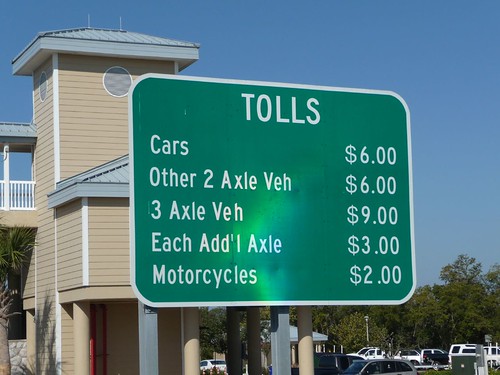 Driving to Sanibel Island from Fort Myers takes you on a small toll bridge that costs $6 per car. Since we were towing a double-axle trailer, we had to tag on another $3 per axle which made our toll fee a whopping $12. Ouch. We thought this place had better be worth it. 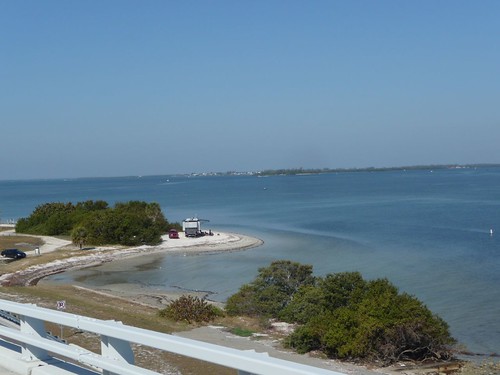 Driving across the $12 causeway towards Sanibel Island, we felt like we were getting a little preview of what the keys were going to be like. There are people parked along the beach right against the causeway including this massive class A RV that probably found the best spot there. 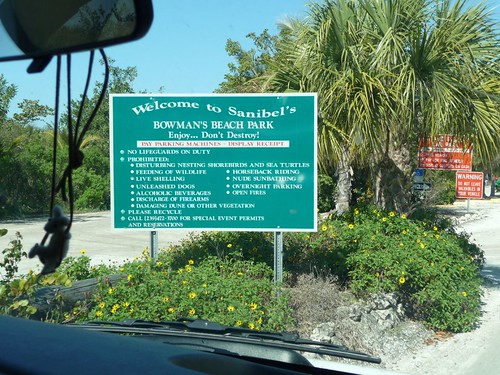 Once we got on the island, we took the narrow two-lane road all the way up the the north side of the island as we arrived at Bowman’s Beach. 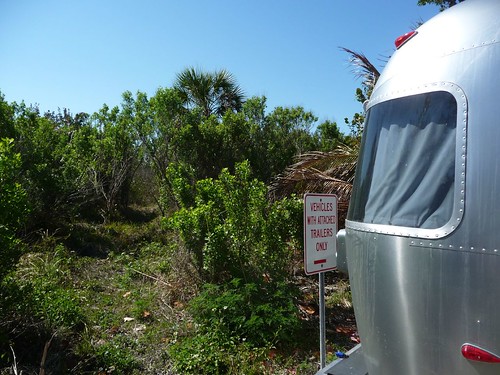 We had read online that Bowman’s was one of the places where over-sized parking was allowed. When we got there, we found that there is only one spot for travel trailers. Lucky for us, we were there early. Once again, it wasn’t cheap. We had to shell out eight bucks for a few hours of frolicking on the beach. At this point, we were committed.

As we walked towards the beach, we came across this no nude sunbathing sign. I might look disappointed in this photo, but I will soon learn that it is a blessing in disguise.

Mila is now sitting up pretty much by herself now and she spends most of her time in our beach tent as to protect her silky smooth baby skin.

Paul and his wife Natalie have a 1-year old son Ethan who Ava met for the first time here at Sanibel. She is still taking every opportunity she can in playing with every kid we come across. Even though Ethan is a little young to really play with her, she had a great time.

She is definitely enjoying the ocean a lot more each day. Here she is showing Ethan some of her fancy foot work.

I think this sums up pretty well what Ava feels about the beaches in Florida. 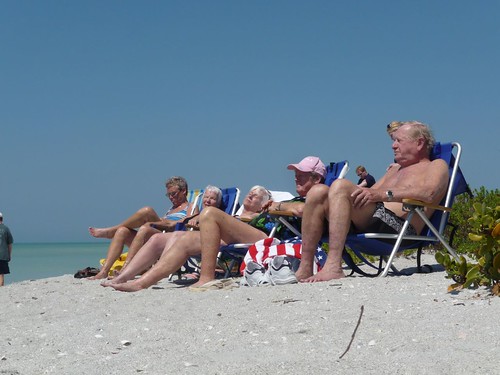 Or maybe she is just putting on a show for the little audience that has gathered near them. 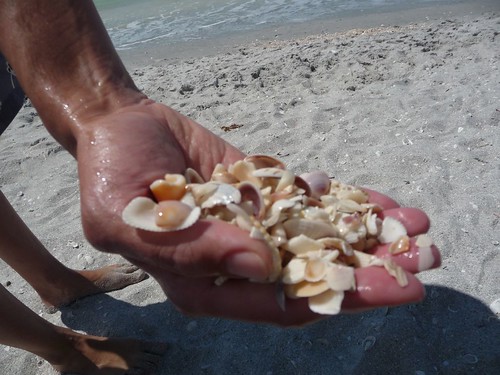 Along this part of the Florida seashore, sea shells are abundant. It is to the point of nearly overwhelming. Just a walk along the shoreline, you can reach into the water and come up with a handful just like this without even trying. Sanibel island is one of the better places for people to go ‘shelling’. The best time to do that is actually at the crack of dawn before anyone else has gotten there so all of the good ones that have washed up throughout the night are right there on the beach.

When Ava was Mila’s age now, we took at trip to Catalina Island and she touched the Pacific ocean for the first time. Here is Mila making her marine debut at the Atlantic with pretty much the same reaction as her sister had. 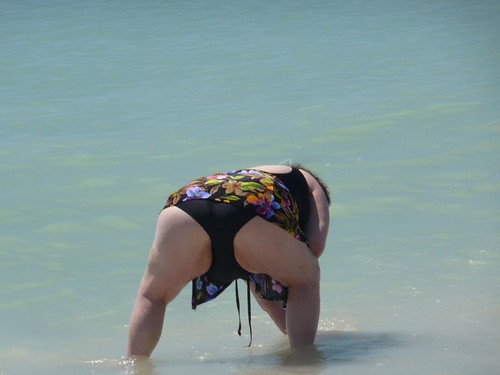 Well, here is what shelling looks like. I am sorry for not giving you fair warning but we didn’t have any either. This lady shelled in this position right in front of us for probably 3 to 5 minutes. If you want to know what it was like for us, stay right here on this part of the blog post for another 4 minutes. Hopefully this photo doesn’t cause our blog to lose its PG rating. 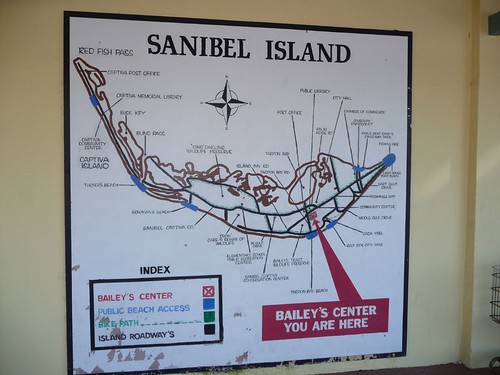 Well, if you are like us, you probably wanted to leave the beach by now. We did in fact do just that. We drove to Bailey’s Shopping Center where a recommended burger joint called ‘Cheeburger Cheeburge’r was suppose to be. They are suppose to have very good burgers but as it turns out, maybe it wasn’t good enough since they are no longer in business. 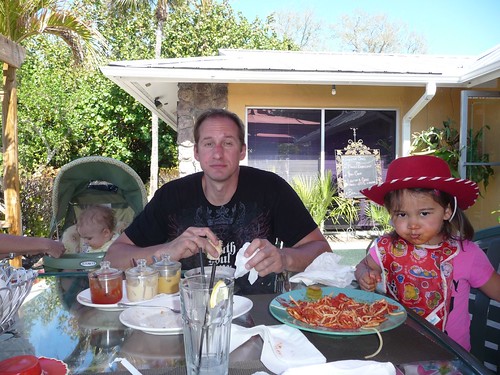 We ended up at Greenhouse Grill across the street from where the burger joint was and have some rather good burgers there as well. Here again is a rare photo of Paul. You can tell he was not ready for this shot and neither was Ava.

As we were leaving the island, we got another taste of what to expect in the Florida keys. The two-lane road on Sanibel is very prone to traffic jams during weekends and holidays. I had not been paying attention to my diesel levels before we left Fort Myers this morning and were running on fumes by the time we were waiting in the long lines to get back on to the causeway off of the island.

Rather than risking running out of diesel and getting stuck, we decided to pull over and wait for awhile for the traffic to ease up before going. This was probably the closest we have come to running out of fuel on this trip. A few blocks from where we had stopped, we learned that a gas station was still open. Thankfully so because we ended up needing every bit of the 3 gallons I put into the tank there before we found another diesel station on the mainland. 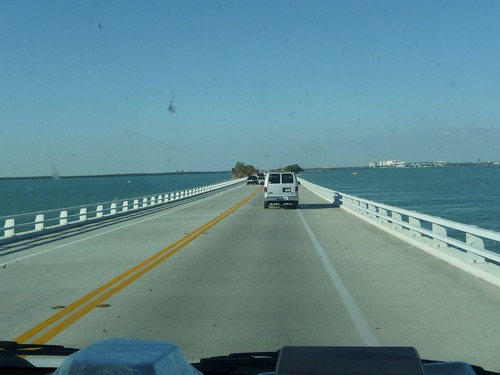 Once again, we were off to look for a place to spend the night. We weren’t looking to drive real far since we had wanted to spend the next week or so near the Naples area. Just up the highway was Koreshan State Park. We stopped there to see if there were any walk-in sites with little expectations. 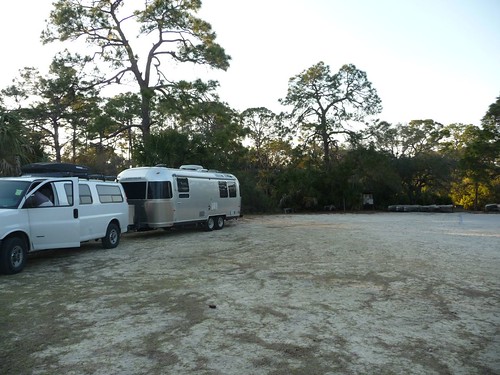 And we were right, they were all full. However we did learn another new thing about Florida state parks. A lot of them have what’s called overflow camping where you can pay a discounted camping fee to boon dock in the parking lot. No hookups and no shower privileges and you have to vacate by 8 AM. But it is a safe place to park for the night.

We did however take advantage of the playground there before the sun went down and here is Ava making her small screen debut. 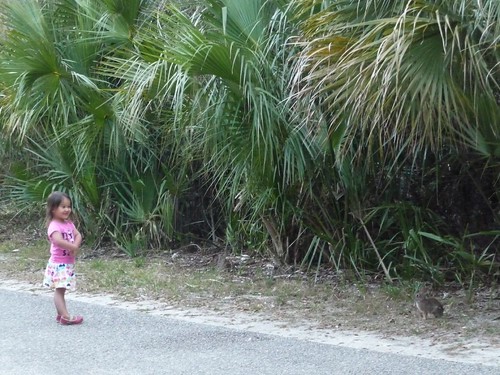 And saying good night to the friendly Floridan wildlife before another action-packed day starts tomorrow morning.

I came across your blog via the Florida State Park Twitter… and I very much enjoy reading your adventures. We’re coming from France to Florida for the next shuttle launch in less than 2 weeks, and I rented an RV. It’s great to look at your pictures and imagine ourselves in a few days from now 🙂

It will also be our first time with an RV, and I’m learning a few tips from you as well! BTW, I’m curious, what was your second option after Walmart?

Have a nice day…

Hi there, thanks for visiting our little blog. You guys should have a blast here in Florida as we are. It is a little difficult to get reservations on the weekends at some of the more popular places right now so boon docking at parking lots are a necessary evil. When you are inside city limits, there are no real other options since truck stops like Flying J or Love’s are not available. When I mentioned a second option, I meant another Walmart nearby.

I hope you guys have a great time here and I am jealous that you are getting to see a shuttle launch!

Thank you for the additional tips! I do hope we’ll see the launch, but nothing is guaranteed… It was already delayed by 15 days, and we’re keeping our fingers crossed it won’t be postponed again! Nonetheless, considering your daily feedback, we should enjoy the Florida roadtrip 😉

We’ll keep reading your adventures… Take care of yourselves!

We were there last October in our Airstream Motorhome. Beautiful beaches but the no-see-um-bugs were nasty! Or rather their bites… for a couple of weeks we were in agony. Hope to head that way again next month!
(Found your blog on FOTR site.) Good travels!!

Hi 5ennie. Those no-see-um bugs (and the see-ums) really got us this week. Argghhh! Your Airstream 350 is so awesome… and HUGE!

[…] in Boca Raton. If you have been following our trip, you might remember Paul and his family when they met us at Sanibel island a couple of weeks ago. He is letting us park the van and Mali Mish on his driveway when we fly back […]

[…] of work done. Thinking back, I don’t think we have boondocked in the parking lot since the night before our visit to Sanibel Island at a Walmart in Fort Myers. That was over a month […]

[…] of days from our last trip across Florida. We stopped for the day at Lover’s Key as well as Sanibel Island and got to park near the water and play on the beach just like we did […]