We boondocked at a Walmart last night after pulling into town just after midnight. The first Walmart that we planned to stay at had a sign with a silhouette of an RV and a big red X over it. I took it as them not really welcoming us into their parking lot. I hate coming in to town at night only to see that. We had to hunt another one down in the middle of the night thanks to our GPS and Google Maps, we found one just a few miles away. Fortunately for us, it was RV friendly.

That’s more than I can say for this little fella we saw the next morning while checking into the Bayou Segnette State Park in Westwego, Louisiana. 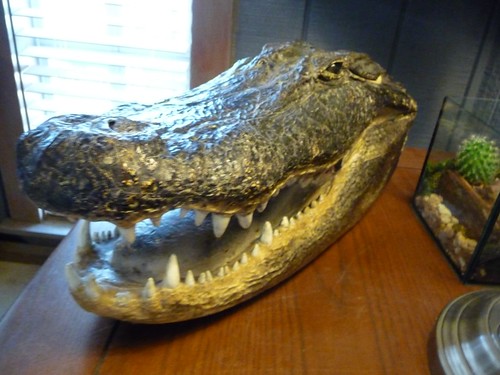 After looking high and low for the perfect place to stay near New Orleans, we settled on Bayou Segnette. It is one of the places that everyone seems to recommended even though it is not in New Orleans proper (About 15 miles out). 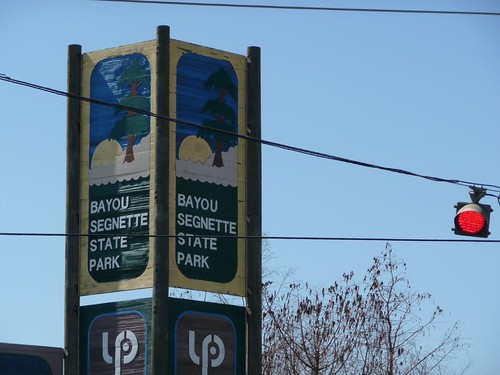 We stopped at the gate last night and realized that they lock it each night so there is no after-hour self check-in allowed at this place. Being a State Park, it is very affordable. For a water and electric-only site in a beautifully secluded part of the park, it only costs $16 a night plus $1 per adult per day. This is the kind of place we have been wanting to camp at since we left California. Texas state parks were great and the camping is very affordable but it’s their daily entrance fees that screws up our budget and jacks them up to near California levels.

Once we confirmed that there is solid phone reception and decent 3G coverage with our Sprint data card, we prompted booked a site for 7 nights. Who knows, if we like it enough we might stay for longer. 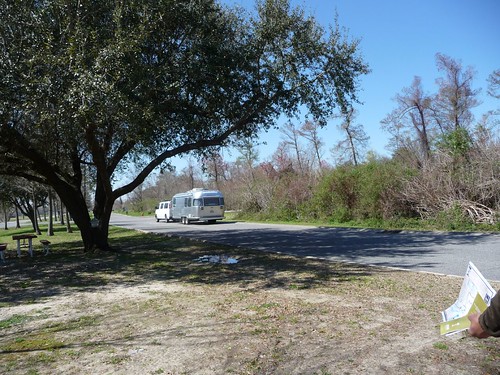 The campground is quite a ways towards the back of the Park. This place has lots of recreational activities to visitors all year round. Being right next to a bayou, many people come here to use their boat launching facilities. With various day-use area such as picnic tables and even a wave pool, it must be a destination for local residents in the warmer summer months.

After a few turns past some security gates, we arrived at the campsite. It seems to me that Bayou Segnette must have gone through some serious renovations since hurricane Katrina. Most of the facilities are new and modern including our electric and water hookups. 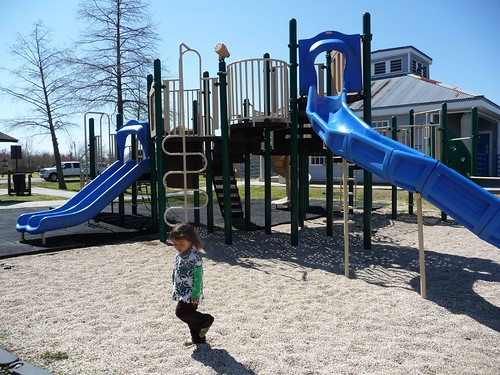 At the showers and bathrooms, there is a good size playground that we can walk to which Ava was very excited about. The best thing about this $16-a-night campground is that it has a laundry facility. And it is FREE!!!!

We couldn’t believe it. We had spend probably 40 bucks just in laundry in the last couple of weeks and that’s only doing our regular every day clothes. A few bucks here and there really add up. Because it is so expensive and inconvenient, we haven’t even washed our bedding in almost a month. We immediately started doing loads and loads of our laundry like a lost Saharan hiker gulping down water from an oasis. 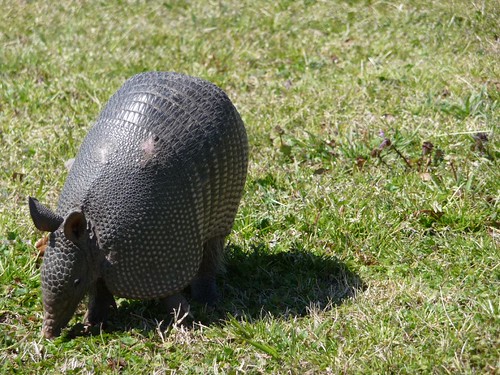 When we got back to our site, we saw some interesting wildlife hanging out at the grassy area. These armadillos are really tame and friendly. I guess they are use to co-existing with the campers at the park as they do not seem to even notice that we are there while they forage the ground covering for food. 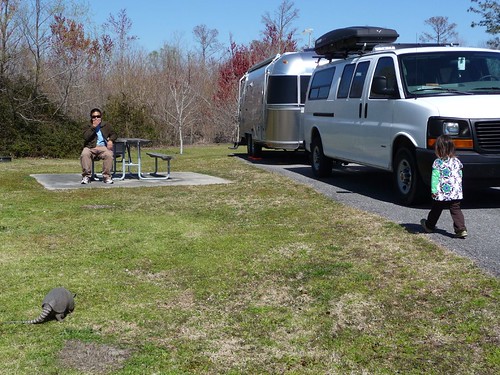 We had never seen armadillos in the wild before and it was pretty cool to have this guy hangout right next to us. And hangout he did. He probably scrounge in the nearby area for a few hours before disappearing into the trees.

At Walmart this morning, we bought Ava a little Barbie computer that she had been wanting ever since she got to play with Sophia’s. Now that we are not caravaning with them, we wanted to get one of her own. This one is not quite as sophisticated but it is better suited for her skill level. 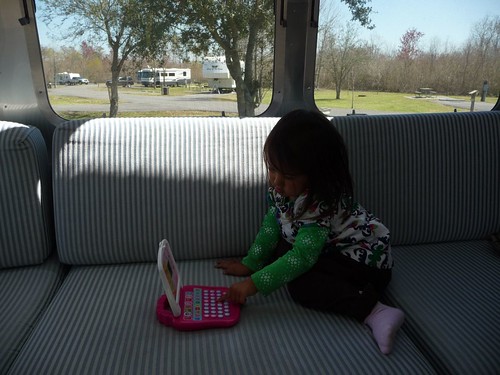 We decided that we were just going to hang out at the park and relax after a long day of driving to get here yesterday. 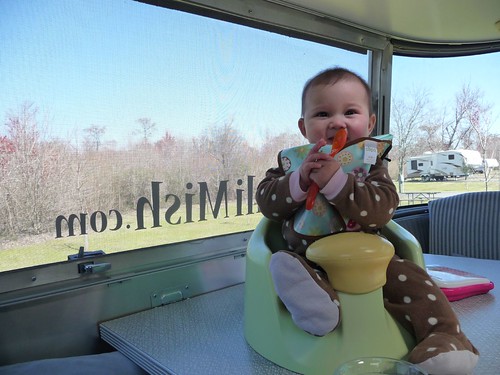 Mila got another chance to try her hands at eating some solid foods. 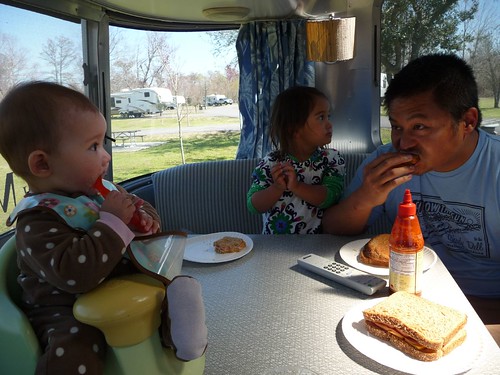 And for the rest of us, we had some sandwiches for lunch. They seem to always taste better with a little sriracha sauce in them.

Don’t worry Mila, I won’t put it in your cereal.

Reading this made us miss you guys, and trailer life!!!
Sophia is really happy that Ava has her very own Barbie computer.
Daniel and I are really jealous that you guys got to see a real live Armadillo.
Happy six-months, Mila, enjoy your real food!
Claire et al

We miss you guys too! It is weird being in a new place without you and your Caravel next door. Hopefully you are traveling safely back to New York and keep up updated with everything. Hope you see you guys again soon!