We have been wanting to visit a Camping World ever since we got into RV’ing. Unfortunately there isn’t one in our home town. The closest one is about an hour away and we hardly ever drive thru that area. Interestingly enough, there has been a sign off of the freeway a few miles from our house that reads ‘Camping World Ventura! Coming soon!”. That’s great! I thought when I first saw it. But that was over 2 years ago. I have given up the idea that there might be one coming in anytime soon.

This last weekend we went up north to visit my brother and mom in the bay area. On the way back, we stopped in San Martin, CA where a Camping World is just off of the 101 freeway. We could not have been more excited to go inside and check things out. 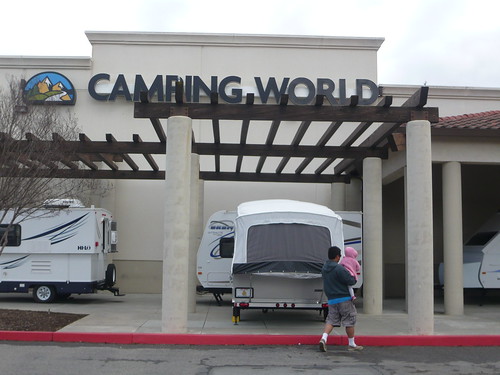 I think I was expecting it to be a lot bigger than it actually was. After all, it is supposed to be an entire world of camping! Well, it is not the Costco sized building I was expecting but more of a grocery store. But that was actually big enough to have lots of products I had wanted to see and touch. 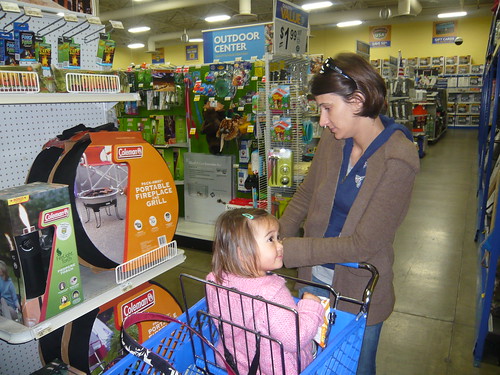 In the outdoor cooking area right after we walked in, there was a backdrop of a white box trailer with a real awning and various cooking gear setup with chairs and a table. It seems we instinctively were drawn towards the BBQ and chair. 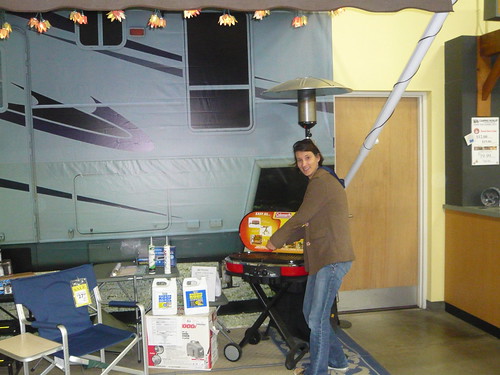 Here is Marlene pretending to cook at the gas BBQ. In reality, she is much better at eating BBQ than cooking it. 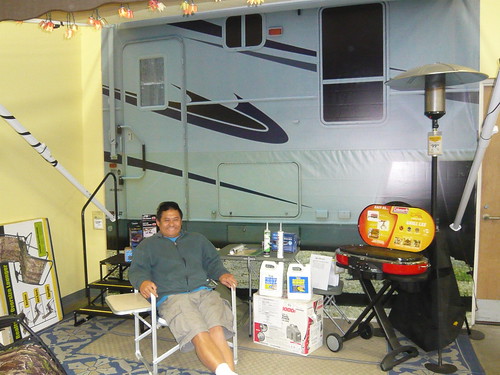 I, on the other hand, was born to do this. Sitting under the awning and smiling foolishly. 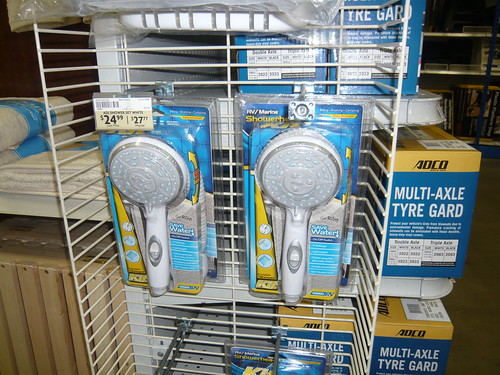 As we start preparing ourselves for full timing, we are trying to adopt various ways of conserving our resources since we expect to boondock quite a bit. Water, unlike electricity which you can generate, can run out quickly especially if you use your shower while off the grid. There are a number of replacement shower heads that can drastically reduce the amount of water you use by pumping air into the water to create a pressurized mist. It uses less water yet creates more coverage of water on the body. We have heard good things about the Oxygenics shower heads specifically but have yet to pulled the trigger on one. As a matter of fact, we walked out of Camping World without spending any money at all! It wasn’t because we didn’t want to, we just decided to do more research and price shop on everything before going back to make the purchases. So here are more photos of our window shopping excursion: 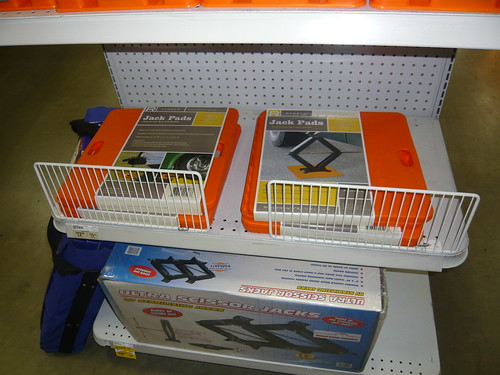 Jack pads. Nothing fancy but I think I will stick to 2×6 pieces of wood for now. 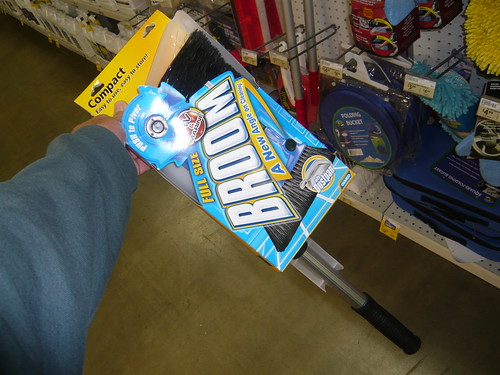 A ‘full-size’ and ‘compact’ broom at the same time! Isn’t technology amazing? 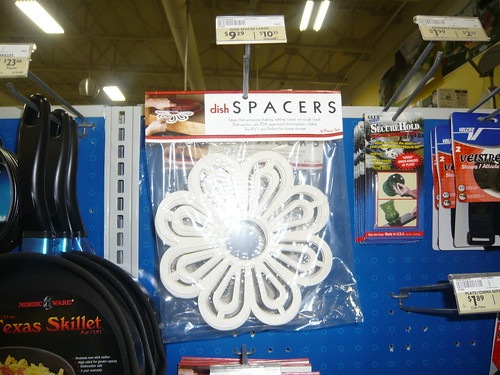 Dish spacers so your dishes don’t rattle themselves into a million pieces in the cupboards while you drive. These people have thought of everything. 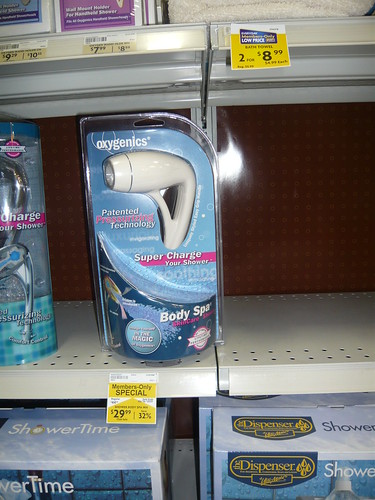 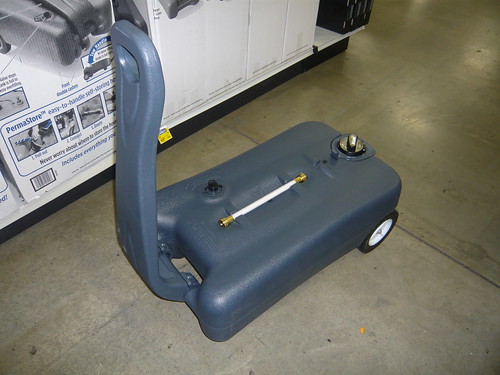 This water tank caddy is actually the main reason we wanted to come to Camping World. If you remember one of our previous posts, we have had some issues with completely filling up our grey tank when we are camped at partial hook-up sites. We noticed that many people had a caddy similar to this that they used to shuttle their waste water to the dump station and we thought it would a great idea to pick one up. 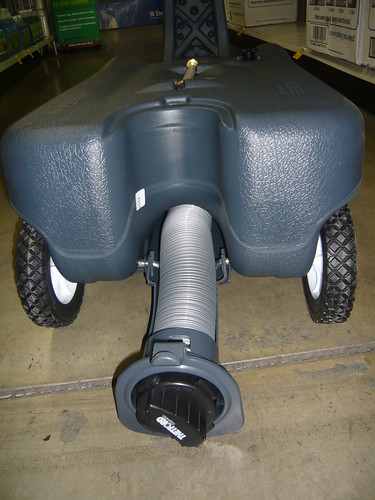 This 15 gallon model made by Thetford has everything. Swivel wheel, integrated dump hose, flush valve, the works. 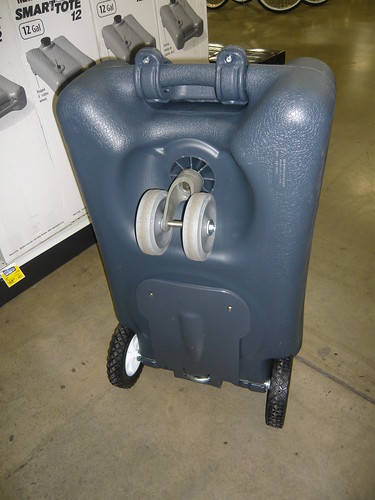 Now we just need to figure out where to store it. That has become one of the biggest problems we have encountered with the Airstream. There is no external storage of any kind. The only storage space that might be called external is the outdoor access to the space under the queen bed. I don’t think I want to storage a plastic box that will potentially storage black water on the inside the trailer or the car anytime soon. Plus this caddy costs almost $200. Back to conservation! 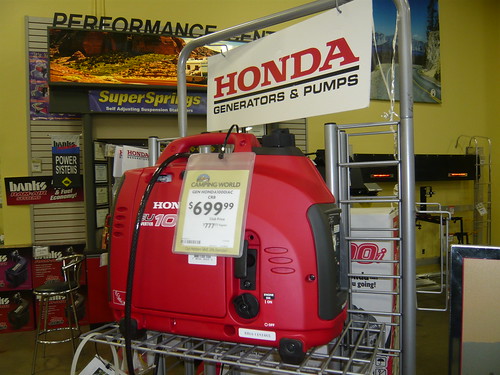 When it comes to generators, it is hard to beat the Honda EU series. Camping World had them on display and for decent prices. The great thing is that you can daisy chain them to create more power with multiple units as you need it.

With the Airstream, a single 2000 watt generator does not create enough power to start the A/C unit but it will keep it running once it gets going. Most people who wish to use the A/C unit while boondocking will use either a single Honda EU3000i or a pair of daisy-chained Honda EU200oi. I personally am very interested in finding out whether or not I can run our A/C unit by connected a 1000 watter with a 2000 watter. This way I can pick and choose at any moment what level of electrical needs I require and be able to conserve the amount of fuel I consume. It generates about 23 amps of power at full throttle with the 2 generators daisy chained. That is more than enough to kick the A/C on as it is needed. 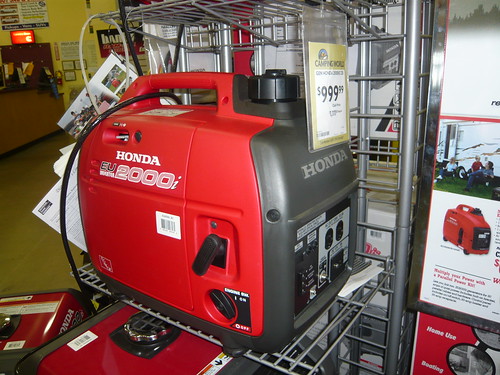 Here is the 2000 watt model. It weighs in at just under 60 lbs which is reasonable. The issue of external storage comes in again for us with the generators since they are gasoline burning machines lubricated with motor oil. That is not the scent you want to have on the inside of any living space. One of the ideas is to fabricate a front hitch for the van that I can use to mount and lock both generators as well as the gas cans I will need to carry the fuel in. More immediately, I plan on storing it in the rooftop cargo box. It will be interesting to watch me carry these machines over my head.

Speaking of boondocking, Camping World is another one of the retailers who allow overnight parking of recreational vehicles in their parking lot. I guess it would be a little ironic if they didn’t allow it. None the less, it very cool to have it as a resource. In the parking lot this late Sunday morning, we were actually the only vehicle that did not carry a commode.

As we pulled into the parking lot, we saw a classic  1960s Airstream International Ambassador parked in the lot. It is in dire need of either a new clear coat or a thorough polishing. Other than that, the exterior was in beautiful condition with no visible damages. 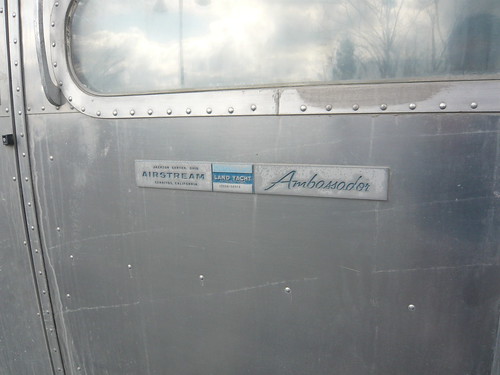 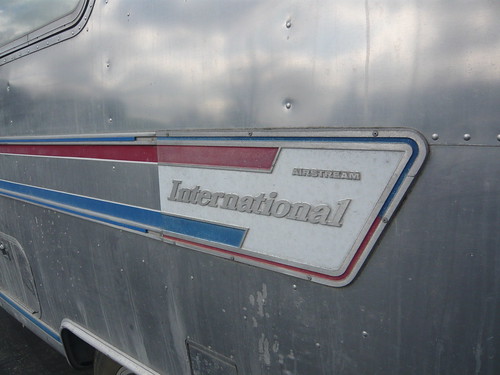 The starboard side of the Ambassador. 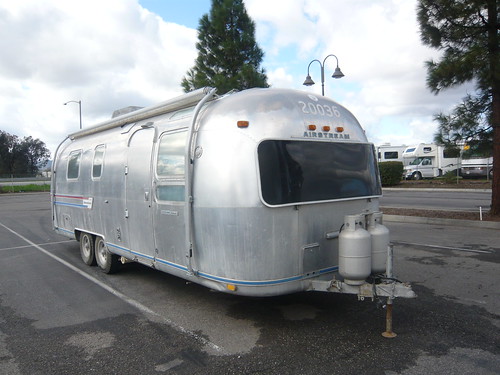 And the port side of the same land yacht with my tow vehicle in the background. 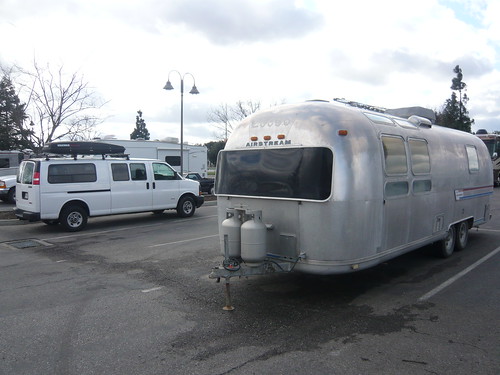 Isn’t she beautiful!? One day I will own a classic Airstream.

I am in the market for a vintage airstream. Thank you for the informative blog!