Where we’ve been hiding our Airstream.

Some of you many be wondering where our Airstream has been these past two years? But more realistically, you must be thinking where the heck have WE been! Haha.

Somehow life got in the way of documenting it all… between homeschooling all three kids, downsizing to the pop-up truck camper for 18 months, adding a Casita trailer to the mix to help Dan have a separate office space, adventuring with new and old friends, driving everywhere from the eastern tip of Canada to the bottom of Mexico and everywhere in between the past two years. I’m not making any promises for the blog nor for the VLOG except that Dan and I are both trying to make an effort this year. Hopefully that answers some questions.

So back to the Airstream… 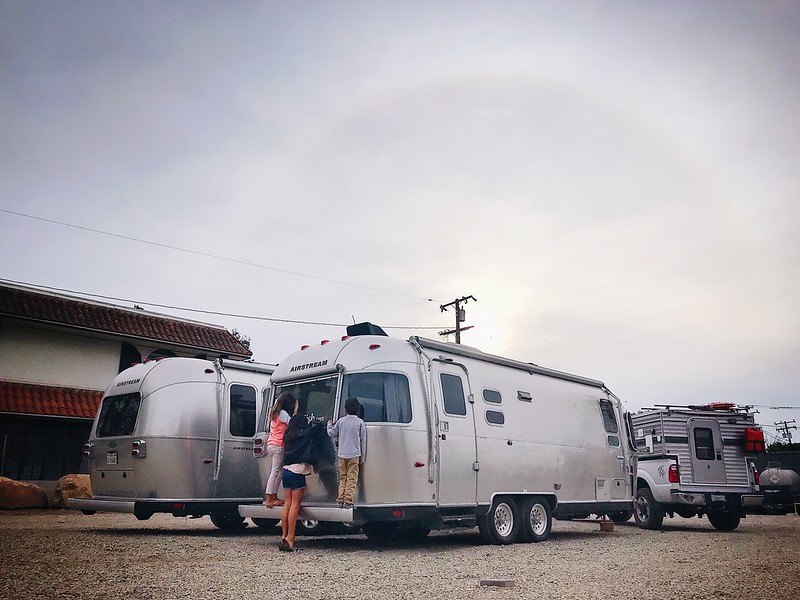 For the past year and a half, our Airstream has been part of an Airstream hotel up in Ojai, California called Caravan Outpost. Our Airstream, which we still call “The Mish”, was one of the 12 Airstream hotel rooms available to rent there. We feel lucky to have been part of such a beautiful project since opening day. The owners have done a breathtaking job on setting up such an unique experience for its visitors. It’s a little hard for us to say good-bye to this place. 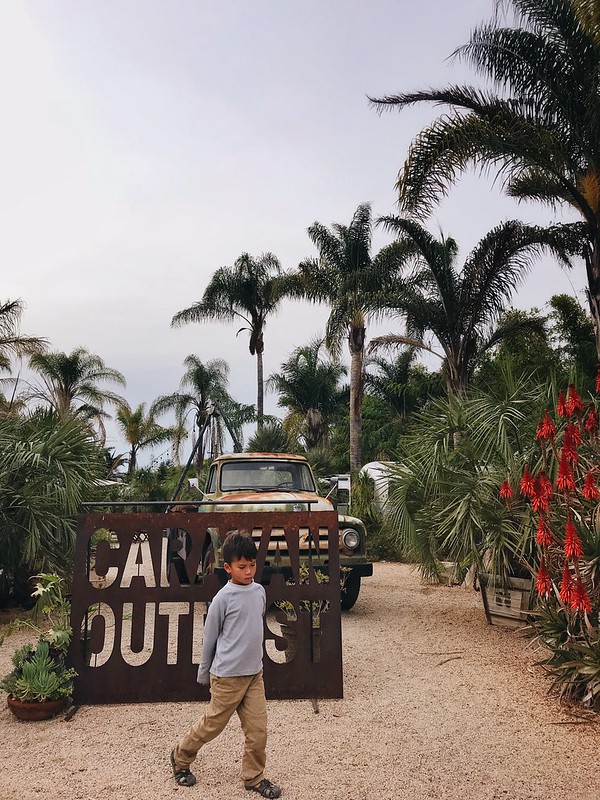 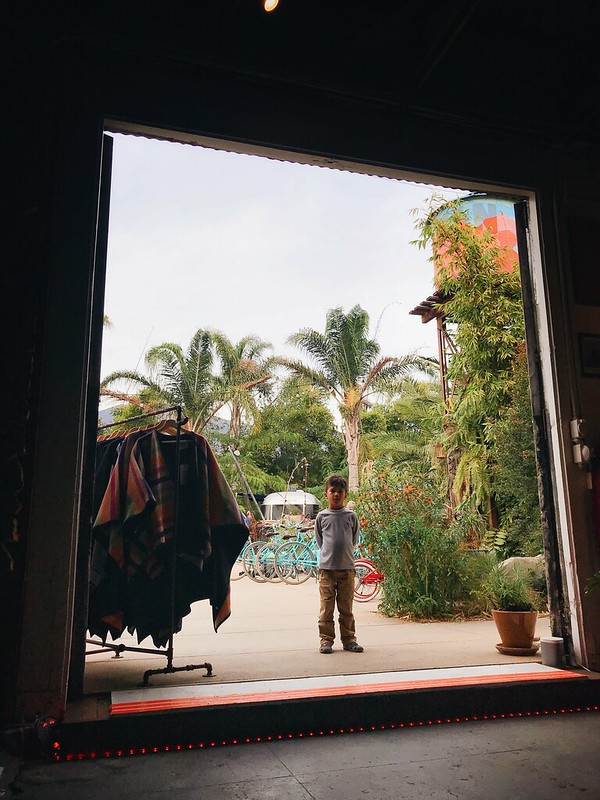 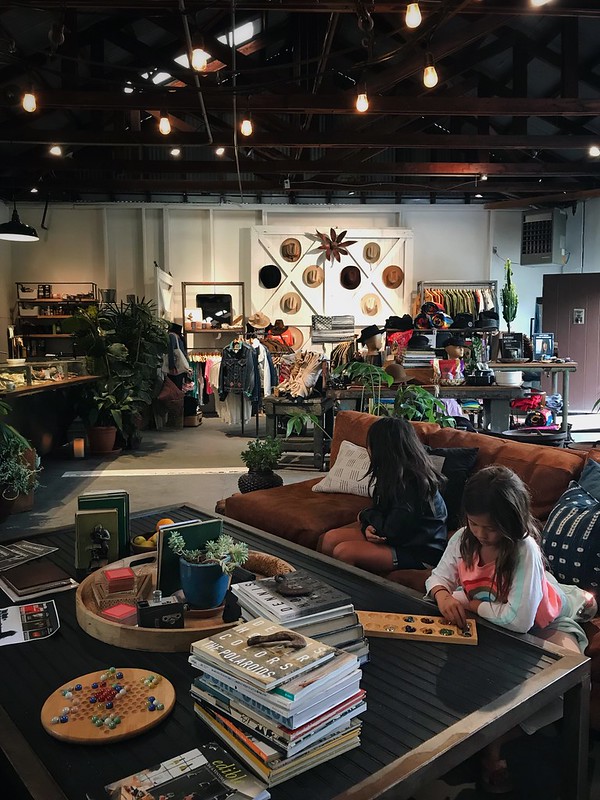 But a new fleet of Airstreams arrived to replace some of the older models and thus The Mish is no longer part of the hotel. The kids were excited to get their hands back on our old lady. She’s been with us for ten years and will always be part of the family. No plans to sell this beauty. 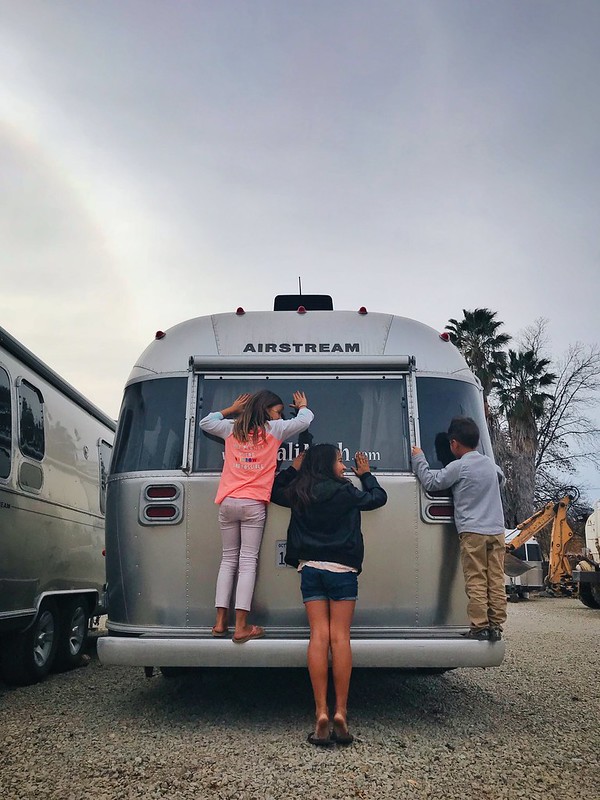 The kids immediately climbed atop the bumper to peek into its windows. “It has a TV!” they screamed, “And an oven, too!” Dan and I couldn’t help but to giggle. These kids and their memory problems. Most of their lives were spent inside and outside of these aluminum walls but yet they don’t remember crap. Cracks me up. 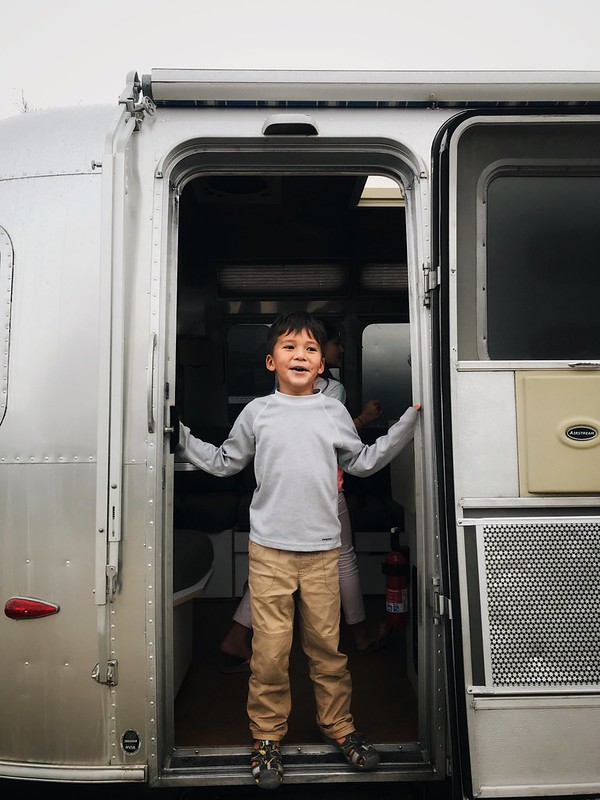 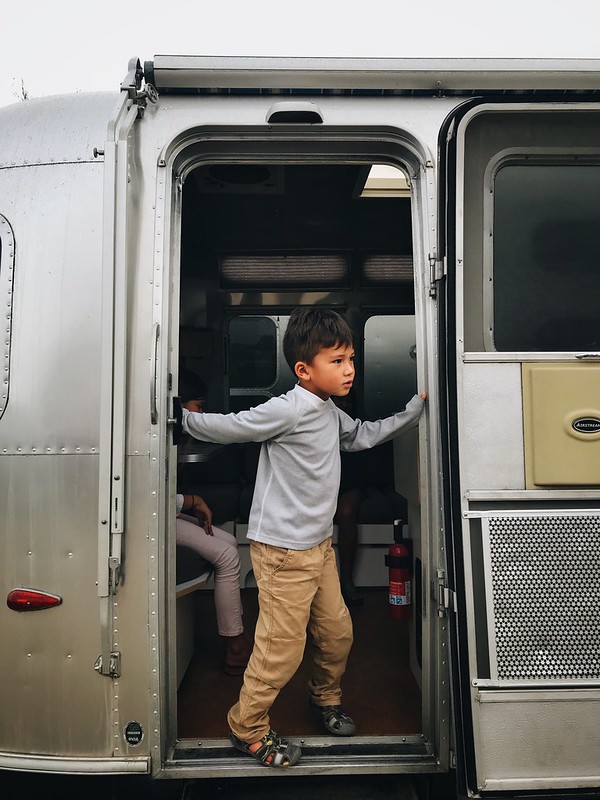 With the recent devastating fires in this area, we were surprised not to find more ash inside. While the fires raged in Ojai, we held our breath to hear if The Mish would survive. Feeling pretty thankful for the hard work of the firefighters and the whole community to be able to sit inside of her again. 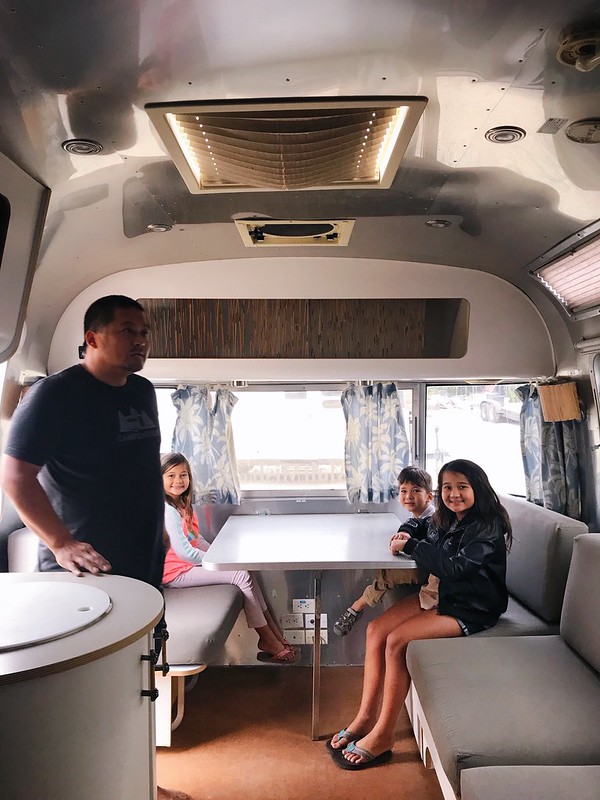 The hotel replaced our cushions from the stock Ocean Breeze fabric to a green gray fabric. It was time for the replacement after raising three little children in here. The curtains need to replaced too but not until I find a similar pattern or exact replacement. We love the open and airy feeling of the Ocean Breeze model and would like to stay loyal to it. 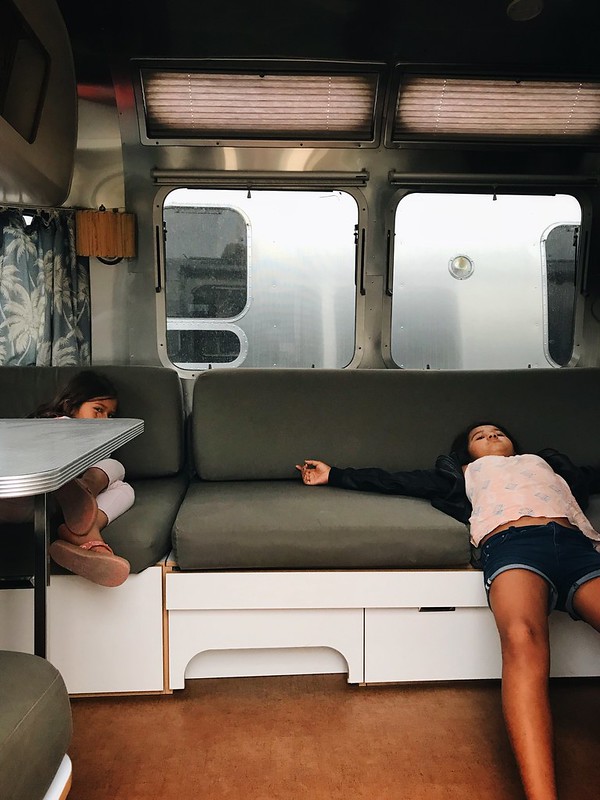 In case you forgot, we also travel with Yoda the cat. She’s now 15 and can say that she has lived in two houses, two trailers and one truck camper. 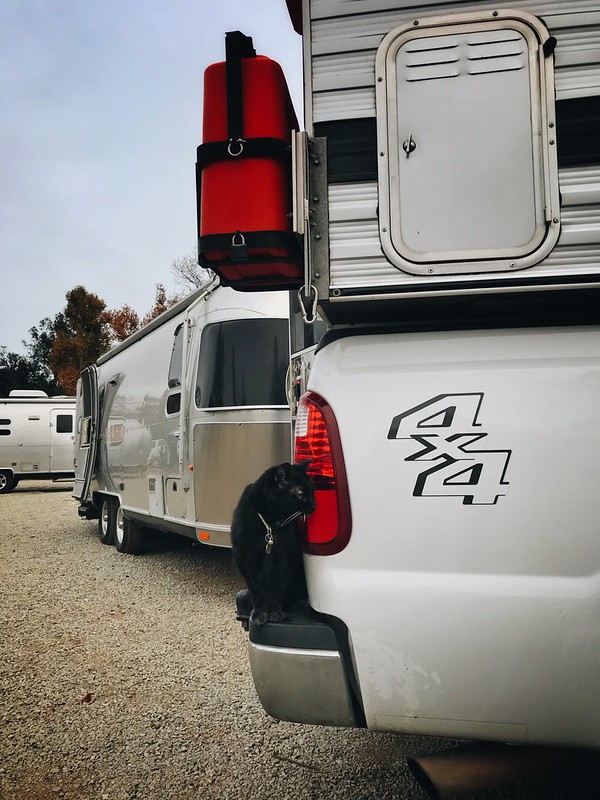 I threw her into the Airstream to see what she would do in there. She swiftly walked from the front door, down the hallway and directly to her hiding spot under our bed. Hey, kids. Yoda had a better memory that you! Hehe. 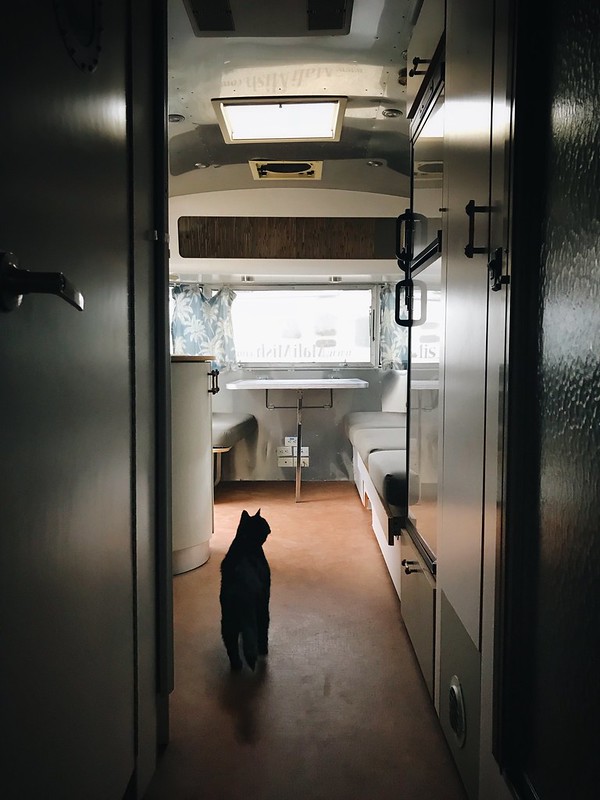 Time to get this Airstream road worthy again after sitting still for two years. First, it’s time for new batteries. 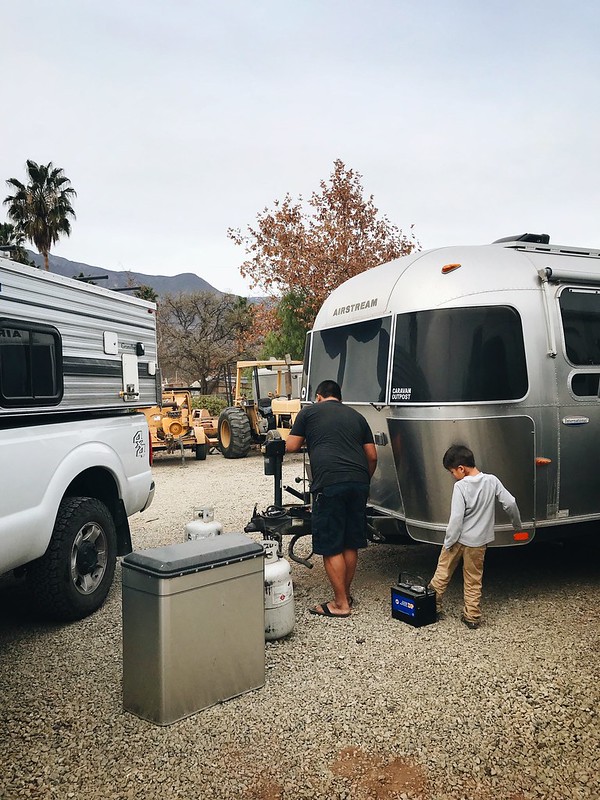 And hopefully we can figure out how to re-install our Hensley Hitch again. It’s been awhile. Maybe we should ask Yoda. 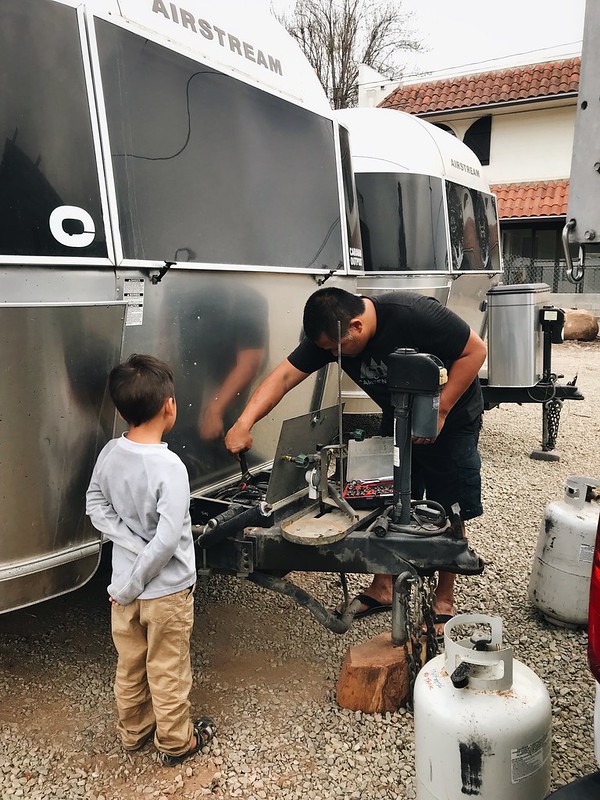 Truthfully, we are not sure what to do with the Airstream. Would love to keep her as an AirBnB for a bit longer while we still fit in our smaller set-up. But that involves buying land and finding someone to partner up with to handle the day to day stuff. I’d hate to just take her to storage again where a family of mice could move in and wreak havoc. If you have any ideas, please share. 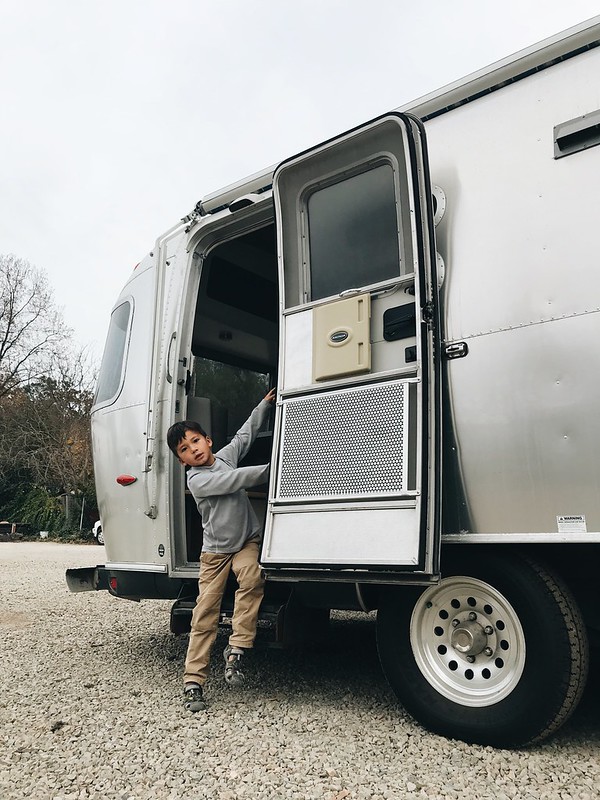 Thanks for still reading and following along on our adventures all these years. It means alot to us,

For those of you who want a close-up look at Caravan Outpost, here is a link to a video Dan made last year.

Cool that you are writing again! I follow you on IG, so I had seen the update on the Mish. I don’t have any ideas except temp housing for someone displaced by the fires???? I say that while sitting on the east coast and only offer that as an outsider looking in.

I popped on here to check back entries about the UP Michigan area for our summer travels. I don’t remember if there were blog entries or vlog entries, but I think you all introduced me to the area a while back. We are summer travelers (yes, we help clog up the campgrounds 😉 ) and this time of year I start plotting it all out!

Thanks for sharing your lives!!
Renee

Hi! Yes we have some blog posts from Upper Michigan if you search in the search bar. Thanks for the comment and for following along on our travels 🙂