It has been awhile since we posted on this blog. That is because we have been busy getting ready for our next adventure. Since we got back to southern California in March, we have been doing a fair bit of local traveling. Before we head out on our next trip, I thought it might be a good idea that I first catch up on our travels since we got back. This was back in April of 2013 when we headed out to the California desert to meet up with some friends. You might even recognize them. 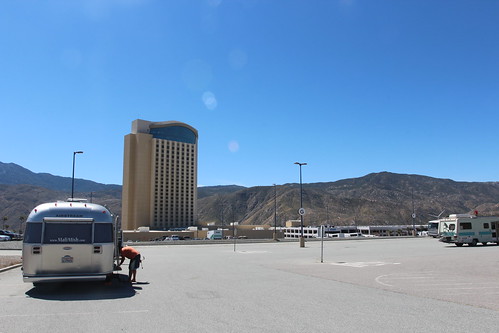 A usual, we headed out of Los Angeles in the dark of night. It’s not because we are vampires, have warrants for our arrest or cannot handle the heat. It is because of the horrendous traffic. Leaving LA at night is the only way to go. We made our usual stop at the Morongo Resort and Casino just north of Palm Springs to spend a free night so we can get an early start in the morning to head to our campground for this trip: Pioneertown. 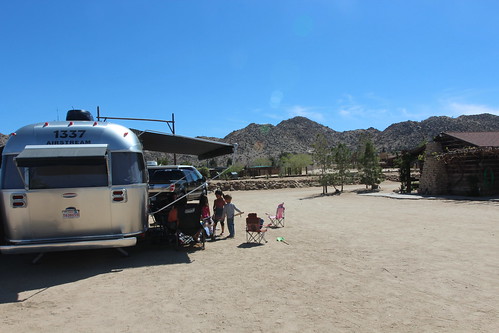 We have been to Pioneertown a time or two in the past. Last time we were here, we were headed towards Albuquerque for our first Balloon Fiesta. Pioneertown doesn’t exactly have a campground. However, the Pioneertown Hotel allows RVs to park in their dirt lot for $15 a night with no hookups. Dry camping (boondocking) works for us because we are set up for it. That is pretty good for California. For those who follow full time Airstream families, you might have noticed that the Airstream in this photo belongs to Josh and Jessa of 1337stream.com. 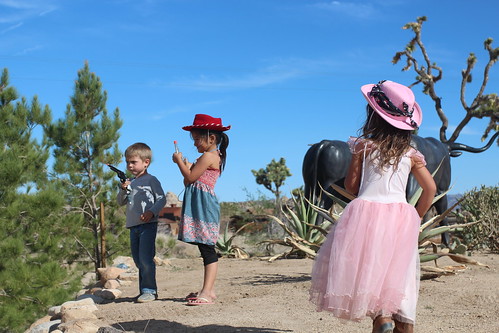 We last saw them at the beginning of our 2012-13 cross country trip. The girls met their son Jack for the first time at Alumafandango in Denver, CO. They became fast friends and have been looking forward to playing with him again. They had stayed put for several months during and after the holidays in Josh’s hometown in Kansas. A few months ago, they finally headed back out on the road and were traveling west. We waited for them to make their way to California and jumped on the chance to rendezvous as soon as they got into our state. 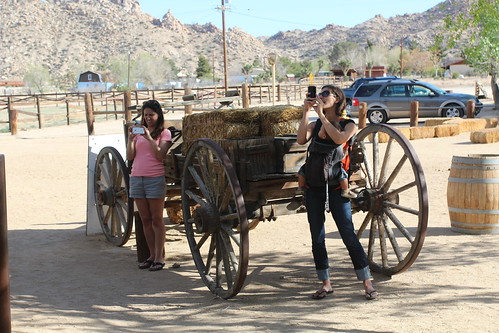 Josh and Jessa are prolific photographers on the social network Instagram. We started actively using our account since last year and have become nearly as addicted to it as they have. This is pretty much how things look most days: Us holding our phones up trying to snap a pic. 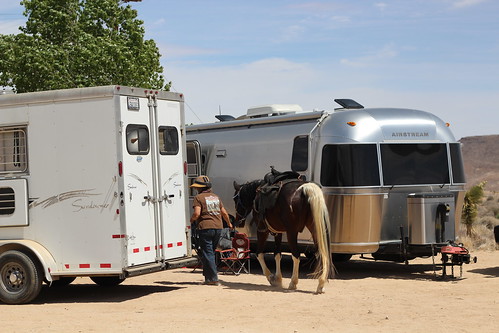 This is our spot at the Pioneertown Hotel. We tucked the Mish in the corner next to a horse trailer. There was a ‘Women and their Horses’ kinda of weekend going on there with several ladies hanging out and riding at the hotel. 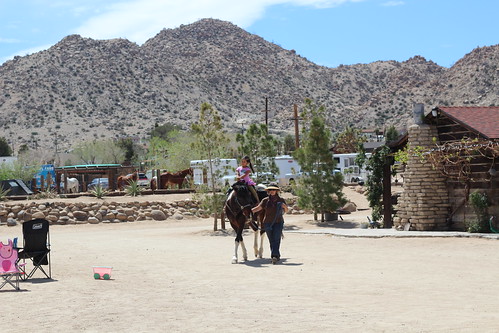 Not only were the kids thrilled to see horses so close, our neighbor even offered to give our kids rides for free. Ava jumped on the opportunity but Mila was a little shy and stayed on the sideline. 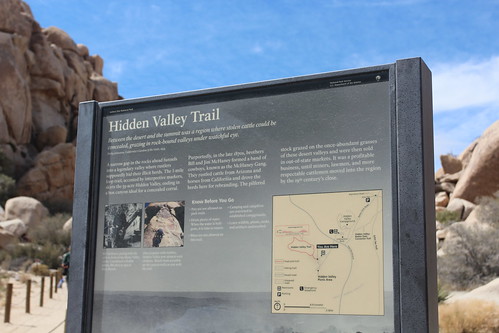 On our second day here, we decided to head out to Joshua Tree National Park together. It is actually kind of embarrassing but this was our first time ever being here. It is probably the closest National Park to our home base but we have always taken it for granted. 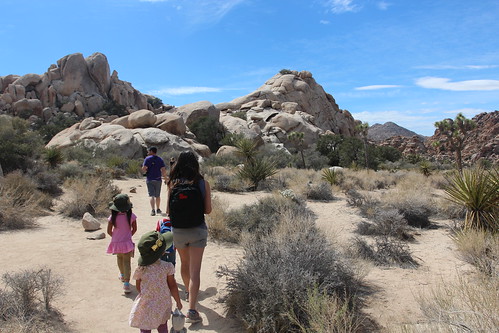 Ava has slowly become quite a little hiker since she turned 6 years old. In fact, here in Joshua Tree was the first time that she has really gotten into the activity. With all of the rock formations in the park, she found that climbing had become one of her new favorite activities. Mila, on the other hand, tried her best to keep up but being a three year old, she still poops out pretty quickly. 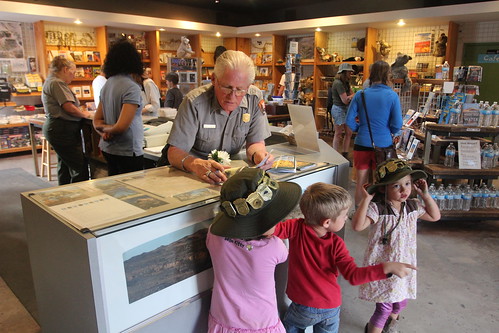 The girls were happy to get back to collecting their Junior Ranger badges. This park ranger was really eager to help the kids continue to build their collection. 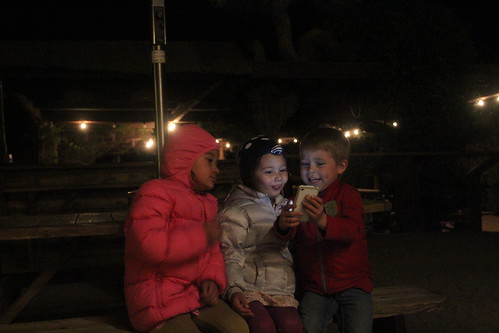 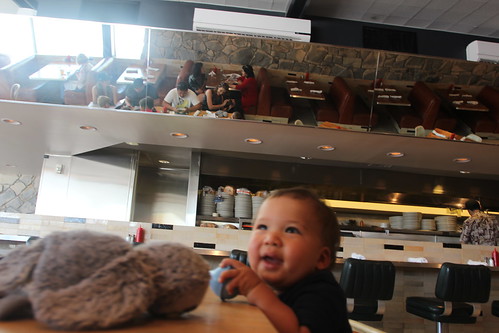 We only stayed a short 3 days with Josh, Jessa and Jack. On our last day, we drove into Palm Springs to find a nice pool to swim in. We typically hit up the Ace Hotel but when we got there, they had just closed the pool due to some incident involving a child having an accident. Don’t worry, the child was not hurt. I think it involved the kid accidentally discharging into the pool.  Instead we just had lunch at the diner King’s Highway. This is Marlene taking a photo with her camera of all of us looking at our phones. 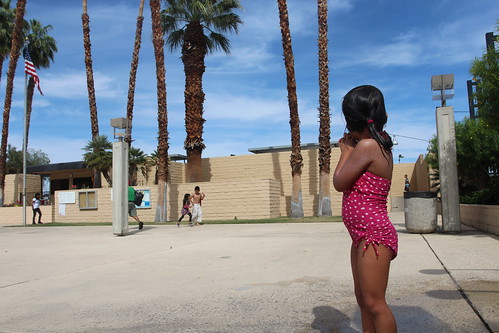 We did finally find a pool for the kids to dip in. Just around the corner was a community pool. Not quite as hip as the Ace Hotel but it will do. 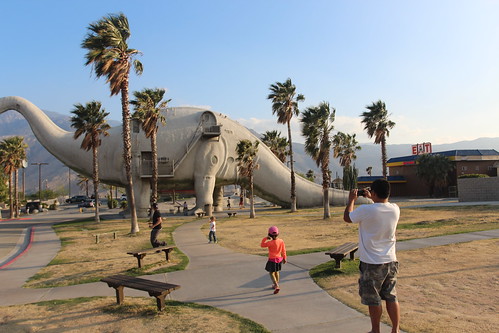 Our visit with the Works family in the desert ended just after we made a quick stop at the famous Cabazon Dinosaurs. We will see them again real soon.

Glad to see you post again and looking forward to your next adventure. The kids looked like they were having a great time.

Happy to hear you are gearing up to hit the road. I look forward to some great adventures as I travel vicariously through your blog.
ps – nice to see ‘Fandango Jack…he’s getting big as are your babies 🙂

Glad to see your back. I bought our 25ft 2007 Airstream back in March this year and started following you then. Our families 1st trip was to Bahai Honda in the keys. We plan on taking a longer trip out of Florida next summer maybe heading out west. We also have small children and its fun to see yours on their travels and get some ideas for the future. Thanks for your blog.