We packed up this morning and left Lake Cahuilla County Park knowing that it was our last night before getting back to see some family. But we still have a long day of activities before that happens. We are here in the Palm Springs area to relax but also to attend the annual Vintage Trailer Show at Modernism Week. 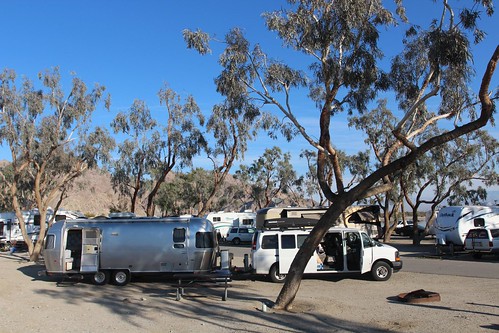 A month or two ago, if you asked us about attending Modernism Week in Palm Springs, we would have completely dismissed the possibility. We were still way out on the other side of the country. It took us over 5 months to get out there and we were comfortable with our pace of travel. If was inconceivable that making it back this quickly was possibility. Over the last few weeks, we have been moving at a furious pace. Partially it has to do with my work schedule. When we have a lot of driving days, I tend to not be able to get a lot of work done. But as of a month ago, I committed to working for a new company based in Santa Barbara. I will be a full time employee but they will allow me to work from home. With that agreement, I had to set a start date. That means we are here because we have to, not necessarily because we wanted to travel as such a fast pace. 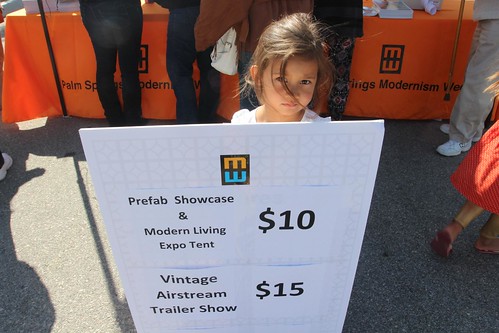 This is our third year in a row attending the Modernism Week Vintage Trailer Show. That last 2 years have been organized by our friends Rich Luhr and Brett Greiveldinger. You might know them as R&B Events who put together the Aluma-Events for Airstream owners. They decided after last year’s show that they were going to pass the baton to someone else this year and they passed the responsibility to another one of our Airstream friends, Mona Heath, whom we met for the first time at our first Modernism Week two years ago. 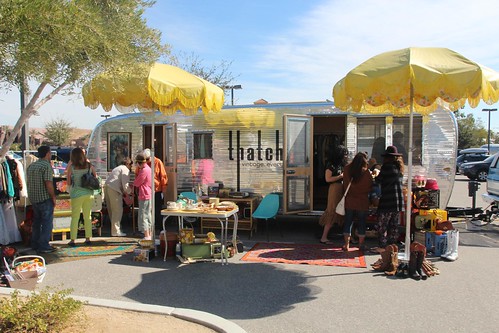 This year is the biggest of the three shows that we have been to. Aside from all of the show trailers, there are also lots of vendors running their businesses inside trailers like this one from Thatch Vintage. 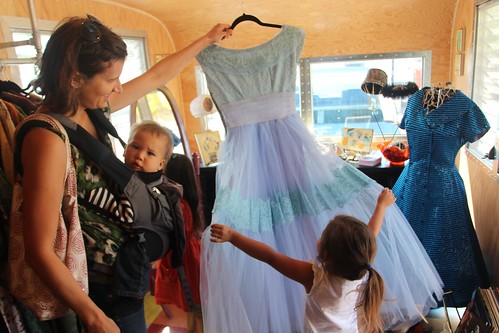 Mila was enamored by this vintage dress. It might be just a little too big for her yet. Marlene also found a vintage enamel bowl that she has been eying for some time. 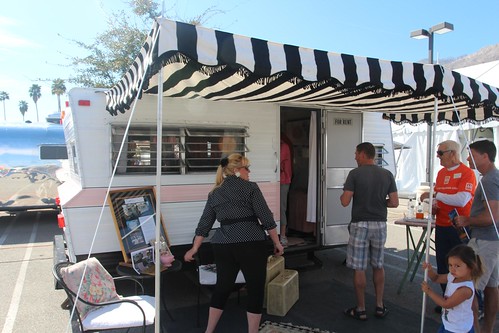 This is the girls favorite trailer of them all. Any of you have a guess as to why? 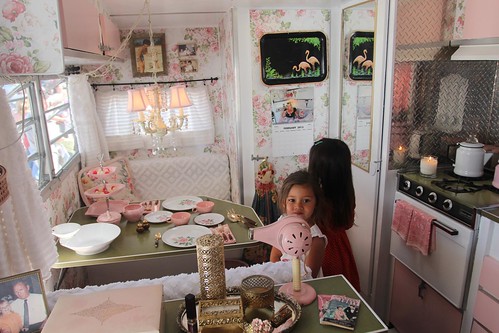 The owner is actually from our old stomping grounds of Ventura, CA. It doesn’t come across as well in pictures but there is an overwhelming amount of pink in there. 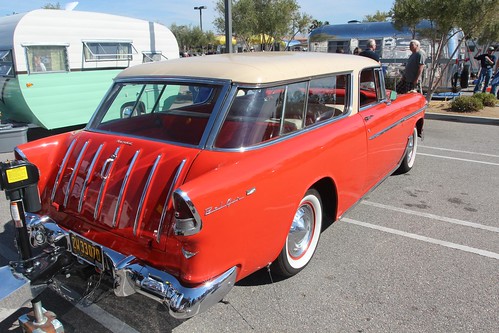 Our favorite is this Airstream Ambassador. Actually this is the awesome Chevy Bel Air station wagon that tows it. 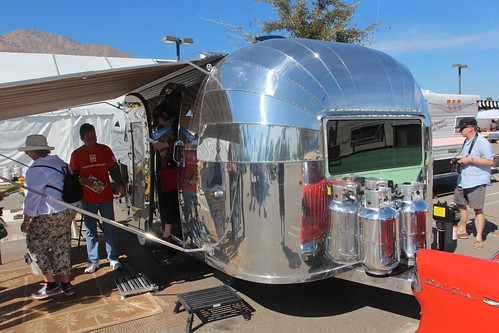 Look at the polish job on this baby. Right down to the propane tanks. 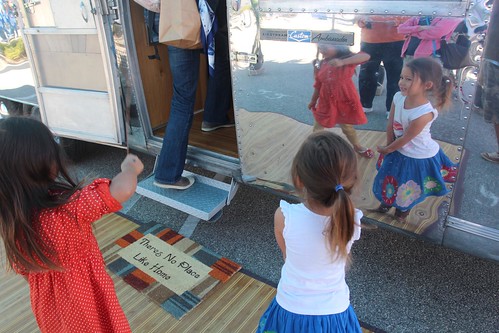 This kind of mirror-like polish job is not for the faint of heart. Not only is it difficult to achieve, keeping it looking good like this all the time is an near impossible task. 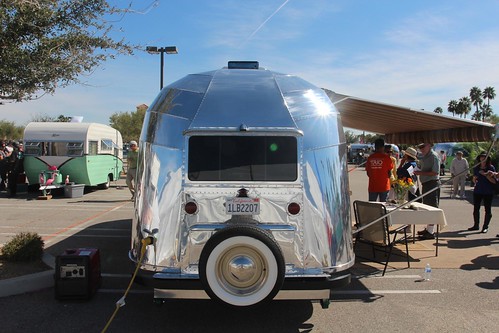 A shiny polish job can sometimes distract the eye from seeing imperfections around the other parts of the trailer. Not this one. This one is absolutely perfect. 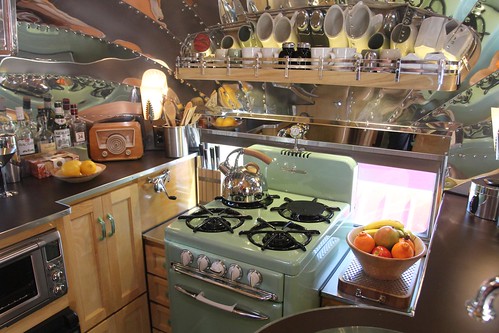 The end caps have been drilled out, removed or replaced so that it can achieve the level of perfection the owner was going for. Look at the cool vintage stove! 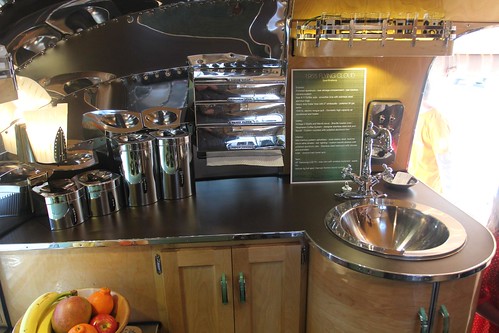 I have seen very few trailers that look as good as this one. Even fewer people who have the skills and patience to build one. 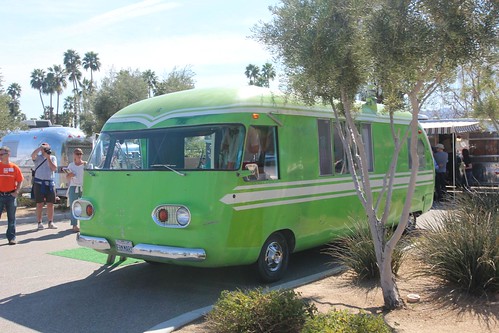 Another cool trailer is this UltraVan. These were built in the 1960s and only about 370 were made. More than 200 of them are still running and many have more than 500k miles on them. 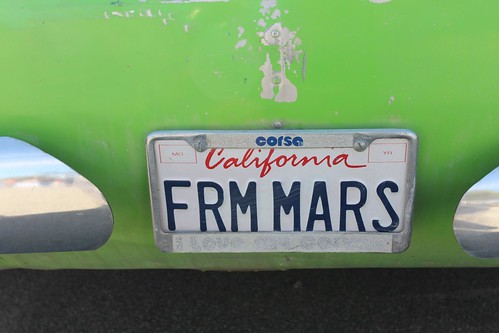 It is powered by a Corvair engine and gets about 15 mpg while hauling around its 3,500 lb curb weight. Our friends Greg and Jenn from Bare Naked Family recently bought one and will be heading back out to full time once again soon. 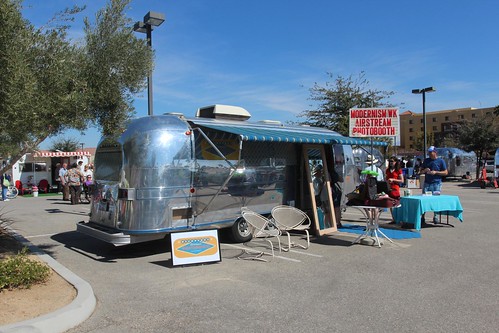 This here is the Blue Steel Airstream Photo Booth. We have been following them on Instagram for awhile and knew from some of the photos they posted that they were here. They are a young family from Los Osos, CA and run a photography business. 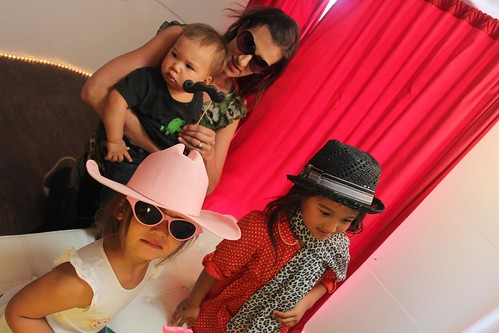 The Airstream Photo Booth is really cool and comes complete with props. The girls loved getting dressed up with the hats, glasses and fake mustaches. 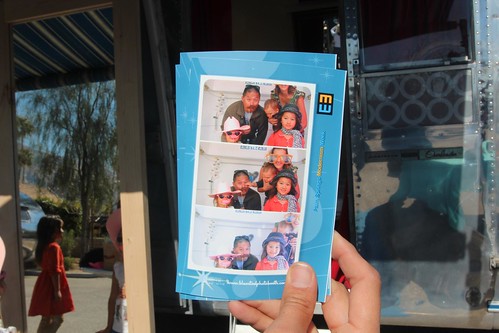 If you are looking for something unique at your next wedding or event, you should check them out. I am not sure how much it costs to have them come out but it is a really neat idea. 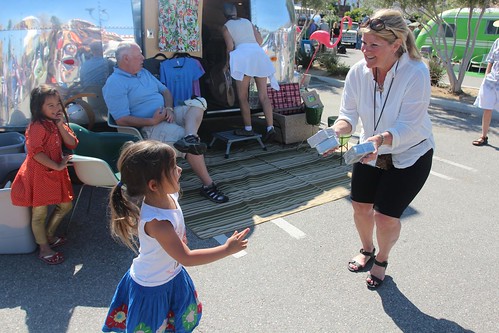 We eventually got to meet up with our friend Mona who was running the event. The girls loved getting a little extra attention from her today. 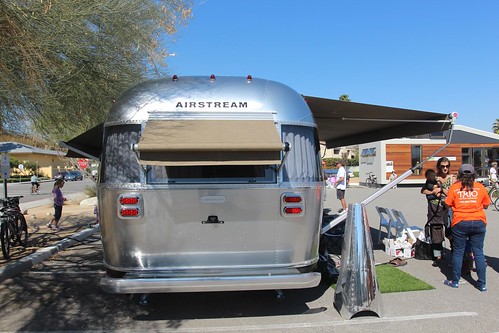 Finally, we were able to come check out the new Airstream Land Yacht prototype. For some reason, they decided to display this at the Pre-Fab area which required another admission fee. We had to basically pay a separate charge just to come see this in person. 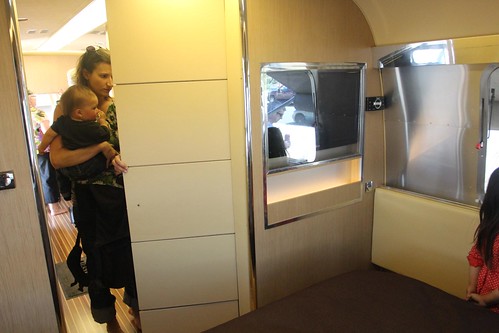 It turned out to be a pretty big disappointment. The trailer itself had a lot of interesting design concepts but being that it wasn’t the final production version, a lot of things are not quite as polished when you look up close. The TV in the bedroom was behind some plexiglass that had a really bad glare for practical use. Some of the fixtures have broken off probably due to this trailer being visited by so many people since it was first announced during the RVIA show in Lousiville during November of 2012.

Our worst experience with our tour of the Airstream Land Yacht concept actually has to do with the person who was giving the tour. It was a lady from Southwest Coaches, an Airstream dealership in Southern California. Ironically, that is where we bought our Airstream back in 2008. Before we even walked in, she noticed that we had kids with us. Immediately, we overheard her badmouthing to the people in front of us that kids have been coming through and destroying everything in the trailer. As we walked in, rather than giving us information about the trailer, she opted to give us dirty looks and told us to take our shoes off and not to touch anything.

Our visit didn’t last more than a couple of minutes. The entire time she was staring at us to make sure we weren’t touching things we were not suppose to. Before we left, Mila sat down on the gaucho seat and her legs naturally went up because they are too short to reach the ground. She immediately scolded her by telling her to get her feet off of the couch. She just had socks on and wasn’t even wearing shoes. As I noticed that she was wearing a name tag that denoted her association with Southwest Coaches, I told her that we had bought our Airstream from there. You’d think that being a former, and possibly future, customer of the place she works at, she would consider changing her attitude. Well, not so much. She asked which one we had and I told her it was the Ocean Breeze 25FB. Her responded with, “Well, that was a LONG time ago.” Wow, I was completely baffled. Without another word, we left.

To give Southwest Coaches some credit, word got to them that we have had a bad experience with one of their employees. I had commented on a facebook  post about the Land Yacht (using my personal account) about a rude lady at the display and was contacted by Airstream’s VP of Marketing. She apologized to us and we had a couple of nice exchanges over email about all the things we love about Airstreams. The sales manager from Southwest also emailed me and apologized for what we experienced. He even offered to give us a free wash and wax next time we bring the trailer there. I appreciated the gesture but as we have not been back there since we bought the Mish, we will probably not be going back.

As a whole, the show was a very positive experience. The weather was perfect in Palm Springs and we saw a few more familiar faces at the event that welcomed us back to California. We are now really starting to feel like we are home as we got back to the Mish to finish the last leg of our trip back to Marlene’s parents house for the evening.

The girls were thrilled to see Marlene’s parents as they were to see the kids. They had been following along for the last 7 months and kept in touch with us throughout our whole adventure.

Marlene’s brother David, AKA ‘Deets’ also made it home to see us when we returned. Even though our cross country trip officially ends here, we are still calling the Mish home for a couple more weeks before we move back into a traditional house. The last 205 days on the road had been amazing and was one of the highlights of my life. We hope the girls will look back at it as fondly as I do when they are older. There are lots more extended trips in the Mish in store for us but this will official close a chapter in our big book of Airstream adventures.

What a bittersweet post!! Since we are friends on Facebook/Instagram I know the trip ended sometime ago and that you are still on the road pretty often but this still almost got me a bit teary eyed knowing the “big trip” is over. As always, I can’t wait to read more about your adventures! 🙂