Day 198: Hanging out at Gilbert Ray Campground and an Airstream meetup.

As some of you might know, we have been back in California for some time now and have gone on many other adventures within the state since then. However, we cannot start sharing about those experiences until we are done with these last couple of weeks of our trip around the country. This is my best attempt at wrapping these last couple of weeks up so we can move on closer to the present. Let me rewind back a couple of months: Today, we are in Tucson. 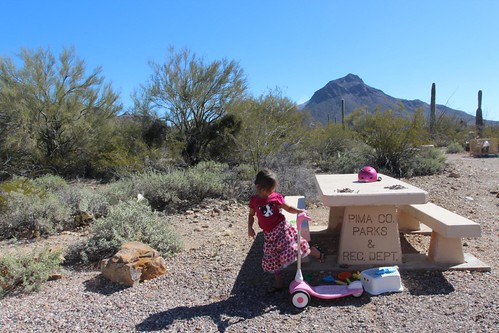 We have not been in Tucson for quite awhile and it is really nice to be back at the perfect time of the year. It is so perfect, everyone is here in town as they host a very popular city-wide gem show. 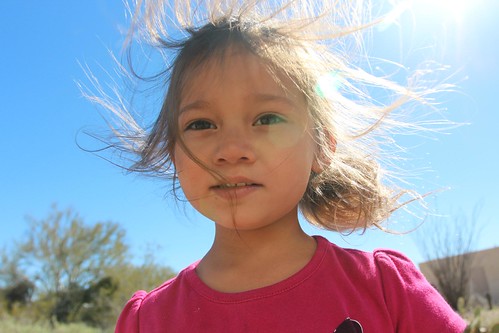 Our campsite at Gilbert Ray is pretty spectacular too. After a few nights of boondocking in parking lots, we got a great nice sleep here. Even though they only have electricity, water fill stations are everywhere here. For just a few days, we are sitting pretty good. 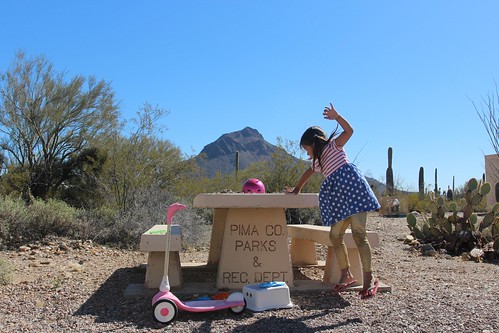 Ava has been asking a lot about riding her Razor scooter. Her old pink 3-wheeled scooter has been handed down to Mila as we decided to do a little exploring of our surroundings at Gilbert Ray. 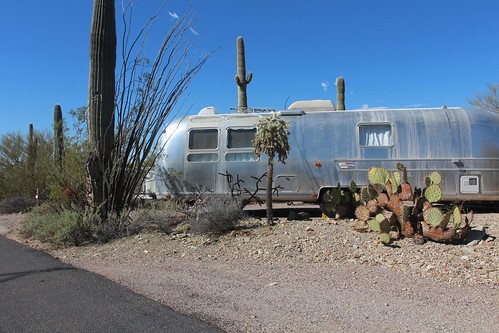 The first annual Alumafiesta Airstream Rally just recently ended and according to the event producer and our friend Rich Luhr, many of them relocated here. There were a handful of Airstreams but we don’t know if any of the ones we saw had attended the event. 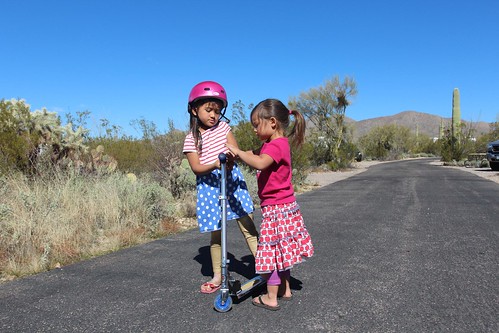 The old 3-wheeled scooter is really kind of a pain in the butt to ride and always hasn been. Mila decided to just bother her sister instead of taking it along during our walk. 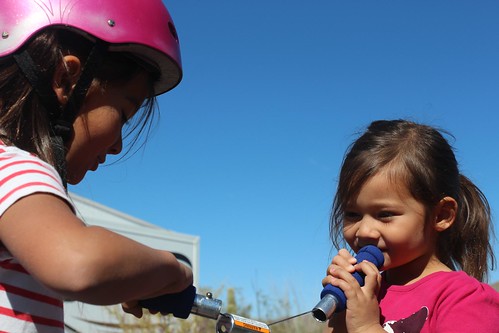 Oops, the handle bars broke off! 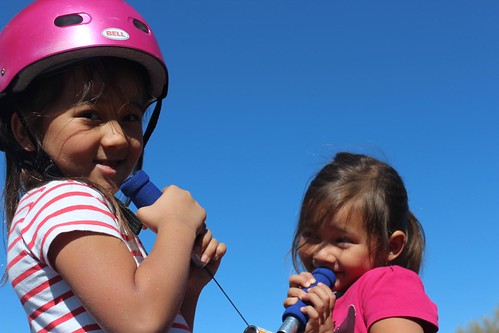 “What handle bars? These are microphones!” 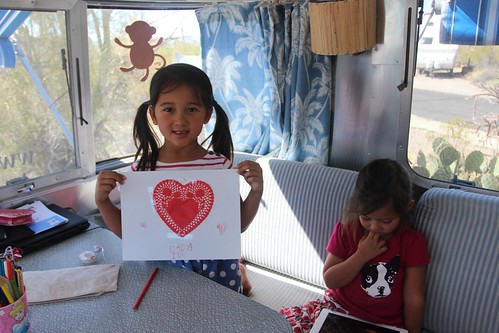 When we got here yesterday, we contacted a fellow Airstreaming couple who have been in town for a few days about meeting up. They had been staying at Catalina State Park’s overflow lot and were not thrilled with it. Today, they are relocating to Gilbert Ray which we were excited about finally getting to meet them. 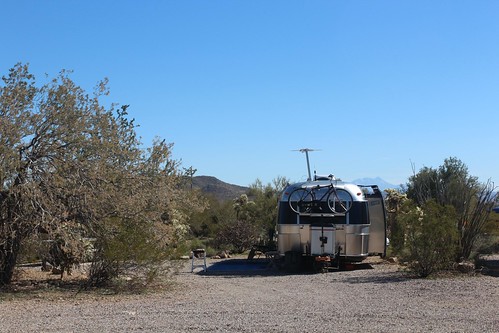 When headed over to their campsite and saw a rare Airstream with a slide-out parked right around the corner from them. 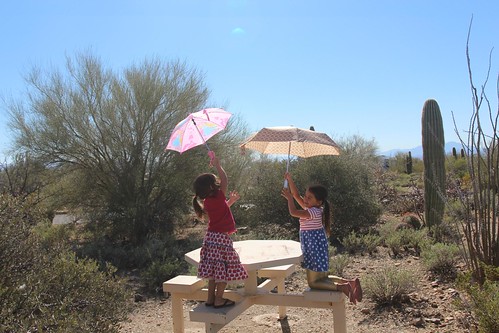 The girls like to use any excuse to bust out their umbrellas so we agreed to let them bring it along for a little sun protection. 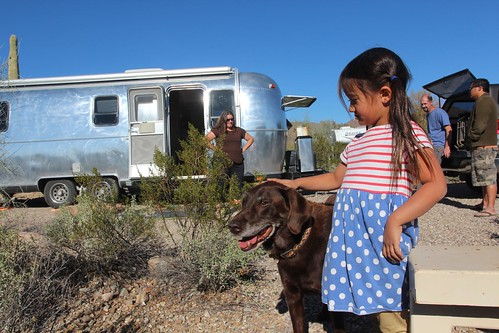 This is Phineas. Tim and Amanda‘s travel buddy. They are from Vermont and have been on the road for just about the same time as us. We have moved at a much faster pace than them so here we are having done a loop while they have been enjoying their time along the west coast. 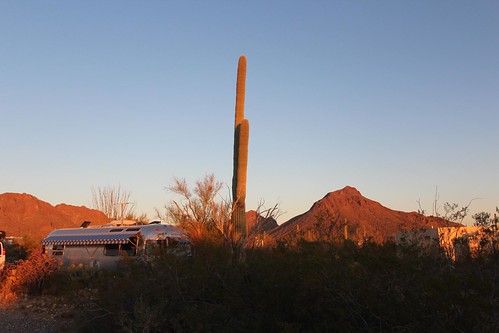 Here in the Sonoran Desert, giant saguaro cacti are the signature species. We are living right next to one which isn’t actually that special as they are everywhere. 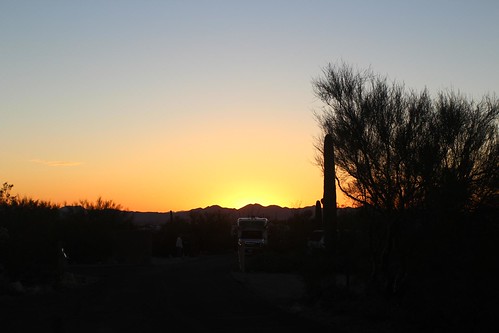 As the gorgeous sunset disappeared to the west, we are expecting to meeting another Airstream couple here at Gilbert Ray. 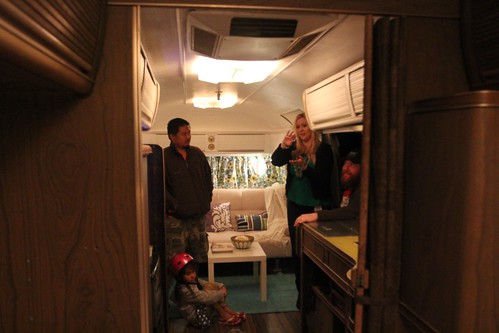 This is the inside of Jenny’s 1974 31 ft. Airstream Sovereign. She and her husband, Matt, are from the Phoenix area and have been friends with us on Facebook and Instagram for some time. We talked them into coming to Gilbert Ray and they were eager to meet up with us. They have not had their Airstream for long and have big plans for making some great changes to it. Matt is a custom furniture maker and I am sure when they are done with this thing, it is going to be out of this world. 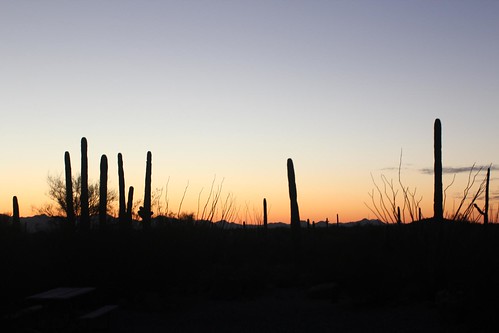