This morning Luka found a new past time in the Airstream. He found the toilet paper roll and decided that it was fun to unreel the entire roll on to the floor of the bathroom. Our sweet little boy is slowing turning into a little devil. 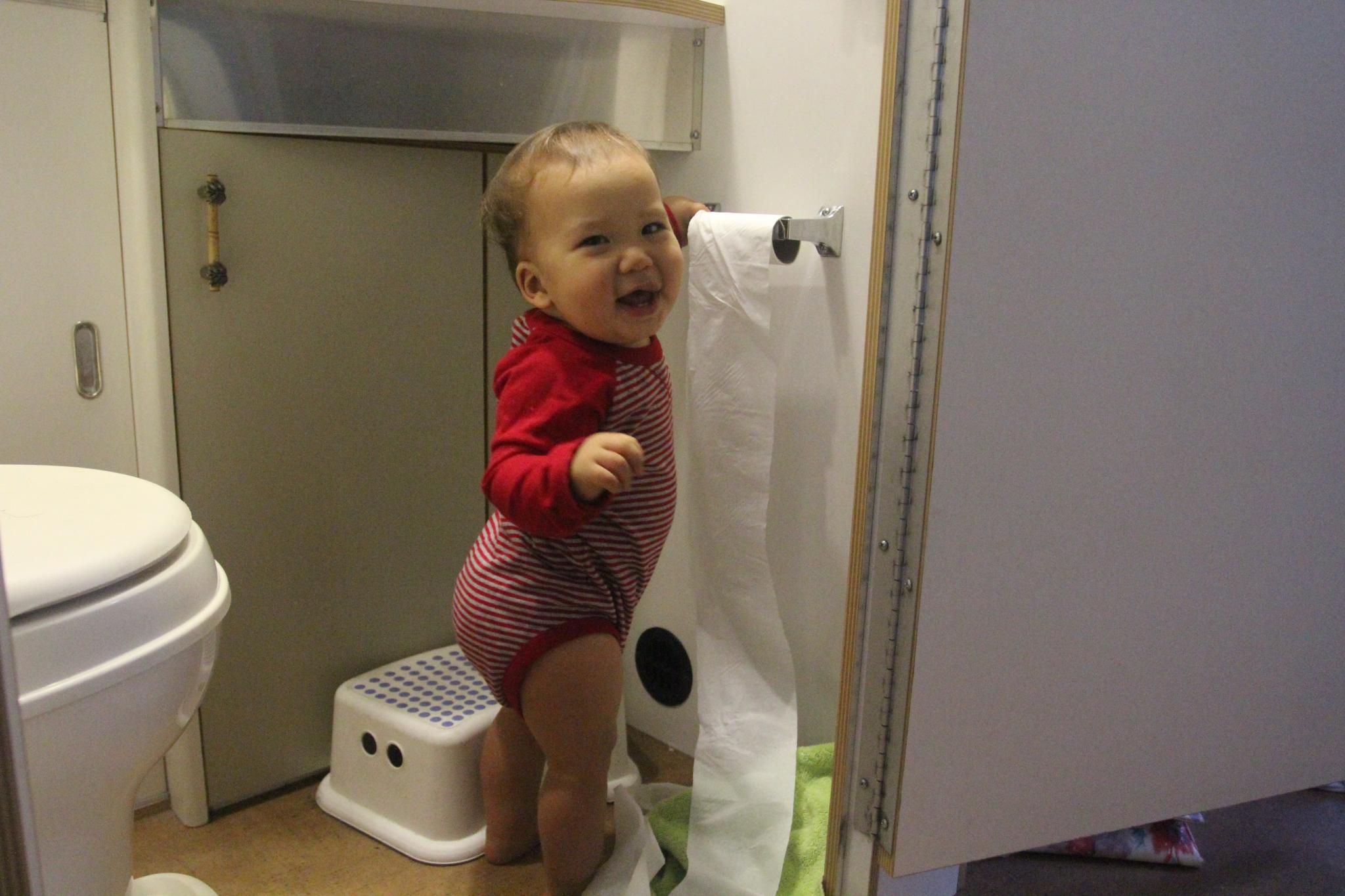 Our two night stay here in Palms RV Park is coming to an end. We are not going far today as the Johnson Space Center is only about 15 miles away. Rather than paying another night just to leave the Mish here, Johnson Space Center has a nice, big parking lot that is RV friendly. It makes more sense to just pull up our stakes and head over there. We will spend the day there and leave for our next destination from there. 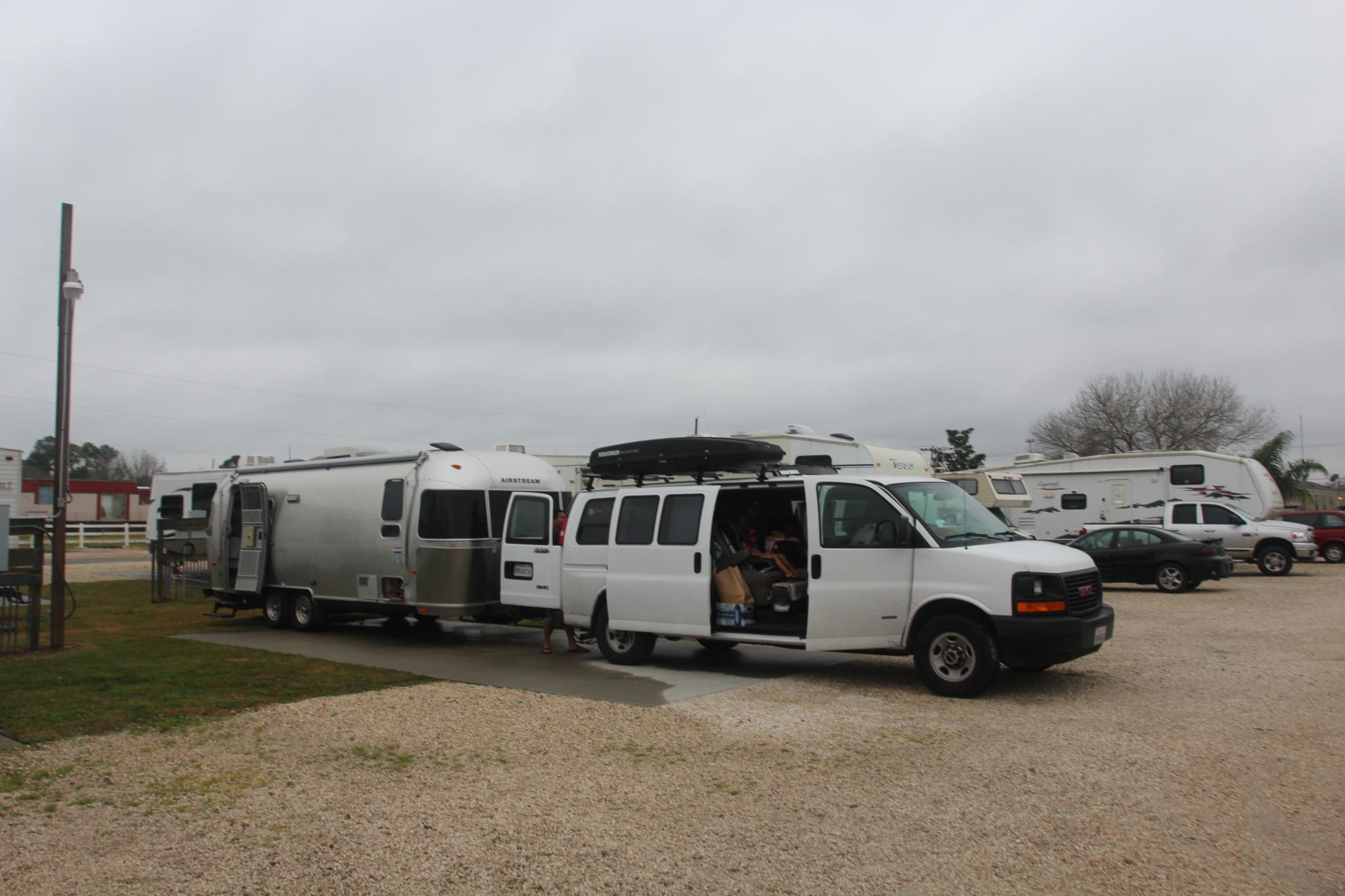 The skies looked pretty gloomy and the forecast was calling for rain pretty much all day. We quickly packed our stuff together and headed out. 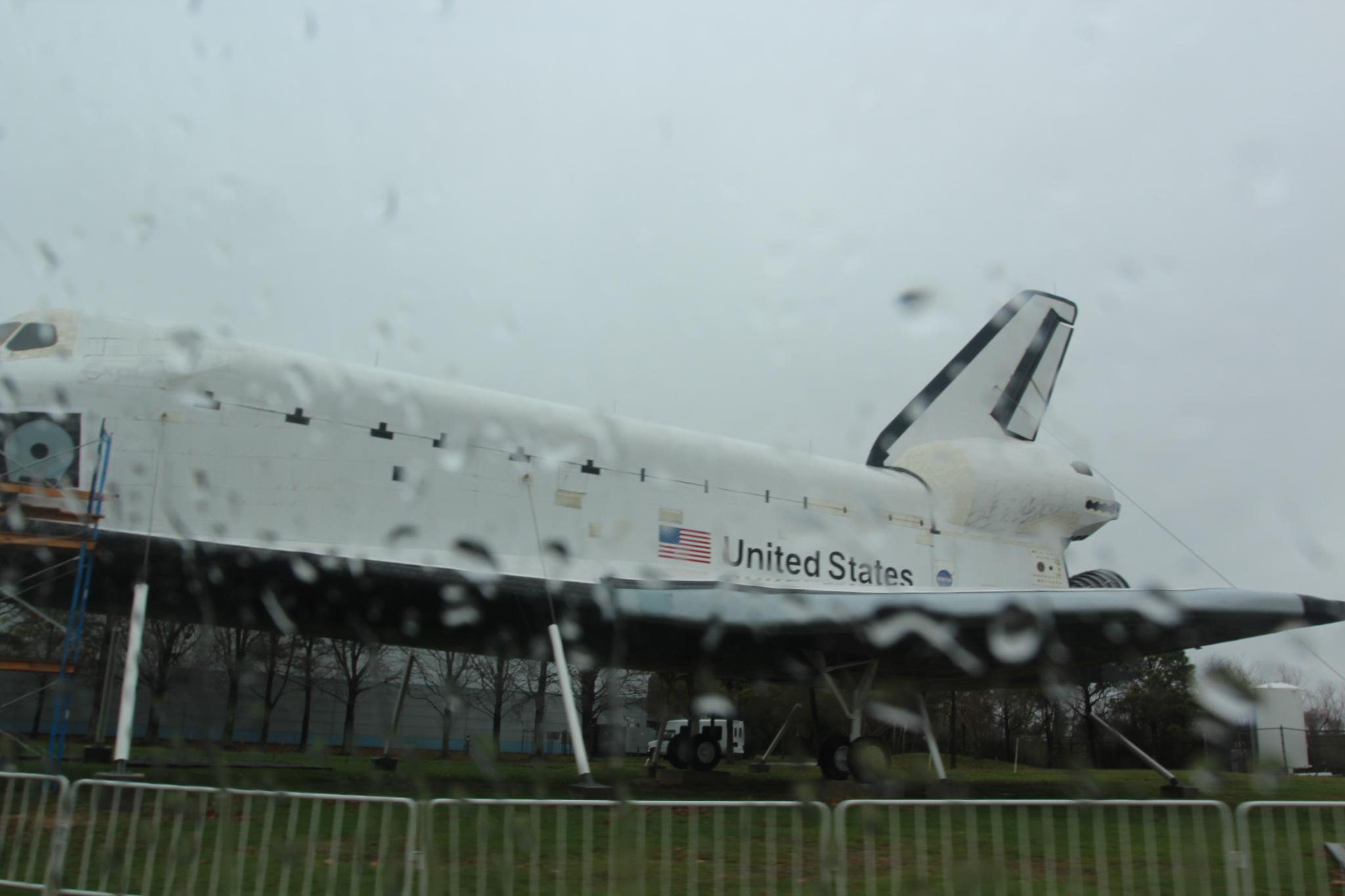 By the time we got the the Space Center, rain was already coming down persistently. Right as you enter the parking lot, you can see a space shuttle right on the lawn. It is actually not a real orbiter but a full size mockup. The folks at Johnson Space Center tried pretty hard to procure one of the real shuttles after its retirement but apparently failed to come up with a higher bid than the folks in Los Angeles. 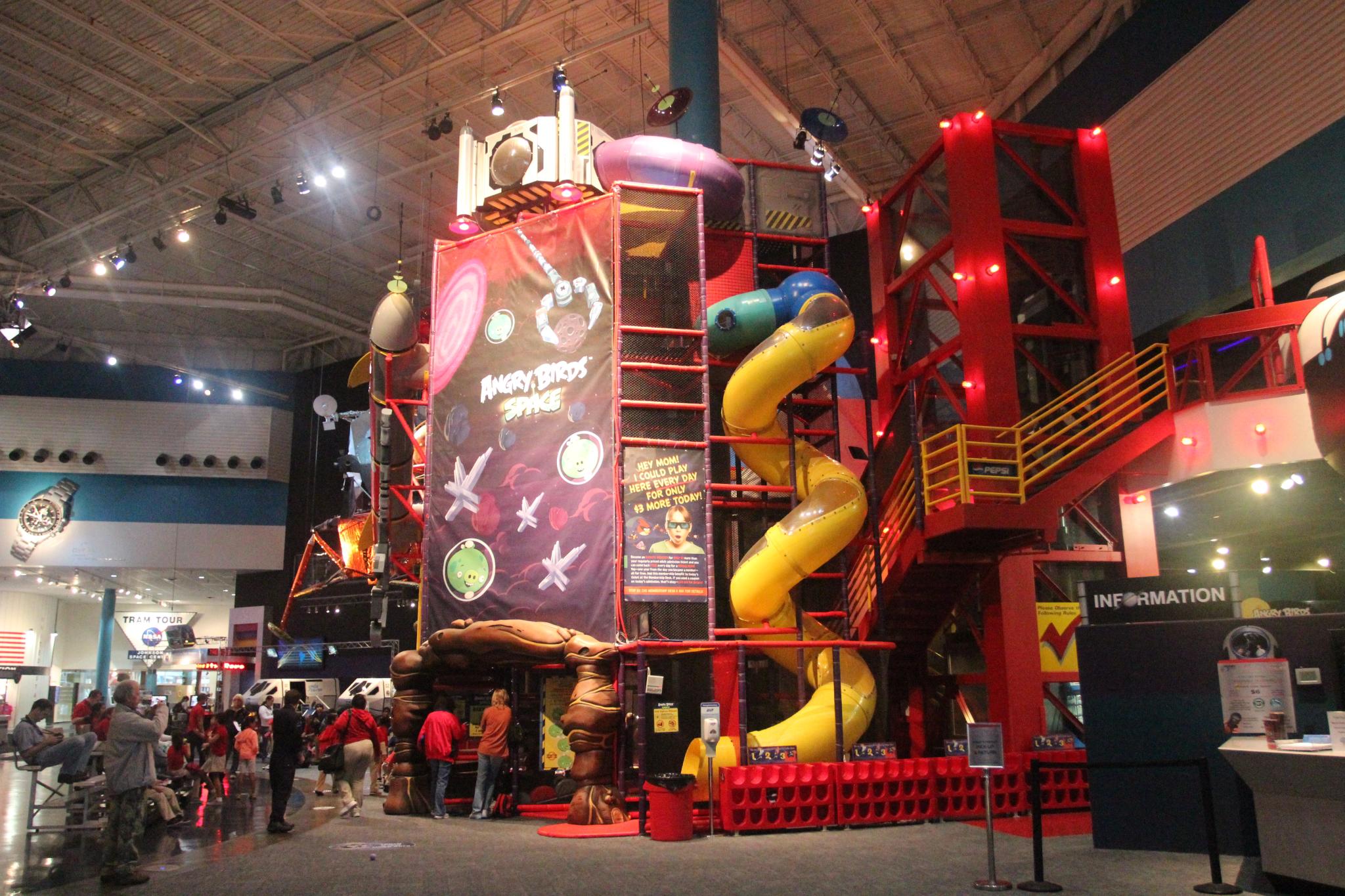 For some reason, the geniuses at Angry Birds got the folks at Johnson Space Center to agree to a giant  playground for the kids themed after their blockbuster video game. How exactly it fits into space exploration is a little beyond me but the kids loved it. 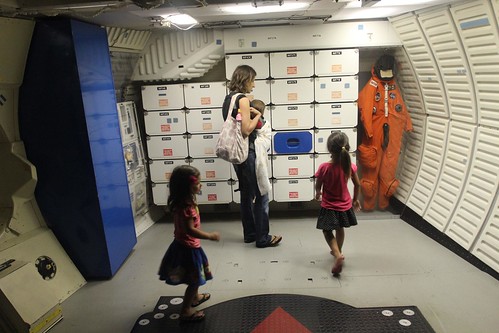 Most of the exhibits in Johnson Space Center are surprisingly outdated. I expected a lot more than what was there. After all, this is the command center of almost all of the space missions. 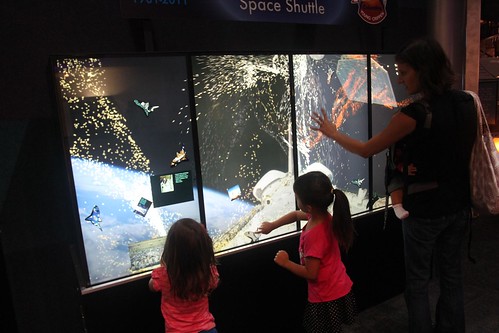 This little touch screen display was interesting. When you touch the screen, sparks appear and you can drag and flick objects across the screen. I am not sure the educational value of this but it was at least fun to do. 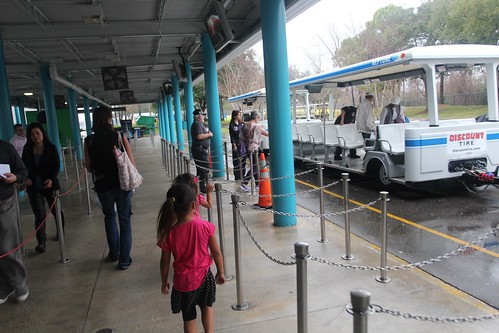 The main attraction of this place however is a tour of the Space Center grounds. It is a 45 minute shuttle ride with a handful of stops inside the grounds of where the actual rocket sciencing actually happens. Even though it was raining, the show, as they say, must go on. 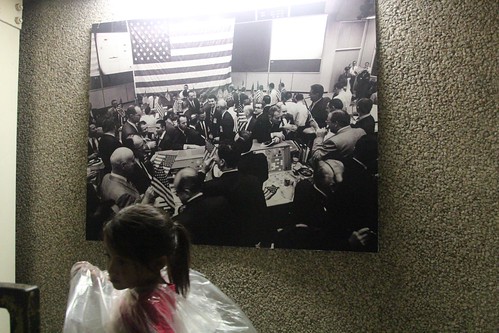 For a dollar, the tour guides sold us ‘ponchos’ to prevent us from getting too wet. I think we were sold trash bags with a hole on top. 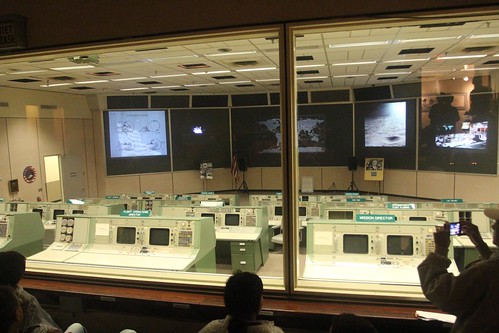 One of the first stops of the tour takes us up several flights of stairs to oversee this historic mission control room. All of the Apollo missions were controlled from here as well as several early shuttle missions. All of the computing power combined in this room does not even come close to what we are carrying around in our pockets today in the form of modern smartphones. 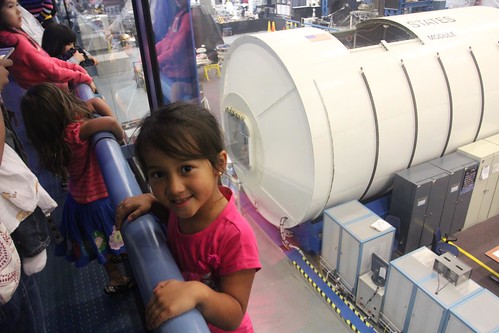 Our next stop took us to an observation hall way overlooking some of the more modern technologies in the space business. It is here where much of the equipment used in the shuttle missions as well as the current space station missions are tested. There were several full-size mockups of sections of the International Space Station full of equipment. 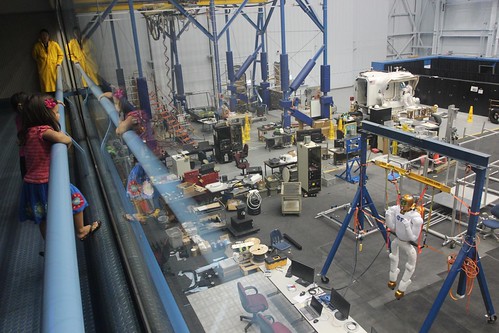 And humanoid robots too. 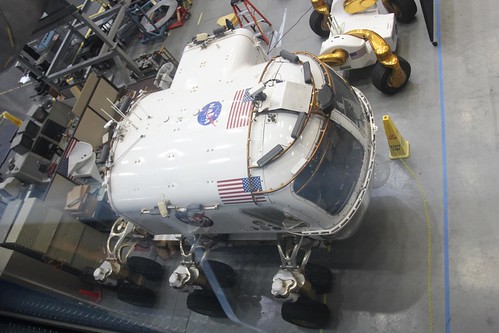 I am assuming these are lunar exploration vehicles of some type that never got to see action. It looks like NASA took a little inspiration from Airstream on the design of this one. 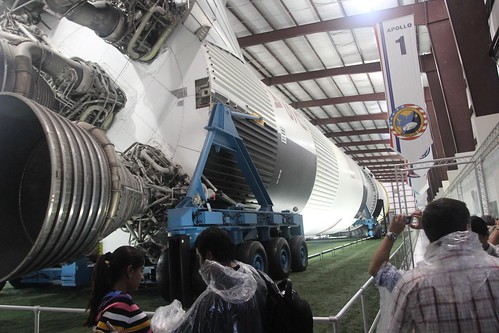 The last stop of the tour took us face to face with a real-life Saturn V rocket. There is nothing quite like seeing this beast in person. All of the videos you have seen on TV don’t do them justice as to how impressive they look in person. 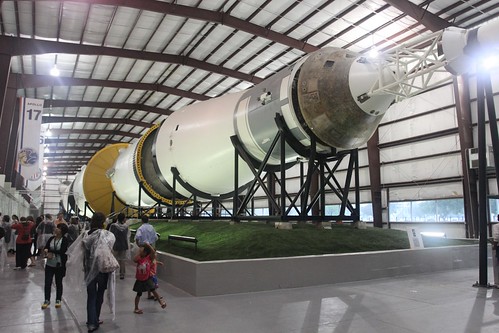 It took some real courage to strap on one of these suckers under your seat as you sit at the top of this monstrous rocket full of combustible fuel as it propels you against the earth’s gravity into outer space. 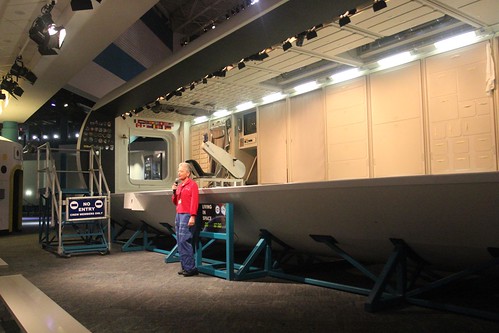 We got back just in time for the start of a ‘Life in Space’ demonstration. It was mildly entertaining with a fair amount of space potty humor involved with the help of a volunteer from the audience. 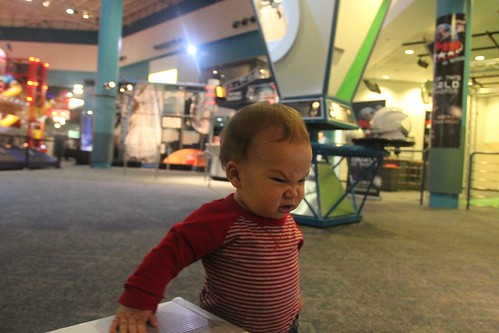 Luka is still thinking about all of the havoc he is going to cause once he gets his hands back on that toilet paper roll in the Mish. 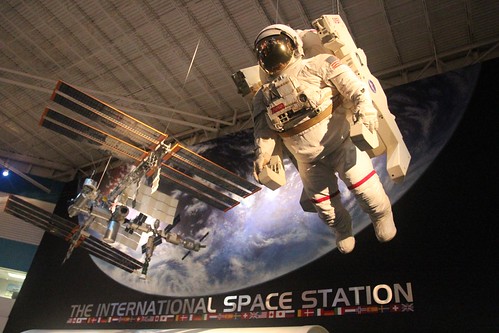 Thank you Johnson Space Center for sheltering us on this raining day. 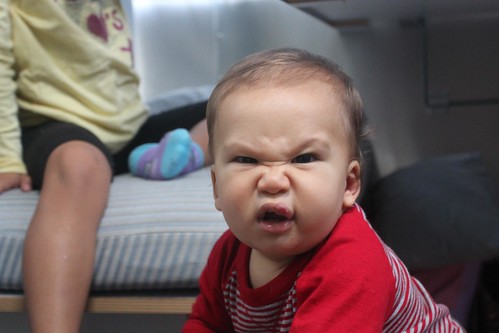 Now we have to deal with this little Angry Bird back at the Mish. 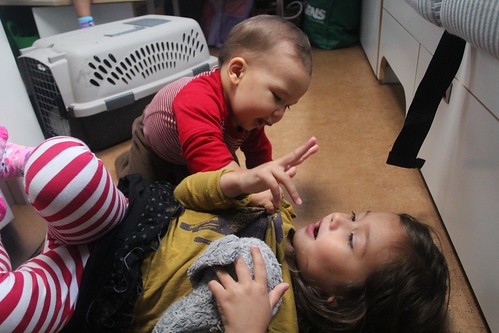 Watch out Mila! Luka is gonna get you! 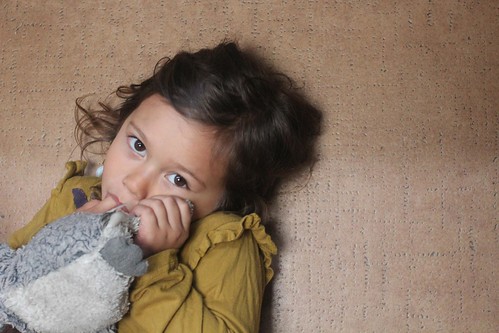 While Luka is still going strong, the girls are starting to look a little pooped from a long day of space exploration. Tonight we will head west towards Austin.

Looking forward to your post when your family is in Austin. They say its quite nice.