Our first Anza Borrego trip started out as everything we expected. The cool, dry air, expansive desert scenery, bright starry nights were everything we wished for and then some. 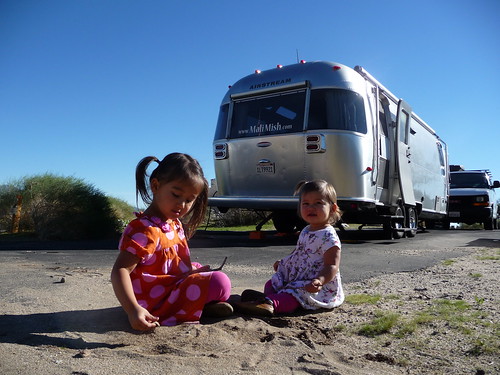 Ava and Mila especially enjoyed being in a giant sand box to drop and dig whenever and where ever . For example here, right in the path of oncoming traffic.

On the second day there we actually drove in to Palm Springs as a friend of ours was visiting some of his family in the area. We had agreed to meeting up there but I didn’t expect it to be as far as away as we were. It took about 75 minutes to drive out of the State Park and into town. 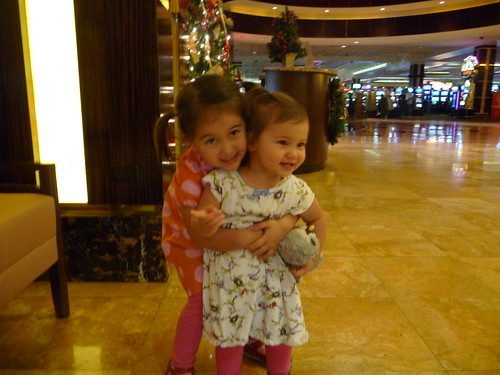 Having drove all the way out, we didn’t waste the opportunity by getting in on some more casino buffet action at the Agua Caliente Casino and Resort. 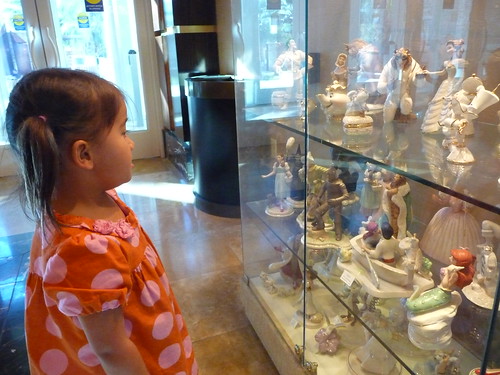 They even had a glass cabinet full of Disney figurines for Ava to drool over in the midst of her food coma.

On the way back from Palm Springs, I had started to notice that one of my tires was sitting a little low. It showed a noticeable belly at the bottom of the tire which gave me a sneaking suspicion that I might have a slow leak.

Unfortunately for us, the rain that we thought we had escaped from has followed us here. Although not a torrential down pour like we had back in Ventura, it was enough to be a nuisance while I worked on getting the full-size spare tire on. Surely after the old tire came off, I noticed a nail in between the treads. The tires on the van were the original factory ones that had lasted well over 40k miles. There are still some life left in them but with one of them out of commission, I think they are going to all have to go in the not too distant future. 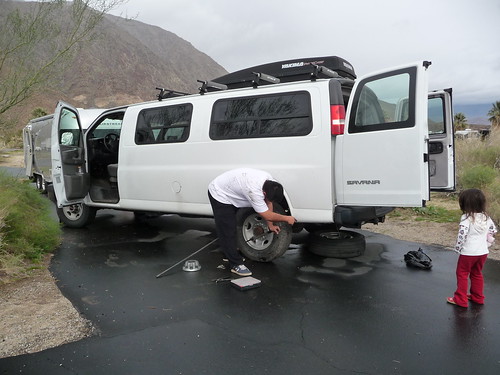 The rain came in and out throughout the day which made it difficult for us to plan any outdoor activities. Even though it was a little wet, it was not terribly cold for this time of year. The weather is suppose to cool down to below freezing in the evenings but for now, we are just dealing with a little bit of pesky rain. 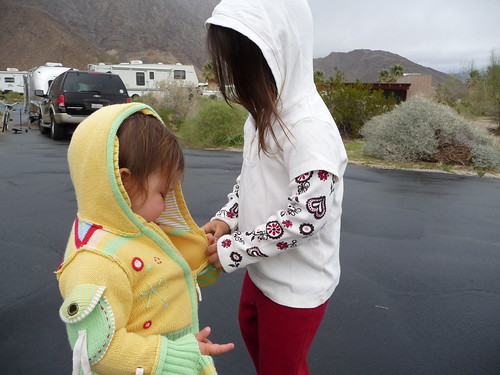 One of the cool things about having off and on rain with periodic peek-a-boo sunlight in between are the rainbows. Especially out in the desert, the rainbows seen to stretch across the entire sky. 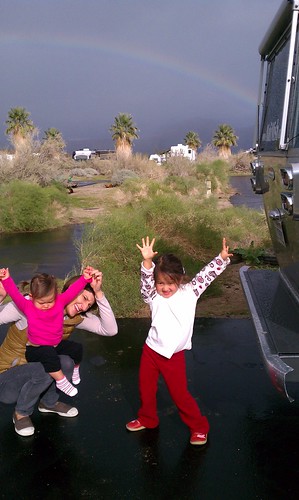 Check out the girls excited while posing for a desert rainbow photo. I had not noticed until in these last few months but every time Ava poses for a photo, she instinctively kicks her hip out to one side. And I haven’t even allowed her to watch Hannah Montana. 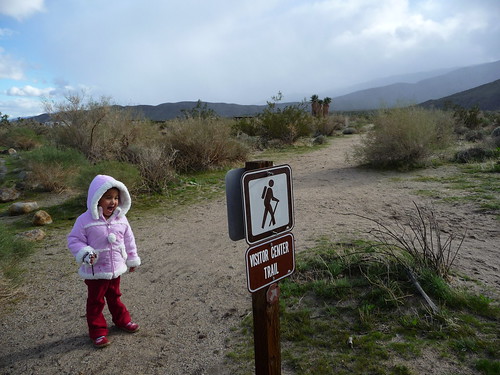 During the various breaks in the rain, we tried to squeeze in some activities. Like going on the 1 mile hike to the visitor center. That was cut short with a sudden rain surge with us running back for cover. 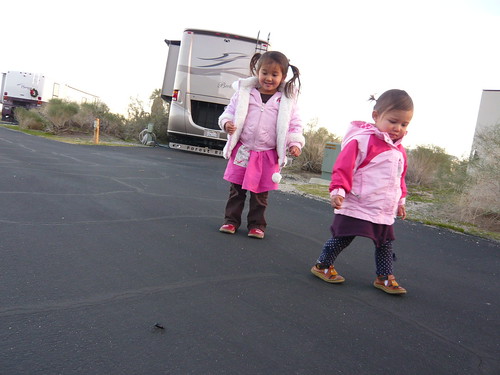 While other less ambitious trips took us around the newly paved campground when Ava and Mila had their first pinacate beetle (aka stinkbug) encounter. Ava thought it was cool that he was so shiny and said that his back was made out of ‘plastic’. 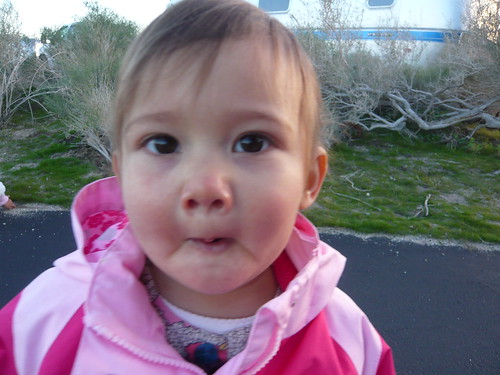 Mila didn’t know what to think. Why is this thing crawling on the ground? Is it a toy? Should I try putting it in my mouth? Well, Mila, no and no. 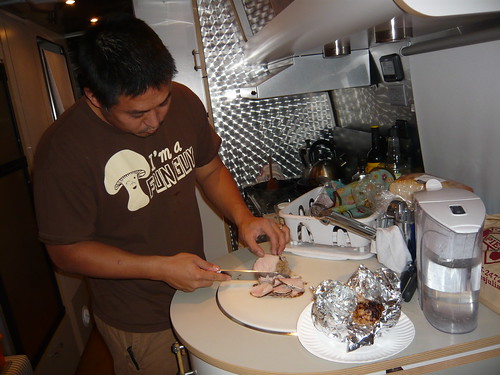 What you can eat is this pork tenderloin that I have been waiting to eat with some creamy horseradish. 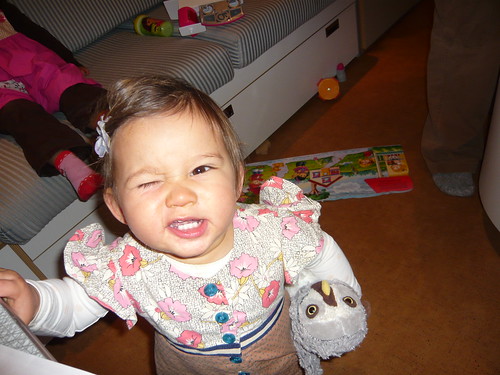 Oops, I guess I should have warned her that horseradish might sting a little bit. Don’t worry about her, she’s a tough little cookie. 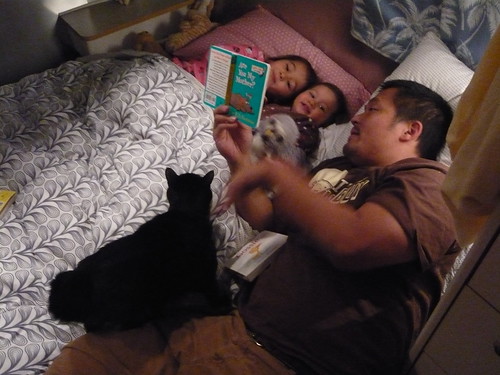 And even cookies need to rest at the end of the day. Let’s hope the rain stops soon so we can make the trip over to the visitors center tomorrow.