During our last vacation to Las Vegas, we wanted to drive by the Circus Circus KOA that we have wanted to stay at ever since we started Airstreaming. Why didn’t we stay there you ask? Well, we didn’t bring the Ol’ Mish with us. We got two weeks worth of timeshare kindly provided by Marlene’s parents. 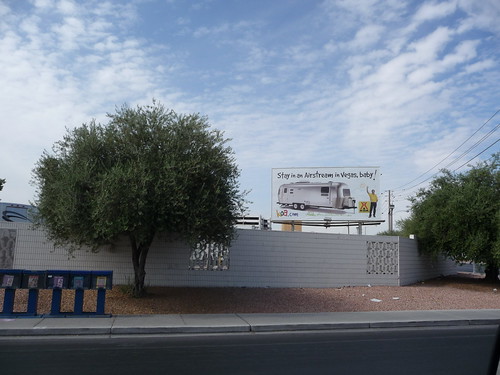 We didn’t know what to expect since we have heard that this was more or less a concrete parking lot with hookups right in the middle of the strip. Turns out it is pretty much at the end of the strip just north of all the action. It is still very walk-able to many of the casinos in the north end of Las Vegas Blvd.

We heard earlier this year that Airstream was teaming up with KOA to bring rentals on-site to their campers. It was only going to available at limited locations and Las Vegas was going to be one of them. We had been in Vegas and away from Mali Mish for around 10 days so we couldn’t wait to get a little sight for our sore Airstream eyes. 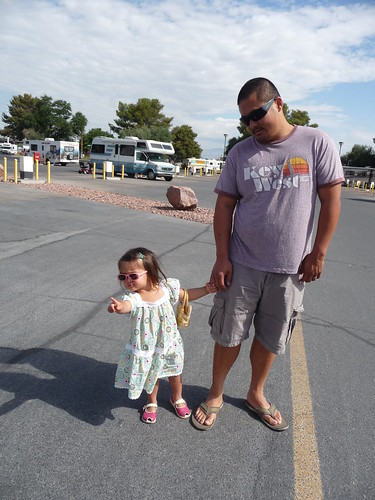 Apparently the Las Vegas KOA was furnished with a few 27 foot Flying Clouds in the same floor plan as our International Ocean Breeze. Although ours is only 25 ft, it is like the 27 ft minus the extra storage, microwave and a bed that runs length-wise instead of width-wise. The Flying Cloud is the new model that replaced all of the Safari line that was in production in the last few years. The name is a legacy that dates back to one of the original models from the early days of Airstreams. Simply by seeing the location of the windows from the outside, we could tell that this was the same ‘Front Bedroom’ floor plan which has worked out very well for us.

All of them were equipped with a couple of yellow Adirondack chairs and a propane BBQ grill on a outdoor rug right outside of the door. It didn’t seem like any of them were occupied the day we were there and probably because it was in the middle of the week.  Unless whoever was locked up in there was using it as their personal sauna with all the windows locked and no AC running. 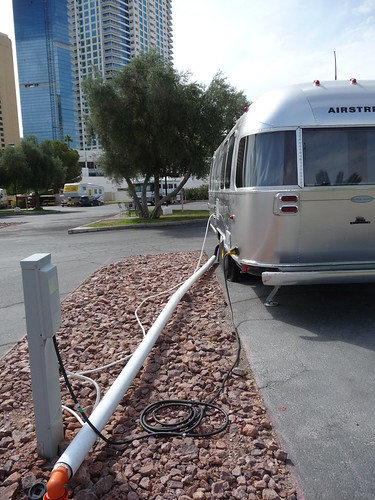 KOA has all of them permanently hooked up and was basically using them instead of the log cabins as seen in some of the other locations. To get into one of these, it will costs you about $110 a night. KOA ran a special at the start of the program for around 30 bucks a night but that has long gone. The price might sound steep but it is still one of the cheapest ways to spend a night in a new Airstream if one is in your future. 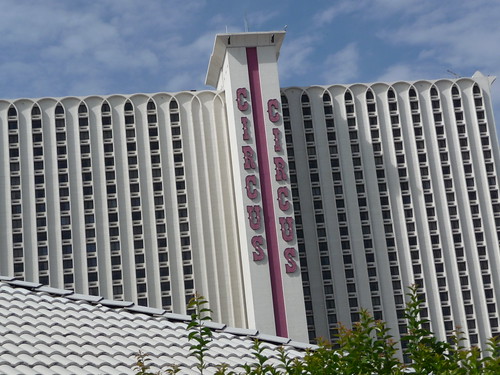 Just to the south of the massive parking lot they call a campground is a towering 1970’s vintage concrete casino named after red and white big top tent. The irony was not lost at all on us. 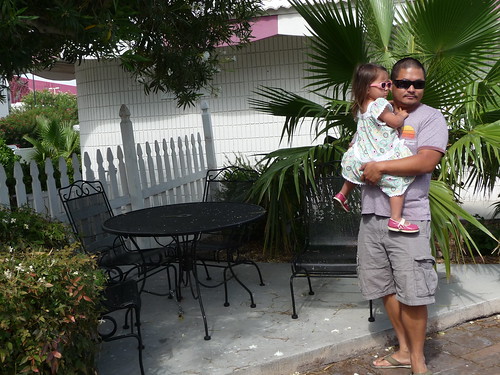 Here’s Ava enjoying the last few months of her not having to share her Dada with anyone else. 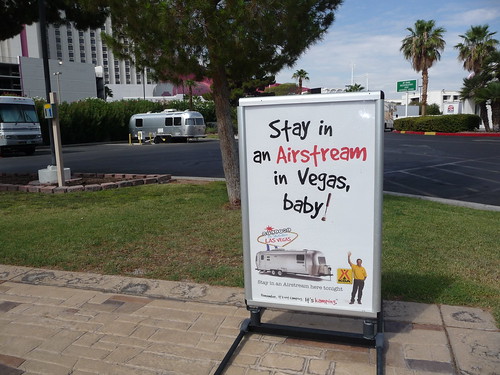 Baby? Did someone say baby? 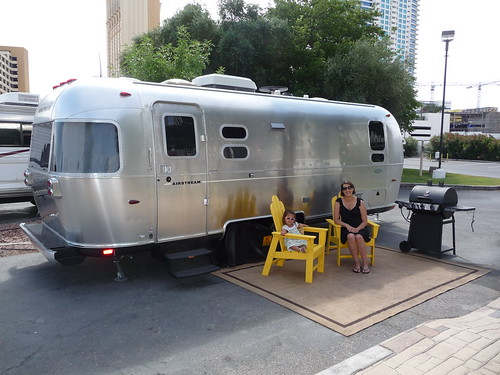 If you can’t tell since black is so slimming, Marlene here is about 6 months pregnant here with Mila (whom at the time was just an unnamed baby with an unknown gender). This trip was kind of her ‘babymoon’. Here Ava and Mama give their stamps of approval on the Adirondacks. 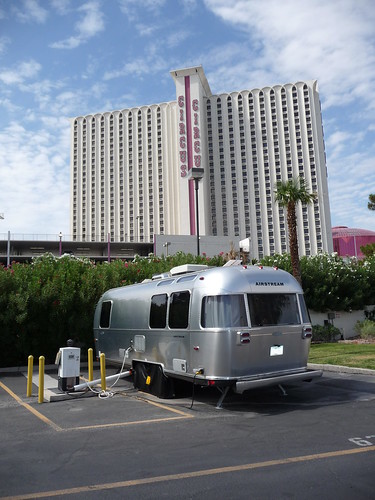 Another one of the Flying Clouds in its new Las Vegas digs. Someone might have been in this one since the shades were open and the roof vents were up.

The Las Vegas KOA has a pretty large reception/general store area as most of them have. We stepped in there for a couple minutes for a nice deserved AC break as it was pretty much high noon in the early Nevada summer. Not for long though because Ava spotted a shaded play area for kids right next to it. 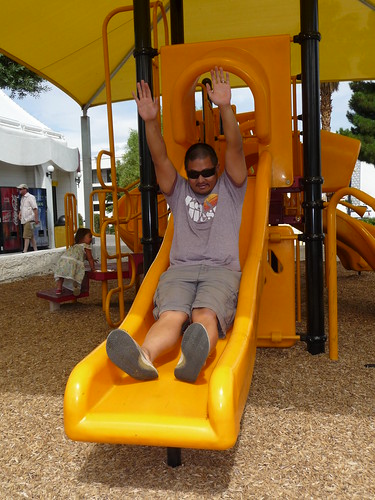 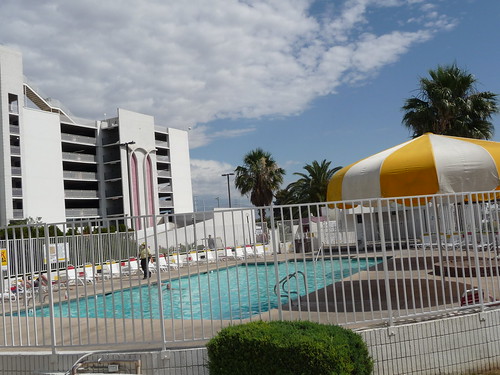 As in most places you might consider staying at in Las Vegas, a swimming pool is a must. This is not the fanciest pool we’ve every seen in Las Vegas by any means but a decent size one with a good amount of lounging area all around. Since this was early in the summer as well as being in the middle of the week, hardly anyone was there.

KOA also realizes that many RV travelers like to bring their pets on the road with them. We no longer have our dog Rudy but we do bring out cat Yoda with us on extended trips. She probably wouldn’t make much use of the Pet Playground but I am sure it is a welcome feature for many canine loving road trippers. 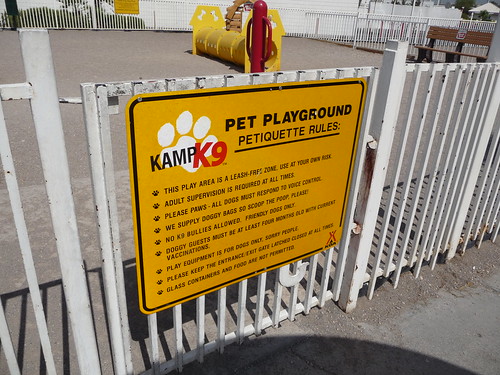 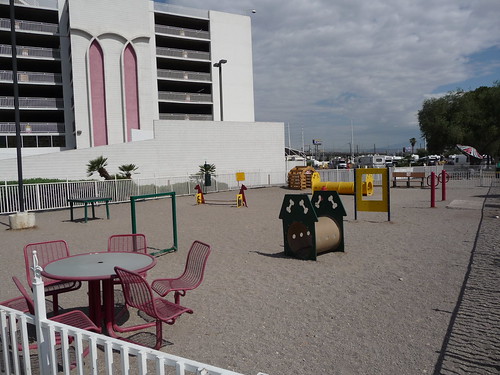 The Las Vegas KOA might be on one of the most expensive pieces of property in all of the KOAs real estate portfolio. For as much as land sells for on the Las Vegas strip, this has to be one of the best bargains around town second probably only to the late night prime rib sandwich at Imperial Palace. We will definitely be coming back here soon and you can bet that our little silver mouse will be in tow on the next trip. 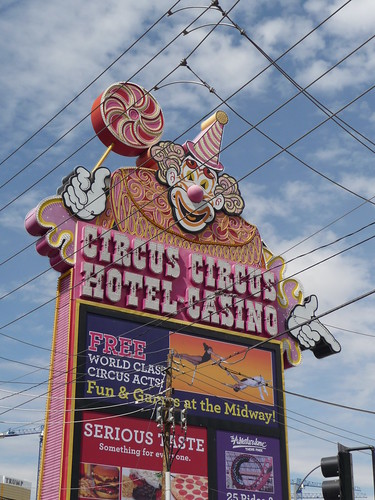 FYI, here are the 4 KOAs that offer Airstream rentals at time of posting: