Before our last mini trip to Malibu Creek State Park, a lot of people warned us of how scary the road was to get there. We had a flashback to our first little trip to Lake Isabella. Narrow, windy mountain roads with rock overhangs on one side and a cliff down to oblivion on the other. 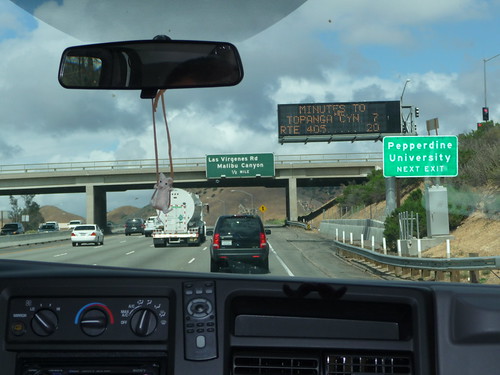 Well, that nightmare did not materialize. In fact, the trip there was as uneventful as one could imagine. A short drive up the 101 where most of the way was a 6-lane freeway with just the last 5 miles or so a straight 2 lane highway. I think the fact that we did not come from the ocean side of Malibu was the difference. Las Virgenes Road goes all the way through to PCH (Pacific Coast Highway, AKA California Highway 1) and it dumps you off right next to Pepperdine University. I am guessing driving a big RV thru the road to there would not be too pleasant.

When I booked the site from ReserveAmerica, I noticed that Malibu Creek State Park has no hookup sites. No big deal, I thought. We just got our Honda generator and for 2 nights, our water tanks are more than enough to get us through. What was a problem was it only allowed RVs and trailers up to 24 ft. Mali Mish is 25 ft. I went ahead and reserved it and kept my fingers crossed. 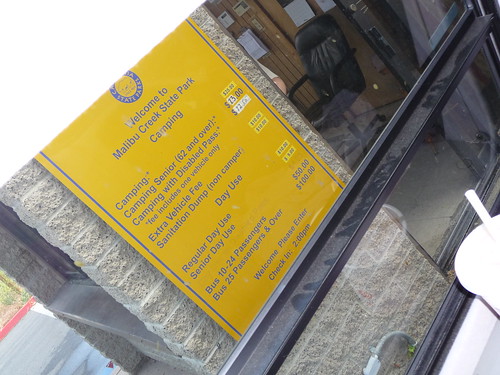 As we entered the gate to the park, which is literally minutes away from one of the busiest metropolitan areas in the world, we could not believe that this place was so close yet we never knew that it existed. Since the day was a bit overcast with big puffy clouds floating in the sky right around the height of the mountain ridges, it reminded us of our honeymoon trip to Moorea Island in Tahiti. Of course, it was missing a few ancient volcanic islands and statues of tiki gods so we got right back to reality and into dealing with the issue at hand: Are they gonna let us in with a 25 ft trailer?

The answer was an “I guess so”. Actually the ranger at the gate did not mention a thing about the size. All that sweating into the cloth interior of my high-back captain’s chair was for nothing. We are now on our own to squeeze an extra foot into parking space meant for a tent camping site.

Ava was pretty excited to get this hand drawn map of the campgrounds because her favorite cartoon character, Dora the Explorer, always kept one in her backpack.

There were a lot of day use areas in the park since many LA residents like to come here to hike, ride or have a nice picnic just for the day. The overnight spaces were all the way around the back of the park so we drove around and found a tight little spot in which I had to maneuver the rig into.

I was able to back the trailer in pretty much one try, even with the narrow path and large boulders on each corner. The bigger issue was that all of the sites have some type of incline one way or another. 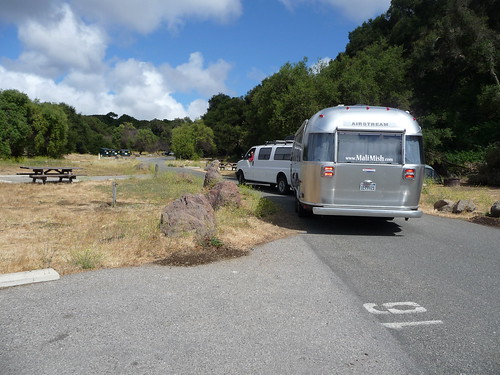 With the Airstream completely against the curb stop at the end of the site, I had to figure out a way to level it. In the past, we have just simply carried some scrap 2x4s and nothing was bad enough to need more than 1 block of wood to level it side to side. 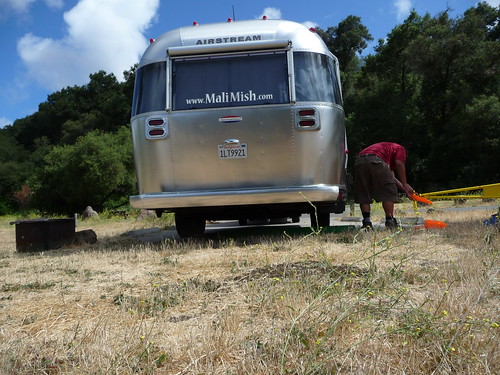 This spot on the other hand was much worse than we have had in the past. The biggest problem with having the trailer lean to one side is the fact that our bed runs thru the width of the trailer rather than the length. That means if we couldn’t jack up the starboard side (that is the right side for all you non-nautically literate folks) up high enough, all the blood would rush into our heads as we slept at night. And that is not a pleasant feeling. Of course all these complaints were at the expense of everyone who is sleeping in tents around us. I know, Wah! Wah!

Luckily for me, just a couple weeks before the trip, I decided to splurge and get some legitimate leveling blocks for the Airstream. Out were the 2x4s and in come the over-sized orange LEGOs. 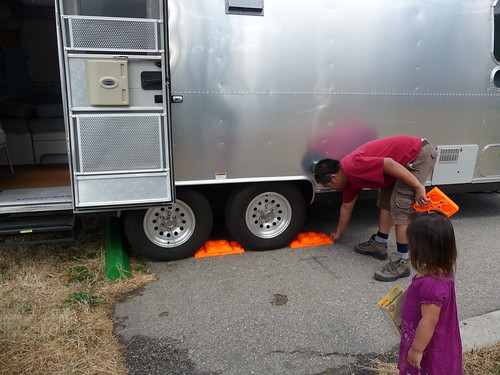 We needed them to be stacked 4 high to get the leveling just right but unfortunately it only came with 10 pieces.  Plus there really wasn’t enough room between the 2 axles to build up to 4 levels for the front tire and doing what is shown below in the photo just made the Airstream push the orange blocks along the asphalt instead of rolling over on top. 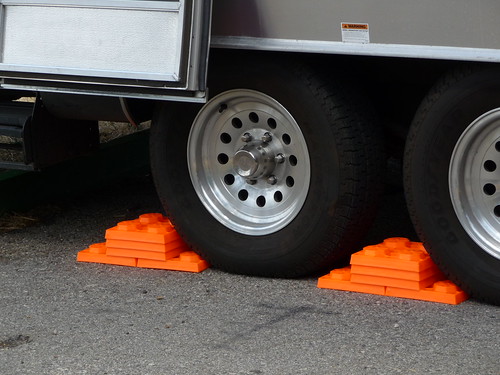 We settled with 3 blocks and although it was still slightly off to starboard (are you starting to get a hang of this, sailor?), it was going to have to be good enough. After all, we will have our heater to last through the night while our neighbors are sleeping in their hoodies and gloves. 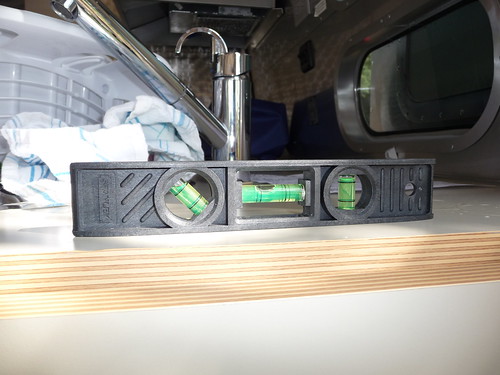 Part of having to level the trailer also means that we are not going be able to use our rubber wheel chocks to block the tires off. The last thing you’d want in the middle of the night is to have the trailer roll off of these blocks and into the van. Well, it would suck during the day too, I suppose.

During my trailer shopping spree, I also had enough foresight (pat, pat on my own back) to get a set of these wheel stops to solve just that problem. A little turn of the bolt locks the tires against each other and now we can sleepy soundly at night. Did I mentioned that we have a heater? 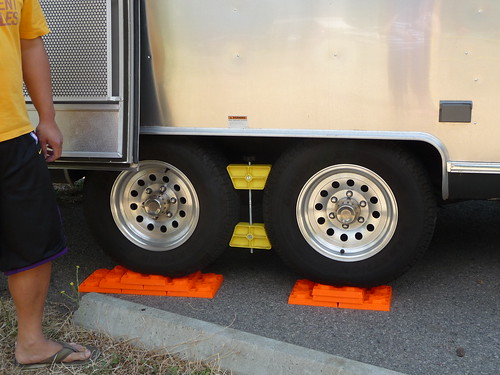 Well, time to do some exploring with Dora and her map. Here are some shots of the Tahitian puffy clouds for your viewing pleasure. 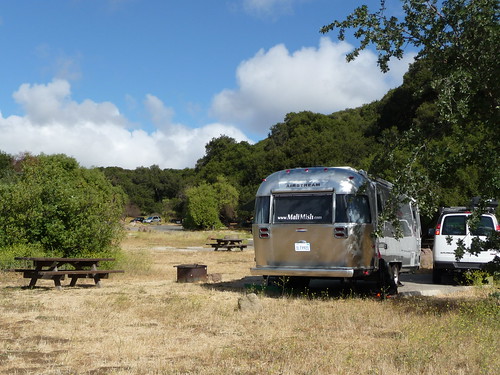 I hope you went far enough to see the M*A*S*H set. Even though there isn’t much to see aside from the Jeep and Ambulance rotting away.

Hi…I have a blog myself where I review different campgrounds we’ve been to since our camping lifestyle began. We’ve been to Malibu Creek once way back when we first began camping in a little 18 footer. Now we are in a 35footer class A, and so we will not fit there. Wondering if you would be willing to let me use your last picture of your Airstream on my blog to compliment my write up. Feel free to check out the artcile first if you wish.
Thanks for your consideration,
Michelle

[…] finally getting the upper hand on our unlevel site at Malibu Creek State Park, we got to sit back and enjoy the beautiful view from our […]