Last week we were graciously approached by a fellow Airstreamer from our home town to tag along with them and some others in the area on a trip to a local beach for the weekend. We were at the right place at the right time to get in on this trip as it had been planned for some time and one of the campers dropped out in the last moment with a non-refundable fee which we were happy to fill in for them.

Thornhill Broome State Beach is a stretch of beach along side highway 1 just south of Point Mugu Naval Base and north of Malibu. It is a beautiful stretch of beach with the Santa Monica mountains just to the north of it. Much of California Highway 1 around this area actually goes more east to west than north to south because of the angle of the coast.

We live just over 20 miles from this place but surprisingly we have never camped here. That is actually true for many of the local campgrounds. Maybe we are more into traveling to and seeing new places rather than just going camping for the sake of sleeping in the trailer. The Airstream is just a convenient mobile hotel room we get to drag around with us.

Lucky for us, we got to meet some great new Airstreamers on this trip that made it all worthwhile. Some have owned multiple Airstreams and others are like us who are on their first silver bullet. There were a total of 5 Airstreams lined up in a row at our part of the campground.

Starting from the right of the panoramic photo above, Dennis and Cindy with their daughter Madison hail from Los Olivos, CA near the wine country made famous by the movie Sideways. Their trailer is an Airstream International Ocean Breeze 25 SS (six sleeper). It is a 2007 just like ours with the only difference being the layout of the interior. Our trailer is an Ocean Breeze also but it is the FB (front bedroom) model. To the left of us we have David, Ari, Willie and their pup Oreo who camp in a very rare and desirable Airstream 28 Safari with a slide-out dinette. The are also from our home town of Ventura, CA and we have known about them since our visit with the Luhrs of Airstream Life in Tucson, AZ. Rich Luhr from Airstream Life had mentioned that they knew of another family from Ventura who they have gone on many trip with. Just recently they had been camping together at Anza-Borrego in the California desert. David and Ari also are the proud owners of a polished 1962 Airstream Globetrotter which is at the far left of the panoramic photo that they generously brought out on this trip for their friend Dan and his 3 children from Goleta, CA to camp in. Between David and Ari’s Airstreams is Eric, Chris and their 2 kids from Santa Clarita, CA. They are proudly represented by their beautiful Airstream Safari Special Edition 25 also in a Six Sleeper floor plan.

This is the first time we have ever camped with other Airstreamers. It is not going to the the last time as we have plans to join the Browski’s in Newport Beach at the ‘Families On the Road’ rally in about a month. It is definitely a different experience and it was a refreshing change from the other trips we have been on. We tend to spend a lot of time either inside the trailer or out and about exploring the town we are visiting. This time we got to enjoy the campground a lot more and best of all, being with so many others in the Airstream community allowed us to exchange ideas, tips and tricks we have all come up with to make the mobile life easier.

Did I mention that we are dry camping? That’s right. We are wusses. We have so far limited our dry camping / boondocking experiences to only 1 night at a time. Most of the time in a parking lot the night before checking into a hook up campground. We are not yet setup to be able to go on extended boondocking trips without at least upgrading our house batteries to larger capacities. We did do our best to conserve by not running those battery killing halogen puck lights Airstream decided to install everywhere in the trailer. We did squeak out all 2 nights at the camp site thanks to the abnormally warm, mid 70s degree weather that saved us from having to use the furnace blower at night. 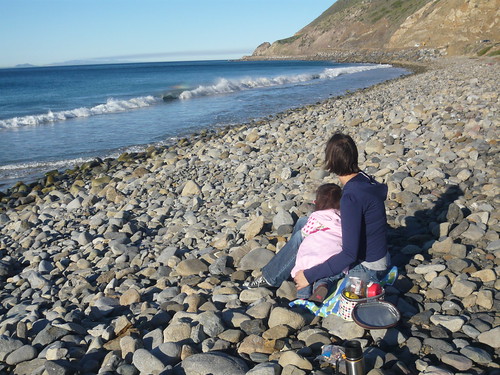 The Pacific ocean was just steps away from our camp site. On this end of the campground the shores are lined with large pebbles that makes beach frolicking a little more difficult. 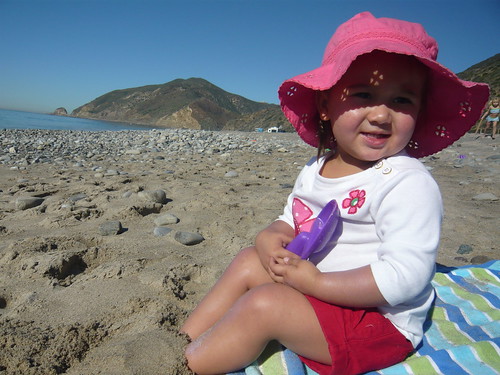 To get to a sand beach, we had to trek to the other end of the campground. Ava was loving the sunny and warm weather and got right away into shoveling sand and burying her own feet in it.

There were a lot of other kids there in our group but Ava was by far the youngest one there. Being in a shy phase of her 2 year old life, she didn’t get to mingle with the other kids much. 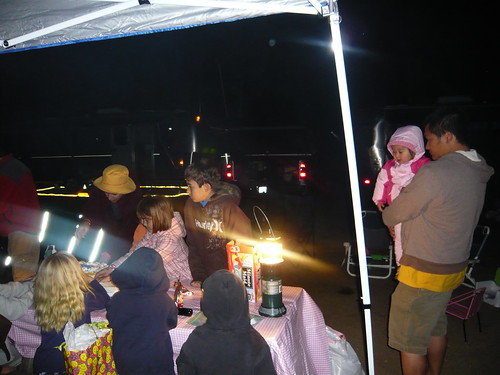 Even when she eventually warmed up to making some new friends, she was just too little to get in on the action. Luckily, our good friends Justin and Isabella came for a little visit with their boys Matheus and Gabriel. 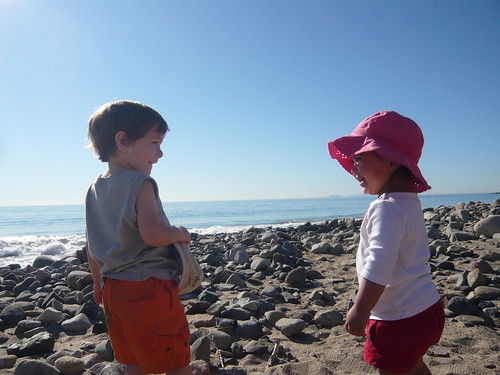 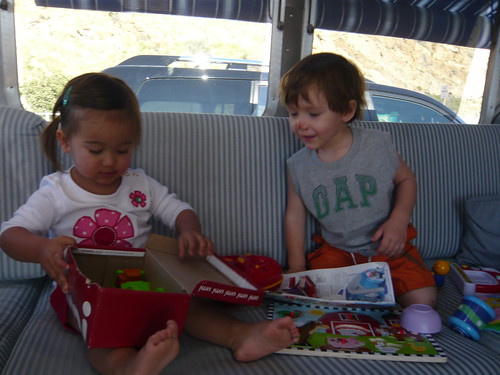 Ava was glad to pull out her box of toys we stashed in the Airstream to share with Matheus during their visit. He took a little spill at day care the other day that gave him a little road rash on the tip of his nose. I guess that’s what boys do. 🙂 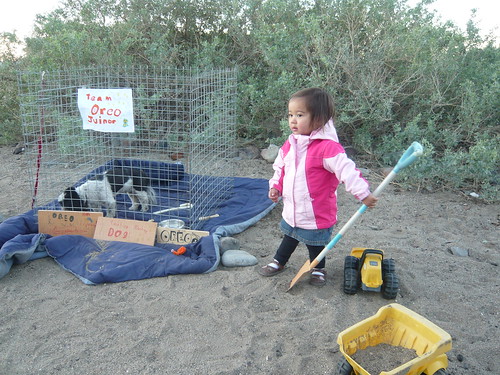 Ava also loved having the dogs our new friends brought with them. Looks like she was trying to dig a tunnel with her shovel for Oreo to escape from his playpen so they can go skipping down to the beach.

Since we had Monday off of work we considered staying another night but on Sunday the Santa Ana winds picked up and we were running low on juice so we headed down to Heart Attack Hill for a little exercise before heading back home.

Yeah, she loves her dadda. And dadda needs a hair cut. 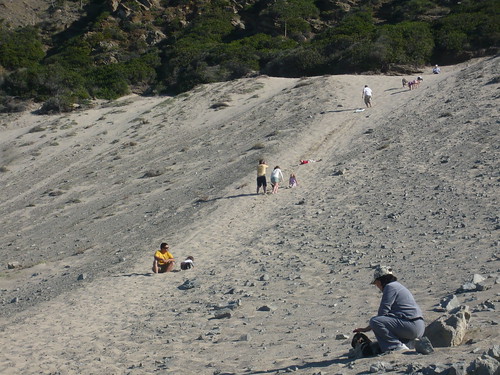 Heart Attack Hill is probably named after guys like me after they tried to climb to the top of it. Luck for me, Ava’s enthusiasm faded well before we got anywhere near the top. The hill is just to the side of Highway 1 that runs along the coast and the view was beautiful from the top. I couldn’t tell you for sure but that’s what the others told me. 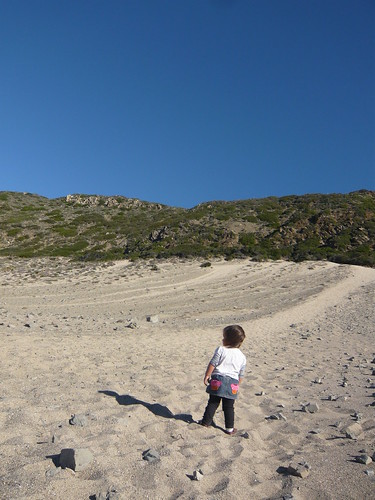 Next time Ava. Next time dadda will take you to the top.

The heater blower will kill the batteries very quickly. I am considering putting in a catalytic heater, like Rich L did, to help save in that consumption.

I saw your Flickr picture about running your A/C on a generator. Generators are very nice. I looked at the Yamaha 2400 and the Honda 3000. However we went with dual Honda EU2000i’s. We can still do the A/C with them running with the parallel capability. While two units is more maintenance they are more manageable. I knew that I would get real tired of lifting a big single generator in and out of the truck, but asking my wife to help would not even last that long! Plus we can run just one if we need a recharge, want to run the TV or microwave.

I got to try a Yamaha 2400 this last weekend and it runs the AC quite well. I am also thinking about doing with 2 Honda generators instead. But I have a slightly different setup in mind.

I am considering going with one EU2000i and another EU1000i. Supposedly they daisy chain together just fine and 3000 watts is plenty for running AC and/or microwave. I like the idea of having the little 1000 watter to pickup and take with me on smaller trips.

Research that out fully. The reason you need the extra amperage is not the running of the A/C, it is the initial kick that is needed to get the compressor going. Once it is moving it is not as bad.

I ran a test with both my generators and turned on the A/C. When the fan was just going, I could not tell the difference in how they sounded. HOWEVER when the compressor kicked in you could definitely hear it in both generators to the point that I thought they might shut off. It may have something to do that I was running them in Eco mode and it had to get out of that. With the compressor going, you could hear a load on them but nothing near the initial hit. Check the experts at AirForums.

I have an item for my A/C that I have not put in yet. It is a ‘hard start’ kit. Essentially a bigger capacitor that charges up before kicking in the compressor. It supposedly lessens the amount of voltage/amperage to start the compressor. It just scares me to change capacitors, oh well one of these days.

Roger, I had some discussions on Airforums and have found a lot of ‘paper experts’ there. Although there are a few that were very knowledgeable with some hands-on experience of the EU series generators. Where I actually found the most useful information is through rv.net where lots of folks have successfully paralleled unmatched EU generators together to run their AC unit. If you are interested in reading these discussions, take a look here.