WiFi hot spots are one way for a road tripper to get online. But there are obvious limitations with it as discussed in a previous post as part of this ongoing RV Web series. One of the more widely available broadband option is likely right inside your pocket as we speak. Your phone.

With today’s smartphones like the Apple iPhone, Palm Treo or Blackberry, many of the Web tasks can be easily and quickly done directly from the phone. Email, SMS, IM and even Web browsing are possible with some of the latest mobile browsers. One of the best features on today’s smartphones has to be mapping tools such as Google Maps.

When used in tandem with a turn-by-turn GPS unit in the vehicle, Google Maps for your smartphone operated by a co-pilot can be an extremely helpful tool in finding addresses, points-of-interest, traffic updates and getting satellite views of the terrain as the driver concentrates on the road ahead.

For some phones, you can even route the data connection from your phone via a cable to be used in a traditional notebook computer. This process is called tethering.

If your phone is compatible with tethering, make sure you have a data plan that can handle the large amounts of data you will be consuming. Otherwise, you will be looking at a big deal of hurt when you get your next bill. Also, most phone companies prohibit tethering in their terms of services with a data plan meant for the phone. So, as far as tethering for unauthorized phones and data plans, it is really a black art that should be left for the experienced.

To use a mobile phone network’s 3G capabilities legitimately, you should subscribe to a separate data plan that is meant to be used with a computer. AT&T, Sprint and Verizon all offer an unlimited data plan for $59.99 but since earlier this year (2008), all have decided, around the same time, that a maximum of 5 GB was going to be the limit with no pricing change. Collusion? You decide.

The hardware required to setup a cellular wireless broadband connection is relatively inexpensive and portable. All of the providers offer instant and mail-in rebates for the hardware that brings the price well below $100. That’s if you are willing to sign your life away on a 2-year contract. Collusion? OK, I’ll stop.

With only a 5 GB a month limit, you won’t be able to use your Internet connection as liberally as you would an unlimited connection like the DSL at your house. The usage breaks down to roughly 170 megabytes a day. That is plenty for sending/receiving email messages and casual Web browsing a few hours a day. If you are a YouTube addict or subscribe to podcasts via iTunes, you are out of luck. An average 10 minute video clip on YouTube will be about 7 to 10 megabytes in size. If you did nothing but watch 20 YouTube videos a day, and you know how easy it is to click from clip to clip before you realize hours have gone by, you will run out of your data limit for the day. For someone who requires even more data intensive services like Skype or iChat video chat, 5 GB a month will not get you very far either.

The monthly usage report uses both the downstream as well as the upstream to calculate the limit. That’s why a 2-way video conference that doubles the rate transfer rate will bring a considerable amount of hurt to your monthly bill.

Assuming that you are willing to deal with the data limits, the next thing you will want to consider is the coverage areas. The 3 largest mobile network operators in the U.S. are AT&T, Sprint and Verizon. Sprint and Verizon both utilize the EVDO network and both have recently updated to what they call a ‘Rev. A’ network. It nearly doubles the data rate and has great coverage across most major cities in the U.S. AT&T is relatively new to the 3G game having relied on the 2G ‘EDGE’ network for many years. Their recent launch of the 3G network is only limited to the largest markets and runs on the newer and theoretically faster HSDPA network. With all three of these network operators, you will automatically fall back to their older infrastructure with slower speeds if you are in an area where the newer 3G speeds are not available.

Although the coverage area is much better than open WiFi connections, it is not perfect. For a road tripper who likely will be traversing through miles of roads less traveled, an external antenna will help extend the reach of the cellular network. Even better, you can install a cellular booster kit to increase the range by as much as 50 miles.

There are companies that specialize in building these booster kits for the RV market such as WiFi In Motion out of Oregon. Wilson Electronics also sell wattage booster and antennas of all types to extend not only your wireless broadband connection but also your mobile phone so you can make calls and receive better data signals. Digital Antenna offers a repeater product that you can install into your vehicle that will pick up all of the cellular traffic inside the car with an internal patch antenna and boost the signal to 3 watts and sends it away to the nearest cell site.

We went to the Pomona RV Show earlier this year and were able to see the WiFi In Motion in action at their booth. Part of their kit includes a WiFi router that lets you turn your mobile broadband card to a WiFi signal you can share with multiple computers just like a hot spot. You can purchase a standalone router without the booster kit from various companies including Linksys and Netgear if that is all you need. One of my favorites is actually a company who specializes in wireless broadband routers named Cradlepoint.

They use a proprietary technology they developed called “WiPipe” that claims to squeeze out every last bit of speed from your broadband card. It is compatible with most if not all of the adapters offered by the wireless network providers. Many of their routers are designed also to be used by a land line DSL connection that will automatically fail over to your wireless broadband card in an event of land line failure when you are at home. Keep in mind that when you split your connection up amongst many users, you will have to be even more mindful of your monthly data limit.

The benefits of wireless broadband is obviously its pervasive coverage. The recent upgrades network operators made have increased its data rate on par with land line DSL or cable connections. Here are a short list of the benefits cellular wireless broadband have as compared against other options. Specifically WiFi Hotspots and Satellite Internet (Will discuss in a future post).

Although the services offered by these cellular providers are extremely convenient and fast when you are in a 3G network, the data transfer limitations are a deal breaker for me. As my work requires me to be online almost constantly, the 5 GB limit falls well short of my needs. The irony is that as speed and data capacity increases, the cost has not fallen. The 3G network is now at a point to be able to replace land line broadband with its comparable speed but all three of the phone companies who offer the service are concerned with it cannibalizing its core land line market. They do not want people to cancel their home DSL accounts just because they are a subscriber to their wireless broadband. That is a shame as many of us would love to do just that.

If you are looking to give wireless broadband a try yourself, nearly all of the providers have a risk-free, 30-day trial period where if you are not satisfied with their offering, you are not obligated to the term of the contract when canceled in time. That’s exactly what I did. I am holding out for an unlimited plan if it ever becomes available again. 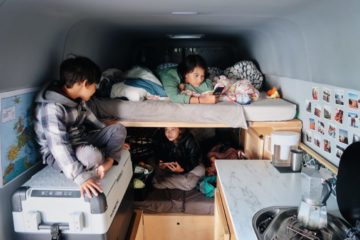 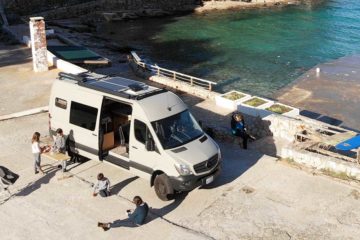 Building the Electrical System for Our Sprinter Van

One of the more complicated part of building a van for many people is choosing the right equipment for the electrical system. Selecting electrical components for your build can have long lasting impacts on how Read more… 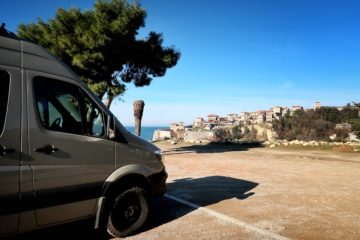 How We Shipped Our Van From US to Europe.

In September of 2018, we shipped our van from the US to Europe to order to continue our traveling adventure on a new continent. Here is how we did it, step by step. QUOTES Contacting Read more…