We decided to stay an extra night here at Wilson’s Riverfront RV Park so we could spend another day in Asheville yesterday. Our intention during this trip is to stay longer at every place but it just hasn’t really worked out that way. On the flip side of it, we have been really blessed to have met and gotten to know a lot more people than we anticipated. If and when the social engagements start to dissipate, we will try to focus more of our time at the destinations. 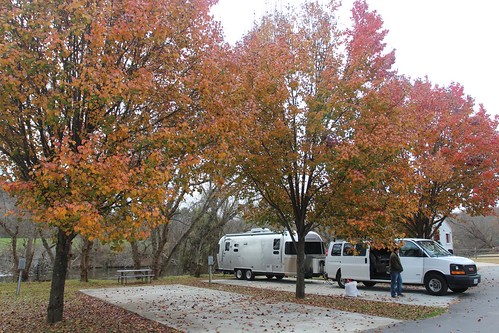 Speaking of social engagements, we are headed south to a little town in the mountains on the border of the Carolinas called Tryon, North Carolina. That is where our friends Frank and Debbie of StreamingTogether decided to retire at their former vacation home in the woods. 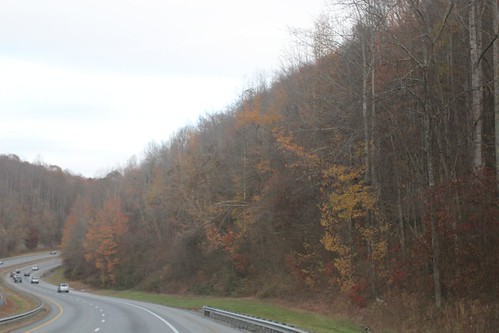 Tryon is only 35 miles away from Asheville and across those miles, you decent about 1,000 ft in elevation in the Appalachians. All around the Smokey Mountains, including Tryon, is where the Cherokee tribe of Native Americans called home. They have populated this area dating as far back as to the ice age in 10,000 BC. 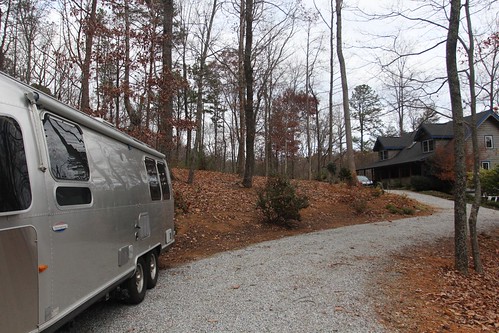 Frank and Debbie’s cabin sits on about 4 acres of wooded hillside. It is a beautifully constructed, modern log cabin. To call it a cabin is actually a bit of an understatement. It is bigger than any house I have ever lived in. 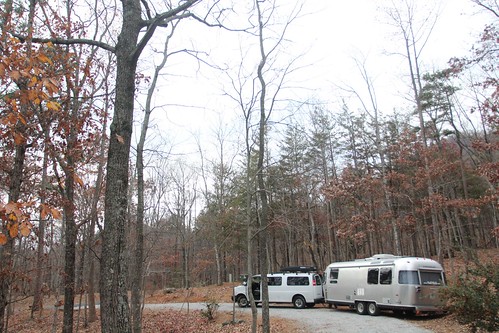 The road that leads into the cabin is graded but consists of mostly loose gravel. When Frank first brought ‘Diva’, their Airstream, here earlier this year, they had no experience maneuvering it in a place like this. They got it into a bit of a precarious situation and needed to be rescued by roadside assistance. I was not going to make that same mistake. Actually, I had already made another one on my way here. We had missed the road that leads to their cabin on the way in since it does not exist in my, and apparently any other, GPS. That caused me to climb up a roughly 15 percent grade for about a mile before I was able to find a place to turn around and come back down. Marlene was hyperventilating on our way down and later she admitted to thinking that she thought that was it for us.

We parked near the entrance of his drive way against a hillside. It is a great little spot against the woods. Once we were tucked in, we were pretty much level and cars can still drive by easily. This spot will be made even better in a couple of days because Frank is having one of his neighbor’s bobcat come by to carve out an dedicated Airstream parking space. 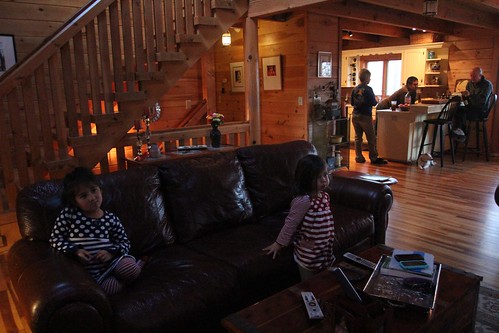 The girls loved being inside a log cabin. They loved even more that they have cable TV so they can watch their favorite channel, Nick Jr., on a comfy couch. 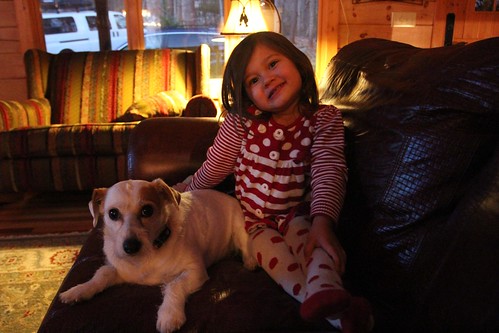 It didn’t hurt that their dog Rosie also enjoyed the company of a couple of little ones chasing her around the house. I think it isn’t going to be long before someone is going to ask for a puppy for Christmas. 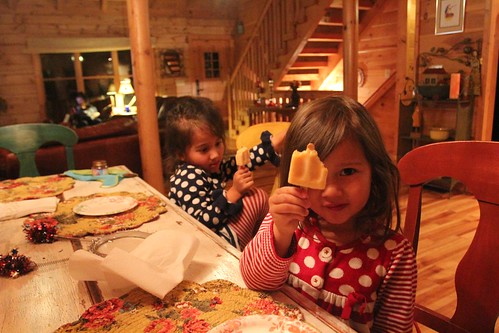 Just when they thought things couldn’t get any better, Frank and Debbie busted out popsicles for them. I think these two have some experience spoiling little kids. What do you think?

Great post, Dan & Marlene. We loved having the kids here. Oh, and the two of you also.

The parking spot for Airstreams (or any RV up to about 32′) is almost ready. So we can offer a few nights courtesy parking for the asking. We can offer water and 15 amp electric. When we are finished it should have relatively easy in and out. We have also removed most of the loose gravel and are about to place crusher run (crush & run, also called ABC) to the hilly parts making it easier to park near the house. If any one is interested contact me at kiddoc1@mac.com

We love following your blog, Facebook posts, Twitter, Flickr….. How do you do it all with 3 kids, work, home schooling, sight seeing and everything else you do?