Day 2: A Long Drive to Flagstaff.

Our night at Pioneertown was blissful. Although we had slept in the Airstream the night before in the parking lot of Morongo Casino, last night was the first night we had electric and water in months. We watched TV, cooked breakfast in the morning and tried to use everything to make sure that they all still worked. 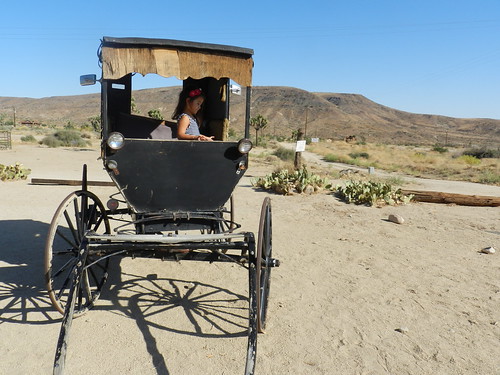 This is an old wagon on the property of the Pioneertown Motel. Ava is reminiscing of how our 19th century counterparts saw our country on wheels. At least that’s my take on this picture.

Our plan today is to head east on the little desert road CA-62 to catch the 95 and finally to I-40 and head to Flagstaff for the night. 369 in a day isn’t a terribly long day for most people but since we can’t drive as fast as we would like to, and we have to make occasional stops for the girls to stretch their legs, it’s probably gonna take us all day to get there. 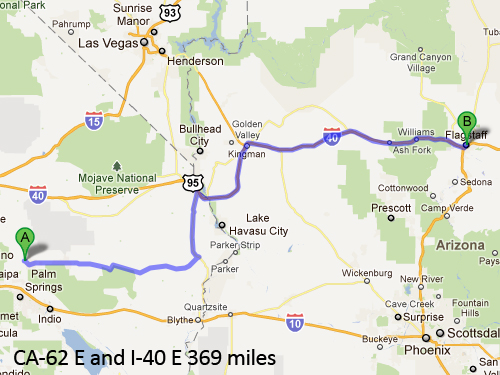 After heading out of Pioneertown, we made a quick stop just a few miles away before the Joshua Tree National Park entrance. 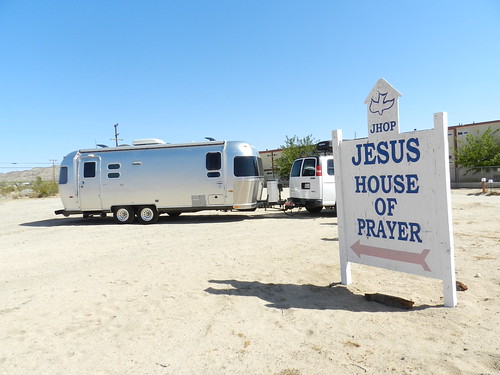 We were going to stop and pay a little visit to the Joshua Tree Inn, where the late folk singer Gram Parsons died from a drug overdose. 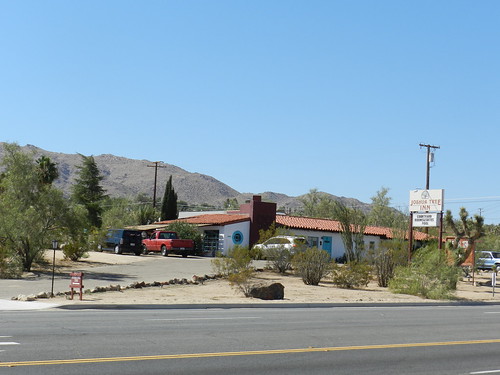 Even though he passed away nearly 40 years ago, there still is a small shrine outside of the room where he died. 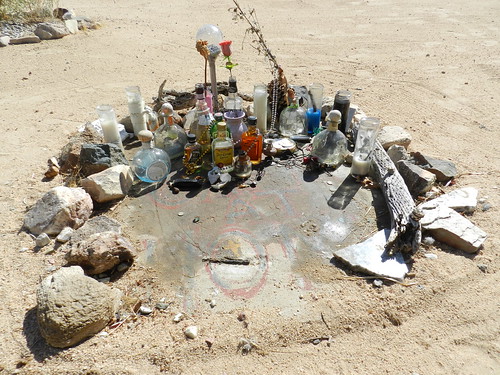 In reality, we didn’t stop here to see the shrine. Marlene’s brother who came last night to see the Folk Yeah show at Pappy and Harriet’s stayed here last night after the show. It was the girls’ chance to see their favorite uncle before we continued east on our adventure. 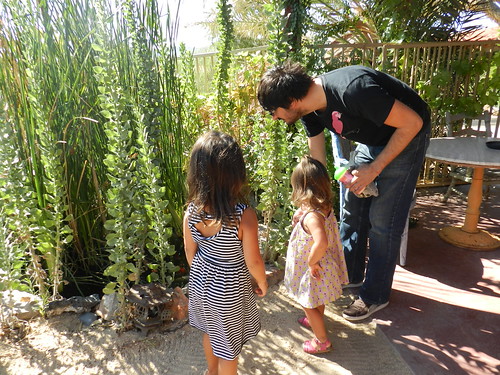 Of course we can’t start a long day of driving without a little ice cream for the girls. Kind of like grease for these two little squeaky wheels. 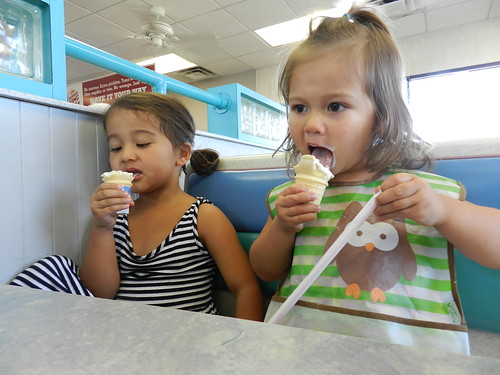 Driving across the desert is my favorite kind of driving. Two lanes, hardly traveled roads with vast expanses of terrain as far as the eye can see. It is one of the best things about transit days. 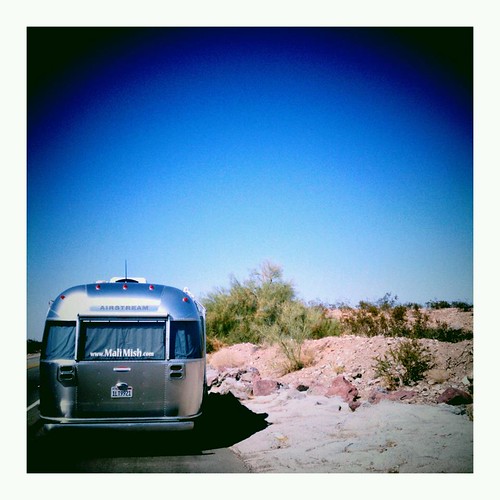 When we finally got to I-40, we crossed the might Colorado river and into Arizona. 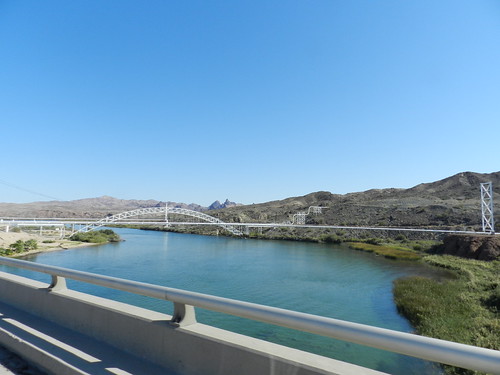 Every time we cross a state line, I always give Marlene a little heads up for her to grab a pic of the welcome sign. It is much harder than you think. Especially with point and shoot cameras trying to snap a photo outside the window of a moving car. The seemingly insignificant delay from when you press the button until when the shutter finally goes off feels like an eternity when you only have a small window to get the shot. I’d have to say, she nailed this one right on the head. 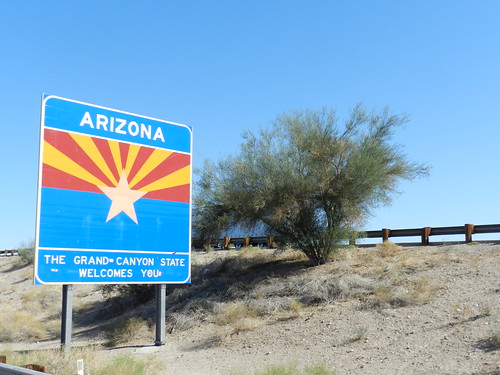 When we drove back from Grand Canyon last year on the last leg of our trip, we had to make an afternoon stop at the Kingman KOA due to a massive heatwave. They allowed us to park and hook up to a site for $20 without spending the night. We called again this time as we drove through Kingman and they quoted us a $5 per hour rate which ended up being better for us since we only planned on spending 2 or 3 hours there. 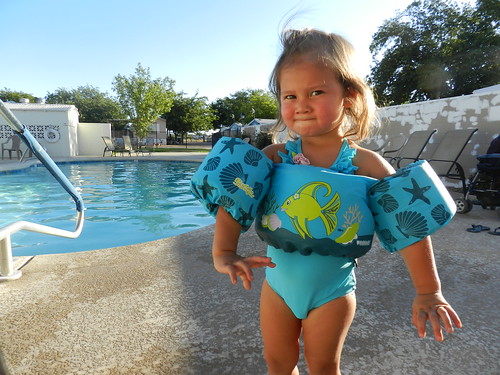 Even though it is fall, the temperature is still warm enough for the girls to get one last dip in a pool before we have to retire their floaties for the season. In fact, the water was actually warmer than the air probably due to it being heated up all summer by the desert sun. 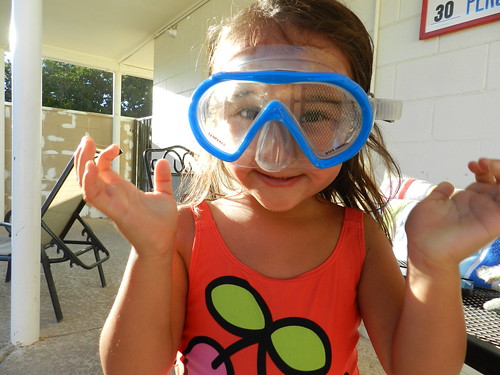 Since we got back from Croatia, Ava has been really loving swimming with her mask, flippers and snorkels instead of using her floaties. I guess she is growing up 🙁 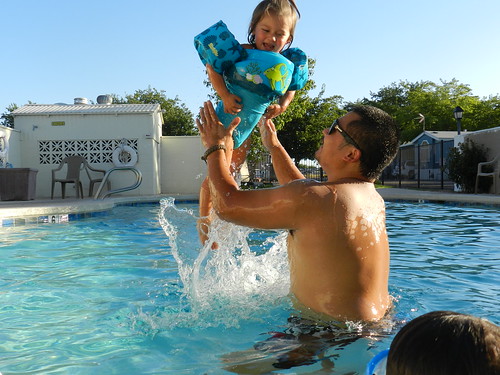 Mila, don’t you grow up too fast!

Wow. Was that a compliment from Dan?!?!