This morning we were greeted with these geese at our door step. I don’t really know what kind of geese they are but they sure were friendly. 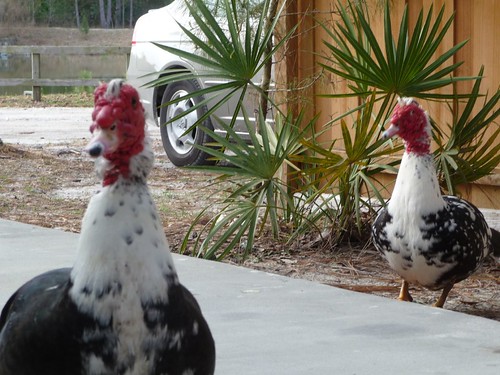 Today was our only full day here in Weeki Wachee. And we knew exactly where we needed to go. Weeki Wachee State Park to see the mermaid show. 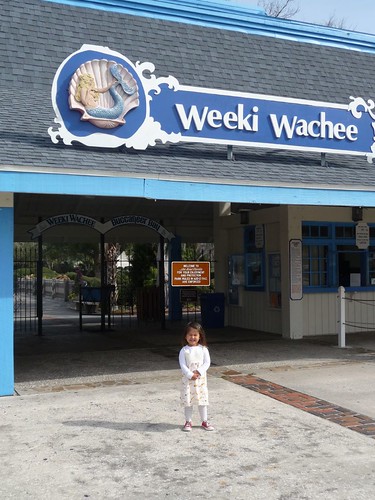 Weeki Wachee has been putting on mermaid shows since the late 1940s. The show is performed in a natural spring year round where the performers dress in mermaid flippers and breath using air tubes placed at the bottom of the spring so they never have to surface for air. The park was not always part of the Florida State Park system. It was actually privately owned for many years. When Florida decided to designate the spring to the state park system, as the mermaids were right in the middle of the area, they incorporated them into the attraction. 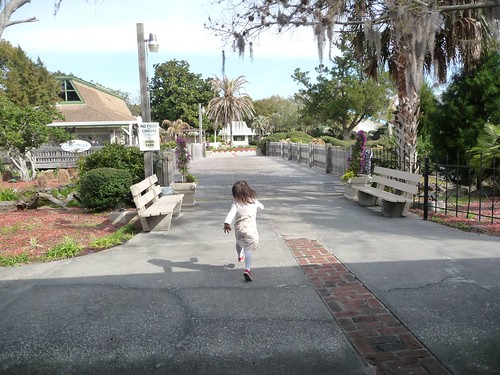 Of course we didn’t tell Ava that. For all she knows, this is where Ariel lives. Can you tell she is excited to see the show? 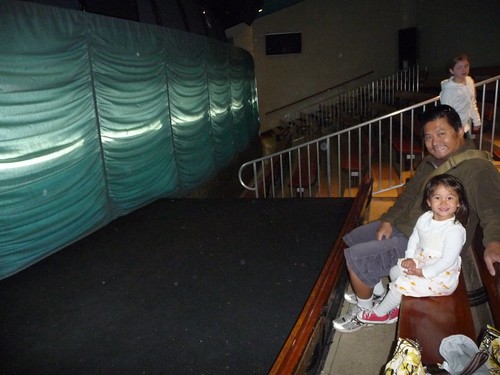 The theater is built right up against the side of the spring in a space that is underground so the viewers can see underwater through a wall of glass. We were one of the first ones to get there so we got the perfect seat front and center. During the summer months, this place is packed full of visitors to see the mermaid show and also to visit the country’s only water park fed by natural spring water. At the start of our show, we probably had about 1/3 or 1/2 of the theater full.

The original show performed here at the park is sort of a generic mermaid show where they swim, dance and sing under water. In the recent years, they have added a new The Little Mermaid show which works in the story line of the well-known fairytale made famous by Disney’s movie of the same name.

You would think that Disney would jump all over this as a trademark infringement of their property. Except the original story of The Little Mermaid dates back all the way to 1837 and written by a Danish writer named Hans Christian Anderson. That means it is actually now in the public domain. The crew at Weeki Wachee are well aware of it and refers to their show as Hans Christian Anderson’s The Little Mermaid whenever the name in the show is mentioned. Surely they do not want to be on the receiving end of the wrath of Disney.

The more well-known version of the story by Disney takes some creative licenses and deviations from the original so those aspects of the story are not part of Weeki Wachee’s performance. That means the Little Mermaid’s name is not Ariel and her friends Flounder the fish and Sebastian the crab are nowhere to be found. 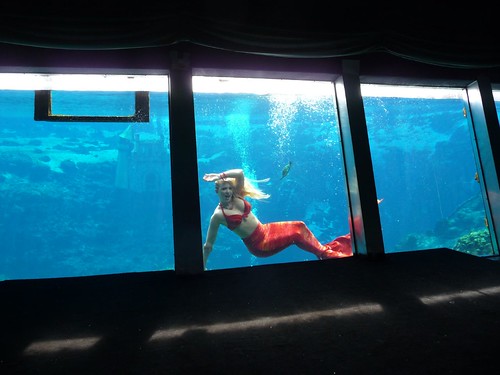 All of that didn’t matter to Ava once the curtain lifted and a ‘real-life’ mermaid glided right across her eyes. 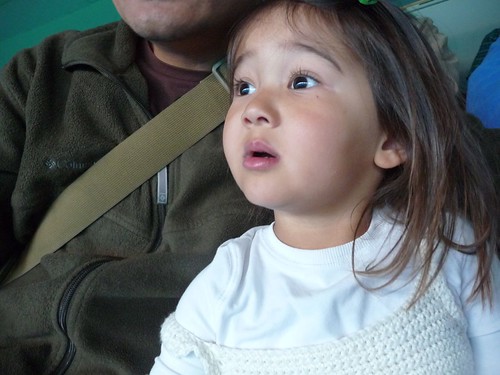 She could not believe what she was seeing. 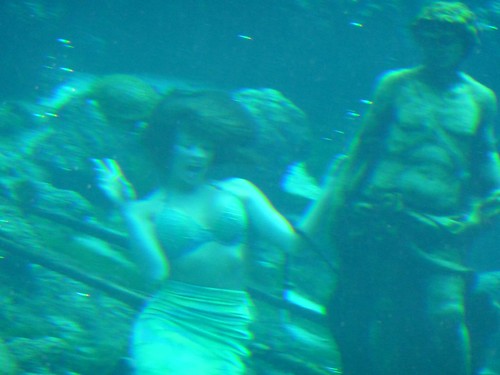 There is an audio soundtrack that plays in the theater with dialog, songs and music. The performers can hear it from inside the water so they are able to lip sync along. 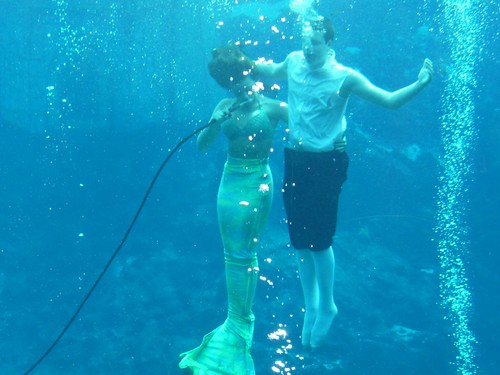 Here is the Prince that went overboard from his ship. No, it’s not Prince Eric. He is just ‘The Prince’. 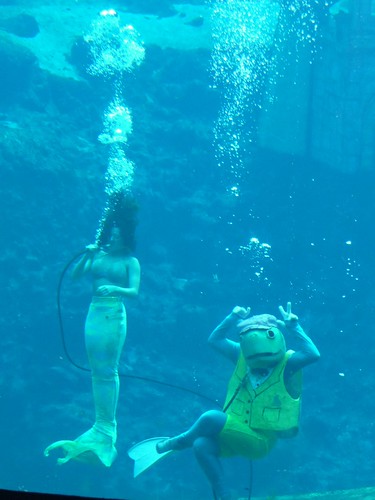 And here is the Little Mermaid’s friend the sea turtle. Yeah, I know, this is probably the most hokey part. Ava was a little confused and kept asking why Ariel is swimming with a frog. Ummm. I don’t know. 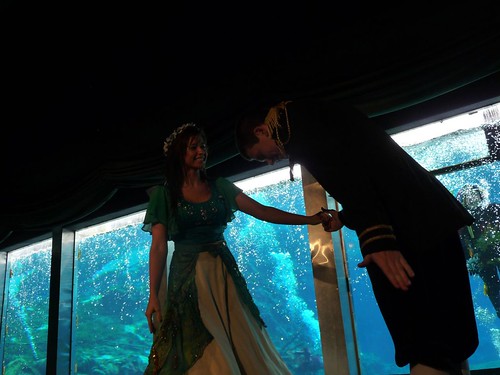 During a part of the show, a couple of the performers came out of the water and into the theater for a dance on the stage right in front of us. Ava was again wide-eyed and speechless.

After the show ended, Ava got to take pictures with a few other ‘real-life’ mermaids right outside the theater. They were very impressed with the mermaid dress that Ava was wearing from her 3rd birthday party themed after Disney’s The Little Mermaid.

Here is the culmination of 2 of her most favorite things: A mermaid and the color pink.

I got in on the action and posed for a picture with her as King Triton. (Actually I think this is King Neptune but Ava doesn’t know who the heck King Neptune is so Triton it is.) Looks like someone stole his triton right out of his hand. Notice the empty hole in his left hand?

Part of the park entry fee also includes a 25 minute boat ride down the river starting just past the spring where the mermaids perform. The entire river is no deeper than just a couple of feet and the water is a nice 74 degrees year round and crystal clear. There is so much water coming out of these springs to create a 5 mph current that pushes boaters and kayakers down stream.

There are lots of wildlife in these parts of Florida and much to Marlene’s delight, there are lots of birds. Just a few days ago, we were talking in the car about the iconic American Bald Eagles and she wondered how hard it would be to find and see one in the wild. We have seen them in captivity. In fact, Marlene has handled one in captivity at the rehab center near our house where she used to volunteer. 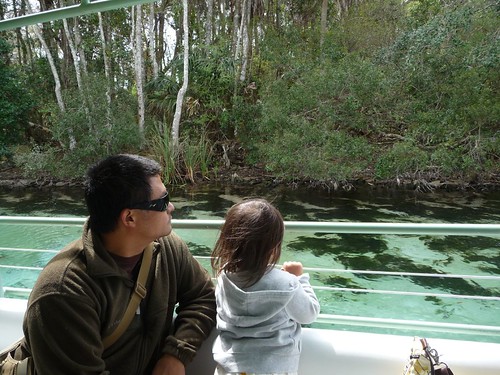 Could you believe it? Today, we got to see one. There are a couple of American Bald Eagles that have built a nest here right along the river. Here is one of them on the lookout for some food for the little ones. 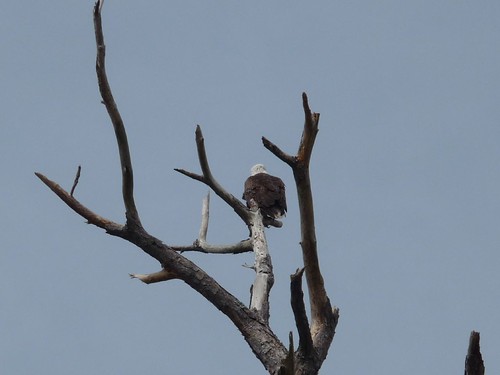 So now we have 2 out of the 4 of us that have fulfilled a life-long dream. What about the rest of us?

Well, Mila will have to be content with having her first tooth on the verge of busting out of her gum.

I, on the other hand, am lucky just to be on the trip of our lives!

The ducks in the first picture are Muscovy Ducks. They are pretty friendly…or grouchy, depending on whether you have food 🙂

The day we went up to the Mermaid show, they had to cut it short because a thunderstorm moved in. It was a lot less cheesy than I’d expected. There were a lot of Manatees in the river that day too.

I remember going to Weeki Wachee every time we went to Florida (in the Airstream naturally), the last time being the mid 1970’s. We will have to go again. Where are the pictures of Dan with the mermaids?

Isn’t it amazing how the mermaids haven’t aged a bit in over 60 years! 🙂 There were only turtles in the spring during our show and they were constantly swimming at the mermaidss faces to the point where they have to shove them off. I wish I had taken a pic with the mermaids too but I don’t think Marlene would be too pleased 🙂