As the title of this post suggests, we now have each been issued a 49 square foot space in the Airstream that we can call our own. Actually it will be less than that because the toilet, shower, fridge, oven and all of those niceties are talking up much of those precious space inside the aluminum walls of our soon-to-be-called home. 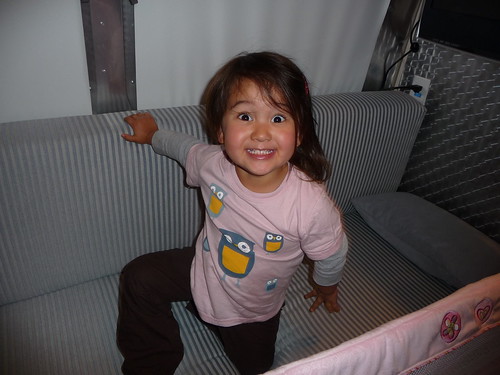 Ava staking a claim in her corner of the Airstream

OK, maybe subdividing is not the most efficient use of space and we probably should learn to share. Being that we are now 4 people strong as a family, we are, more so than ever, running out of space in our 25 foot long Chipotle burrito. That is not even counting Yoda the cat who will surely need her own space to do whatever it is that cats do when they go on an Airstream road trip.

When we first started road tripping as a family, we only had one child who was 11 month that barely walked. We just had a little T@B tear drop trailer and had dreams of traveling the country by land. That dream is slowly becoming reality and we are now less than a week from unplugging from the grid and rolling away. 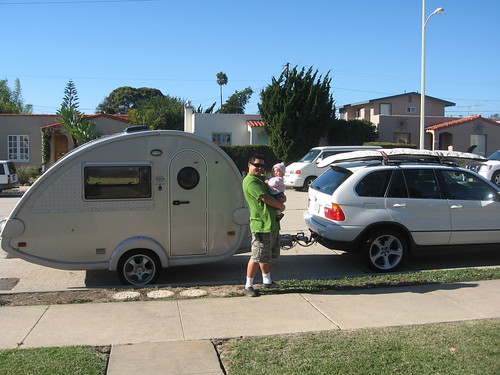 Now that we are bigger and badder, we are having a harder time trying to figure out how to keep things to a minimum. Having a toddler and an infant, they do not play with the same toys. Actually, Mila is barely playing with any toys at all. She is just starting to grab at objects. By the time we get back, she will probably be ripping Ava’s toys right out of her hands and causing a riot in the process. That means we need to have all of those transitional learning tools handy for her to grow, learn and progress during this trip. It seems that the more we think about what we need, the more insanely long the packing list becomes.

I know the right thing to do is follow the K.I.S.S. mantra. For those who don’t know the acronym, it stands for ‘Keep It Simple Stupid’. Fairly self-explanatory, I thought. As easy as that might sound, it is a very hard concept to commit to. Everywhere we look around the house, we see items that could come in handy. But the reality is that we will make do without 99% of this stuff. After all, isn’t that the reason why we are heading out on this trip? Get away from all these earthly belongings that do nothing but clog up space? People in every corner of the world live on a tiny fraction of what we do here in the U.S. and somehow manage to enjoy their lives just as much if not more. I have a sneaking suspicion that the more stuff we end up packing into the Airstream that is suppose to help us with life on the road, the more it will actually hinder it and get in the way.

That is a very liberating thought and proclamation. Will I be a testament to the K.I.S.S. concept of road living? Well, I will try, but probably not. I am sure by the time we shut the doors and lock the dead bolt, we will have a trailer and van full of crap that we just ‘can not’ go without. I guess we will have to learn this one by doing instead of taking the advice of the wise ones that came before us. With that said, I am headed back into the garage to see what else we might want to bring.

The girls are all sound asleep. I’d better be quiet. 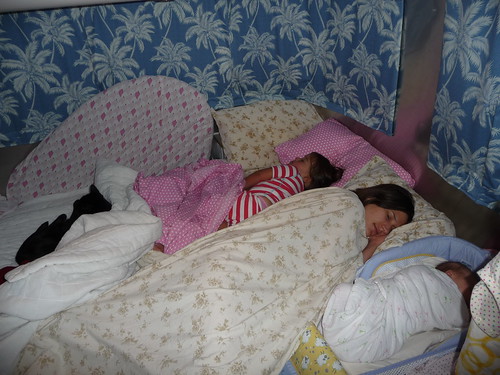 over and out,
dan
(whispering….)

What an exciting time for you guys!!! I totally know what you mean about packing it all up and trying to keep it simple!! We are going to Europe for an extended trip with a 7 yr old and a 1 yr old, and trying to figure out what we really ***need*** to take!! As you said, the the KISS rule is easy to say, but very hard to do with 2 kids in tow!!!! There is always that ‘thing’ that will make life so much more easy, but takes up space and weight! In the end though, all you really need are your lovely fam & a sense of humor to have a great big trip (yes, I know there’s more ;-)!!! Wishing you guys a great time!

Final Week before Lift Off.

We are down to the final stretch before leaving our possessions and family behind. We are filled with excitement, last-minute jitters and, ever so slightly, a bit of doubt. OK, maybe doubt is not the right Read more…

Upgrade Your Airstream with Bright, Efficient and Durable LEDs.

Getting your trailer ready for some serious boondocking usually calls for some type of replenish-able, off-grid power source like adding solar panels and a generator. However, power generation is only 1 part of the formula Read more…

Last night was our first night in the Airstream as our full time home. Because of some problems with our buyer’s lender, they had to extend their escrow closing day. You’d think we are glad Read more…