I did some research before buying the Airstream about what kind of hitch to use to drag it around the country. Since I have only ever towed trailers that I can push around with my hands, the 7000 lb beast is a big change. With an 800 lb tongue weight, it is also 300 lbs more than what my class 3 hitch is rated for. Bad news right? Well, that’s where the weight distribution systems come in. By using a weight distributing system, my class 3 hitch can increase its capacity to accommodate up to 1000 lbs of tongue weight and 10,000 lbs of trailer weight. Magic! 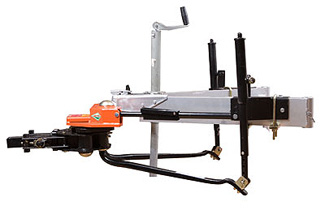 These hitches essentially use leverage created by solid metal bars that extend from the rear of the hitch to even the weight across all 4 wheels of the vehicle. There are people who will go on and on about how these work but I like to think of it as a wheel barrel. The handles of the wheel barrel are the metal bars and it takes the weight off of the back and moves it to the front. If you want to find out more, do some searches on the wide wide world of web. There are people who will tell you a lot more about it than I am willing to bore you to tears with.

The other part of the hitch equation is sway control. Imagine yourself driving your car and trailer down the road. You are just trying to keep it between those stupid lines when a big 18 wheeler zooms by and you get a little spooked. Your little jerk to the wheel creates a wave of swaying effects that travels all the way back to the hitch and by the time it gets to your trailer, it is amplified to a monster tsunami.

The 3 basic types of sway control are friction (Equalizer as shown above), cam (Reese) or the system patented by Hensley Arrow. By far, Hensley Arrow is the most expensive version of sway control and is arguable the best/reliable method of controlling trailer sway. Equalizer and Reese basically use friction and mechanical force to dampen the effects of sway. Hensley Arrow on the other hand uses an engineering concept to transfer the center of pivot farther forward in the tow vehicle to eliminate trailer sway.

Here is a more detailed explanation I found online about how it works. Also a YouTube video by some MIT engineering student explaining it with LEGOs.

Are you crying yet? I know I am. This stuff can bore you to death but I have no choice but to figure out what to get before we go out on any extended trips. I was impressed after having done some research of the Hensley Arrow so I gave them a little call to see about ordering one. Since they are factory order only company with no other distribution, you would imagine their are able to cut a lot of costs by not paying commission to the dealers. You would think that. You would. But you’d be wrong! They want $3,000 for that sucker!!!! That is 6 times the price of the other versions.

I’ve seen them in person and it is an impressive piece of engineering. Very heavy duty and well made. But at the end of the day, it is just a few hunks of metal. They offered to send me a video that demonstrates how it works for free so I figured, sure, why not. The least they can do is to spend a couple bucks and send me a DVD so I can check it out. Aside from the fact that the video was most likely released on betamax during its initial distribution, it uses all kinds of fear-inducing tactics to scare the wallet out of your pants to get you to buy one of these. I couldn’t deal with it any more. It was too much.

We ended up going with the Equalizer system for a few reasons. One is that it is a simple system with the least number of parts so the points of failure is reduced to a minimum. The other is that it has much higher ground clearance. The most important of all, it was a lot cheaper than the Hensley Arrow. How much cheaper? $3,000. That’s because dealership offered to throw it in for free when we bought the trailer 🙂 . OK, fine, that is probably the only reason we chose it.

Here is Aaron from the Airstream dealership showing us how to use the hitch. 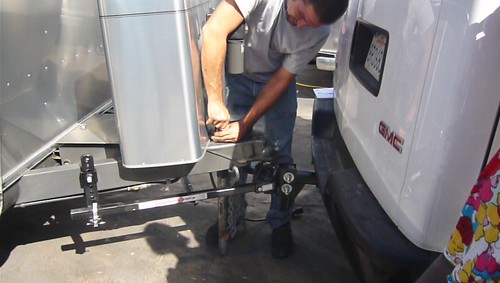 So far so good. Although we’ve only used it to tow about 250 miles home, it has worked well so far. And that’s all the way through LA traffic which is probably one of the worst places to tow a trailer. We are going to be towing it through some winding mountain roads this weekend as well as on an Interstate freeway with lots of big rigs. Wish us luck!

[…] Once we moved up to the Airstream, we had to make all those adjustments to the tow system. I have blogged about the Equalizer tow hitch we chose to use which has been working great so far. A few more upgrades to the van were made to […]

For those of you who have been following our cross country Airstream adventures over these past few years, I’m sure you have noticed a theme with the babies. Yes, they are cute, obviously, haha… but Read more…

A Look at Our Solar Charging System (Video).

During our last visit to the shop, we asked the guys at C & G Trailers to install our solar system for us. But rather than buying a complete turn-key solar system, we did some Read more…

Enough of this techy stuff. It’s time to soften up this blog a bit!! I am a huge fan of Etsy. As I am of Anthropologie. And this week my heart broke a little when Read more…