Leaving Croatia for the coast of France

Hi again. It’s Marlene from Mali Mish. I’m going to catch you up on our summer adventure to Ireland. In today’s blog, we are finally leaving Croatia (June 2021) and headed to the northern coast of France! 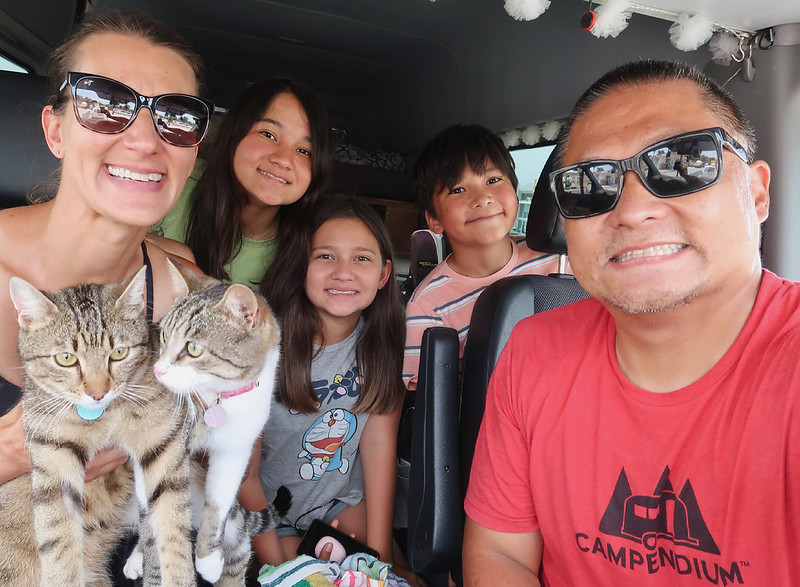 Before officially adopting Twin and Toby, the cats were super antsy in the van on driving days. They were constantly moving around the van, unable to fully relax. On some days, I even had to throw them into their cat carriers to avoid distracting Dan. But as soon as we left Split at the end of June 2021, they somehow figured out how to enjoy the ride. And a good thing too because we were about to put in three long driving days to get us all the way across the European continent to the coast of France. 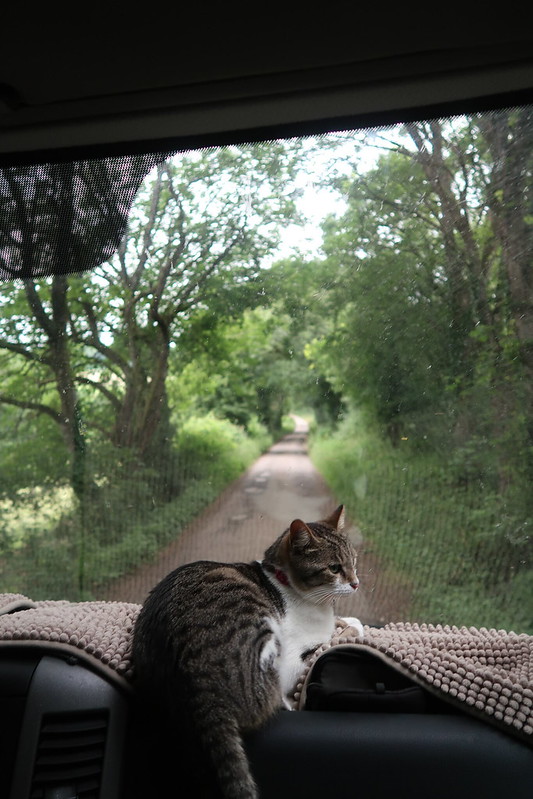 When we got our first real camper in 2008, we didn’t know what our camping style was or that there was even a choice. We thought we had to stay at a campground. Nothing else existed! Ha! But when we started driving cross-country and meeting others who also chose the road as their home, we figured out there were other choices and that typical campgrounds were not for us. In the US, we call it boondocking but here in Europe, they call it wild camping. And those are the type of spots we still prefer. And good thing because those are the types of spots that the cats prefer too. Free, away from others, and closer to nature. 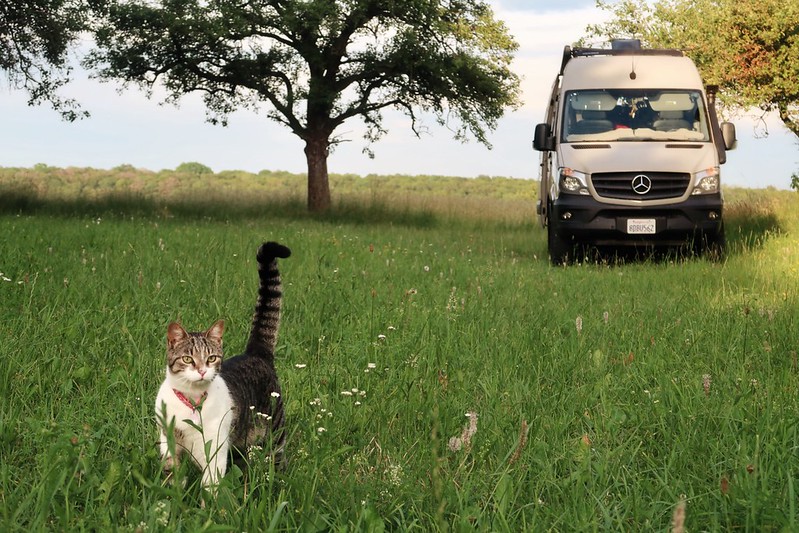 While in Europe, we mostly use the Park4Night app to find places to camp for the night. This is how we ended up at this grassy field at the edge of a forest in Germany. We read reviews others leave on the app before we choose a spot. Occasionally locals or police ask other campers to leave a spot for whatever reason so we don’t visit those spots. But when we do show up to a place that looks like a good fit for us, we listen to what our gut says. If something feels off or not safe for the cats, we pull up the app again and start searching again. And if that app fails us, we use iOverlander or CamperConnect or just end up at a random place for the night. 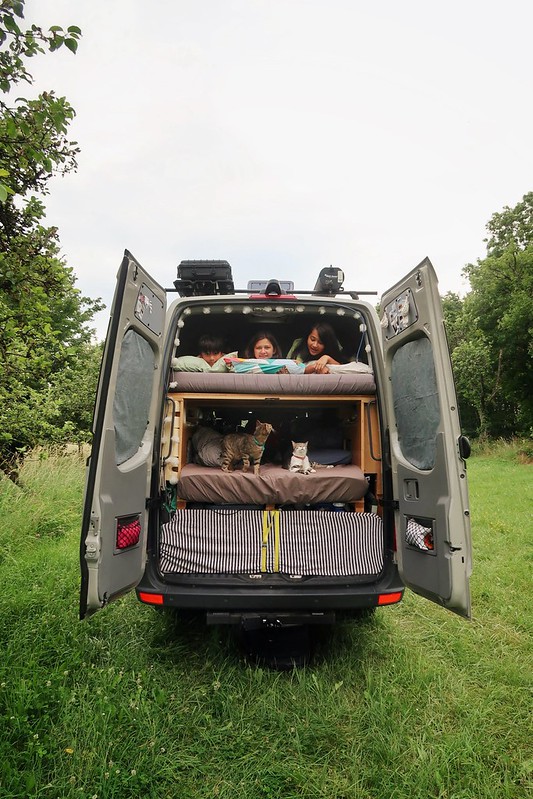 On the day we left Croatia, these two cats turned one. Happy birthday, Twin and Toby! Having the cats sit still for a photo is no easy feat, my friends! The kids all helped draw and design their birthday hats digitally. So cute. 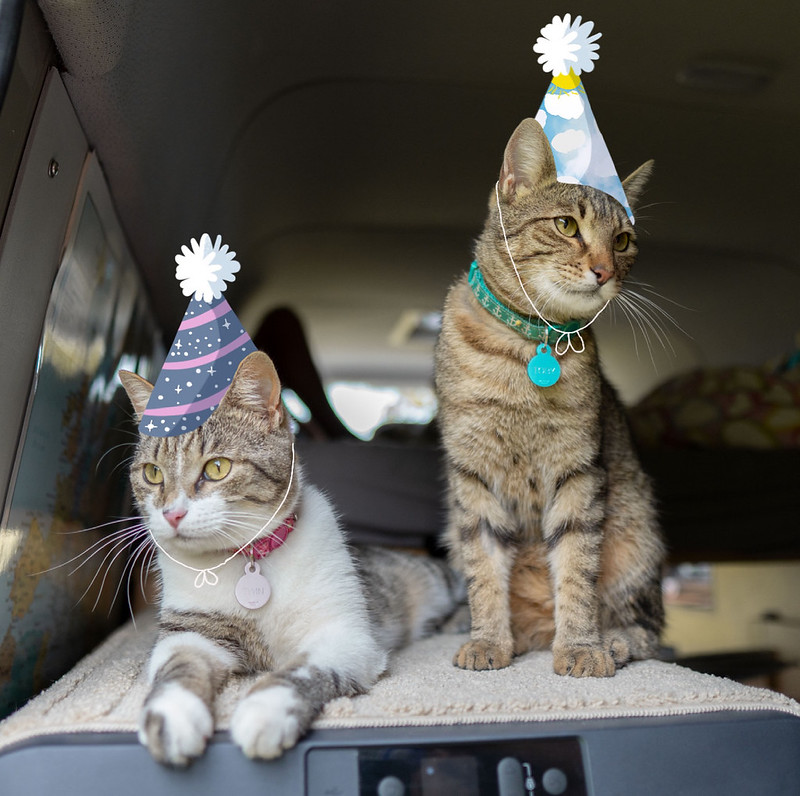 After Germany, we ended in the Champagne region of France. France has a great camping culture and so many villages have camping aires for anyone to use. Some are free, some are low cost. An aire is not a full-on campground. It usually has simple facilities to dump and freshen your tanks. Some even have electricity which is a nice option if there are multiple days of bad weather in a row. 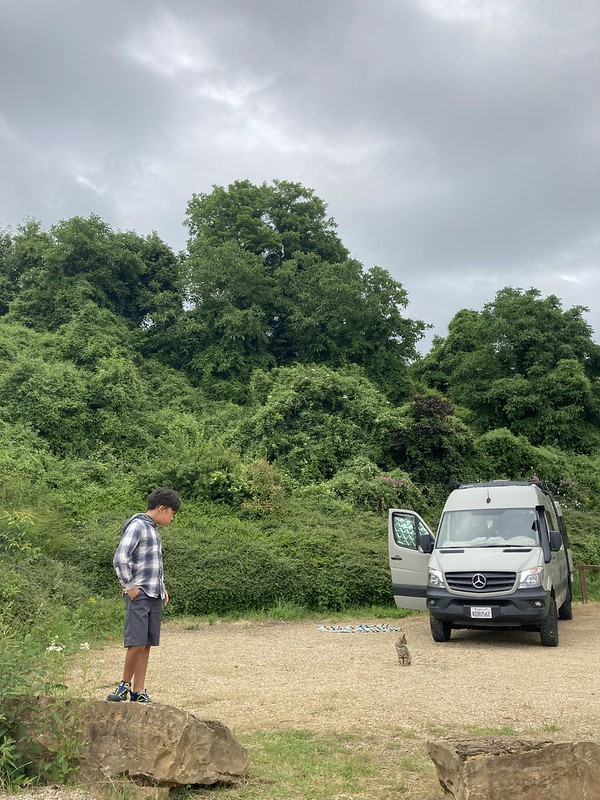 We felt that this aire was quiet and safe for the cats so we let them roam freely. Here is Twin enjoying the vineyards in Champagne. 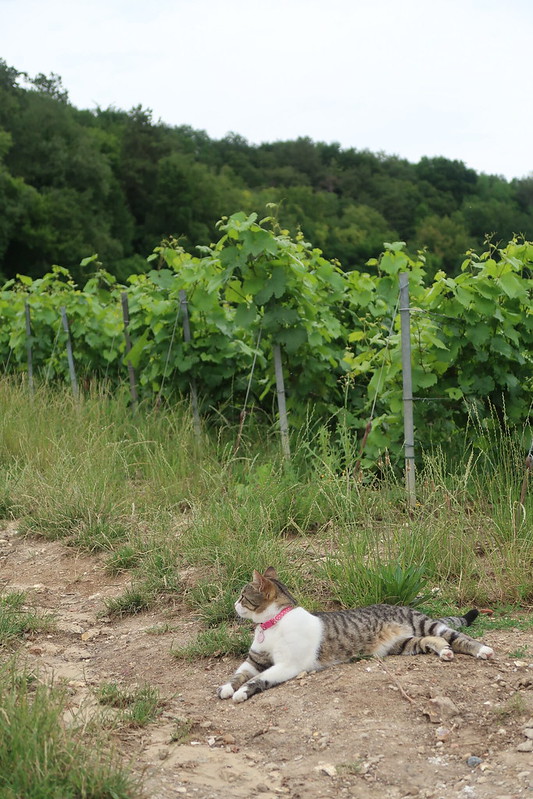 We like to take daily walks, either as a family or as a couple, depending on the situation. Today we walked as a family through the little village of Trépail. We were hoping that one of the local champagne tasting rooms would be open but couldn’t find one. 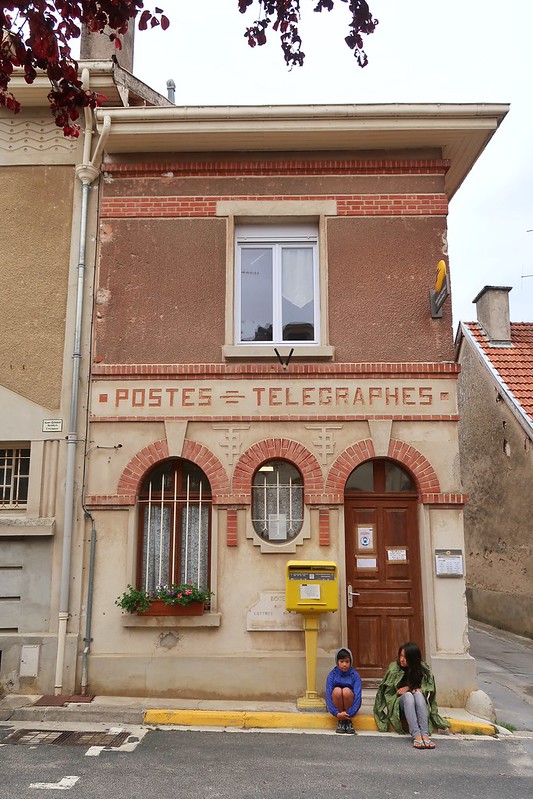 So instead we admired the old buildings and pet as many animals as we could. 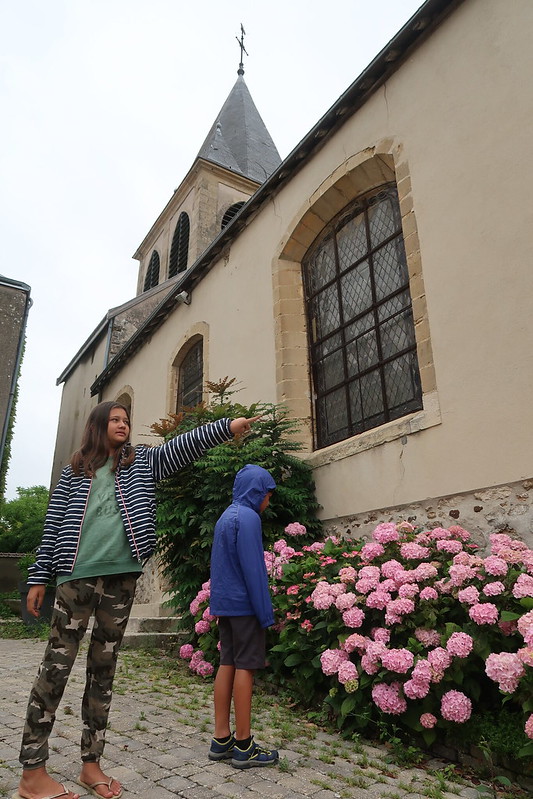 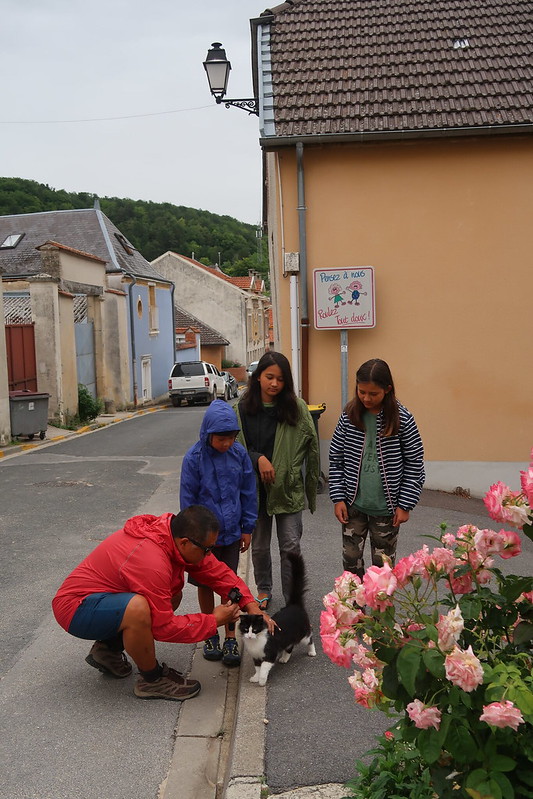 After a couple of nights in Champagne, we found ourselves at another aire. This one was a paid aire on the northern coast of France in a town called Boulogne-sur-Mer. They had an asphalted parking lot with electricity that you can get for an extra fee. We chose to park on one of the patches of grass instead. 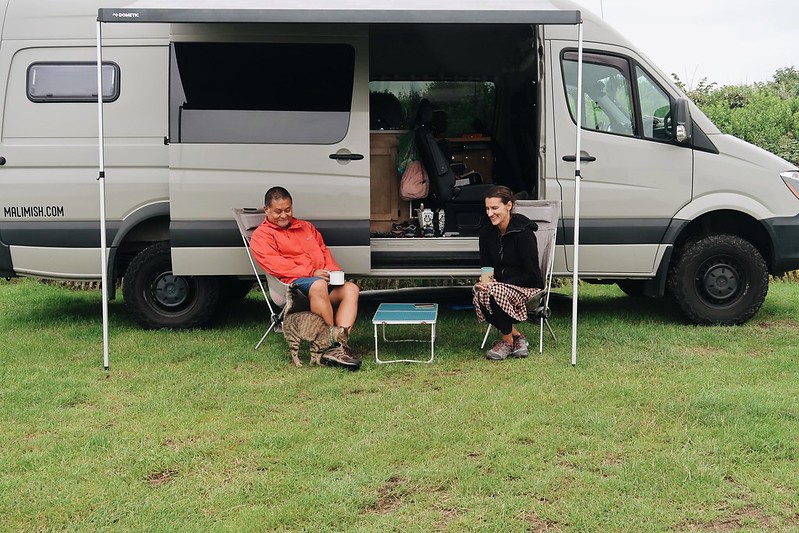 This is the view across from our camp spot. It’s gloomy but so beautiful. We haven’t seen a real tidal change in so long. The Adriatic Sea doesn’t change much. It’s funny how something like a tidal change can make a place feel more like home. 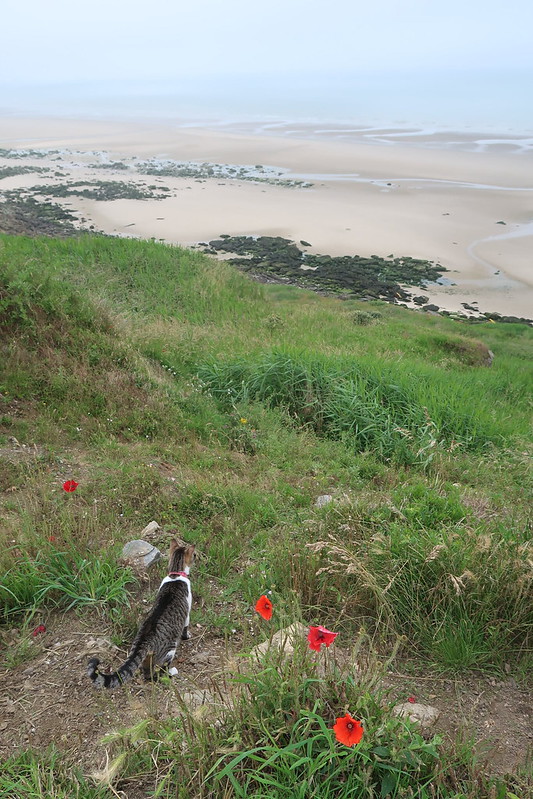 Today’s family walk took us to a set of stairs that gave us access to the beach. 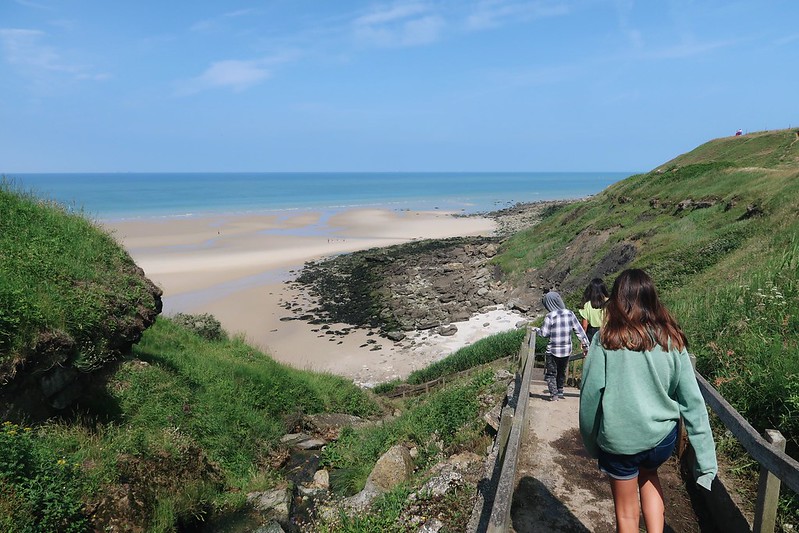 No one in the family can resist dipping their feet in all the bodies of water we come across (except for me). 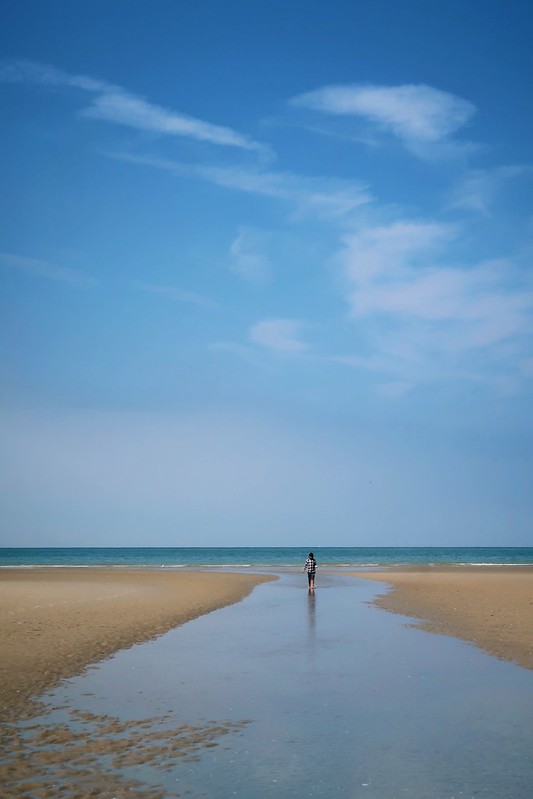 The western coast of Europe is littered with the remains of WW2’s Atlantic Wall. During our first week in Europe back in September of 2018, we visited a site in Belgium that had one of the most intact pieces of the wall. You can read about that visit here but be warned. The post also includes the loss of our old cat Yoda. 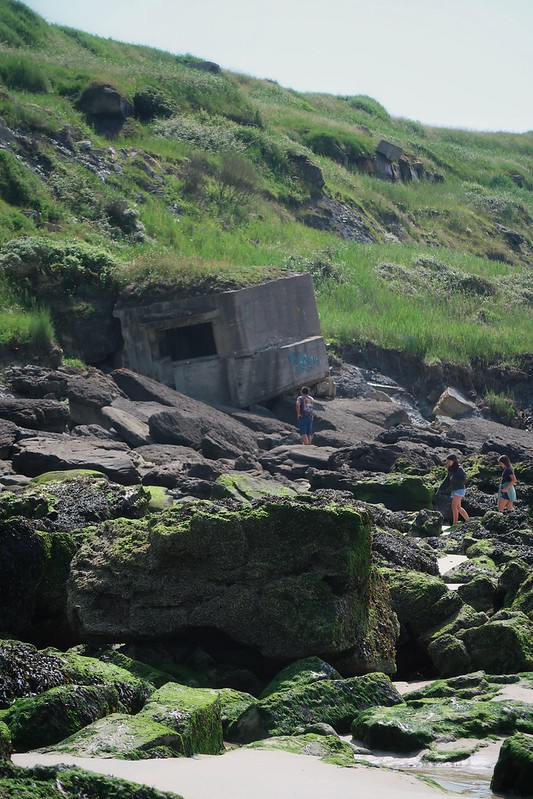 A local French man noticed all the photos I was taking of the family and announced that he was an amateur photographer and that I should be in some photos as well. After snapping a few photos, he told us all about growing up here in northern France and collecting little pink shrimp at low tide. Within minutes, he gifted us all of his collected shrimp but we had nothing to put them in… except for Luka’s wet socks. So into the socks, the shrimp went. Lol. Before parting ways, he professed his love for England and the UK and how happy he was that we were here. We just rolled with it. We didn’t have it in us to tell him otherwise. 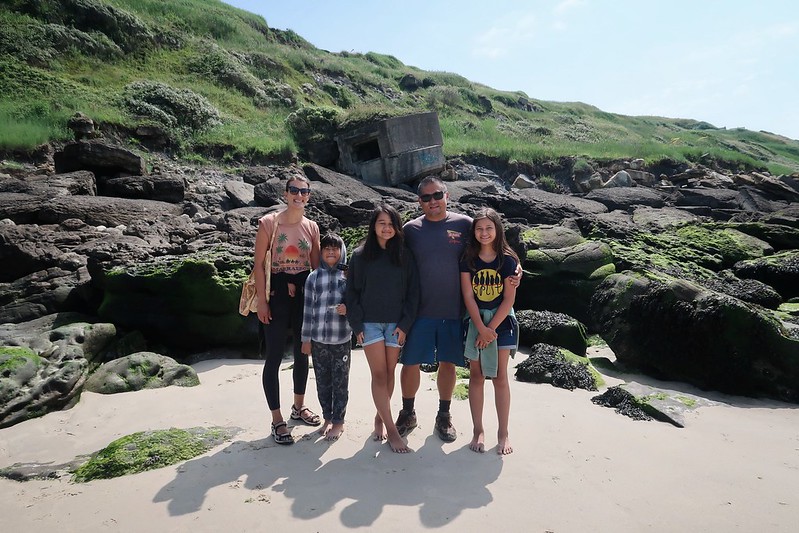 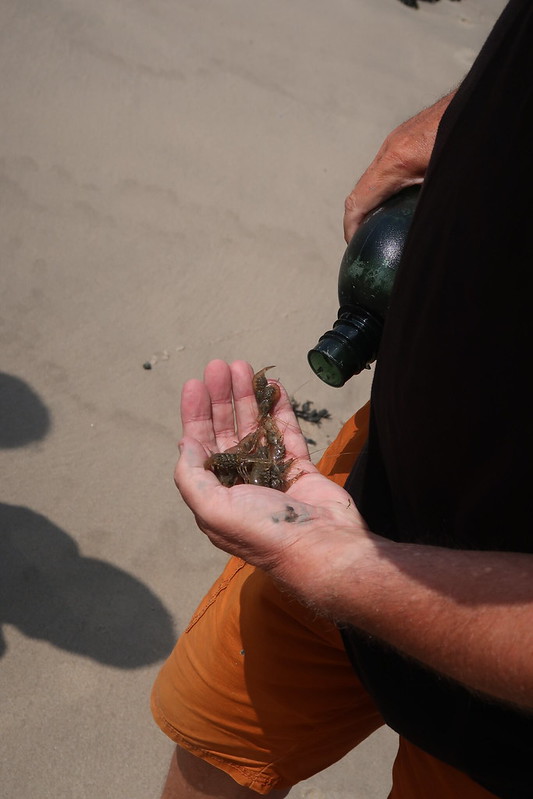 Our driving days are also our errand days. They usually involve gas stations, grocery stores, and bakeries. And depending on the area we are in, it could also include hunting for fresh water and dump stations. Our non-driving days look like this. Slow days together, exploring what’s nearby and trying to make a dent in our food supply. Now that we’ve rushed to the coast, we are purposely slowing down. At first, it was for the good of the cats but it has become for the good for us humans too. 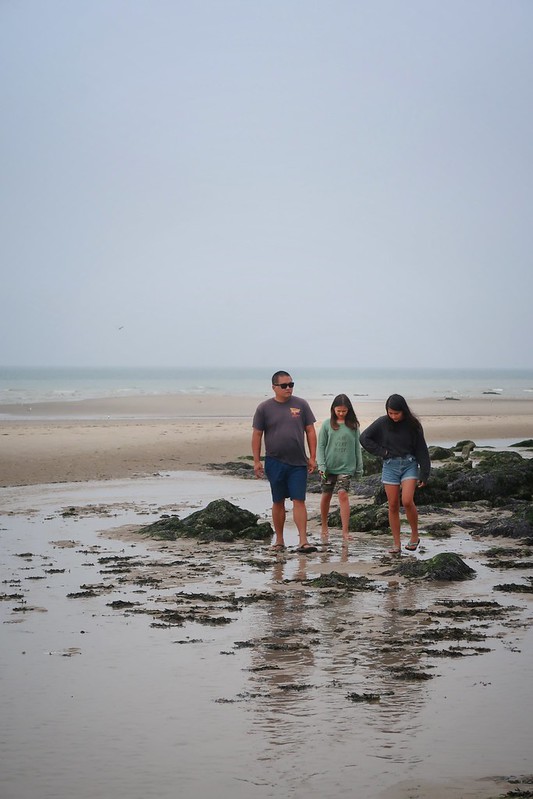 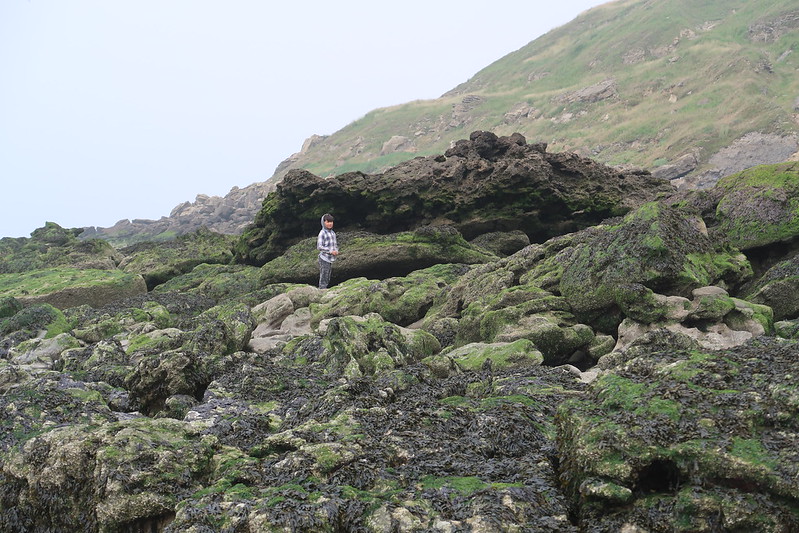 Time to cook up the little shrimps. We all tried them but the shrimp eggs made most of us squeamish so Dan ended up sharing them with our German neighbor. The neighbor in turn shared his snails with us. Dan and he ate sooo many. The rest of us tried one each and called it a day. Ha. 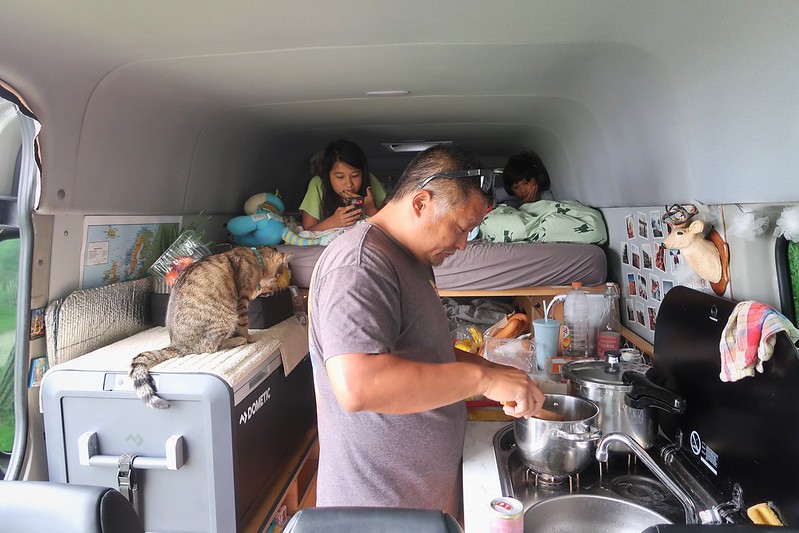 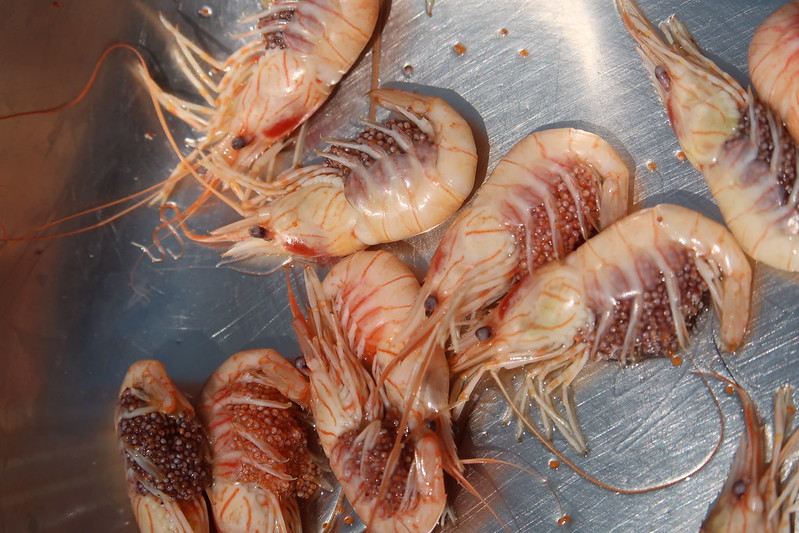 I have a thing for watching the sun set. So off Dan and I went to enjoy some quiet time together while the kids stayed back in the van. We take advantage of a little “us” time whenever possible. 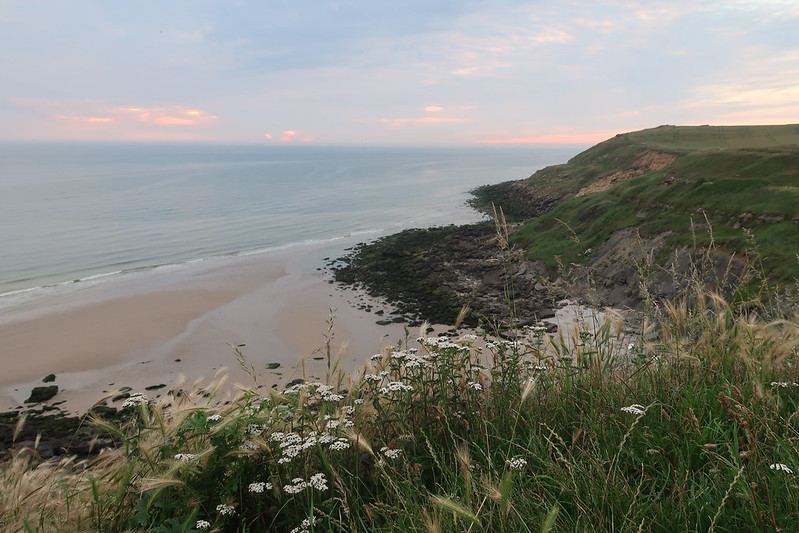 Watch all the videos that Dan created during this part of our European adventure here. 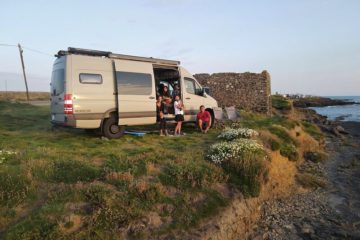 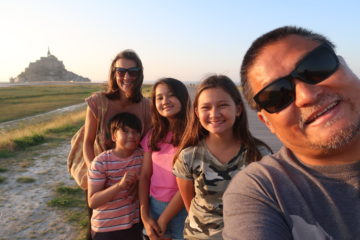 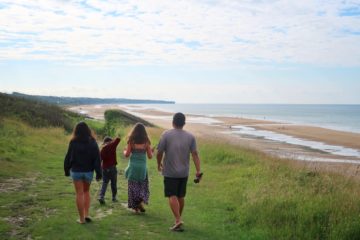